Jessica Ritz is that rare Los Angeles resident who is not a spa and fitness aficionado. How would she survive three days at one of the world's most presigious spas?

ESCONDIDO, California – "I don't exercise outside of hiking a couple times a week, and I have no idea how many calories are in anything I eat," I confessed to the patient, kind woman on the other end of the line who was calling me from the legendary Golden Door spa resort outside San Diego.

I was freakishly nervous. First off, I couldn't remember the last time I had to conduct an interview over the phone as the interviewee, as opposed to the other way around. Second, as someone who's been exposed to the countless health and wellness trends that have originated and flourished in Southern California, my habits are almost reactionary. I have never done pilates. I have at-best dabbled in yoga. I mostly eat whatever I want, as long as Michael Pollan would approve it as "real" food. I still don't understand what the big problem with gluten is. What's allowed on the Paleo diet? Difference between Reiki and Feldenkrais? No idea.

I timed my hike to coincide with the 40-minute-long chat with the guest services professional to make me feel at least a tiny bit virtuous. She and I were loosely mapping out how I'd spend a few days at the Golden Door, located north and inland from San Diego since 1958. Words I'd read on the website such as "journey" and "path" sparked some excitement of possibility, but also a crazy amount of pressure I created for myself.

Unsure of what my goals were, I figured I'd try taking a couple classes that L.A.'s body image and fitness level standards — and my own ill-founded self-consciousness — typically prevent me from doing. I'd even respond to the 5:45 a.m. wakeup call for morning hikes to work on some discipline. Dip into a yoga class or two. Learn more about mindfulness, which has been part of my kids' emotional lingua franca since preschool, and yet I haven't gotten into myself.

Setting those modest, vague objectives helped, because I had an awful lot of anxiety for going to what's a leading luxury spa retreat.

"So, no stress, no guilt, right?" I tentatively asked.

"No stress. No guilt," I was assured. And with that promise, I exhaled. What's probably the biggest, most ridiculous first world problem I had ever faced was settled. 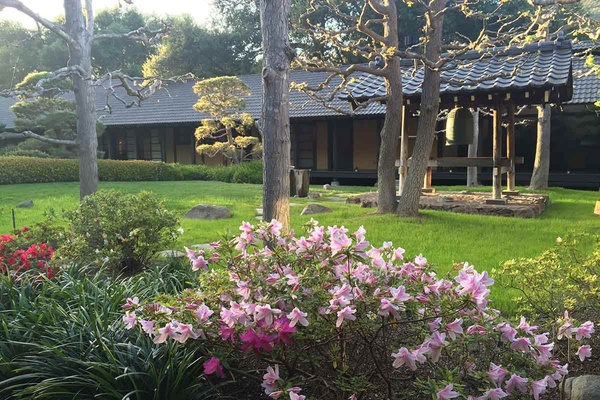 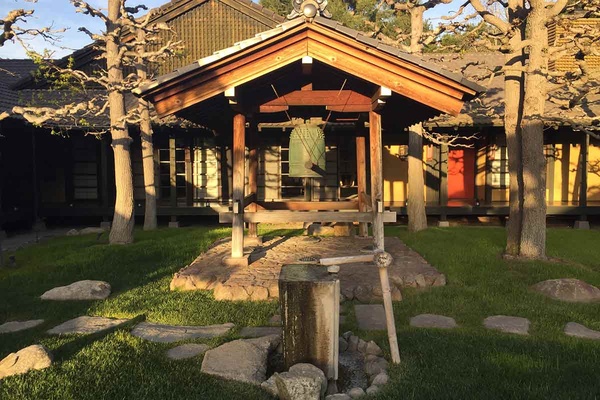 Plenty of space for yourself and your thoughts.

If all else failed, my fancy spa getaway would at least give me a few days away from reality, time to stroll the meticulously maintained Japanese-inspired gardens, sit by the two pools, and read. I packed a tote full of reading material along with the rest of my mental baggage: a stack of magazines, a 600-page Pulitzer Prize-winning novel, an easy-breezy Y.A. book. Having thousands of pages at the ready was a defensive strategy for dealing with another wildcard: fellow guests. When a resort costs nearly nine thousand dollars per week, I start to make not-entirely-flattering assumptions about people.

The welcome orientation talk dispelled the myth that the other ladies lead lives devoted to the daily pursuit of seamless pampering. (Most weeks are women-only, with a few men's and co-ed weeks throughout the year.) We were gently told to learn to let go, which was issued as a challenge to the competent, multi-tasking women assembled, who seemed more accustomed to the role of caretaker-in-chief. So these people do things for other people too, it dawned on me, and I was relieved not to be in the company of literal royalty. We were counseled that it's okay if cloudy "spa brain" takes over. "The Door," as we'd all come to call it, really is a guilt-free zone. One guest said she was there for a "five-star kick in the ass." All right then. Time for me to go all-in.

By dinner I was happily — gratefully, to use Door-appropriate parlance — rocking my flowing yukata kimono, a Golden Door tradition. Such rituals have had time to develop: The spa was founded in 1958 by Deborah Szekely, who today is a 95-year-old health pioneer and activist, and her late husband Edmond, who had already successfully created the spa and fitness retreat Rancho La Puerta in Tecate, Mexico. 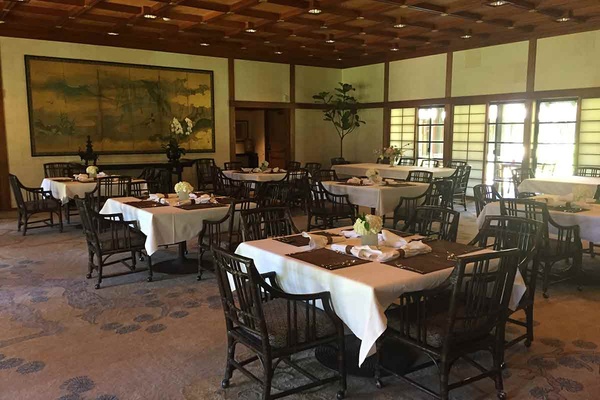 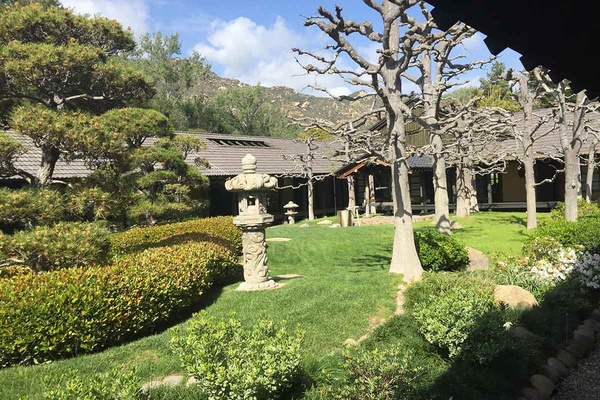 Japanese elements from the dining room to the outdoor gardens.

In fact, by the time I passed through the gilded doors and crossed the bridge into a cocoon-like complex filled with traditional Japanese elements and art, I'd gladly drunk the potassium broth-laced Kool-Aid. It didn't take me long to adapt to the Door's way of doing things.

And what a way the Golden Door has. In a world of high-turnover health fads and design trends, this place has figured it out and keeps improving, which is no doubt a credit to its relatively new owners and the additional land they've acquired. (My god, I wanted to bottle the heavenly scent from the blossoming citrus orchards.) The Door's hospitality approach would wow the likes of Danny Meyer: Nothing meddling, yet every detail as attentive as can be. (A ratio of 175 employees to 40 guests helps make that happen.) Some staff have been at the Door for decades and know guests by name, keeping up with family news — and vice versa. Again, most multi-timers defied stereotyping.

Some women came alone, others with friends or family. Regardless, new friendships were formed. I was privy to incredible personal stories swapped during meals, hikes, and moments in between. I typically don't attend acupuncture lectures or energy-transforming Tibetan bowl concerts after dinner, so all disruptions of my usual patterns were welcome. Never has a better deluxe sleepaway camp for adults existed. 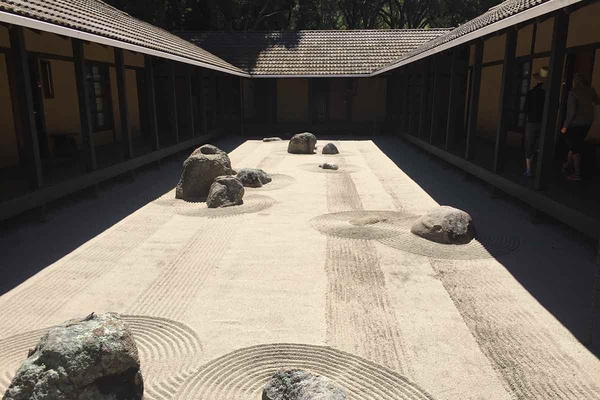 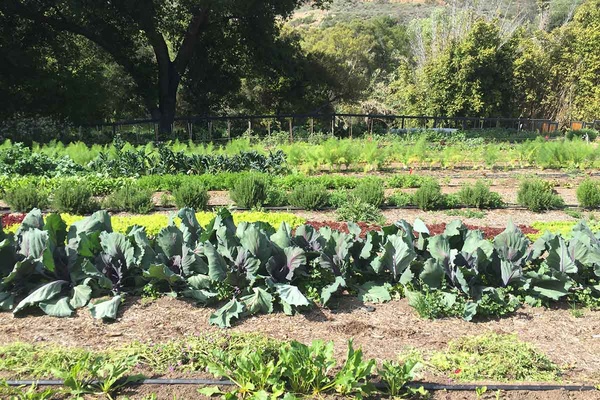 Room for growth (of all kinds).

Visits are usually a full, weeklong program, which makes sense, given the distances most guests travel to reach San Diego County. I booked a shorter package because I feel guilty when I leave my family, and at least one other person showed up later in the week. So there is a bit of flexibility, although I think if you don't start on Sunday it's like transferring into a school mid-year, since it's such a social experience. Occasionally, fervent Door aficionados will stay for two weeks, which strikes me as a fine way to aggressively court the law of diminishing returns. (Unless you're recovering from a major health issue.)

My routine was mapped out for me every day on a paper fan — to be followed religiously or inconsequentially ignored. (I suspect few people skip the daily in-room massage.) There might be no-shows in fencing, meditation sessions, or Zumba, but after a few days, I was comfortable seeing the same crew in our Golden Door-issued turquoise T-shirts and fleece jackets. I stopped worrying about making an ass of myself. Hello, cardio boxing!

Over the course of 72 hours, I had more spa treatments than I've had in the past ten years. As a farmers' market geek, I was excited to learn about executive chef Greg Frey, Jr.'s apiary expertise and passionate efforts to raise bees on the property to benefit the surrounding ecosystem. I toured the extensive, gorgeous vegetable gardens that provide the majority of produce served. During my five-mile morning hikes, I pocketed fallen strays from the prolific avocado trees planted across dozens of acres on the mountain.

"What's not to like?" became my stock response to inquiries regarding my satisfaction. The price tag is hefty, to put it mildly. The Golden Door, however, donates its proceeds to non-profit organizations, with an emphasis on charities benefiting women and children.

Back home with my fitter and more mindful self, new FitBit badges popped up in my email after I plugged my step counter into my laptop. I had hit almost 12,000 steps before breakfast every day. As for the books I had brought to hedge against fancy existential angst and social awkwardness, they remained untouched.

Golden Door is in Escondido, California, two hours south of Los Angeles and 45 minutes north of San Diego. The cost for a seven-day, all-inclusive stay is $8850. Click here for reservations.

The Hotel Is Great, But You Should See the Spa
Yo Amo Mii Amo
The Dog Digs the Spa