This week on Fathom, we're looking at the world's forbidden places – destinations that are hard to get to, are fraught with peril, or simply have really bad PR. North Korea certainly qualifies as all three, for many good reasons. It is not a hospitable place, not even for many of its own citizens. But our goal at Fathom is to deliver the world to you, so we're happy to share the eye-opening experience our pals at Classe Touriste (one of Fathom's Best Travel Blogs of 2014) had when they visited the DPRK.

NORTH KOREA – Step with an open mind into one of the most closed and unknown countries in the world. North Korea is not only wonderfully interesting, but also surprisingly accessible. Curious travelers who want to experience one of the last Communist dynasties should book a ticket to Pyongyang, the capital of the Democratic People's Republic of Korea (DPRK), the official name for North Korea. Exclusive travel is an understatement here because fewer than 5,000 Western tourists visit annually. If you want to come home with original stories and photos that nobody else has, put this destination on your hot list. Here's how to do it. 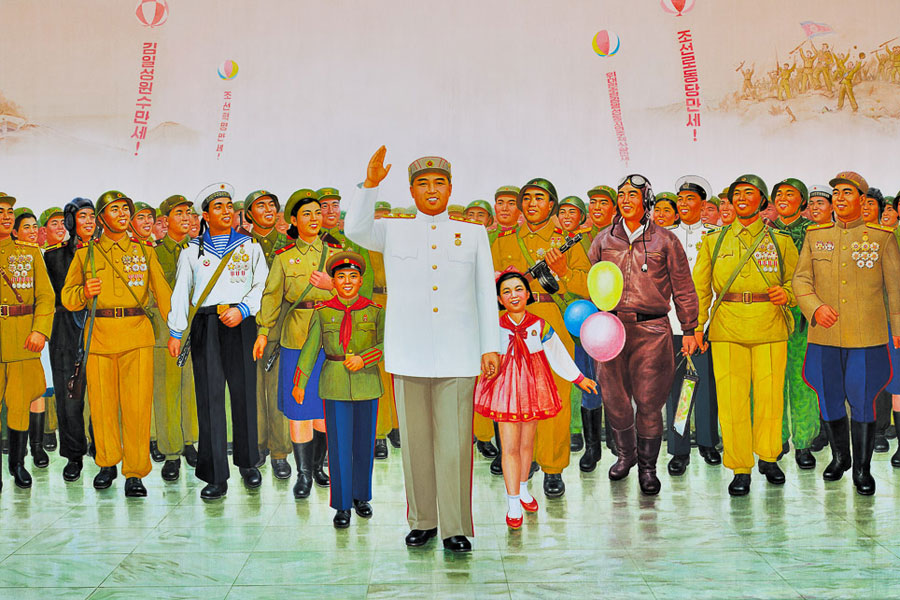 How to Get to North Korea

The most surprising thing about visiting North Korea may be that anyone can do it. Even Americans. Traveling here is neither complicated nor dangerous, and it's relatively affordable. Beijing-based English tour operator Koryo Tours has been planning trips to North Korea for more than 21 years. In 2012, they took more than 2,500 tourists to DPRK, a third of which were Americans. Koryo Tours arranges visas, books flights or trains from Beijing to Pyongyang, and ensures travelers discover the country in a fascinating way.

The trip starts with a 90-minute flight from Beijing to Pyongyang in a Tupolev aircraft on Air Koryo, the national airline. On board: a vintage-chic first class; beautiful stewardesses wearing white gloves and red lipstick; a meal that rivals many American carriers; and Pyongyang Times, a North Korean newspaper translated into English. If your flight is at night (highly unlikely), the views are spectacular: The Yalu River that separates China from North Korea is brightly lit and bustling on the Chinese side and completely dark on the North Korean side.

The other passengers will primarily be visitors and tourists; the North Koreans will be easily identifiable by the de rigueur badge they wear of the Great Leader. A smiling mural of Kim Il Sung observes the Tupolev as it lands at Pyongyang's International Airport.

Tourists will know what to expect, having been briefed in Beijing the day before. Laptops, cameras, lenses, and video cameras are all allowed. Back in 2009, on our first trip to North Korea, we still had to hand in our cell phone at the airport, but today you can take your phone inside the country and buy a local SIM card for international calls. Most big hotels have had internet connections since 2008, and Western guides have internet access on their smart phones. Our British guide, Simon Cockerell, shares his North Korea adventures on Instagram. He's doing an Instagram Takeover for Fathom this week. 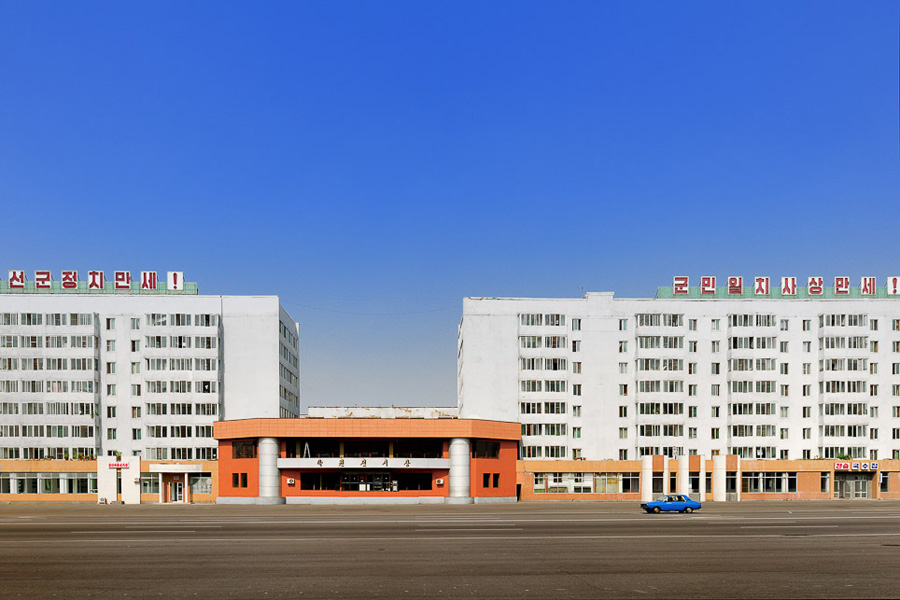 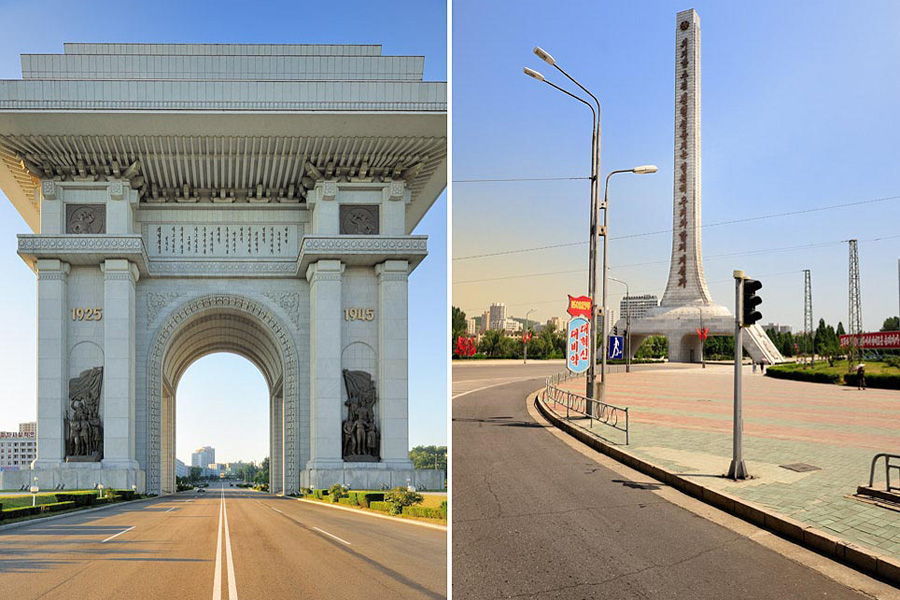 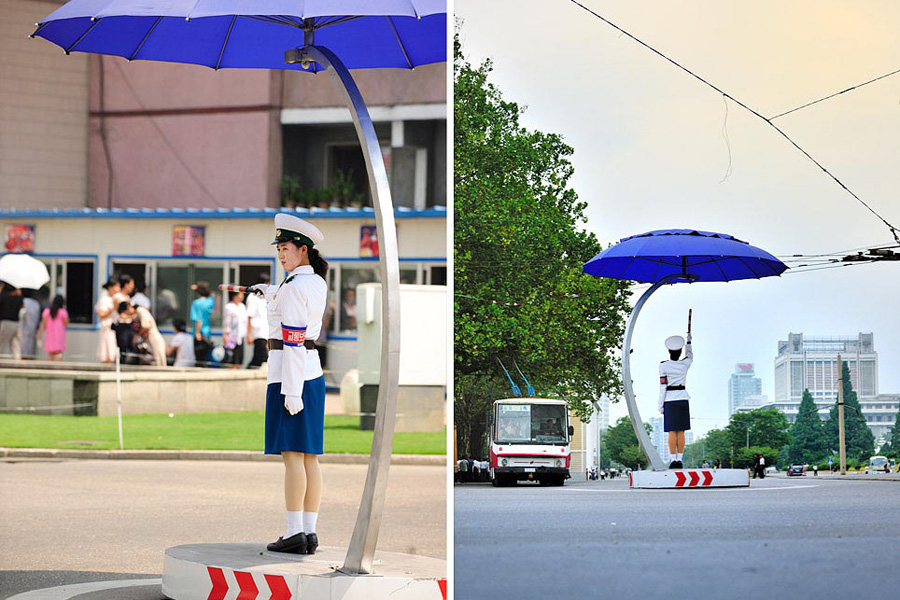 Are You Free on a North Korea Trip?

Yes and no. Exploring alone is a no-no. If you book an individual trip, two local guides and a driver in a stylish vintage Mercedes will be assigned to you. If you're with an international group, you'll  have two local guides, a Western guide, and a driver.

You can make special requests, but because the program is so tightly organized, tourists are restricted. In other words, you'll see the North Korea that the government wants you to see.

This in itself is already fascinating. Of course there are limitations. It is forbidden to take photographs of military installations (but isn't this the case in any country?), such as the border with South Korea. Bowing to statues of the Great Leader is requisite. But however well orchestrated the trip tries to be (which is equally true of many Western packages where the tourist only sees and experiences the things the tour operator shows them), you still get a glimpse of the real North Korea.

In the empty streets of the capital, Pyongyang, where only the happy few drive cars, stunningly dolled up girls in blue and white uniforms work the middle of intersections. Between official visits to museums, monuments, and mausoleums, you get a remarkable insight into the daily life of the North Korean. On August 15, Liberation Day, everyone sits in the park to picnic, dance, sing, and play. Families sit on the grass beneath the trees and most ladies wear sumptuous dresses. It's a good moment to sit down with the locals and have a great and relaxing time. 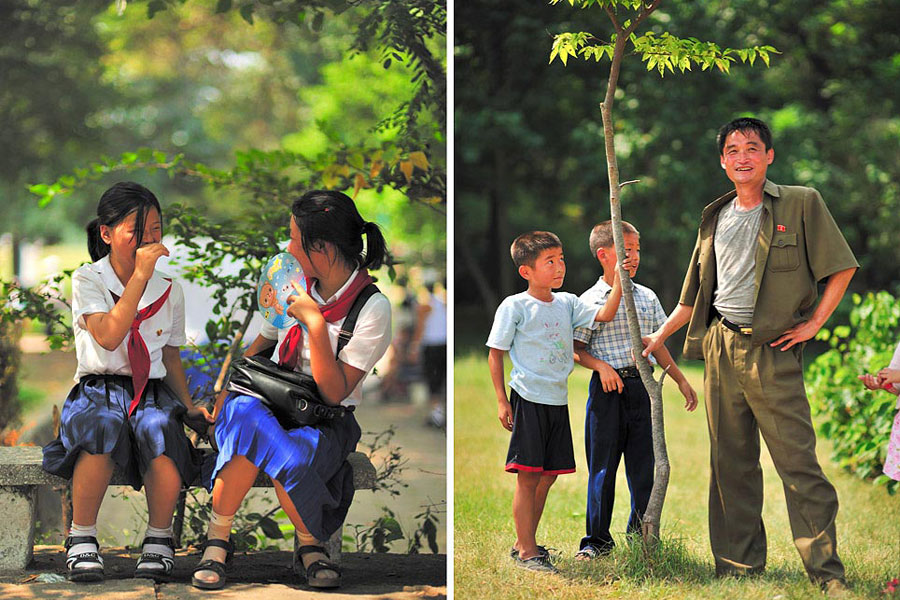 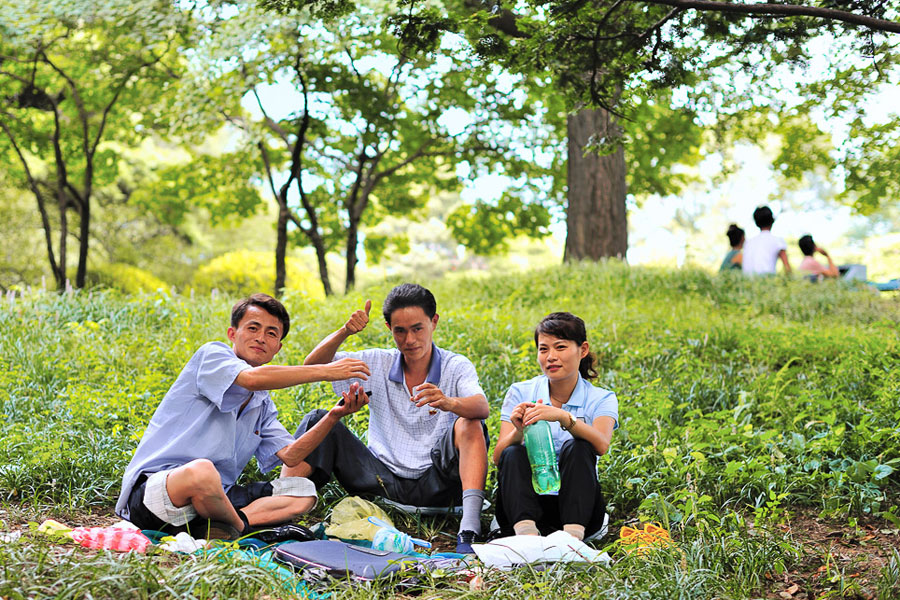 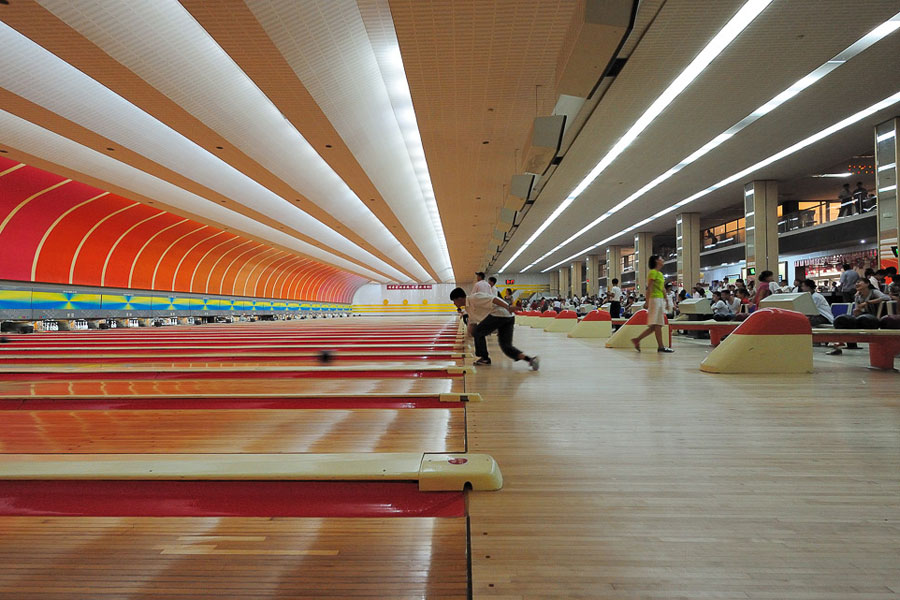 What's on the Program

A week in North Korea is a mixture of visits, tastes, and experiences. We bowled in a very rigid, Communist-era bowling alley with balls made in the USA. We rode the Pyongyang subway. We visited a school library and a local music school where accordion, piano, and guitar are taught with collective zeal. Men on our trip were told to pack a tie for the visit to the mausoleum of Kim Il Sung.

Yes, we went to the DMZ, the Demilitarized Zone between North and South Korea. On the way, we passed several border controls on a motorway with almost no cars. We stood very close to the actual and fragile line between the two foes. A photo of the blue sentry box and resident guard — South Korea just five meters away — was our souvenir.

Less official is the beautiful North Korean landscape that we enjoyed from the window on the many bus trips: green paddy fields, abundant spaces, and the occasional farm and village. One of these visits took us to the North Korean coast, which is heavily guarded by the military. You immediately notice Japan looming across the water. Despite this detail, a relaxing gourmet lunch follows at a small restaurant on the beach with freshly grilled fish, duck, and seafood. 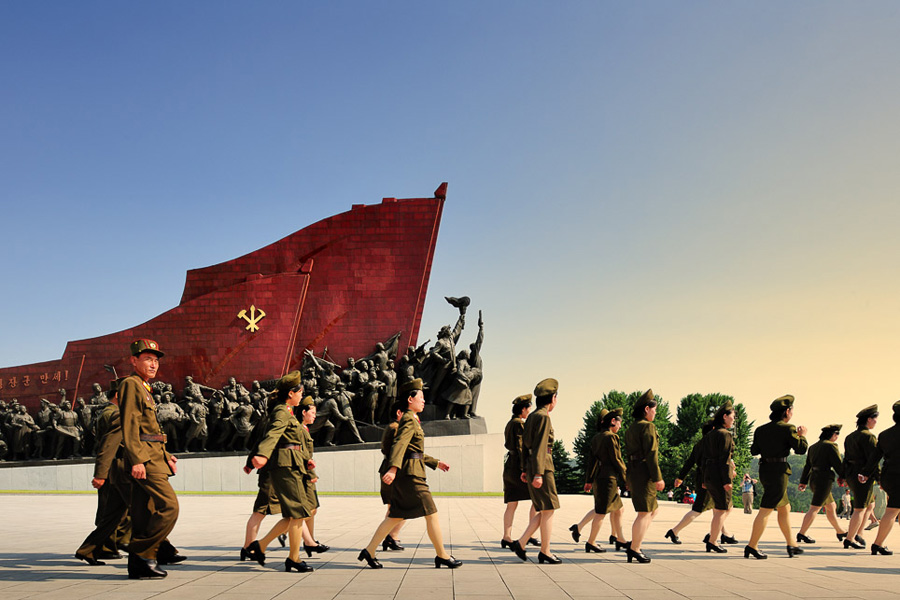 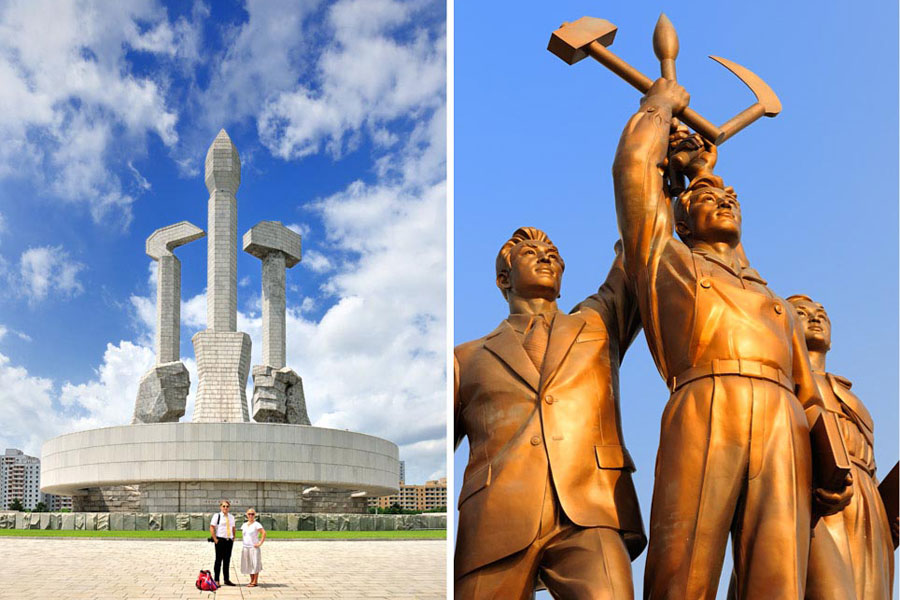 David and Debbie at the Workers Party Foundation monument. 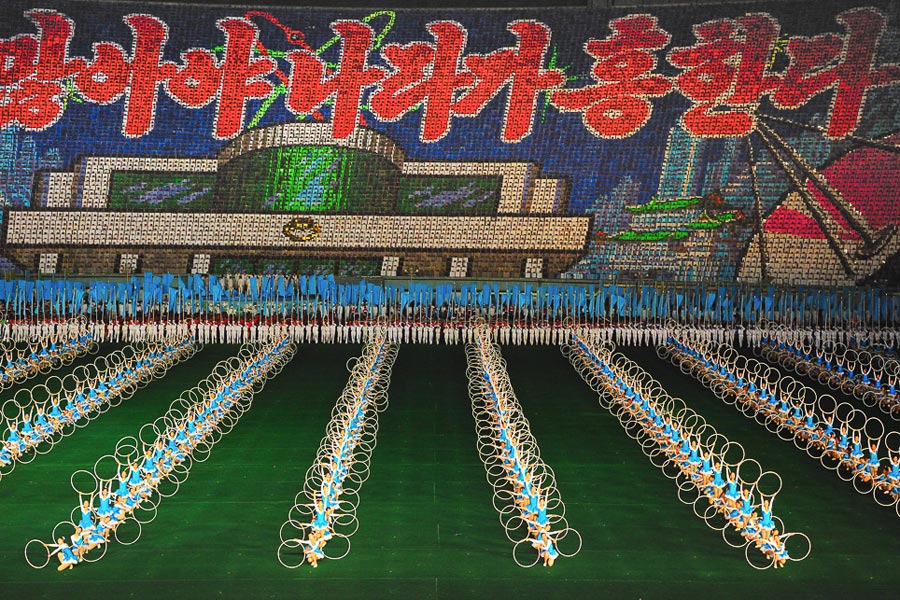 Just one small segment of the Mass Games.

The Arirang Festival, or the Mass Games, are DPRK's main attraction and quite simply the most amazing thing you will ever see. The games are a synchronized socialist-realist spectacular featuring more than 100,000 participants in a 90-minute display of gymnastics and dance, accompanied by music, wrapped in a highly politicized package. No other place on Earth has anything comparable, and you have to see it to appreciate the scale on display.

The Games run weekly every year from July or August and continue until mid-September. Some 80,000 dancers and gymnasts train throughout the year to perform for their compatriots — and especially for their leader. The backdrop is made by more than 20,000 cardholders who sit in the audience and make patterns through the synchronized turning of colored cards. As a tourist, attending and photographing the event is no problem. Prices for an evening range from US$130 for third-class seats to US$450 dollar for VIP seats front and center. (See photos from the Mass Games.) 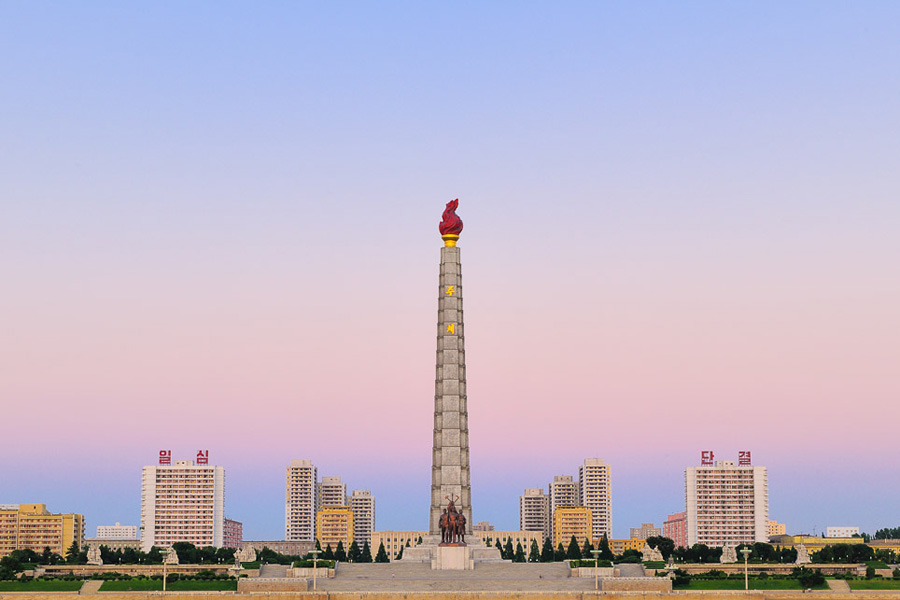 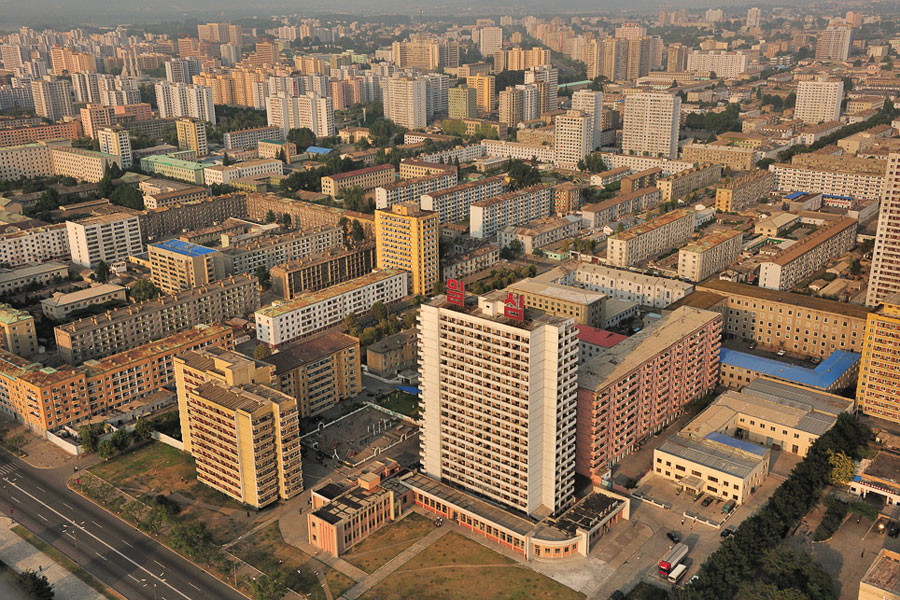 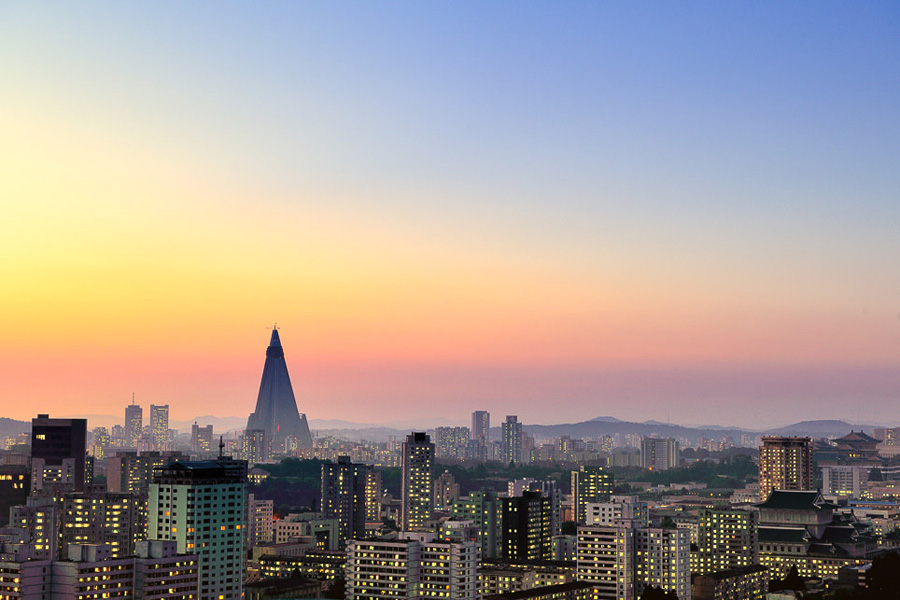 Is It Okay to Visit North Korea?

You may wonder whether traveling to a country like North Korea is ethically correct. You have to make the decision as you would for any country that is not corruption-free. But tourism is a source of income for the North Koreans, and provides important interaction between North Koreans and the outside world. Traveling to the DPRK raises a corner of the veil for both sides. Perhaps this interaction will pave the way for more freedom and peace for everybody. All you need as a tourist (apart from a chic tie) is an open mind and the understanding that despite the negative media attention it receives, real people make up one of the most secretive countries in the world.

In Pyongyang, we stayed at the super cool, 47-storey Yanggakdo Hotel. It is a Western three-star and a Chinese four-star hotel with a revolving restaurant on the top floor, bars, shops, a swimming pool, bowling, a casino, and other entertainment facilities like karaoke. The hotel has reliable electricity, heating, air conditioning, hot water, and foreign TV channels (BBC World, Japanese and Chinese TV), and internet access. In a small café beside the hotel, bottled beer is served at 0,40 euro a throw.

Euros are the official exchange currency in DPRK (USD were taken out of circulation in 2003), although many places also accept Chinese yuan, USD, and Japanese yen. Bring small bills and coins, as change can be a problem. Travelers' checks are impossible to cash in North Korea. The official currency, the won (KPW), is currently valued at roughly 180 won to 1 euro. Foreigners are not allowed to use the won. The best currency to use when buying goods is the Euro, but keep in mind that goods sold to visitors are expensive. You can get real wons for souvenir purposes at the hotel.

Tipping is appreciated in North Korea. Tip the guide five euros per day. Tip at your discretion in restaurants or bars.

We highly recommend the summer months, from July through September, when the Mass Games take place. The temperatures will be hot and humid during the day and cooler at night.

I Almost Made It into North Korea
North Korea's Stunning Mass Games
Monuments and Mealtimes: Scenes of North Korea

This was modified from a story that originally appeared on Class Touriste and is reprinted here with permission.