Fathom contributor Kate Donnelly visited Washington, D.C., during cherry blossom season and found that, as far as things culinary and creative are concerned, the trees weren't the only thing in full bloom in our nation's capital.

WASHINGTON, D.C. – If you're also addicted to the TV show House of Cards or the real-life drama of this year's presidential election, you know that Washington, D.C., has a flair for the theatrical. But when springtime — and specifically the National Cherry Blossom Festival — come to town, political shenanigans take a back seat to pretty pink cherry blossoms, leafy green buds, and a slew of better sensory offerings. Here's what's blooming in the capital city.

After a two-year renovation, the stately new space at Renwick Gallery across from the White House debuted its grand interiors with WONDER, an eye-popping installation featuring nine contemporary artists. Jennifer Angus arranged 5,000 brightly-colored insects in different geometric designs that mimic chic wallpaper that recall spring's vibrant floral pinks. Mexican artist Gabriel Dawe suspended a rainbow of fifteen colored strings against beams of light for his "Plexus A1." The exhibit ends in two phases, May and July.

Two miles away at Hirshhorn Museum and Sculpture Garden, home to one of the best collections contemporary art in the US, curvaceous architecture allows for quiet reflection, especially in the sculpture garden around works from Alexander Calder, Jeff Koons, David Smith, and the master, Auguste Rodin. Inside, a 360-degree wall drawing by local artist Linn Meyers is on show through April. 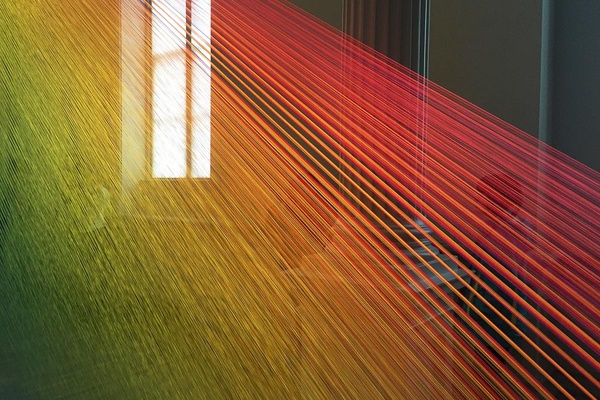 "Plexus A1" at Renwick Gallery. Photo by Kate Donnelly. 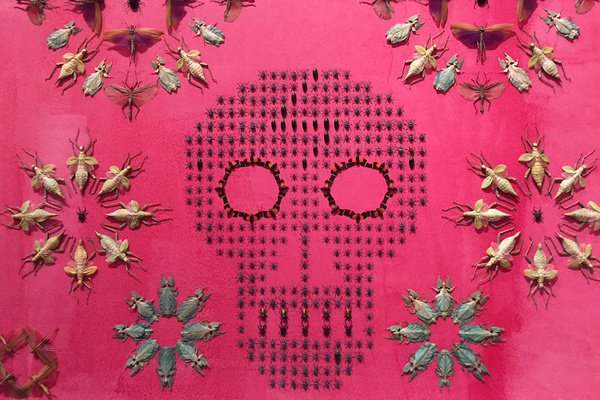 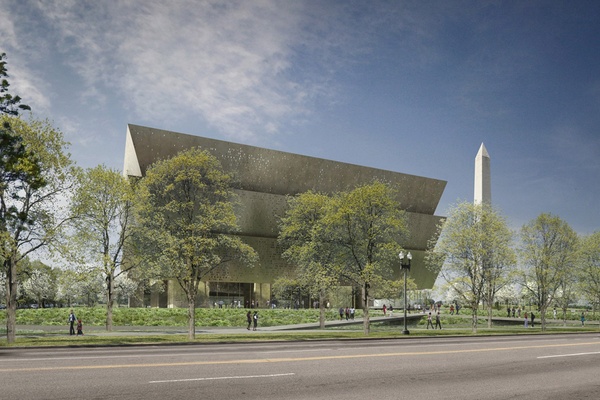 The hugely popular International Spy Museum provides hours of entertainment for kids and adults who believe the truth is still out there. The United States Holocaust Memorial Museum is serious, solemn, and sobering and will leave a lasting impression.

National Museum of African History and Culture, won't open until September, but passersby on the Mall can already admire the stunning, lattice-like bronze pyramid building by architect David Adjaye. The exterior pays homage to iron work by skilled enslaved Southern craftsmen. The interior will display more than 400 years of African American history and culture. 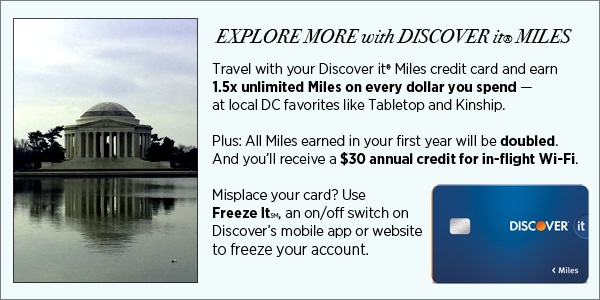 A trip to the nation's capital isn't complete without visiting one of Italian chef Fabio Trabocchi's restaurants. His airy, warm, light-filled Casa Luca has a rotating menu of dishes like cured meats and cheeses, simple, grilled branzino, and rich spaghetti carbonara with smoky bacon and black pepper. The sexy, see-and-be-seen atmosphere at Fiola is all dim lights and curved booths, and a visit from Maria, the chef's charming wife, is a highlight. The menu is ever-changing, with items like tuna crudo, bucatini with tiger prawns, and spring lamb cacciatore.

In Columbia Heights, everyone feels like a local at small Filipino-influenced eatery Bad Saint. Nab a seat at the countertop for family-sized portions of beef tapa over greens with tomatoes and garlic rice. Snug and minimalist Izakaya Seki is nice for small plates of Tsukune chicken meatballs, uni with quail egg, and udon noodles served hot or cold. 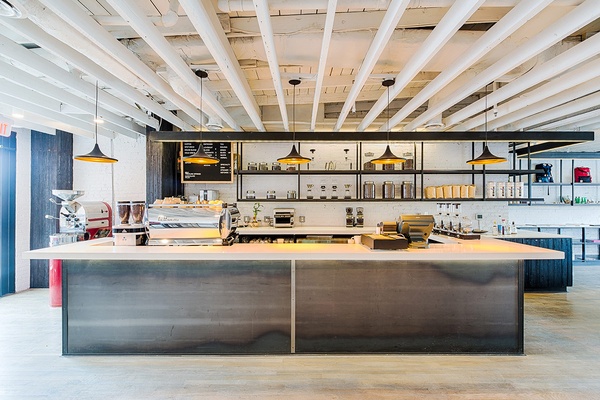 The cafe at Maketto. Photo courtesy of Maketto. 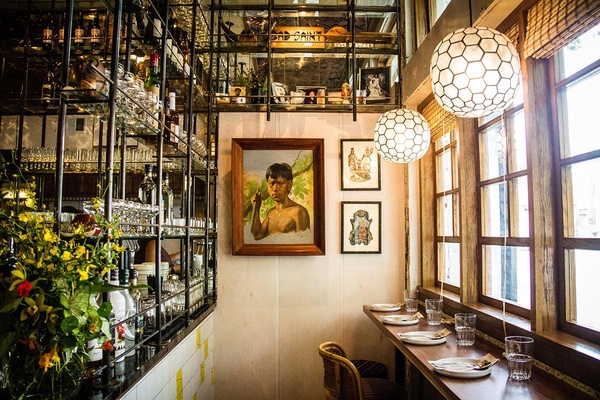 Maketto is an industrial-hip space that functions as a retail store and cafe, serving matcha lattes and sticky buns. At lunch, the 60-seat restaurant doles out Taiwanese and Cambodian cooking like steamed bao and a spicy beef rice bowl with fried egg and pickles. In Petworth, the quirky menu at Crane and Turtle marries Japanese and French cuisines with plates like tako wasabi (shaved octopus, fennel, fried tako ball, wasabi jus, orange oil) and charcoal-grilled hamachi on faro risotto with mustard greens and bottarga sauce.

Just off DuPont Circle, Little Serow, a subterranean 28-seat northern Thai spot, serves a changing prix fixe menu of dishes such as laap chiang mai (pork and lanna spices) and si krong muu (pork ribs, Mehkong whiskey, and dill). As with most of the restaurants mentioned here, plan accordingly since many are walk-in only.

On weeknights, there's gripping post-work people watching at the swank 1850s Round Robin, which once served regulars Mark Twain and Walt Whitman, and the aptly-titled Off the Record at The Hay Adams, where they pour a mean pear martini. Another option is the buzzy lounge at Michael Mina's Bourbon Steak, where the A5 Wagyu Chicago Dog (sausage and pork, pickled sweet peppers, spicy mustard) and duck fat fries pair flawlessly with crisp Sancerre.

In the Shaw neighborhood, the newly minted corner bar All Souls Bar is a hipster haven that specializes in its namesake, All Souls, a coupe of sparkling rose with a side of Maker's Mark served neat. The ultimate dive experience is in Mount Pleasant at Raven Grill — crumbling walls, vintage booths, old table-side jukeboxes, board games, cheap pints, potent well drinks, and rows of Utz potato chips, the only food you'll find here. (The only food you really need.)

Chef José Andrés headlines a Washington food and drink empire, and his mod, white-on-white barmini, billed as a culinary cocktail lab, leads the pack. They put the vintage glassware and scientific equipment like smoking glass beacons to excellent use, with more than 100 drink options paired with bites like grilled cheese with truffle and tuna tartare with egg yolk. A coveted stool at the bar is best for watching the action unfold, though Cerruti Baleri's quirky cactus sofas deserve an honorable mention. The bar is reservations only. 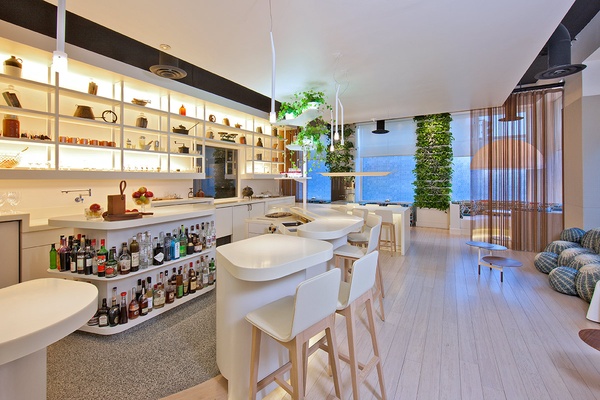 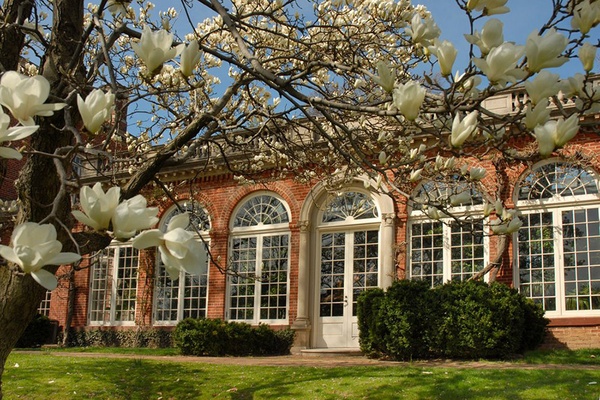 As seen from an afternoon stroll. Photo courtesy of Dumbarton Oaks.

There's no better way to cap off a good night than with an early run (okay, okay, an easy walk) along the wide expanse of the Potomac, past the historic Watergate Building, John F. Kennedy Center for the Performing Arts, with its $100 million expansion and vast green spaces, and over to the city's best sites. At this time of day, you have the city to yourself, making for quiet access to the Mall, the Lincoln Memorial, the Washington Monument, and the United States Capitol Building. (If you're doing the Google Mapping, yes, it's several miles.)

The sleeping-in option is an afternoon stroll in and around the charming streets of Georgetown. The most enjoyable route will include a wander around the estate of moody, grand, and stately Dumbarton Oaks, which feels plucked from the pages of a Daphne du Maurier novel or from an outtake of Downton Abbey. At this time of year, the perfectly manicured grounds and rows of yellow forsythia are a visual thrill. 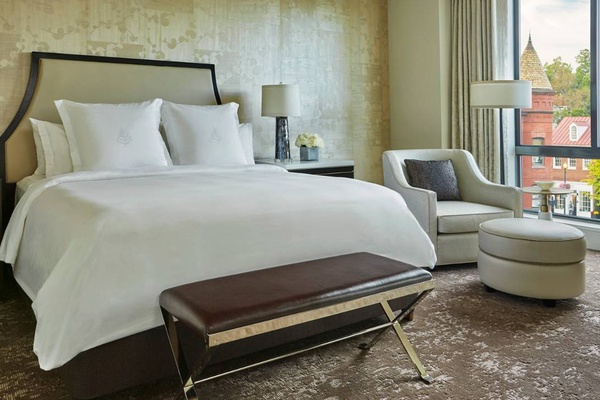 On the edge of Georgetown, the venerable Four Seasons Hotel Washington, DC still reigns as grande dame — everyone from royalty to diplomats to Hollywood actors stay here. Having recently undergone a $13 million dollar renovation, the 222 rooms are now a light, airy affair. The hotel has plenty to look at, with thousands of art pieces sprinkled about (I especially love Roni Stretch's series of five paintings in the lobby). Room keycards have sketches by a local artist of various presidents, like JFK smoking a cigarette in his signature Ray Ban aviators.