Spirits were high at the annual food festival on the sand. Fathom founder Pavia Rosati checks in.

SOUTH BEACH, FL – And then comes the long recovery from the South Beach Wine and Food Festival.

I used to be a regular, but I've missed the last few years of #SOBEWFF. Many things are, of course, the same: Big-ticket events sponsored by bigger brands. The massive tent on the beach whose theme changes nightly, from BBQ to burgers to salsa to reggae. The military-style (yet magically invisible) operation that preps the events with mind-boggling quantities of meat and booze. High-wattage chefs and long lines of fans waiting patiently for photos. Late-night parties where the food world gets together to decompress (and drink and drink and drink) until the wee small hours. Big Miami boobs and biceps and tattoos.

But a few things are different. Namely Miami. It's a new city. My old joke was that I came to a food festival and starved for four days. I can't make a proper meal out of burger samples, and even the best restaurants always left me wanting. Not this time. Khong River House, the new Thai restaurant from the Yardbird gang, and Mandolin Aegean Bistro, the outdoor garden in the Design District: I’d hop a plane back anytime. Also great: The Dutch at the cool and art-filled W South Beach, though that's not a surprise. New York chef Andrew Carmellini is incapable of turning out a bad meal.

The hotel scene is thriving: I was hosted by the Art Deco classic National Hotel, which is finishing a big renovation and deserves props for its excellent staff (not easy to come by in Miami). On the same corner of 17th and Collins Avenue are The Gale, a gorgeous new hotel that’s Old Miami by way of Retro Hollywood, and SLS, a boho stunner where I’d like to lock myself away for days. Nearby The James Royal Palm is airy and cool and feels so friendly, as James hotels always do.

But wait! This is about my Festival highlights. 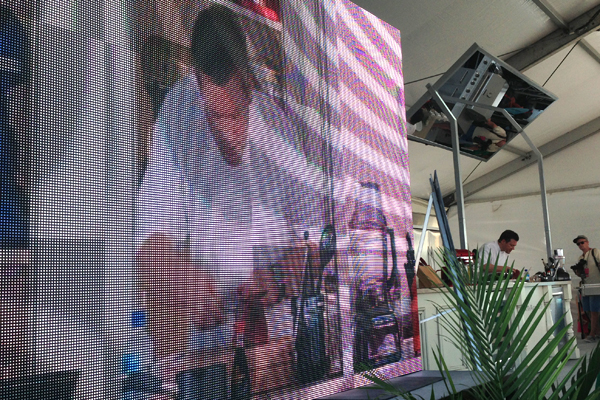 KICK OFF: THURSDAY NIGHT AT THE Q

The official event name is Moët Hennessy’s The Q Hosted by Paula Deen and Sons Presented by Omaha Steaks Sponsored by Miami Magazine, but everyone calls it by its old name, Bubble Q. (Get it? Champagne + barbeque.) I met Paula Da Silva, chef at 1500° Eden Rock, who wrote a great Fathom story about her favorite Miami restos (stay tuned!), and saw my pals Iron Chef Geoffrey Zakarian who was there with his restaurant The Lambs Club and Seamus Mullen from Tertulia. Q was my first sighting of Lee Schrager, the czar and mastermind behind the Festival. No one puts on a show like this man, and the rest of us have learned to rise to the occasion: Barbuto chef Jonathan Waxman was named the King of Barbecue and wore a long red velvet cloak to receive his crown.

I didn’t eat any barbecue. I did drink a lot of Moët. 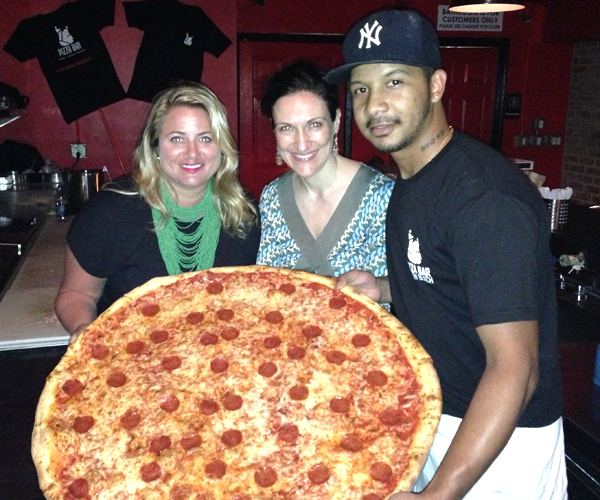 Next: Drinks at The Dilido Beach Club at Ritz-Carlton with The Cosmopolitan Las Vegas vice president of public relations Amy Rossetti and her team, in town to throw the afterhours on Saturday. We needed fuel, so we stopped for oversized pizza at the extremely noisy (deafening techno) Pizza Bar. The pizza girl had a piercing in her gum; the pizza guy, Rafi, invited us behind the counter to see just how big his pizzas are. Okay. Off to Studio, the dank basement karaoke bar at the Shelborne Hotel.

Yeah, it's a pretty divey scene. I'm totally into it. My husband split when we got to the techno pizza. 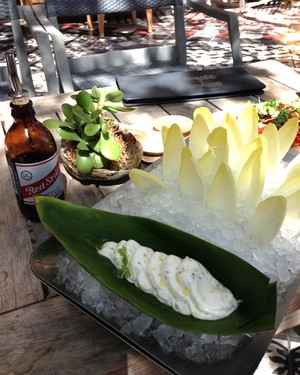 Wake up in pain. Make it for lunch at Hyde Beach with Harrison Shriftman’s Vanessa Leitman at SLS, which is really beautiful in the daytime. Watermelon feta salad, sushi, and the world’s cutest tzaziki salad, served with endive leaves looking like little soldiers. I take a zillion photos of the pool club and make a mental note to self: Drink more water tonight.

Off to the beach for chef Spike Mendelsohn’s first ever Let’s Get Spiked volleyball tournament at James Royal Palm. Among the sandy competitors: Andrew Zimmern, Stephanie Izard, Fathom contributor Tim Love, and Johnny Iuzzini in very, very short shorts. The game was tongue-in-cheek and fun, though there were flashes of genuine competition. The players wanted to win, while appearing effortless and looking good. You might say it's a metaphor for what chefdom is all about these days. 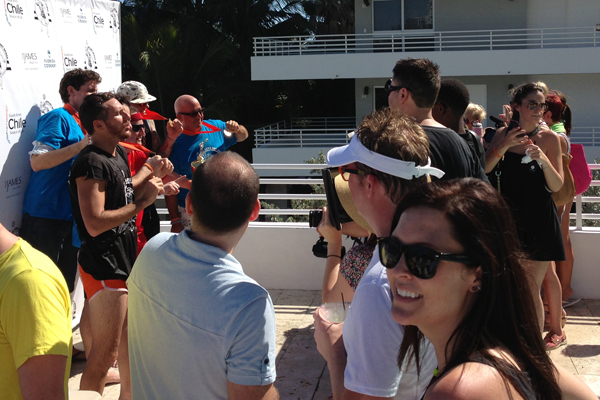 The volleyball winners show off their medals.

Back to the National for pool, beach, and nap time. 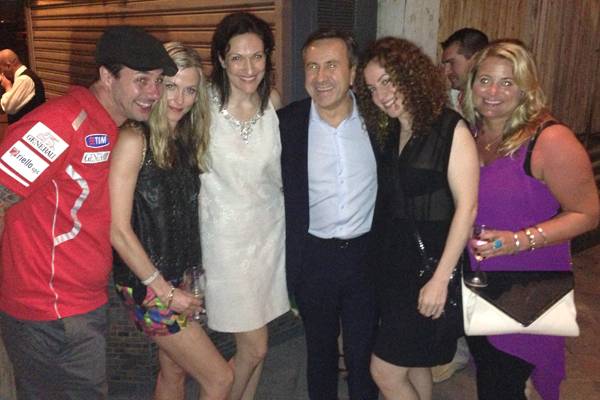 Food & Wine publisher Chris Grdovic hosted sunset cocktails at the National, where I saw many of the people whose names I've already bolded in this gossippy installment, and also My Last Supper photographer Melanie Dunea and Daniel Boulud. (Both Fathom contributors! I know! It felt like a big Fathom reunion to me too!) 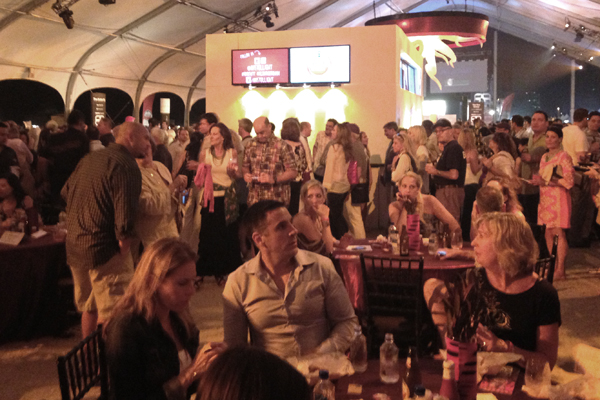 The scene at Burger Bash.

Then it was of to the Burger Bash. This is what I like best about SOBEWFF, the mix of intimate cocktails followed by bacchanalias where 62,000 burgers are served to 3,000 people in a tent the length of two football fields. At Amstel Light Burger Bash presented by Pat LaFrieda Meats hosted by Rachael Ray, I ate two of the 34 burgers: the legendary Shake Shack (my first time! And, yes, I’m admitting it!) and a delicious crunchified burger from Bobby’s Burger Palace. 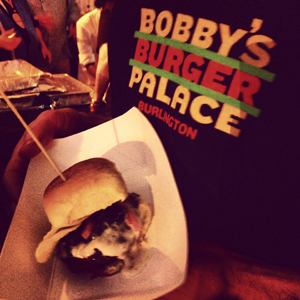 I won’t hide my bias: Bobby Flay is married to Fathom’s Stephanie March, who sat out the festival in Los Angeles. The crunch comes from potato chips; the heat comes from jalapeños; the salt makes you crave another two seconds after finishing it.

More karaoke at Studio, along with Casa Dragones’ (and Fathom Mexico City girl) Bertha Gonzales Nieves. This time I even performed with Bobby’s partner, Laurence Kretchmer. “Rapper’s Delight.” We killed it. Not that you asked.

SLS hosted the afterparty. It was dark and it was loud and it was fun. Danny Myers and Team Shake Shack, Drew Nieporent, Daniel Boulud (always the most charming man in the room), Andrew Carmellini, Rob Weakley and David Alan Bernahl from Pebble Beach Food and Wine Festival, the next culinary destination on April 4-7. 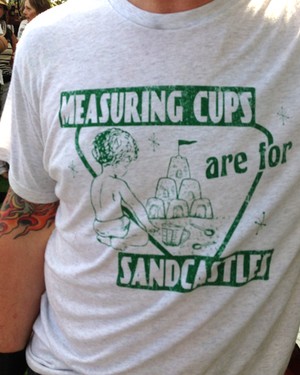 SATURDAY: WE SETTLE IN

Margaret and Geoffrey Zakarian hosted a brunch at Soho Beach House, which . Roast pork sandwiches, magnums of Domaine Ott rose, lots of chit-chat in the sunshine. Johnny Iuzzini showed up in a T-shirt that read "measuring cups are for sand castles." This is a party worth getting out of bed for.

I head to the beach to check out the Tasting Village and to catch a few chef demos. The village is a mob scene, but if you want to sample vodkas and olive oils and snacks and wines, this is the place to do it. The demos, on the other hand, are more intimate way to see the chefs you usually see on television up close and in action peparing meals, making cocktails, telling jokes. This is what they're like without producers in the background calling "action." The other events are the trade talks, where insiders dish about the ins and outs of the restaurant business through seminars like "How to Make Your Restaurant a Dining Destination" and "What It Takes to Be an Iron Chef America." Yes, the weekend is a giant party, but if you want to learn more about the food world, you can do that here, too. 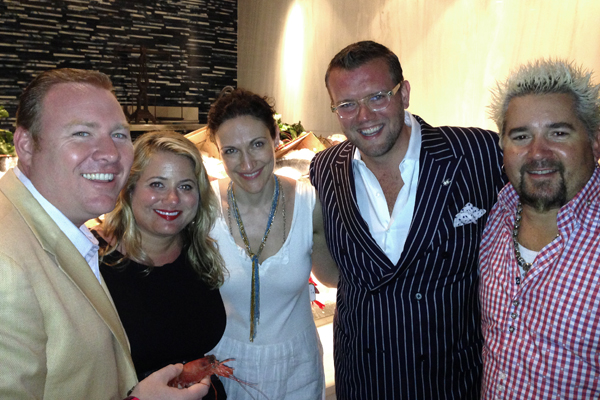 The night ends with dinner at Kohng River Valley, followed by the Cosmopolitan Las Vegas after party at Estiatorio Milos. Because it's Saturday night and the first batch of people fly back to NYC on Sunday morning on the 7 a.m. flight (those poor, poor things, still here at 1 a.m. with no signs of leaving), this party really feels like the peak of the weekend. There are some 500 people in attendance, and, yes, it's all the same crowd. (By now Miami feels like one compressed summer camp, with better booze than what you got when you were 15.) The conversation everyone is having is how great the whole event was, how much fun everyone had and was still having.

But no, the night isn't over, because Two Twelve Management is hosting their annual late, late night party at Broken Shaker, South Beach's awesome cocktail bar. By this point things are quieting down a little — it was 3 a.m., after all, which may be why no one was jumping in the pool — but spirits were still high.

One chef told me, "it's the same people, the same events...are we killing our creativity? Or are we replenishing it?" The verdict is clear: It's a little bit of both.