We're long-time fans of photographer David De Vleeschauwer's blog, Classe Touriste, which he runs with his partner Debbie Pappyn. (He also made it on our list of 24 Best Travel Photographers.) We asked him to tell us a little more about his latest, Remote Places to Stay, a 312-page hardcover featuring 22 of the world's most remote hotels.

Tell us a little about yourself.

I am a travel photographer shooting for international titles such as Monocle, Wallpaper*, National Geographic Traveller, Australian Gourmet Traveller, and Travel & Leisure.

I call Antwerp, Belgium home, but I'm out of town almost 80 percent of the year. I spent a decade traveling non-stop in search of far-flung or secret places around the world. I've slept on more than 1,000 hotel beds, taken more than 100 flights in a year, and visited almost 100 countries.

My travel philosophy is all about being independent, open-minded, discerning, opinionated, and time-intensive. This results in compelling images and unique addresses worth leaving home for. Think Arctic expeditions amongst the Inuit in Canada, a peek behind the Iron Curtain of North Korea, exotic explorations through Papua New Guinea, and island-hopping in Greece.

How would you describe your photography style?

What do you love most about photographing on the road?

I travel the whole world and don't specialize in any particular region — from polar destinations at -40 degrees Celsius to shooting culinary highlights in Copenhagen. I was recently on a mobile-camping safari in the Okavango Delta in Botswana with the legendary Ralph Bousfield. Last month, I enjoyed Cambodia in green season (that means no rain and less tourists). My days are never dull and there is always a new adventure waiting.

My subjects are quite broad. I shoot portraits, architecture, nature, and food. My gear changes according to the subject. Most of the time I travel with three cameras and a variety of fifteen lenses including primes, tilt-shifts, and my 2.8's. Debbie and I always travel with approximately 150kg worth of luggage in total (that's more than 300 pounds).

Which was your favorite remote destination?

We loved Mongolia, a destination still quite under the radar, except during July when the capital floods mostly with Americans wanting to see the games at the Nadaam Festival. We prefer to go in September, when the Indian summer prepares the rugged countryside for a long Siberian winter. We stayed with Eagle Hunters in the Altai Mountains, attended a small-scale hunting festival, and had time and space to enjoy the nomadic ways of life. Mongolia should be about slow travel — and not ticking off lists.

I attached a GoPro on an eagle after the festival. You need to see the video!

Where are you headed next?

Debbie and I are off to Iran this weekend; then hopping on a small cruise ship in the Mediterranean; then heading to Iceland; then Portland and Colorado; afterwards we're exploring Romania on a road trip.

Any particularly exciting or terrifying story to share from one of your remote trips?

I was shooting an active volcano on Tana Island in Vanuatu. We had to hurry because heavy rains were rolling in, and we needed to cross a river to get back to the guesthouse. I took one last shot before running down the mountain. Two minutes later, a huge explosion happened and, as we heard later on from other visitors, a massive lava rock landed right where I was standing. If it wasn't for the approaching thunderstorm, I would have been hit by rocketing lava.

Tell us about your new book.

We published Remote Places to Stay, a 312-page hardcover featuring 22 of the world's most remote hotels. late last year. Through breathtaking photos, the book highlights 22 otherworldly hotels in far-off locations where going off the map is sheer joy.

From luxurious to basic chic, from the Arctic North to the desert landscapes of Africa, and from a comfortable refuge in the Himalayas to an abandoned village in the heart of Italy. It's a distinct mix of unique outposts in remote corners of the world where a strong sense of place is still palpable. It's a solid read for anyone who believes the journey to the place is a part of the experience. 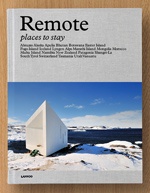 Get Remote Places to Stay, a 312-page hardcover featuring 22 of the world's most remote hotels.

Find more details about the book on Debbie and David's website.

Mossy lava fields surround Hotel Budir (our favorite hotel in Iceland) and a lonely, Icelandic church in the distance.

Look out over Navajo territory where Amangiri blends perfectly with the out-of-this-world landscape.

Horseshoe Bend is one of the natural wonders in Arizona, near Amangiri. Go early in the morning to catch that magical light.

Built in 1927 and left untouched until today, Briol is a historical hotel in northern Italy. Pension Briol is one of the most charming inns in Sud Tyrol and is only accessible by walking through the forest. No heating, no WiFi, no telephone or TV, just beautiful rooms, great food, and mountain views.

Jack's Camp in the Kalahari Desert is one of the most legendary safari camps on the African continent. A typical African thunderstorm approaches, providing the dry salt pans with some much needed rain.

Hidden in the deep of the Sahara, the tented Dar Azawad Desert Camp is fit for those yearning for dead silence and pitch-black skies.

Watch the sun rise above the red sand dunes of the vast Sahara.

Colors of the sky fit perfectly with the red Namib Desert at Wolwedans in NamibRand, a 202,000-hectare private nature reserve established from former livestock farms in the 1980s.

Hide away on a secret Greek island, only known by sailors and lovers of the good life. Mararti has less than ten permanent residents and more than 200 goats. You have to take several ferries and boats to reach the fantastic Pantelis Marathi Island Resort.

Vanuatu can easily compete with Bora Bora, the only difference is that you'll have islands like Ratua all to yourself.

Padaste Manor, a hideaway on the tiny Muhu Island in Estonia, is perfect for romantic weekends and energizing stays to escape from the world.

Driving over the frozen Balic Sea towards Muhu Island.

An albergo diffuso is a hotel scattered around a village. Old, abandoned houses are restored to unique hotel rooms. Bed down at the medieval hamlet of Sextantio Albergo Diffuso in Santo Stefano de Sessanio, where you can mingle with locals and live the slow life.

Enjoy views of the Baguales mountains in your own backyard at Estancia Cerro Guido in Patagonia.

Fly with Super Cub bush planes over the endless Wrangell–St. Elias National Park, where Ultima Thule Lodge is the only luxury lodge to stay.

Built in only 30 minutes, a mobile gerscape tent sits quietly in a vast Jalman Meadows Wilderness Camp, waiting for the frosty night to fall over the tundra.

A proud row of moai on Easter Island, the most remote island in the world with an international airport.

Get Remote Places to Stay, a 312-page hardcover featuring 22 of the world's most remote hotels.

Find more details about the book on Debbie and David's website.