In relocating from Los Angeles to London this year, British journalist Liza Foreman found repatriation made much more delightful by a couple of hotel gems, one in the city and one in a place most people could not identify on a map.

LONDON – Serving until 1938 as the headquarters for the British newspaper The Morning Post, One Aldwych hotel in Convent Garden in central London retains something of the news feel about it, which is perhaps what led this reporter to name it the ultimate home base while relocating from Los Angeles to London.

Over lunch at in-house restaurant Axis with Howard Rombough, the former journalist who is now the hotel's public relations director, I learned how the artwork on display and the projects the hotel is involved with are meant to connect the hotel to London, much the way The Morning Post was absorbed into The Telegraph in 1937.

Lunch, by the way, was very Original British: corn-fed chicken in rapeseed emulsion with wood sorrel chicken liver parfait and pickled apples for me; Cornish lamb with Wye Valley asparagus for him. Dessert was poached Yorkshire rhubarb with lime and coconut cake and rhubarb desert. Rhubarb being a favorite dessert among Brits, of course. 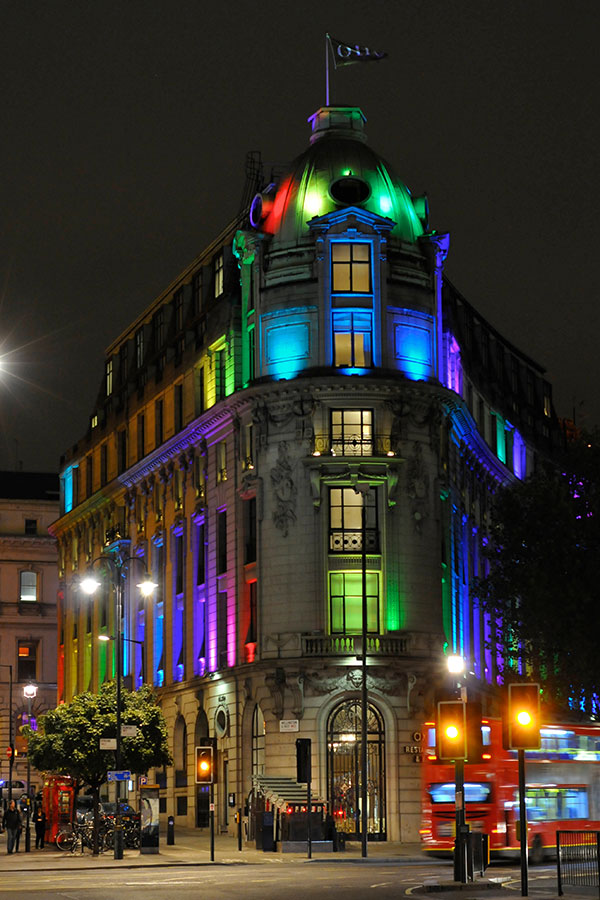 The colorful exterior of One Aldwych. 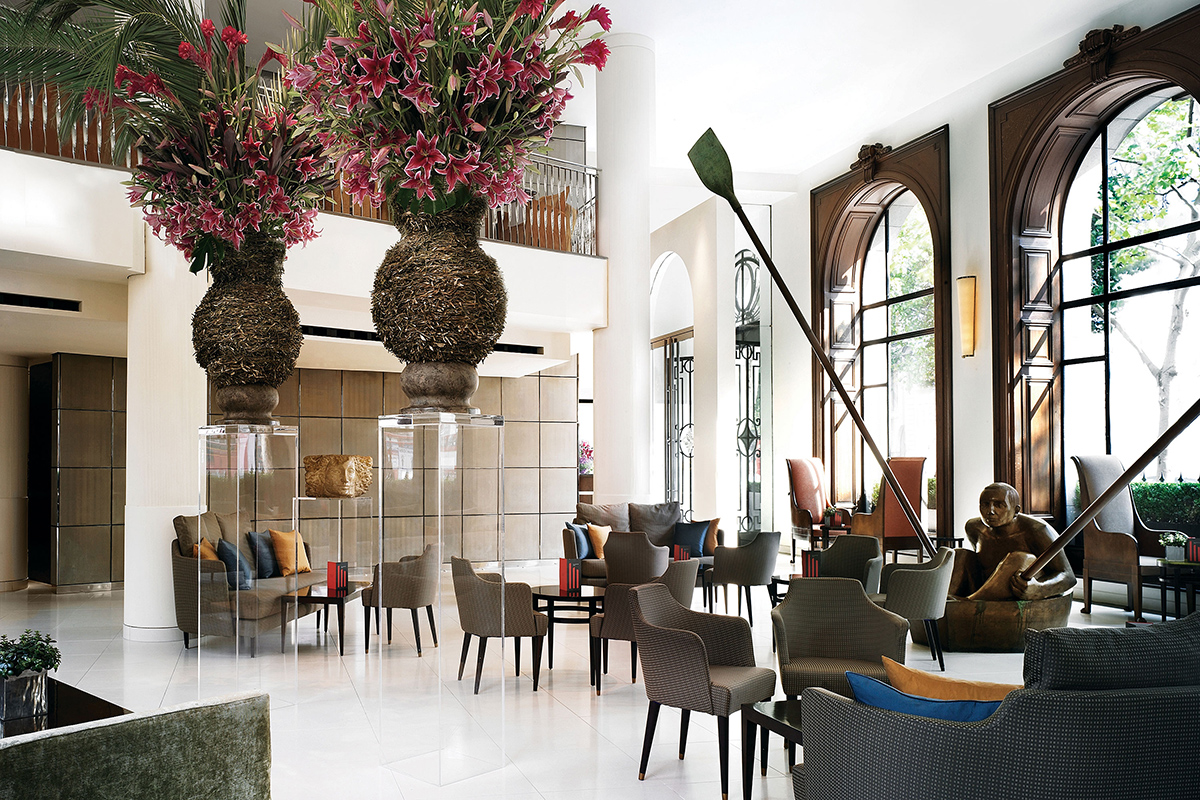 Boatman with Oars in the foreground. Head of Dionysus in the back.

The British sculptures on display in the airy lobby bar and lounge include Head of Dionysus by Emily Young, who The Telegraph called Britain's greatest living female stone sculptor; Boatman with Oars by Andre Wallace; and the colorful Beano Dog by Justine Smith. The pieces are among the 350 in the Art at One collection of contemporary at that fills the hotel and its 105 rooms and 12 suites. The new guests-only Lounge at One, which opened in 2014, features 80 Rizzoli art and design books — some featuring nude British beauty Kate Moss — selected by the British designer Paul Smith.

The art is outside as well as inside: One Aldwych is a founding donor of the impressive Garden Bridge that will soon be underway.

Budgeted at £175 million, the project will be a bridge that doubles as a garden, connecting Temple with South Bank. Architect Thomas Heatherwick and gardener Dan Pearson are the main creatives behind it; actress and activist Joanna Lumley is a major backer. The bridge is both futuristic and gothic, and the project has been described as a floating forest with a touch of the fairy tale. Construction is set to begin in December 2015 and to be finished in December 2018. 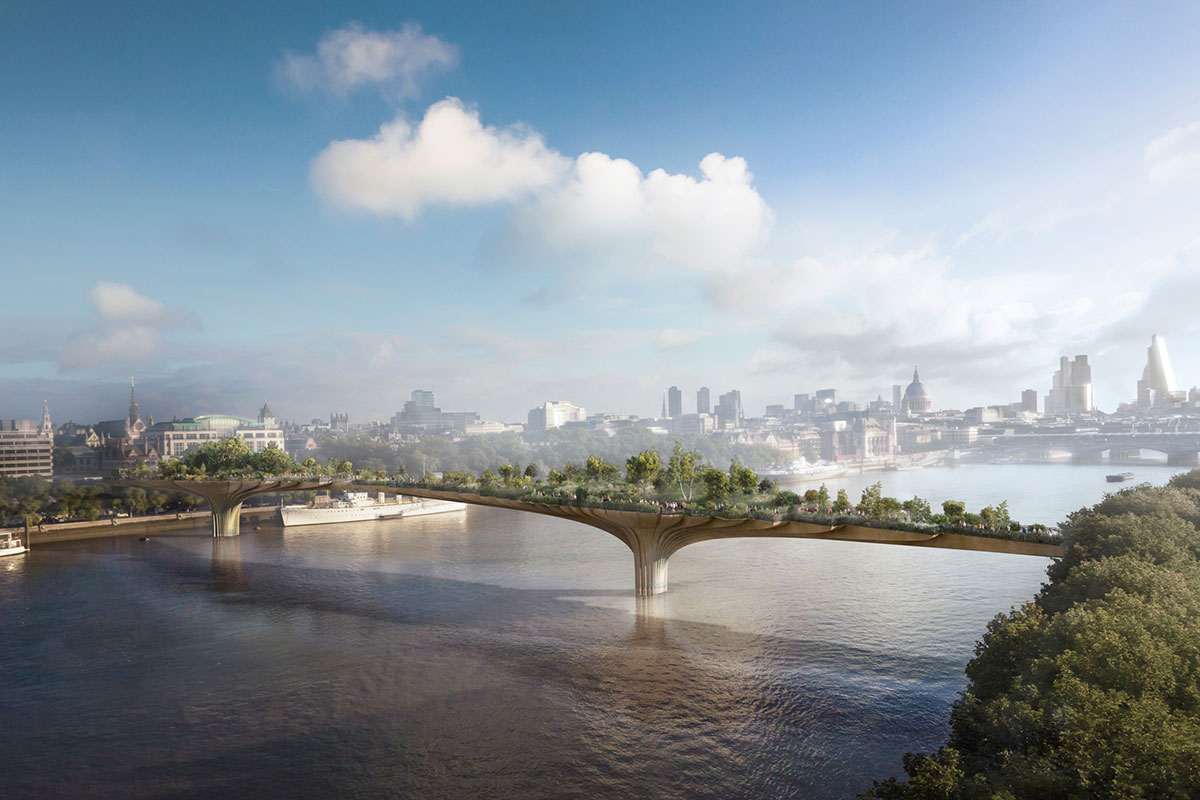 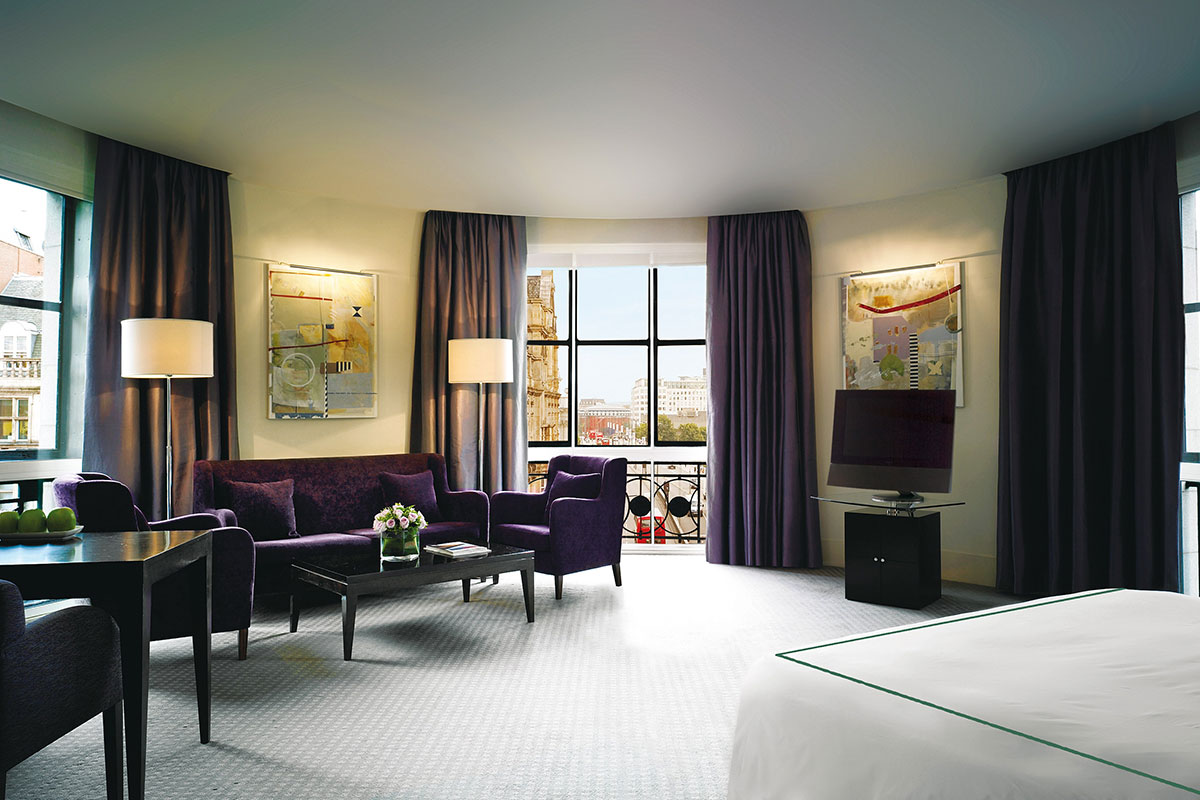 Eye candy inside and outside the studio suite.

As for the hotel, my peaceful white room with minimalist décor overlooked the rooftops of Covent Garden, a neighborhood that’s been changing considerably for the better. I love One Aldwych because it’s a cozy and quiet enclave in the middle of the busy city, where cocktails at the appointed hour are a relaxing way to wind down, watching the double decker buses and men in business suits whizz by outside.

But the main reason I would not want to leave is the spa. And, more precisely, the subterranean pool, which is a gem for pool lovers like me for whom decisions more often than not involve a daily swim and where to take it. Although the hotel is slap bang in the middle of London, I often find it empty. In the water I'm transported across continents, through the soothing sounds of the underwater music and a dreamy film featuring colorful sea creatures that I watched while I was swimming, catching glimpses of the screen at the end of the pool between laps. At one moment when I poked my head out of the water, I wondered if I was back in California. No, I was in London. But still closer than I had expected.