NEW MEXICO – For two weeks every summer, in almost auto-pilot fashion, I head southwest to Santa Fe with my family. New Mexico is where I discovered the constant magic of color, pure air, and expanse of sky. It's no surprise that this place has made painters into pilgrims. The quality of light against the earthy palate, shapes, shadows, mysterious mountains, and rugged terrain begs to be captured on canvas.

I've always associated the artist Georgia O'Keeffe with her flower paintings. It wasn't until I spent time at her small museum and read Laurie Lisle's fascinating biography Portrait of An Artist that I learned Ms. O'Keeffe not only lived a rich, fascinating life, she gained much of her artistic inspiration from her surroundings at Ghost Ranch and her home in Abiquiu. My mom and I first visited a few years ago and were stunned by our proximity to something so beautiful and even holy (in the non-religious sense).

There's nothing more intimate than visiting someone at their home. At while Georgia O'Keeffe hasn't been home for almost 30 years (she died in 1986), the spirit and essence of her daily routine still exists at her magically untouched Abiquiu home, 60 miles from Santa Fe. The house is maintained largely as she left it, and it's impossible not to see how her habitat was a direct inspiration for many of her later paintings, namely In the Patio III (1948) and My Last Door (1952/54). It's a rare glimpse into her private world. 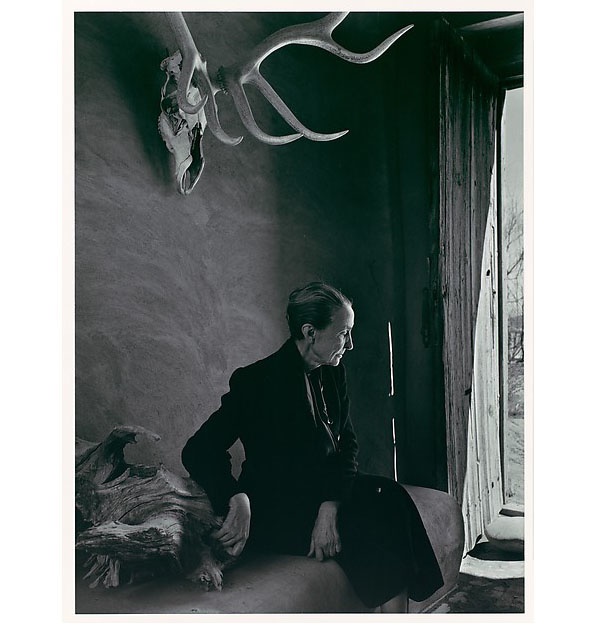 The artist at home. Photo by Yousuf Karsh / courtesy of The Metropolitan Museum of Art.

O'Keeffe's New Mexican Pueblo-style home has the flourishes of the artist's cool, 1950's aesthetic: Florence Knoll's Womb Chair, a McIntosh stereo, Alexander Girard pillows (like the original International Love heart), even Ansel Adam's ashtray (he was a friend). O'Keeffe loved to cook, and there's a bevy of pots and pans by Le Creuset, dried herbs, and teas in her pantry. Outside, there's a vegetable garden. There's also the fantastic collecion of taxidermy, white elk skulls, driftwood, and large rocks — the iconic stuff that influenced her paintings and the famed 1956 photo by Yousuf Karsh.

In a separate building, just past the Japanese-influenced garden (juniper trees trimmed like bonsai and Chinese elms), her studio is a light-filled, white-on-white room with a wide expanse of windows overlooking the earthy red cliffs. Her stark bedroom has a small collection of rocks meticulously stacked and organized.

Because no cameras or phones are allowed for photographs, a walk through the place is a meditation on remembrance, an exercise in taking in the little details, the larger landscape, and the sensation of light. It's what O'Keeffe would insist we do as her guests. 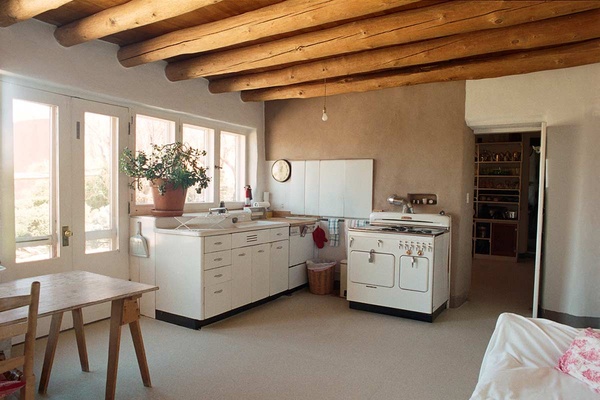 The kitchen. Photo by Herbert Lotz / courtesy of the Georgia O'Keeffe Museum.