We continue Chefs Travels week with a trip to Cuba by way of Florida. Ana Sofía Peláez, Brooklyn-based author of the recently released The Cuban Table: A Celebration of Food, Flavors, and History, gave us a tour of the places where she finds la vida Cubana when she's back in Miami.

MIAMI – Miami born and raised, I left to study in New York, eventually landing in Cobble Hill, Brooklyn, where I currently live. It hasn't stopped me from going back as often as possible, though Miami stubbornly refuses to stay exactly as I left it. Growing up in a Cuban family, I appreciate the effort they put into transmitting the culture they weren't willing to give up. Now I can appreciate how that love has shaped the city that's grown up along with them and been revitalized with successive waves of immigration from Latin America and the Caribbean. I try to hit as much of the old as the new with each trip back. Here are some favorites that keep me coming home:

Ermita de la Caridad
3609 South Miami Ave.; +1-305-854-2404
A national shrine dedicated to Cuba's patron saint, la Caridad del Cobre, this pilgrimage site is the heart of Miami's exile community. Built like a music box and surrounded by water, you have the feeling it will unmoor and float away at any moment. 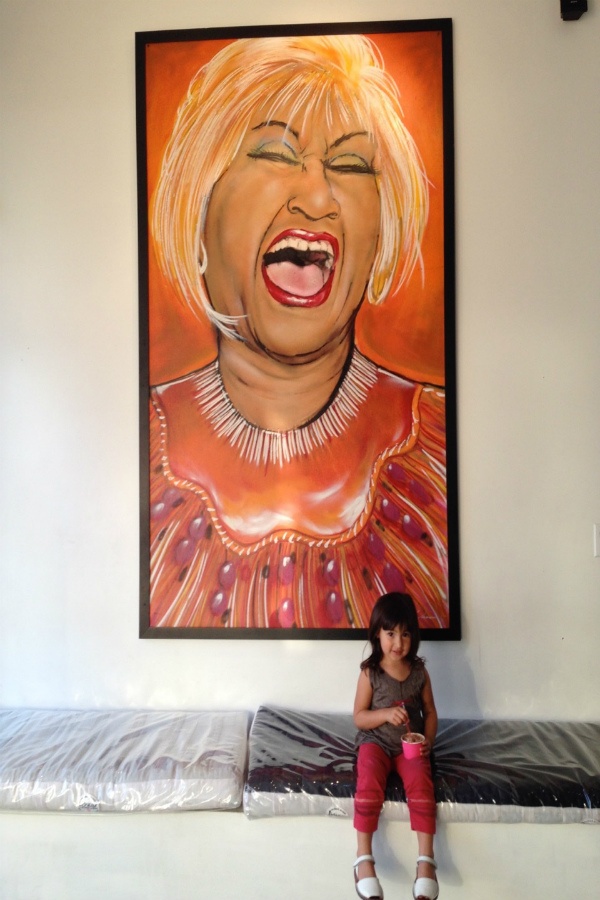 Cigar Boutique of Little Havana
1110 SW 8th St.; +1-305-285-9154
My love of cigars is inversely related to my affection for cigar shops. It's too tempting to step inside and breathe in the history, even when it comes with a heady dose of aromatic smoke. Once the site of El Credito Cigar Factory that produced La Gloria Cubana cigars, the Calle Ocho shop, now run by former employees, has plenty of both.

El Brazo Fuerte Bakery
1697 SW 32nd Ave; +1-305-444-7720
I love this family-owned shop for their unchanging lineup of pastries and desserts — including classics like sweet and savory menesiers and sugary yemitas — that have fallen out of other bakeries repertoires. 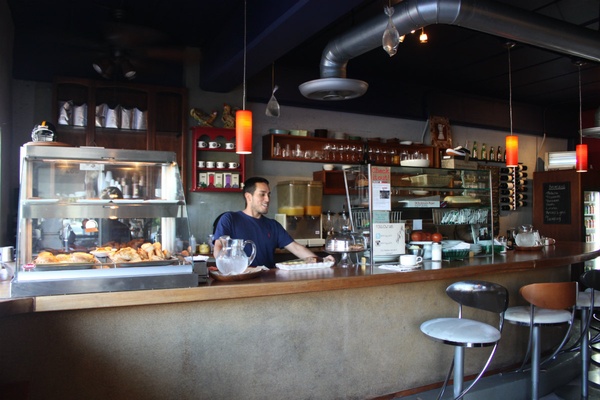 An inside look into Tinta y Café.

Tinta y Café
268 Calle Ocho; +1-305-285-0101
Pulling in regulars from both their Little Havana neighborhood and nearby Brickell, suited-up finance guys and suited-up firemen, as well as hipsters and housewives, line up at the coffee spot to talk about everything and nothing over cortados, flaky pastries, and empanadas. It's not your typical ventanita, but it's just as fun. Their el pecado coffee — espresso layered with condensed milk, espresso, steamed evaporated milk, and topped with the perfect milky foam — is too good to pass up.

Maximo Gomez Park - aka Domino Park
801 SW 15th Ave; +1-305-285-1684
Don't worry about distracting the players that congregate at Domino Park, because nothing takes their mind off the game. Sitting down to play, however, is another matter, so it's probably best to just watch from the sidelines and enjoy the banter heard over the click-clack of the dominos.

La Camaronera
1952 W Flagler St.; +1-305-642-3322
The Little Havana fish-fry stand and market has recently expanded to include a dining area, but you should take your place at the counter to stand elbow-to-elbow with the other customers at least once. They're best known for the pan con minuta breaded fish sandwich served with the tail still on, but their unbelievably tender and barely sweet shrimp is a personal favorite. 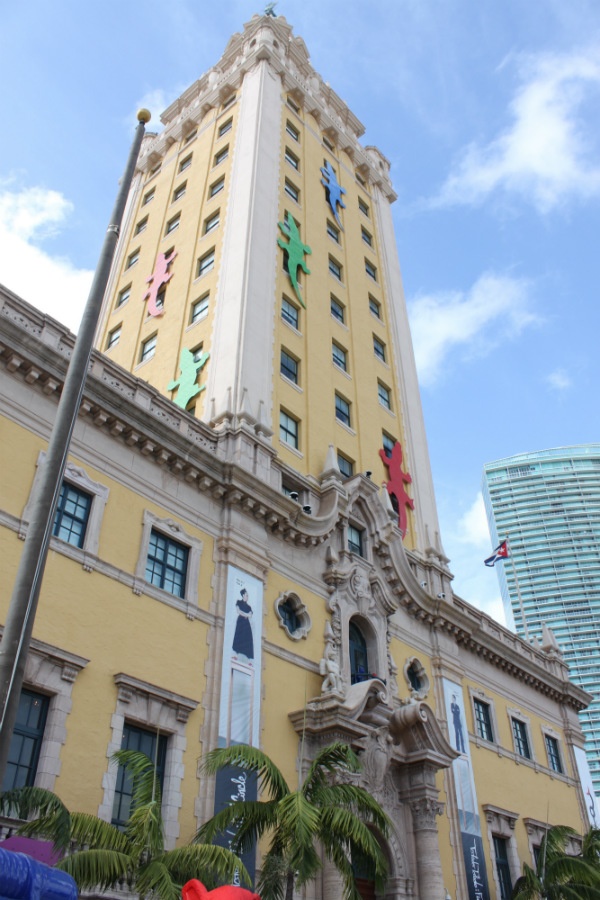 The Freedom Tower covered in lizards.

Freedom Tower (MDC Museum of Art + Design)
600 Biscayne Blvd; +1-305-237-7700
A Spanish-style landmark building from 1925 once housed The Miami News, but is best known as the processing center for countless Cuban immigrants, making it the Ellis Island of the South. A permanent installation on the ground floor tells their story, while the upper floors are dedicated to visual art and design exhibitions.

Bread+Butter
2330 Salzedo St.; +1-305-442-9622
Chef and owner Alberto Cabrera pushes the limits of traditional food at his Coral Gables gastropub by way of a Cuban cafeteria with amazing results. Tamal en cazuela is topped with smoked oxtail and frita hamburger comes with kimchi, but the Humboldt Fog flan arrives repurposed in cans just like at home, keeping the old guard happy and the up and comers interested.

Enriqueta's Sandwich Shop
2830 NE 2nd Ave; +1-305-573-4681
Before Downtown Miami's Wynwood became an open-air gallery filled with shops, cafes, and restaurants, there was Enriqueta's. Owned by Jose Luis Pla and his daughters, one look into their all-female galley-style kitchen makes it clear who is running the ship. They also have the best pan con bistec and possibly the best flan in Miami. 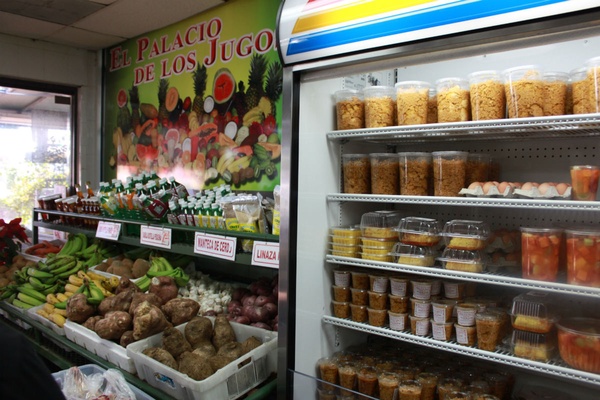 Healthy bites for everyone at El Palacio de los Jugos.

El Palacio de los Jugos
5721 W Flagler St.; +1-305-264-1503
A warren of food stations selling arroz congrí and arroz con pollo, roasted pork and chicharrones, tamales and plate-sized tostones, What they don't make on-site is brought in from the family's farm. Remember to pick up few bars of their homemade guava paste and fresh cheese to take with you. 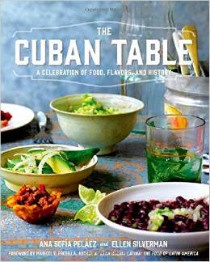 Recipe for Garbanzo Stew (from The Cuban Table)
Slideshow: A Cuban Food and Love Story
Fathom Miami Guide
Fathom Cuba Guide
In Focus: Out and About in Cuba