A serious (and we mean serious) world traveler, Natasha Hecher rarely stays in one place for more than a few months. For obvious reasons (read below), she spent a working summer in Oslo, Norway, and returned with a roundup of experiences that made staying put totally worth it.

OSLO, Norway – "Because the men are tall and the money's good." That was my standard response when people asked me why I was spending the summer waitressing in Oslo.

Which was partly true, but it was more the fact that I have an ongoing fascination with Scandinavian countries. Norway is always in the top five on the world happiness index, but after spending six months there, I would say that "happiness" isn't the most accurate word. I'd use the word that means "happy, wealthy, smug, and a little privileged." Then again, if I lived in a country that enjoyed a perfect social system, a pristine landscape, and I was stunningly good looking to boot, I would be pretty content, too.

Speaking of reasons to be happy: Did you know that Norwegians only pay half their tax in November because the government understands that their people will have a lot of outgoing expenses around the holidays?

Most visitors to Norway use Oslo as a launching pad to the fjords on the western cost along the North Sea (though Oslo itself is one of the country's 1,1190 fjords) and, when they do visit the city's tourists areas, do so with a get-in, get-out attitude.

When I looked for Oslo information, I found many Oslo-on-a-budget guides, probably because the city is very, very expensive. Especially the booze. However, if you approach Oslo with a what-it-costs attitude, you will miss out, and nobody wants to be that guy. The smarter strategy is to be selective about your expenses and splurges.

What follows is what I learned about exploring, snacking, and drinking to get the full diversity of the city — the traditional, the ultra modern, the contrived grunge.

The First Thing You Should Do

Get an Oslo Pass. This is the best way to travel around to the attractions that appeal to you. You can jump on the trams and trains and cruise around the fjord by boat in easy hop-on, hop-off style. Oslo is not very big, but too big to do by foot. Which makes the public transportation system just perfect.

Pre-Game in the Park Before Going Out

Drinking in Norway is so ludicrously expensive due to the taxes (a glass of house wine will set you back $16) that people tend to start the night with parties at home. Or, when it's warm outside, in one of the city's many open spaces, the most popular of which is Sofienbergparken in Grünerløkka. The party can go on past 10 p.m., which is when it starts to get dark in the peak of summer. But you have to plan ahead: There's only one place to buy alcohol in Norway, the Vinmonopelet chain, and their stores close at 6 p.m. A booze monopoly? Yes: The drinking laws here are very strict about everything. A better and much more economical idea is do what the locals do and stock up on duty-free on your way into the country. As for food, many people have BBQs, but I loved the kebab from Istanbul Kebab. 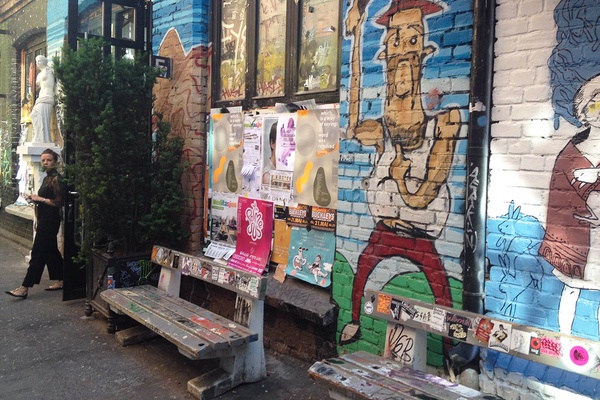 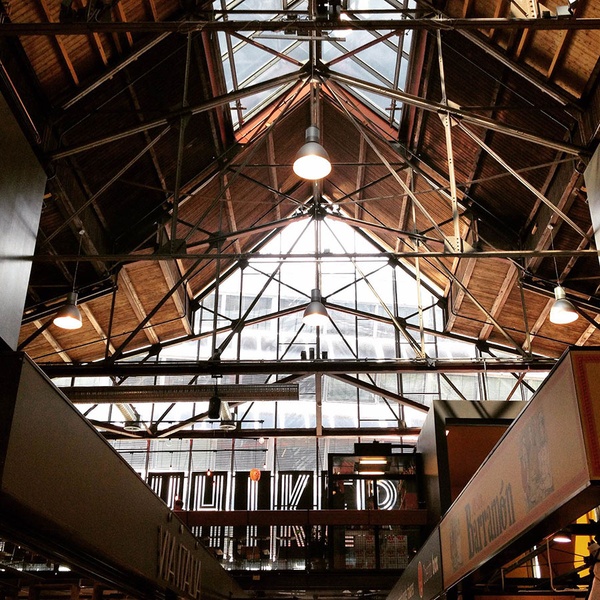 The Hipster Suburb of Grünerløkka

Grünerløkka is filled will nicely designed cafes, restaurants, bars, and a lot of men pushing prams (credit the country's egalitarian paternity leave policies). The architecture is stunning. The surrounding streets are full of great graffiti that blends perfectly into the environment and statues that don't blend so well.

Every day before work, I stopped at Joe & The Juice for healthy drinks and a dose of eye candy: The guys who make the juice are often hired as models. It does feel a smidgen healthier when juice is served by fit and flirtatious young men. For coffee, I could not pass up Tim Wendleboe, the best coffee in town. The design is sleek — and the place makes for great people-watching, especially while slurping iced coffee out of a martini glass.

Grünerløkka is also the main place locals go out at night. Far and away my favorite spot was Hytta Bar (Thorvald Meyers gate 70) for the extensive wine list, a killer gin and tonic, intimate vibe, and mixed clientele. A recent, super-slick renovation draws in the well-heeled and the dive bar regulars of the past. Which makes the whole scene a hell of a lot more fun.

Mathallen, a sophisticated European food hall, became my regular place of worship. Chocolaterias, gelaterias, champagnerias, and a whole lot of other awesome-erias are housed under one roof. When I wasn't overdosing on cheese (it only happened once, I swear), I was spreading the love at Atelier Asian Tapas.

Besides Grünerløkka, I spent a lot of time in Brenneriveien, an edgy complex behind Mathallen that's home to a collective of designers and illustrators. The street is the central hub for graffiti in a city that's very open about street art. I wish I had taken one of the many graffiti lessons offered.

A perfect Sunday looks like this: Grab something from Mathallen, mosy down the street, take in some graffiti, take sufficiently edgy photos so that people know that your trip to Norway is not all about fjords, have a browse through the markets, then head to Blå (pronounced like "blow" without the "w") for funday drinks.

The Traditions of St. Hanshaugen

If graffiti and Sunday shenanigans are not your thing, you may be more in the market for a traditional area where you'll see perfect little houses with perfect gardens and entrances that make you wonder, "Why the hell are the doorways so small when Norwegians are so tall?" If so, head to St. Hanshaugen and my favorite street, Damstredet. 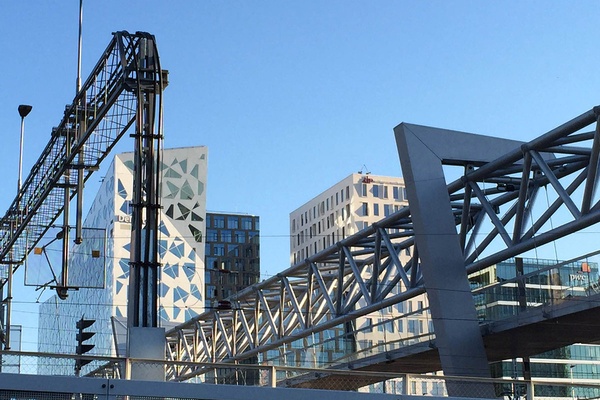 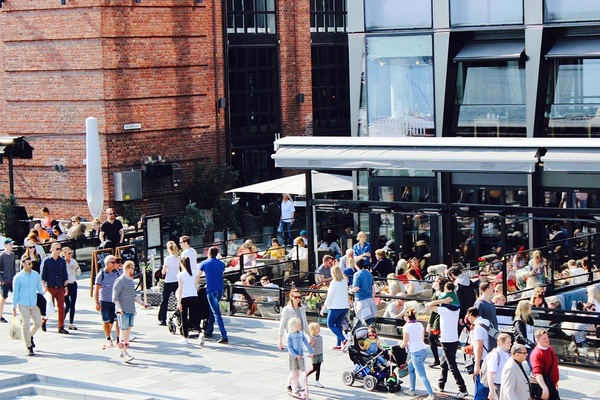 The promenade in Akker Brygge. Photo courtesy of Jarmann Gastropub.

The Decadence of the Opera House and Barcode

You'll marvel at the Oslo Opera House — or should I say "marble"? — as it's made from white Italian marble and a whole lot of glass. It's unmissable and huge and looks like it's floating on the water. And right behind it is the new and highly controversial Barcode Project, a series of high rises whose appearance makes you want to raise your phone and take a scan. Most people photograph Barcode from the front, but it's better seen from one of the bridges at the rear. (The train tracks coupled with the ultra modern bridge look really futuristic.)

Akker Brygge pier is a hive of tourists, high society types, professionals having lunch and after-work drinks, and ladies having lunch (often for so long it turns into after-work drinks). It's also where ferries traveling along the fjord arrive and depart and where cruise ships dock. When the sun is out, the area is busy all day. When it's not, restaurants have awnings extended, heaters ignited, and blankets dispersed.

I liked watching the world go by almost daily at Jarmann Gastropub, a restaurant on the promenade as close to the footway as possible. They have great cocktails, a huge selection of craft beer, and an extensive gin menu. The burgers, specifically the Gastro Burger, are the best I ate in Oslo.

The posh neighborhood of Tjuvholem is perched on the water at the end of Aker Brygge, and every time I went there I felt like I was going to break something. It is home to the Astrup Fearnly Museum of contemporary and modern art, as well as shiny, new glass apartments that hover over some of Oslo's hottest high-end restaurants, like Hanami.

Also on the peninsula is The Thief, a hotel that ranks as one of my top five places in the universe. The first time I went was for a glass of wine with friends at the rooftop bar. The drinks ran longer than expected because our waiter's pretty eyes inspired us to order another bottle. The next time I went back, I had cocktails in the downstairs bar, which was classy without being garish or ostentatious. The cocktails were world-standard: unique, delicious, inventive, and served with flair.

I loved the hotel so much that I decided to spend my last night here before flying home to Austria. Again, what stood out most was the staff. They were incredibly lovely, accommodating, and grounded — even in the sleek and exclusive environment. I strongly suggest staying here at the beginning or end of your trip. The rooms are delicious and comfortable, the view is unsurpassed, and the location is perfect. 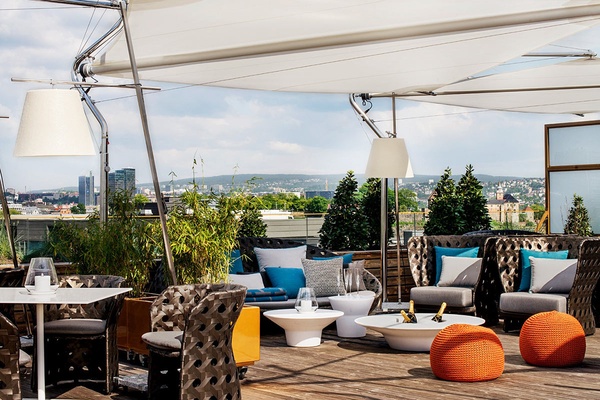 The rooftop bar at The Thief. Photo courtesy of The Thief.

Blink and you'll miss Barfly, a cozy watering hole with pinball and darts and incredible cocktails in the center of the city. One night, my friend and I sat at the bar and requested a cocktail, to which the bartender said, "What would you like?" I challenged him and another bartender to infer what kind of cocktail my friend and I would like just by looking at us. They nailed it. And I mean nailed it: I didn't like my friend's cocktail and she didn't like mine.

Of Course, You Must Eat Fish

As you can imagine, fish in Norway (especially salmon) is mouth-watering, and as I normally reside in the landlocked country of Austria, I ate as much as possible. My favorite fish restaurant was Fiskereit. It isn't located on the water but more than makes up for it with insanely fresh catches and delicate flavors.

Flights to Oslo Airport (OSL) are cheap, and you can also fly to Bergen and explore the fjords on your way to Oslo. For an extended trip, take a boat from Germany to Denmark and then travel through Sweden.

Summer is my favorite, as days are long and get dramatically shorter and colder after September. During the summer, the sun rises at 4 a.m. after only 4-5 hours of darkness. The beauty of this is that you can take an afternoon nap at any time and still have plenty left in the day.

I rented a room off Airbnb, as I like to stay in non-touristy neighborhoods, but as I stated earlier, I would definitely splurge at The Thief if possible.

Oslo's city center is great for shopping. Prices are economical and you get tax back at the airport, as Norway isn't part of the European Union. Also, the weather is special in Norway. Be prepared with an umbrella, a woolen jumper, and a swim suit at all times.