It's safe to say that Portugal is having a moment. But while everyone was looking at Lisbon, one of 2016's hottest travel destinations, Ross Belfer was touring Porto, the port city of Viana do Castello, and the picturesque Douro Valley, the oldest demarcated wine region in the world. Here's why the tapped-in traveler set his sights so far north.

PORTUGAL – Over the past few years, I've developed an unhealthy obsession with Portugal, one that goes far beyond bacalhau, Gothic, Romanesque, and Moorish architectures, and diverse landscapes. This past August, I jumped on a friend's invitation to travel to northern Portugal and attend the Neopop Electronic Music Festival in Viana do Castello. My passions considered, I thought the verdant region, which includes Porto and the Douro Valley, would be the ideal spot to spend my summer holiday. Looking back, all satiated and content, I was right.

Porto, the refined older sister of the extraverted Lisbon, is an adorably hilly city on the cusp of the Atlantic. It is distinctly European without the pretentiousness of Paris and London; effortlessly cool without the contrived scenes of Berlin and New York. The Douro River cuts through the city, while seven UNESCO-protected bridges intersect swathes of cafes, wine bars, nightclubs, galleries, museums, and clandestine cultural gems. I was engulfed in Porto's laissez faire character and charming streets, which were almost reason enough to play hooky on the wine and seafood calling my name from the Douro Valley. But outside the city, a world of thermal springs, local tascas (taverns), and undeniable calm beckoned. 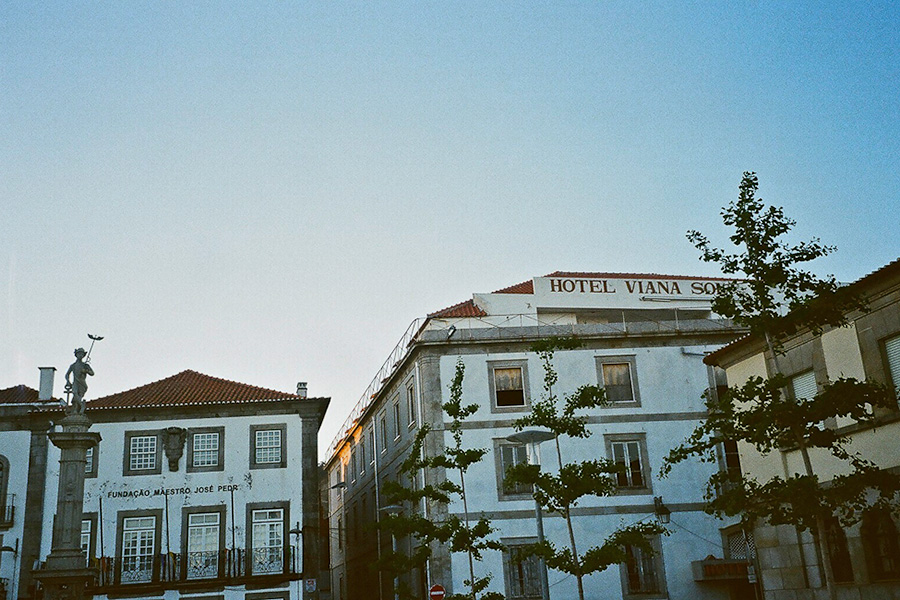 A typical view in Viana do Castelo. 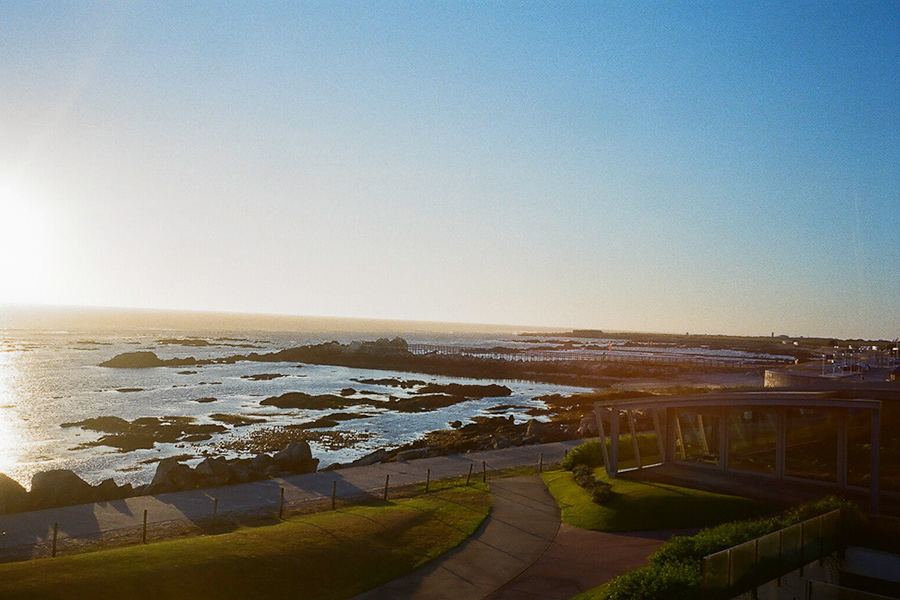 The Atlantic, seen from Viana do Castelo. 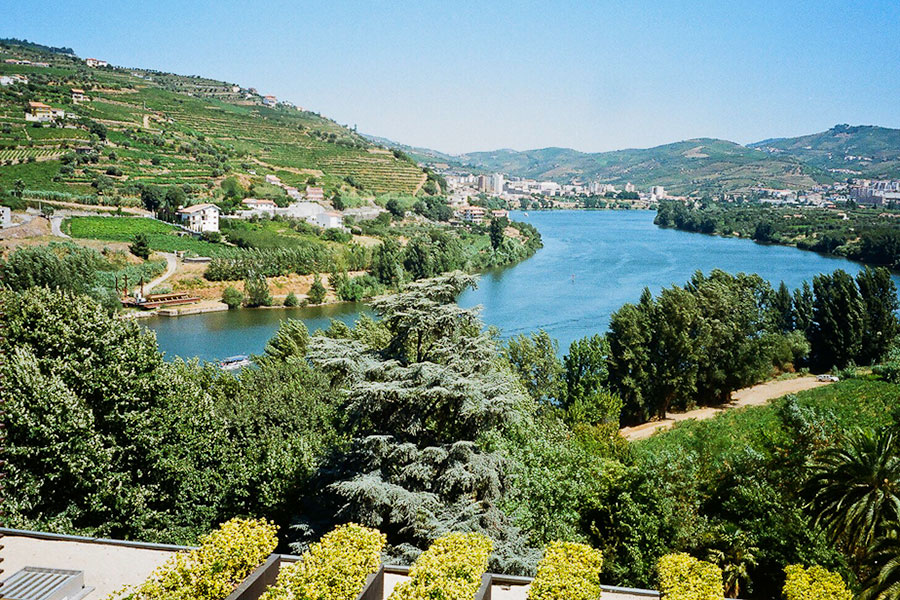 One of the biggest joys of exploring northern Portugal was actually getting there. From Lisbon, a 3.5-hour, WiFi-enabled train ride north through the countryside dropped me off in the center of Porto, close enough to walk to hotels like The Artist and popular restaurants like Shiko, Portarossa, and Tasca da Badalhoca (Rua Dr. Alberto de Macedo 437; +351-22-618-5325).

The lush Douro Valley resembles a swirling painting of green, blue, red, and orange-tinged countryside with scenes of elegant bridges stretching across the Douro River. Trains are inexpensive and relatively comfortable, but to experience the full gamut of wineries, eateries, far-flung towns, rivers, and thermal pools the valley has to offer, traveling by car is the way to go. Cars will most often be manual.

Eat. Drink. Wander. Repeat. Top-notch seafood and daily caught fish are commonplace along the coast, as are surfers in wetsuits and Baroque-era churches. On Saturdays, many of the small towns throughout the region host flea/antique markets (feiras) selling all sorts of knickknacks, zeitgeist items, and vintage treasures that are splurge-worthy without being too expensive. I returned home with 1970's coffee mugs, handmade aloe vera soap (a Portuguese staple), and five bottles of Taylor's Fine White Port (please don't inform the authorities).

WHAT TO DO IN PORTO

Scope Out Bridges
The architecture freak that I am, witnessing the seven stark bridges of Porto demanded diligent exploration. I walked down the river bank and marveled at the intimate tascas, random street vendors, and colorful scenery, then stopped for a bite at Casa d'Oro (Rua do Ouro 797; +351-22-610-6012). The pizza joint has an upstairs patio and serves solid olive and mushroom slices and cold Super Bocks with excellent bridge views for no more than €7.

Search for Souvenirs
I'm obsessed with throwback heritage goods, so a visit to the Porto outpost of lifestyle store A Vida Portuguese was a must. I spray-tested just about every bottle of Claus Porto cologne in store. Each was perfectly displayed, colorful and ripe, (I eventually settled on the original scent). Capping off the visit, I wrapped myself in a Mantecas wool blanket made in the mountain village of Manteigas, Serra da Estrela. 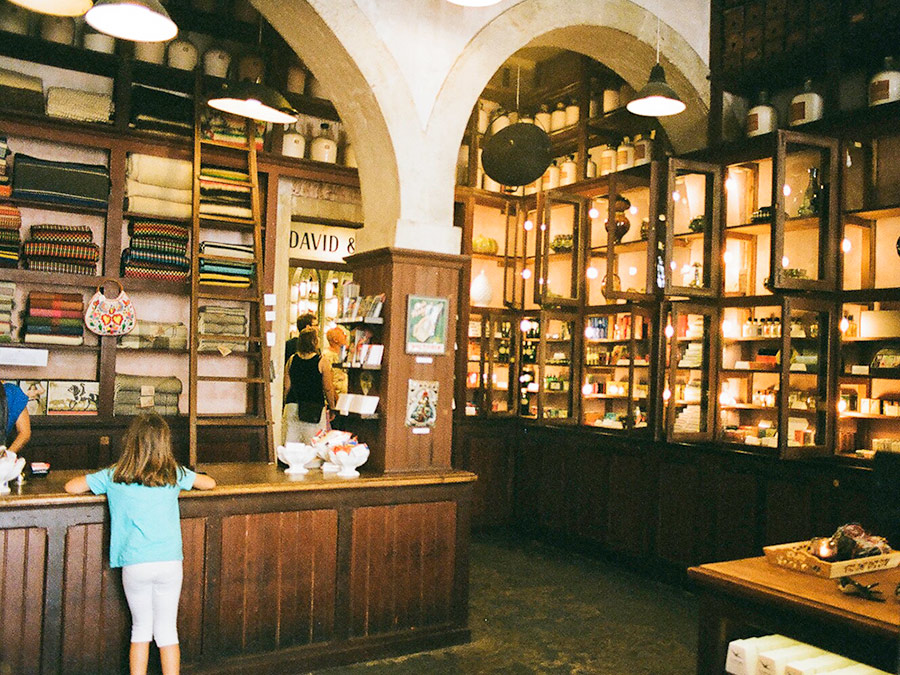 Inside A Vida Portuguese. 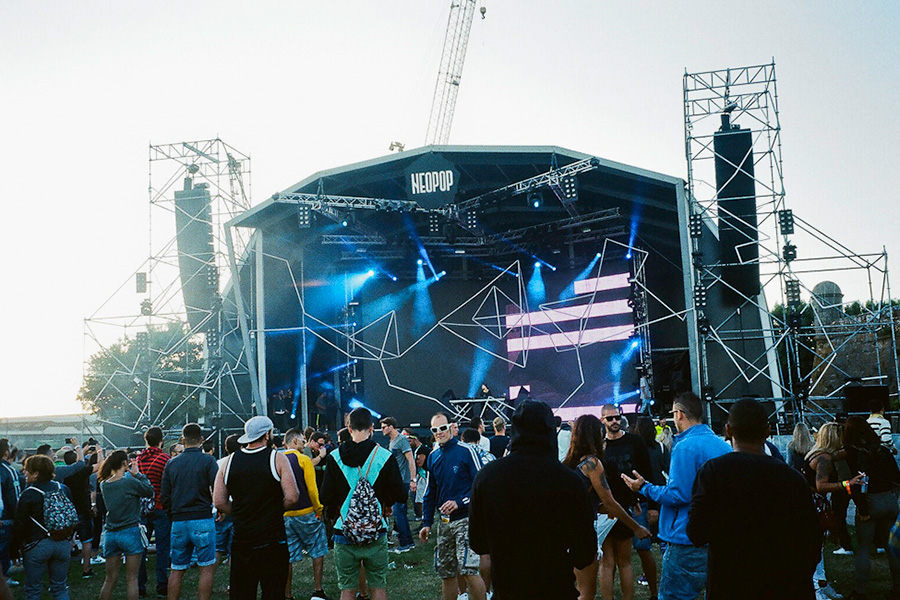 A scene from Neopop Festival 2016. 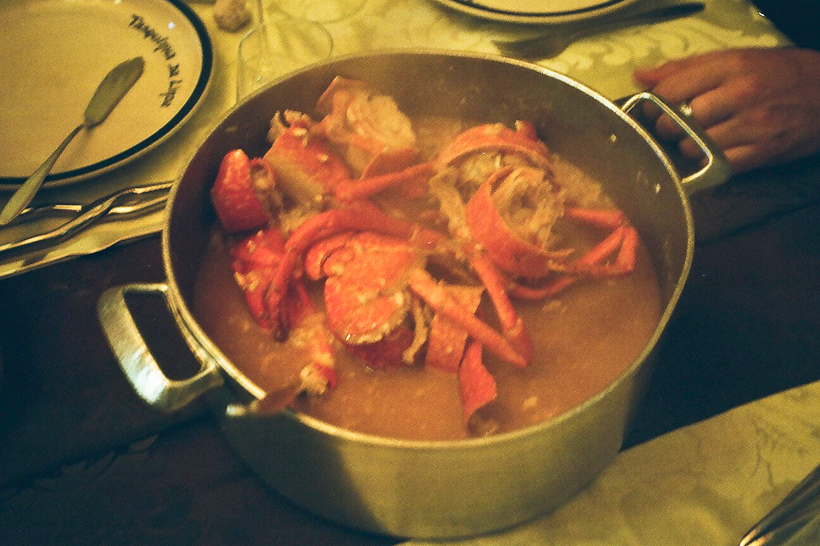 WHAT TO DO IN VIANA DO CASTELO

Bust a Movement
I was schooled in the art of electronic music at the 11th consecutive year of Neopop Festival, the balls-to-the-wall, three-day party that usurps the port and harbor of Viana do Castello, a sleepy Atlantic town 25-miles from the Spanish border. The food in this area paralleled the quality of musical performances, both of which deserved three thumbs of up. When I wasn't bumping to acts such as Carl Cox, John Talabot, and Sensible Soccers, I was wandering the cobblestone streets and charming crevasses of the historic town. I started each night with a satiating meal of bacalhau, lobster, sardines, and other local dishes that combine what is among the best seafood on the planet.

Rediscover Seafood
Guided by Porto producer and Neopop Festival founder Gustavo Pereira, I entered Tasquinha Da Linda and what would be one of the most surreal seafood experience of my life. Preserving generations-old recipes native to Viana do Castello, chef and owner Linda rolled out a massive pot of savory and tangy slow-cooked lobster and rice matched with a massive tray of rock shrimp, muscles, barnacles, and razor clams. Let's not forget the bottomless pitchers of vinhoverde, a young, green-tinged wine native to the region.

That was the blow-out, but 'ole reliable was the heralded seafood restaurant O Pescador (Largo São Domingos, No. 35; +258-826-039), which I discovered while panic-level famished, standing in a dimly lit square looking for sustenance. A kitschy chef-statue outside of the restaurant gave way to white-clad tables hosting bottles of vinhoverde, sardines escabeche (in vinegar), polvo grelhado (grilled octopus), arroz de tamboril (seafood rice), and house bacalhau doused in a deep red sauce. The family-based staff and homestyle dishes demanded our return night after night.

Climb to New Heights
Santuário de Santa Luzia is a neo Byzantine-era cathedral in the nearby town of Minho that towers over Viana do Castelo like a ruling pressence from above. Giving up on the original plan to trek to the top by foot, a careening drive revealed a magnificent setting of ruins and ornate, stone carvings that made up the massive vestibule. After a dash of a prayer, I took a donation-based elevator ride to the top pillar for a breathtaking western view of the valley, river, and city. Nearby, Pousada Viana do Castelo was the ideal setting for porto branco e tônica (white port and tonic) and a plate of olives to combat my mild hunger. 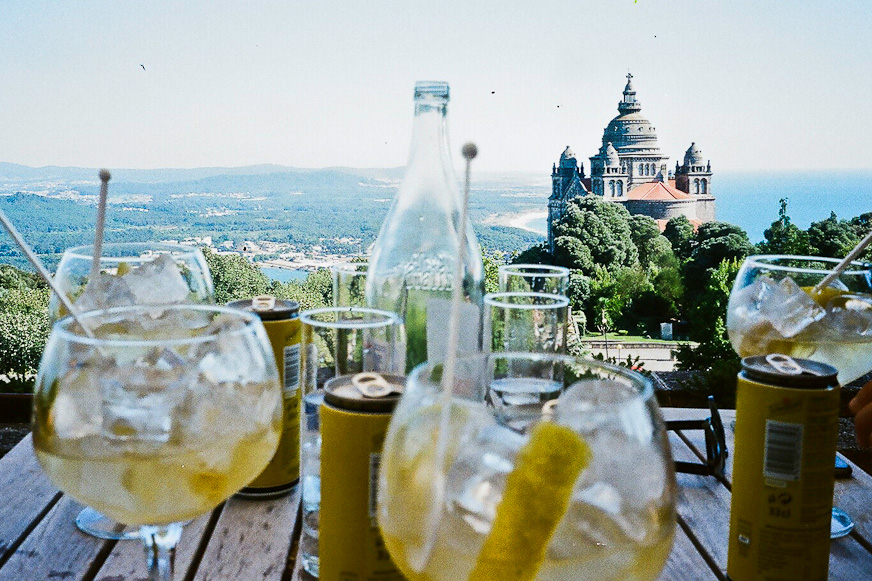 Drinks at Pousada Viana do Castelo. 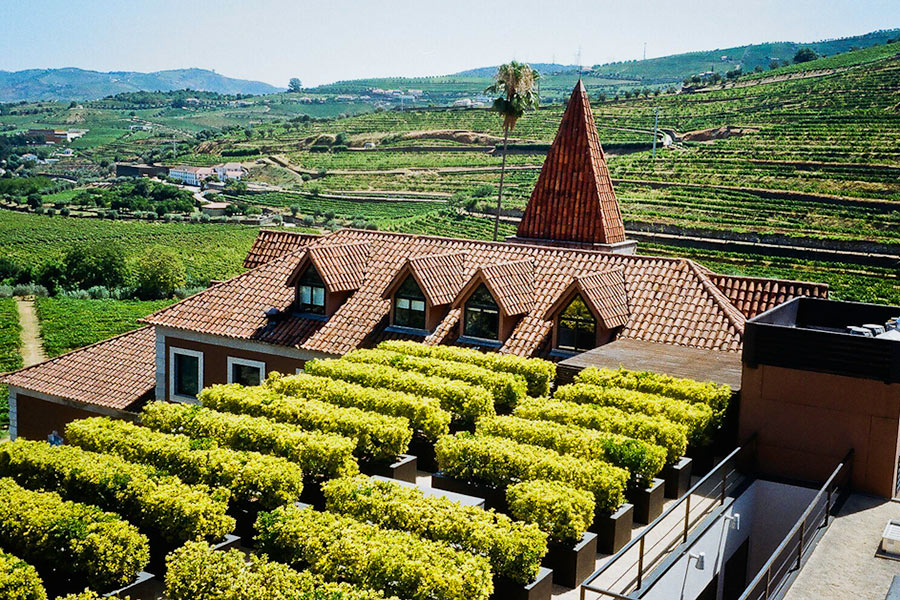 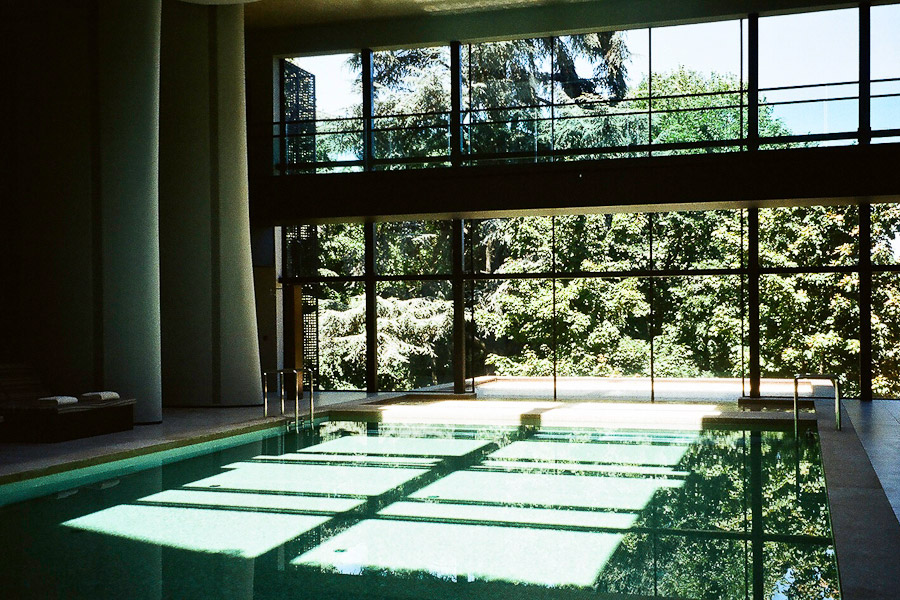 WHAT TO DO IN THE DOURO VALLEY

Six Senses Douro Valley
The other-worldly spa resort is a destination in itself: My stress and weight of mind began to evaporate after my first few hours. The property, transformed from Aquapura at the helm of Lisbon-based architect Pedro Duarte Silva, blends into the landscape and highlights the surrounding natural eye candy. Interiors are mostly glass ensnared with East Asian influences. The spa is a wonder, as I discovered upon entering the Vitality Chamber — a modern take on the laconicum cell, a dry sweating room from a Roman bathhouse. (I felt like using it had added years back to my life.) Between long naps in my suite, guided meditation workshops, and incredible meals coupled with regional wines, my stay felt like what heaven should be.

Longroiva Hotel & Thermal Spa
On the northeastern cusp of the Douro River lies the recently opened Longroiva Hotel, where the art of relaxation is martial law. The 19th-century main building, preserved and restored by Luis Rebelo de Andrade so meticulously that it is nominated for a Portugal Travel Award 2016, was once the original thermal spa serviced by the town of Mêda (population 200). My modest and elegant room was fashioned in warm wood finishings and subdued colors that easily gave way to what I needed the most: chill and sleep. After I managed to jettison myself from bed, I passed through angular passageways and architecturally brilliant corridors to the outdoor pool and lawn space before entering the main attraction: an indoor thermal pool with mineral-rich water extracted from the ground, channeled and filtered into a detoxifying experience that is both physically and mentally restorative.

Pedras Salgadas Spa & Nature Park
An overnight stay in an eco-conscious tree house designed by Luis Rebelo de Andrade is one of the greatest experiences I've had to date. The houses are just fixtures in the verdant park where they are stationed, which is dotted with thermal water wells that are historically known to cure stomach ailments. I wandered around the property for hours each day, training my eyes on the Asian-influenced spa house with its indoor pool, the restored "Casino" edifice from the early 1900s that now serves as a multi-purpose space, and the small restaurant and bar that literally descends into the ground. Regardless of the extra effort needed to reach the park, it was beyond worth it. 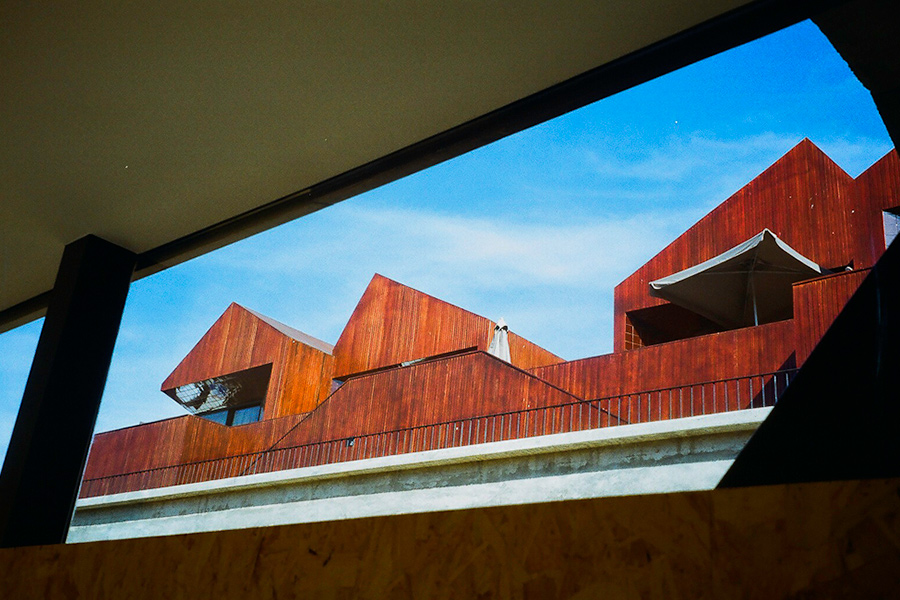 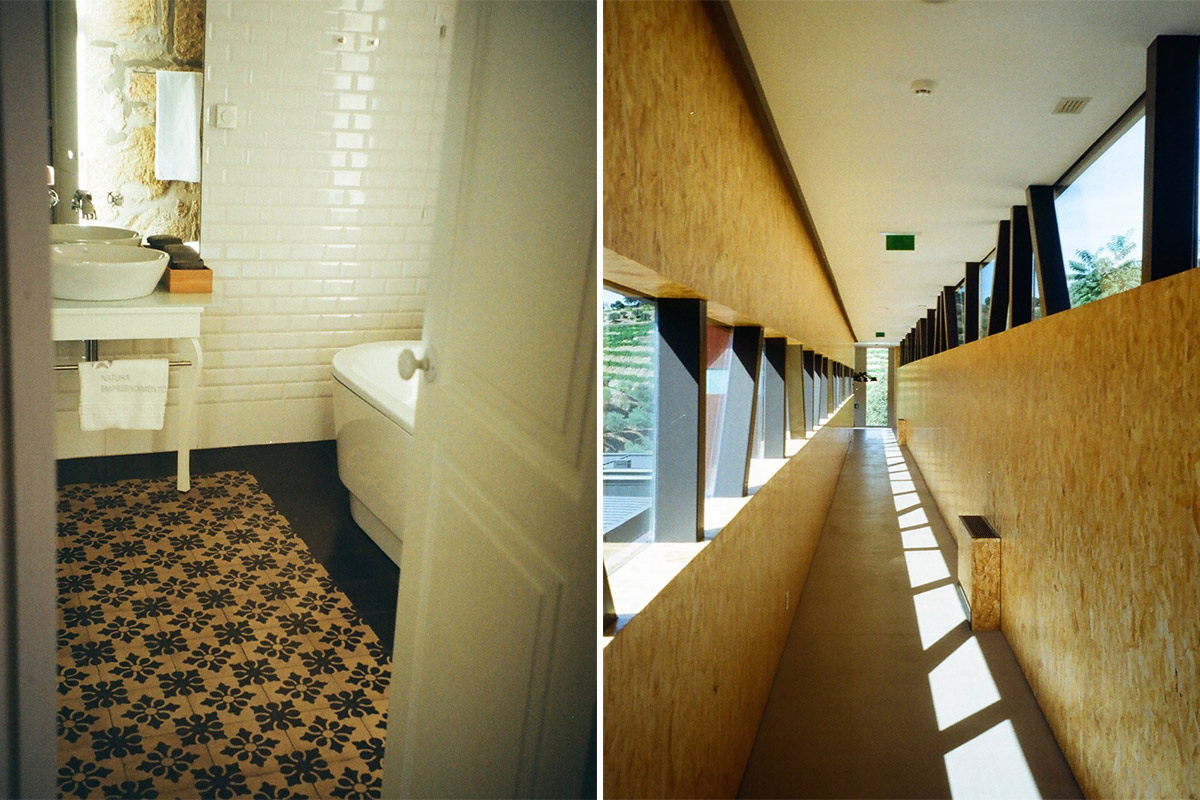 Bathroom and hallways details from Longroiva.

Train Your Eyes on Portugal
Finding Luxury Amongst the Ruins of Lisbon
The Living is Easy in Cascais, Lisbon's Charming Coastal Neighbor