Fathom's Daniel Schwartz recently came back from his first trip to Israel (and no, it wasn't on Birthright) with five reasons to make a return pilgrimage to the Holy Land. Lo and behold, none of them have to do with religion.

ISRAEL – If you couldn't tell by my last name, I'm Jewish. After years of dodging suggestions that I sign up for Birthright, mostly from my father, a cantor and leader of a congregation in Jackson Heights, Queens, I finally took my first trip to Israel — a one-week tour of the country's greatest attractions organized by the Israeli Ministry of Tourism.

I was raised religious, but now consider myself an agnostic. And though I've heard cool things are happening in Israel, I've always associated the Holy Land with religious pilgrimages. But what was I thinking? The country draws international attention for (among many things) its creative and culinary happenings, legendary nightlife, and natural attractions.

With three nights in Tel Aviv, two in Jerusalem, and one in Tiberias, I only scratched the surface of the scene, but I learned that I didn't need to believe in a higher power to make a pilgrimage to the Promised Land. In a melting pot of many cultures, cuisines, backgrounds, beliefs, and landscapes, I could be religious about almost anything. 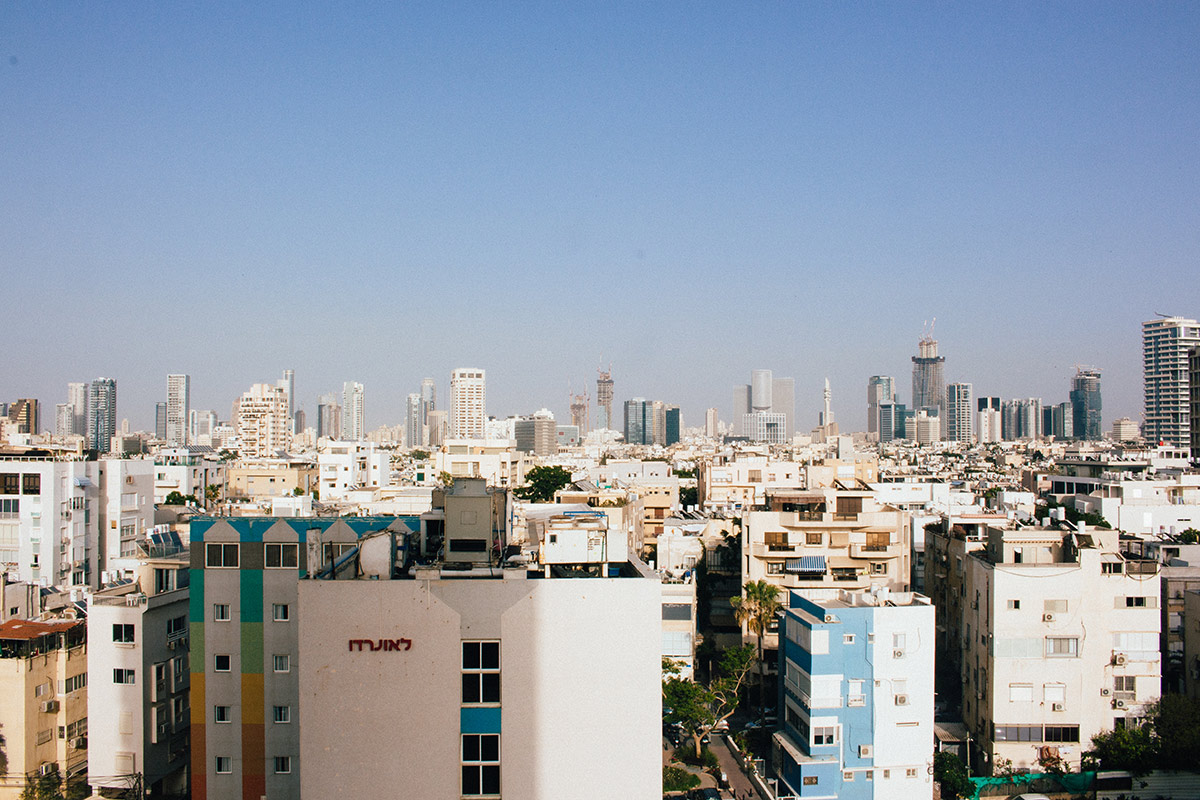 The skyline of Tel Aviv. 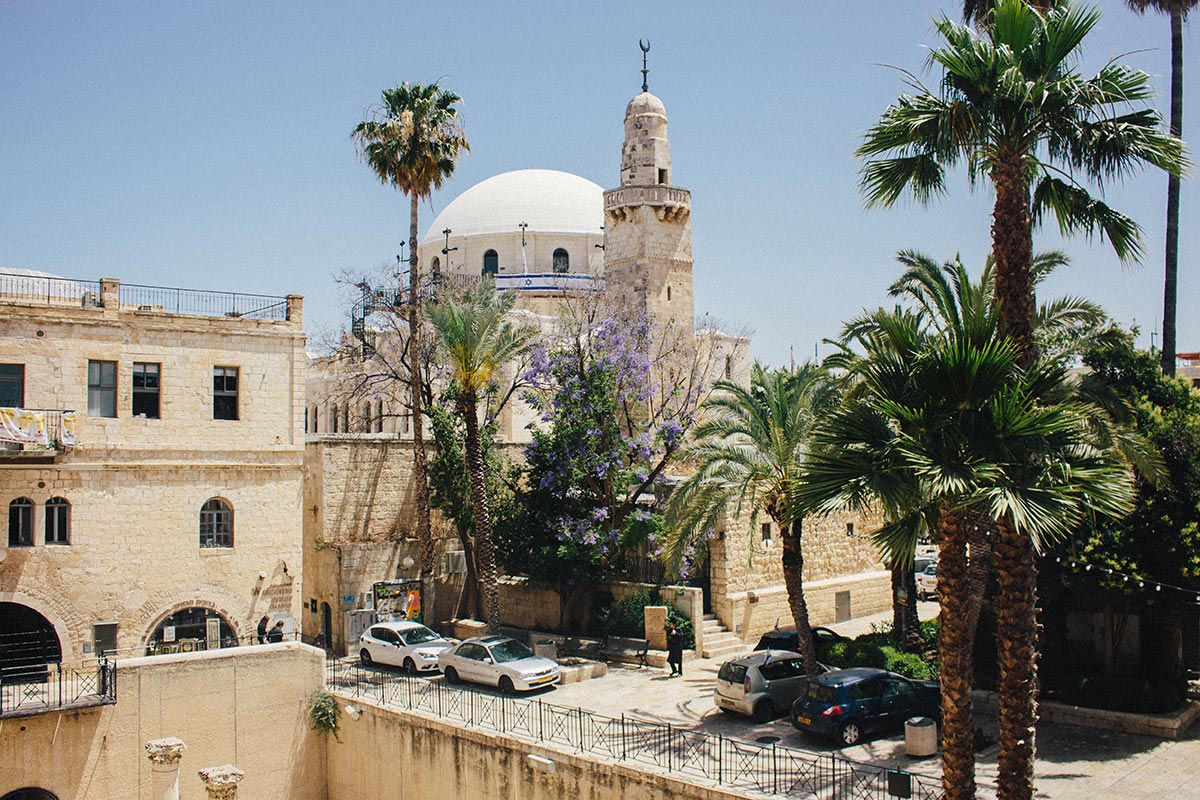 Architecture in the Jewish Quarter of Jerusalem. 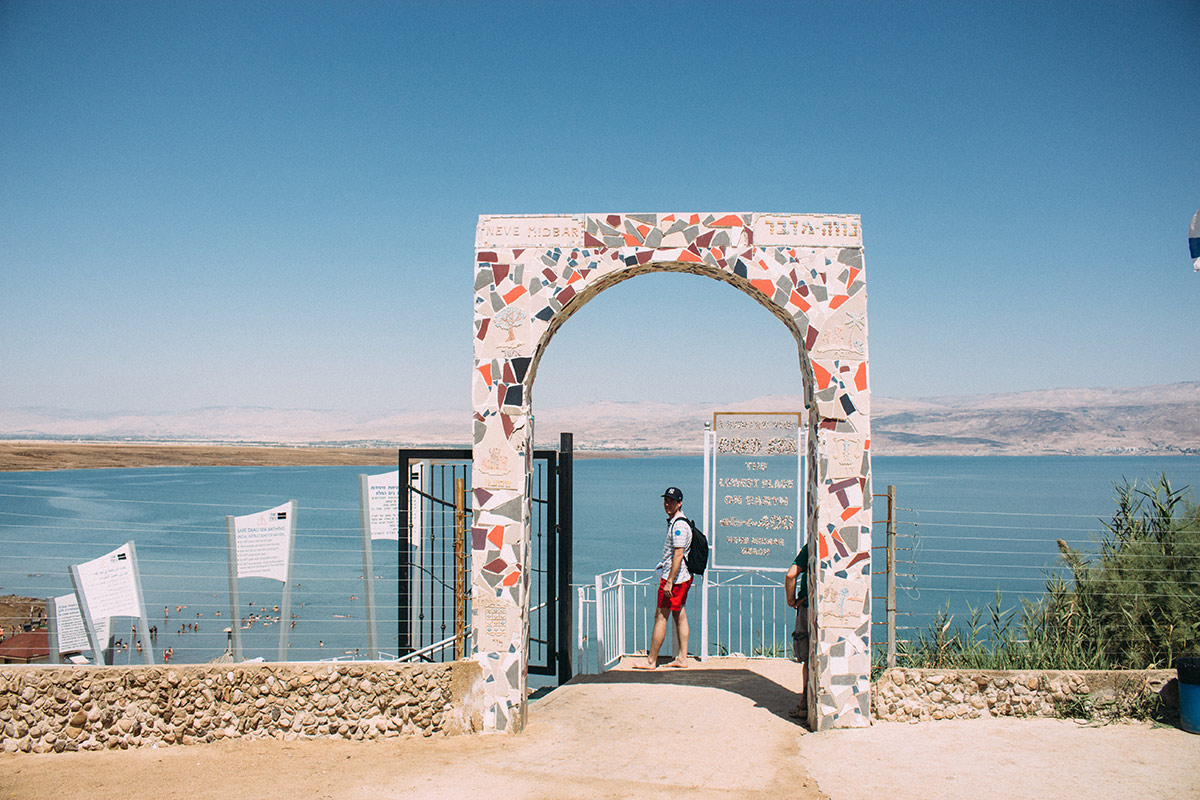 Neve Midbar, an access point to the Dead Sea on the Israeli side.

BOW TO THE BAUHAUS (AND THEN LOOK UP)

The religious relics of Jerusalem were as magical as I was told they would be. The White City of Tel Aviv, a preserved collection of 4,000 Bauhaus buildings scattered throughout the city center, was as photogenic as the brochures promised. But what made me fall for the architecture of Israel were the details I didn't see coming. The castles and minarets of Acre in the Western Galilee, once the capital for the Crusaders who ruled Israel in the late Middle Ages, now a seaport town peacefully inhabited by both Jews and Arabs. The divine dome of the Hanging Gardens of Haifa, a paradisiacal shrine and garden dedicated to the founder of the Bahá'í faith that rests on the slopes of Mount Carmel. The iconic, eclectic, brutalist, and adopted styles of architecture that make up the skyline of Tel Aviv, a beautiful juxtaposition of rising development and decaying real estate. And that was just the tip of the iceberg.

POUR A GLASS, LEND A HAND.

It's no secret that Jewish people love vino. (Have you been to a Seder?) And it makes sense that Israel produces great wine. (Have you seen the Mediterranean?) I just never tried good kosher grapes until I visited Tulip Winery, the largest boutique winery in Israel, on the northern slopes of Mount Carmel. Their story struck me first: The social enterprise integrates locals from Kfar Tikva (Village of Hope), a nearby pastoral settlement for people with special needs, by putting them to work in wine production, bottling and packaging, and customer relations. Then came the booze, a medley of award-winning white, white franc, and red wines that tasted nothing like Manischewitz (thank God) and were light enough to drink before noon. The result: one of the most touching vineyard experiences I've ever had. 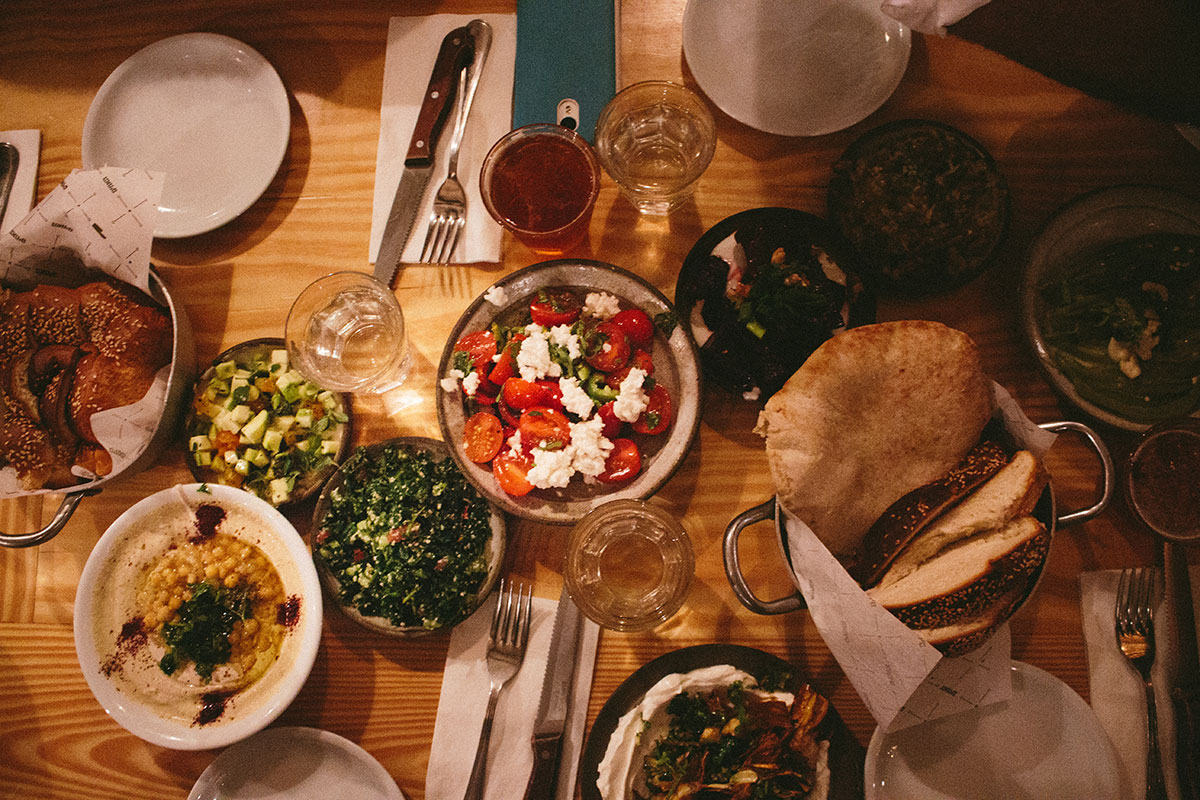 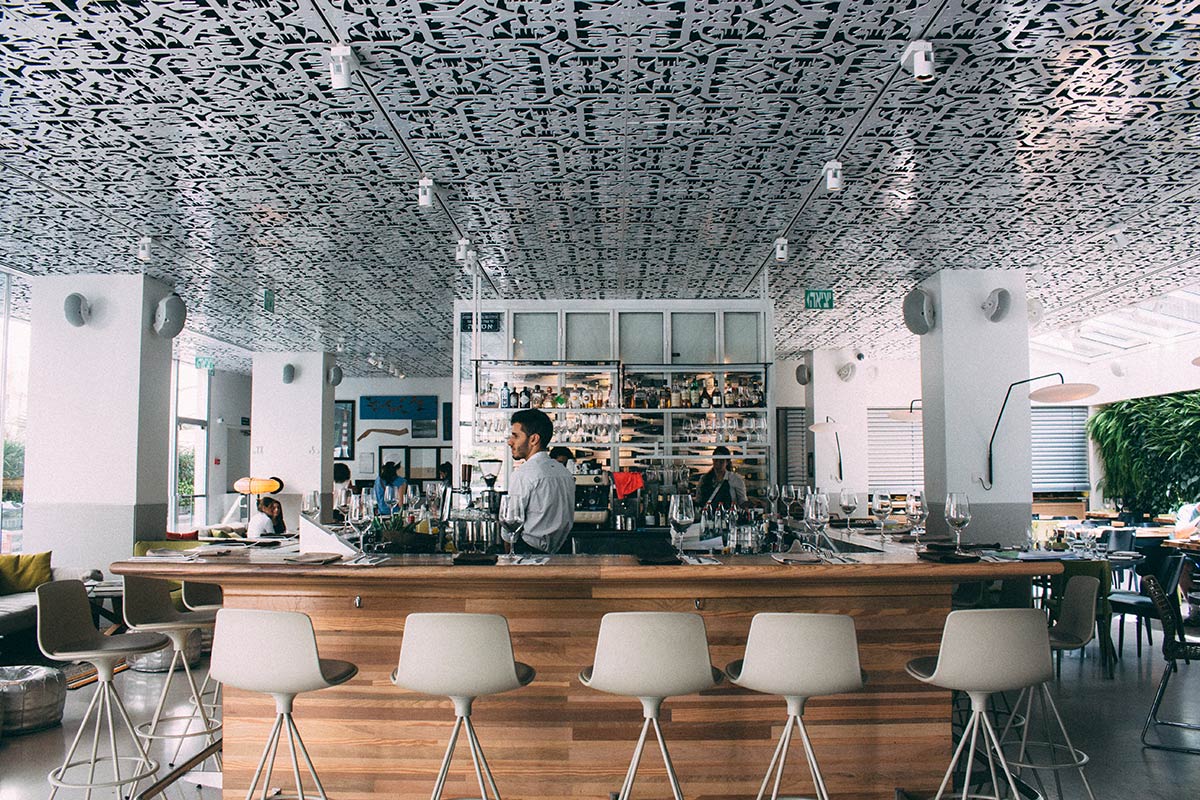 The Mendeli Street Hotel lobby with Mashya and the green wall in the back. 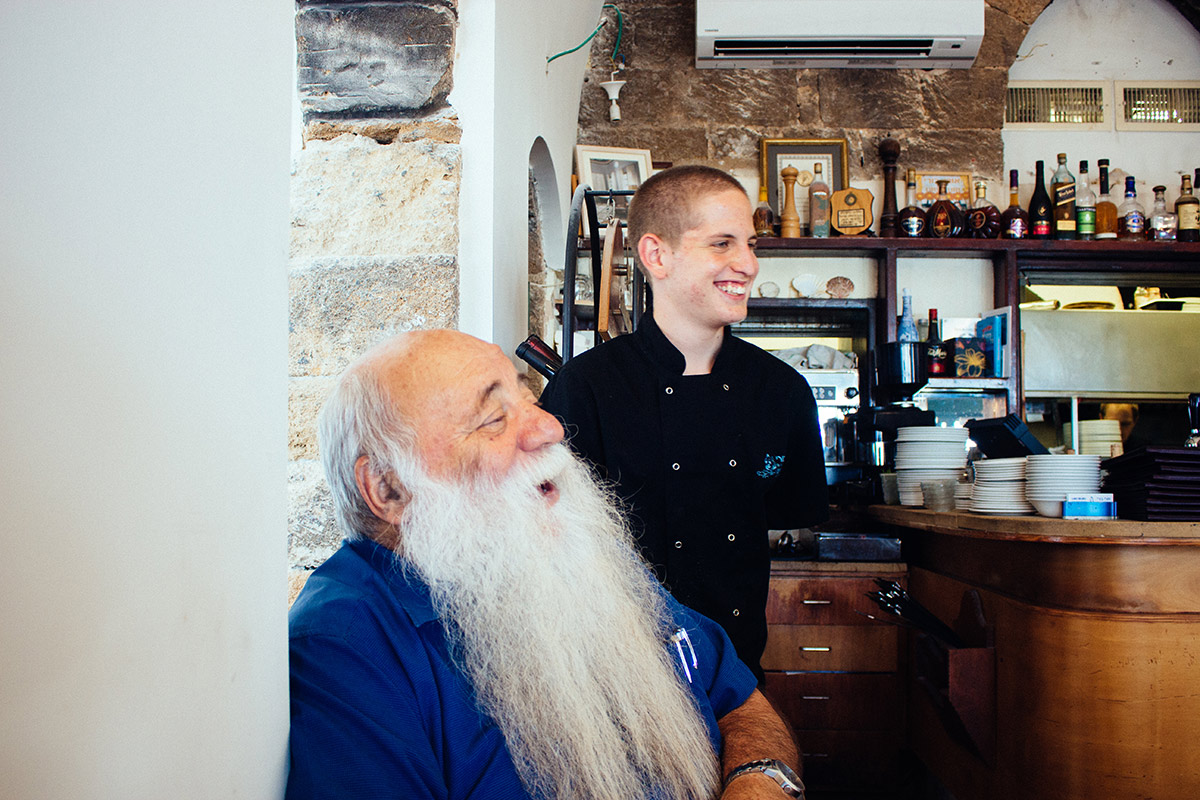 Iconic Israeli chef Uri Jeremias and his grandson at Uri Buri in Acre.

BLESS THY BODY AND THY SPIRIT

Despite the local obsession with eternal salvation, it was easy eating clean and finding balance (in this lifetime). Israeli cuisine is Mediterranean and not as heavy (and salty) as American Jewish food. In Tel Aviv, there are juice bars every few blocks and enough fruits and vegetables on the city's top menus to play vegan without even noticing. Two of my favorite meals were primarily plant based — dinner at Ha'Achim and brunch at the greenroom restaurant Mashya in Mendeli Street Hotel. And I'm a serious carnivore.

There was no denying the restorative benefits (and the novelty) of floating caked in mud in the Dead Sea, regardless of how many tourists were doing the same. But I found much better peace of mind driving through the countryside, my eyes glued to the rolling hills of the Upper Galilee, the sweeping valleys of the Negev, and the storied atmosphere of the Judean Hills. Next time, I'll get outside to hike in the up-and-coming wine region of Golan Heights, or camp on the beautiful banks of the Sea of Galilee, a massive lake that doubles as a popular domestic retreat destination.

BREAK BREAD IN THE LAND OF MILK AND HONEY

Over the last few decades, Israeli chefs have switched their approach from trying to emulate heavy European recipes to embracing and innovating on the fresh produce and flavor profiles of the Mediterranean and the Middle East. Among the old spice shops and trendy restaurants in Tel Aviv's Levinsky Market is Cafe Levinsky 41, a counter operation doing fresh riffs with fresh herbs and fruit syrups on gazoz, a flavored soda that dates back to the beginnings of Tel Aviv. And just down the block is Yom Tom Delicatessen (Levinsky 43; +972-3-681-3730), an alternate universe Jewish deli from Istanbul spotlighting Italian olives, Iranian sweets, Balkan appetizers, and cheese-filled hibiscus flowers from heaven. The founder's grandson Yomi also runs Gela (Levinsky 47; +972-054-682-2020), the first vegan gelato joint in Israel. God bless.

And I can't talk about Israeli cuisine without singing praises for Uri Jeremias, the fisherman and famous self-trained chef behind beloved Uri Buri Seafood Restaurant (Ha-Hagana Street 11; +972-4-955-2212) in Acre, who invited our weary group into his restaurant, a former Turkish bathhouse, for a dose of biblical hospitality. What started with espresso turned into a tasting prepared by his teenage grandson, who already knows how to cook the restaurant's menu. Small plates like salmon sashimi finished with wasabi ice cream, labneh wrapped in sun-dried watermelon, and mango sorbet annointed with high-grade local olive oil were so balanced and evocative they could have passed for manna. 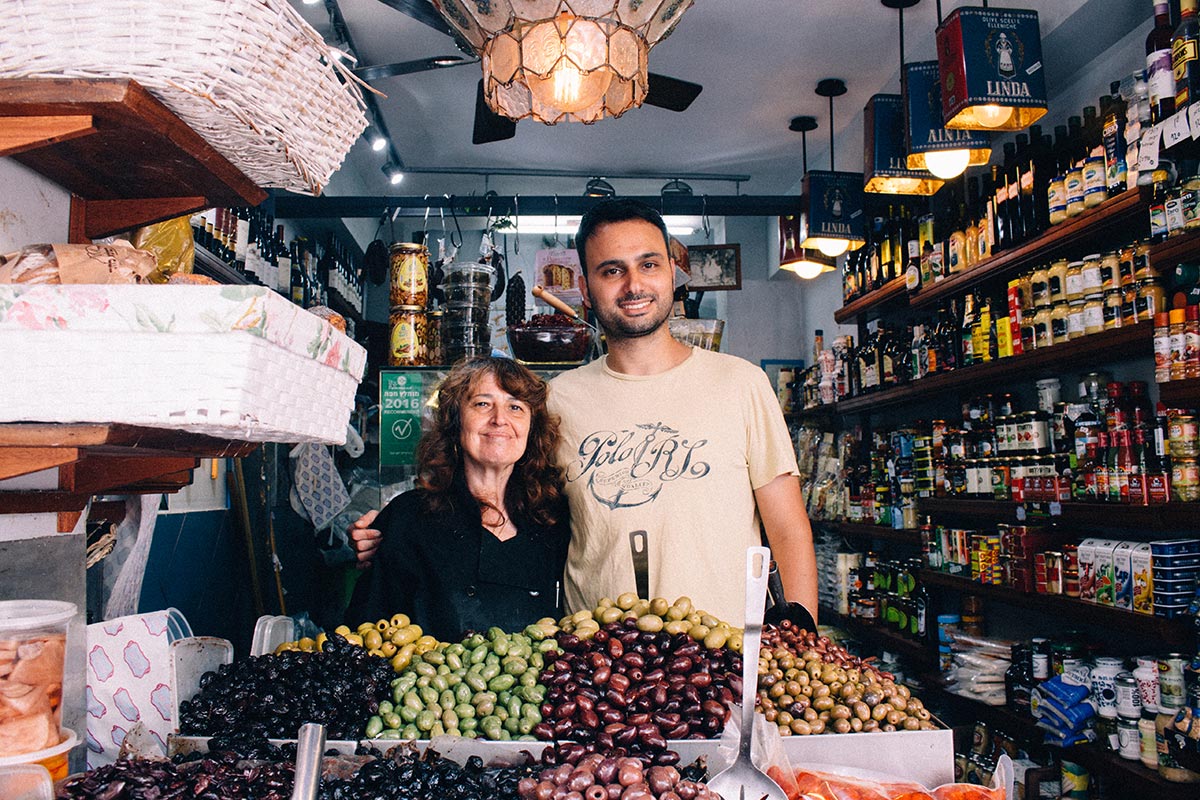 Yomi (and his mom) of Yom Tov Delicatessen in Tel Aviv's Levinsky Market. 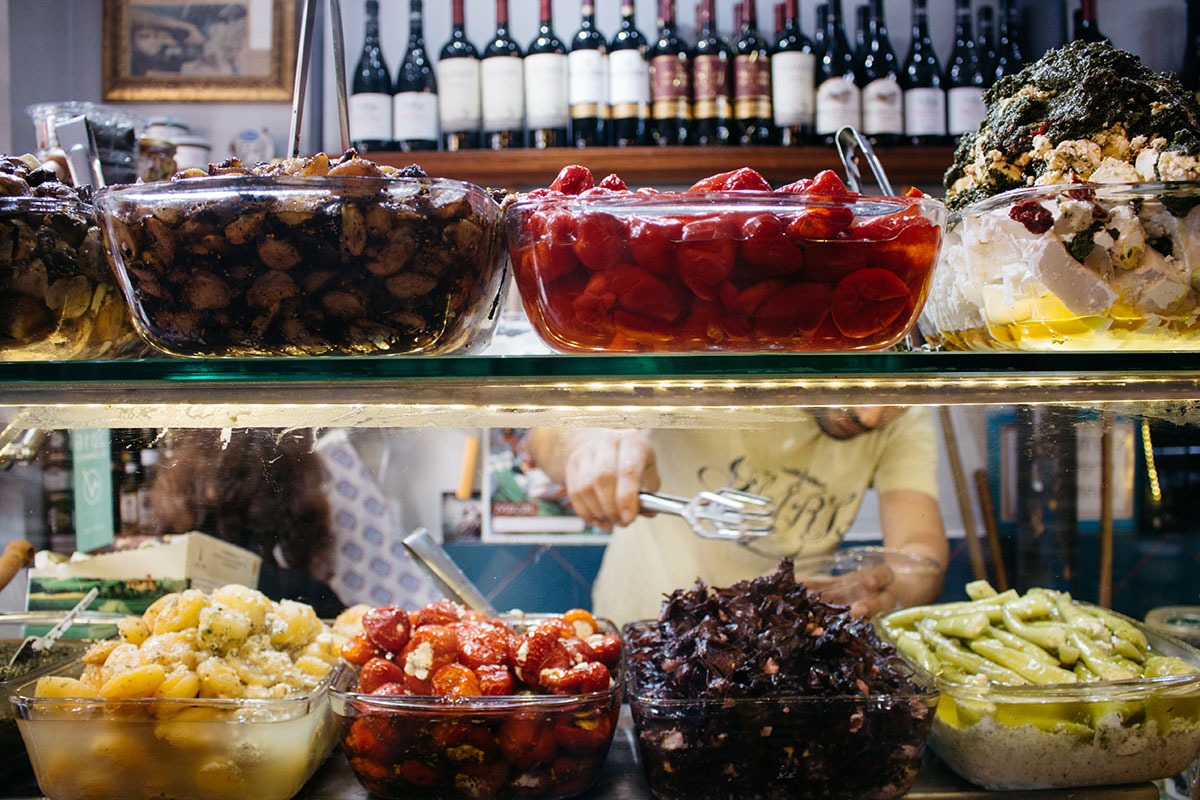 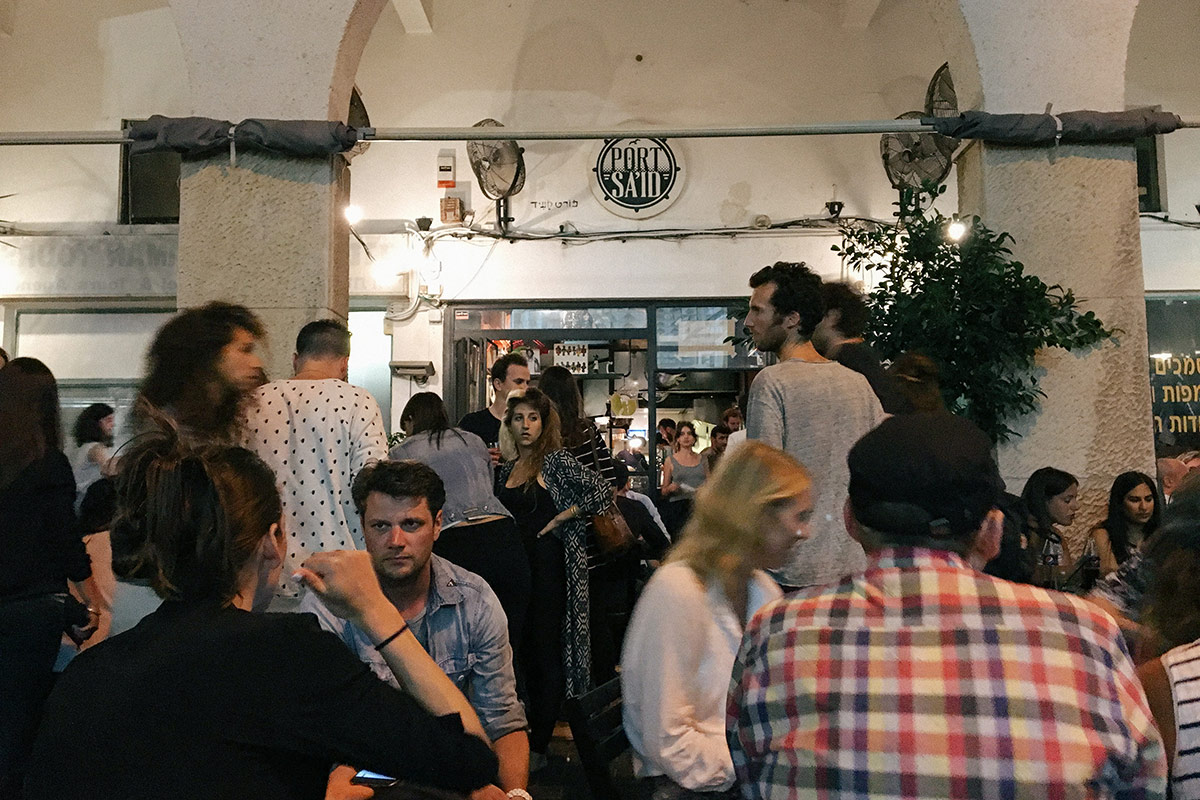 The scene at Tel Aviv's Port Said. On a Wednesday night.

Going out is religion in Tel Aviv. I was told repeatedly (and very sternly) that I couldn't leave the city without experiencing its world-class nightlife. So I followed orders and spent two consecutive nights on the town. The first started at Sputnik, a hipster hotspot with a backyard that could have been imported from Bushwick, Brooklyn, and ended at Kuli Alma, a multi-room club and killer music venue where I spent most of the early morning inhaling secondhand smoke while bumping to an Israeli rock band fresh off the boat from SXSW. (Score!)

I paced myself the second night and spent most of my time loading up on simple dishes like ratatouille, grilled fish, and short rib with tahini at Port Said, a lively bar and restaurant from famous Israeli chef Eyal Shani. The watering hole, located in a parking lot in front of Tel Aviv's Great Synagogue, is a nightlife institution and a great place to watch locals who haven't changed since the 1980s smoke cigarettes and drink Goldstar. I had to wake up early the next morning, so I stopped myself after two more bars: Otsar, a small spot with an awesome DJ next to Port Said, and Rothschild 12, a local favorite where live jazz and a tasty Tom Collins was, relatively speaking, a chill way to cap the night.