Thanks to an increased sense of safety, Colombia's vibrant capital city is drawing in travelers who want to experience its burgeoning art scene and world-class restaurants. Pro traveler Allison DiLiegro shows us around.

BOGOTÁ, Colombia – Maybe it's the artsy vibe, the cutting-edge culinary scene, or Netflix's Narcos, but Bogotá is fast becoming a cool kid capital. Safety concerns kept tourists away from Colombia for decades, but the country's cultural heart kept right on beating. Now, crime is lower than it's been in years and yes, Bogotá feels safe. But it also feels cosmopolitan, sophisticated, and vibrantly alive.

The Andes make a spectacular backdrop, shooting high above the city's staggering 8,675-foot elevation. Spanish colonial facades bump up against sleek modern restaurants. Street art splashes the walls leading up to some of Latin America's best museums. A day of highbrow culture and cuisine easily unwinds into a night of lowbrow local fun. (Bogotanos know how to have a good time.) With days like these, it's easy to feel like you're on top of the world. If anything, you're a few thousand feet closer. 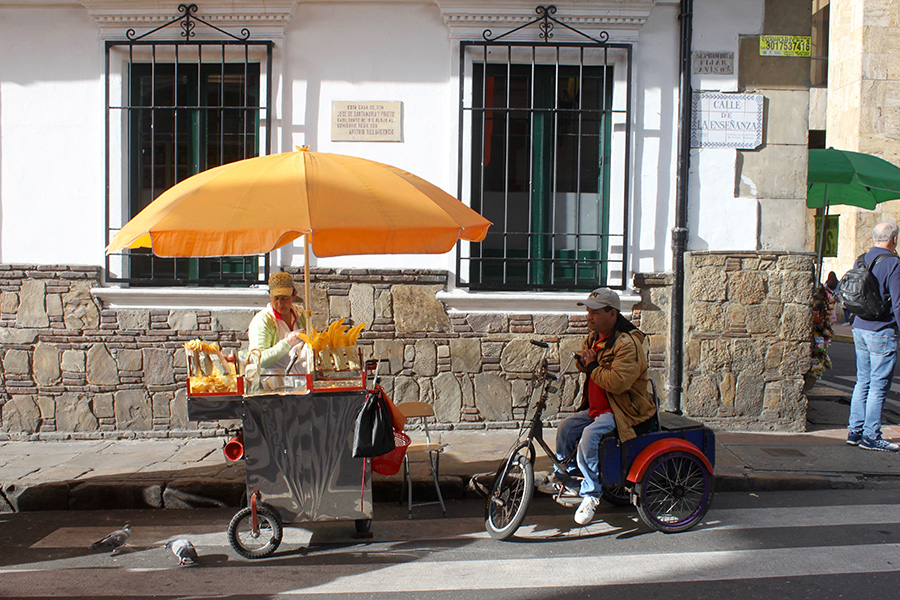 Save room to sample the local street food cuisine.

Lay of the Land
Bogotá rambles and sprawls over 600 square miles of hilly land. Traffic can be crippling; thankfully most of the top attractions, restaurants, and shopping aren't too far from the city center. Most of the city's museums are found in La Candelaria, the charming historical center. North of La Candelaria lies Chapinero, a more affluent area. Here, you'll find Zona G (short for "Gastronomy") and Zona Rosa, the epicenter of nightlife and upscale shopping. Further north is Usaquén, a moneyed enclave with a cute colonial center, great restaurants, and a Sunday market.

What You Knew On the Last Day That You Wish You Had Known On the First
When rush hour traffic gets you down, you can actually navigate the city a lot faster with the bus. Admittedly, the TransMilenio is crowded and not the easiest system to learn (the TransmiSitp app will help). However, the bus uses two dedicated car-free lanes so it can fly by stalled traffic. 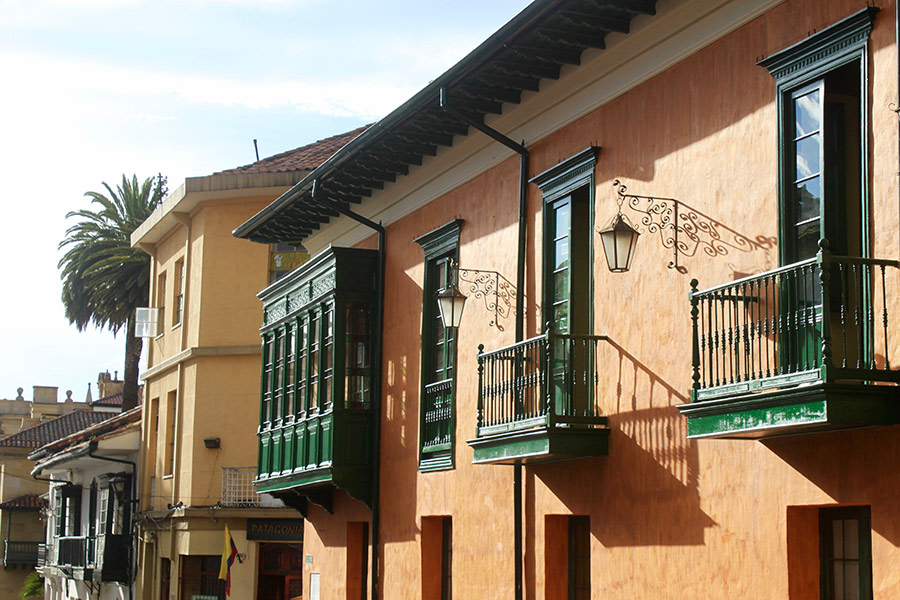 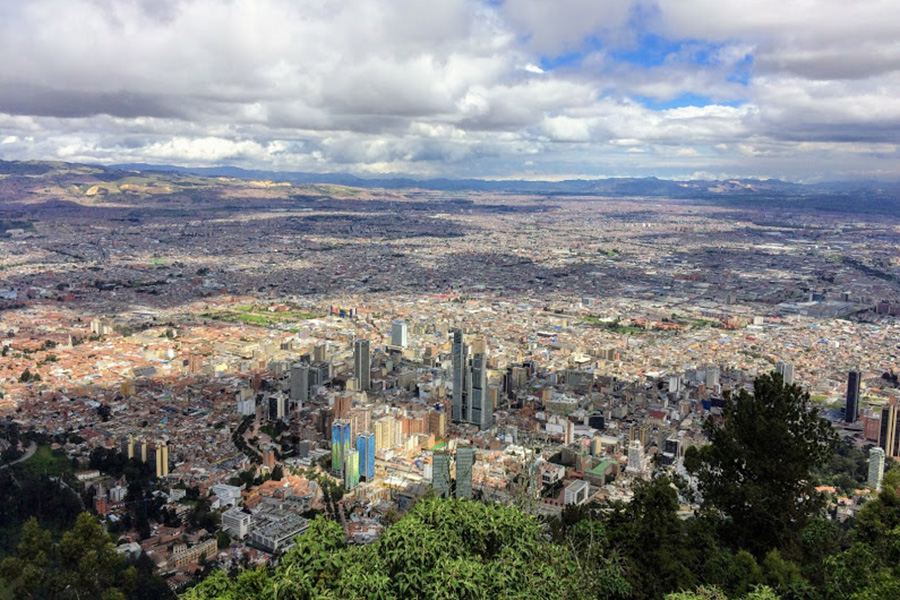 A nice view of the city from Mount Monserrate.

Morning Fuel
La Puerta Falsa (Cl. 11 #6-50; +57-12-86-50-91) has been in business since 1816, and it looks like it (in the very best way). Just off the Plaza Bolivar, it's the perfect place to try the chocolate completo, a Bogotano snack of hot chocolate, a piece of cheese, and two types of bread. The locals put the cheese right in the hot chocolate so it can melt, but it looks a little unruly. Proceed with caution. For something heartier, order Bogotá's signature dish, a chicken and potato soup called ajiaco, or a tamal, served steaming hot and stuffed with chicken and pork.

Stroll Through La Candelaria
After breakfast, wind yourway around the city's charming historic district, La Candelaria. Start in Plaza Bolivar, the pigeon-filled heart of the old town and head towards the Museo Botero. Ogle the beautiful colonial buildings and duck into any church you pass. These are some of the oldest buildings in the city. Amazingly, the Iglesia de San Francisco dates back to 1557. On Sunday morning through the early afternoon, Carrera Séptima closes to cars and becomes a pedestrian walkway. Stroll freely and watch as bikers, performance artists, and fruit sellers take over the streets.

Museo del Oro
Cra. 6 #1588
The pride of Bogotá, and one of the most impressive museums in Latin America. The collection includes more than 55,000 gold objects created by pre-Hispanic cultures. Free tours are offered in English Tuesday through Saturday at 11 a.m. and 4 p.m.

Museo Nacional de Colombia
Carrera 7a. #28-66; +57-13-81-64-70
Set in a former prison designed by an English architect in 1874, the museum's signage is primarily in Spanish, but it's interesting to take a spin if you have extra time. The museum is not free but very inexpensive. The walk from La Candelaria isn't far but it runs along some busy roads. Opt for a taxi instead. 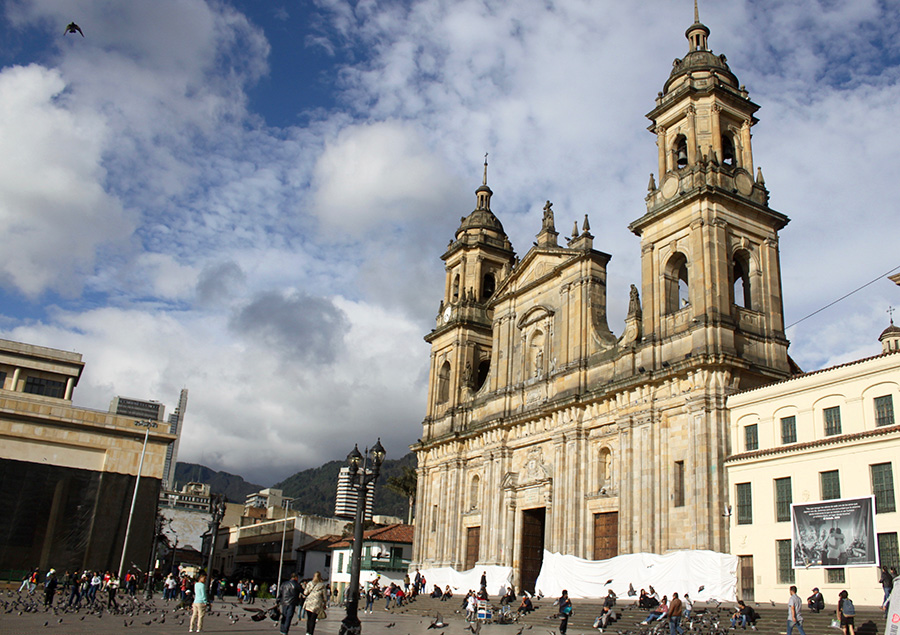 Old Classic
Mount Monserrate rises over 10,000 feet above sea level and overlooks the wild sprawl of Bogotá. It's possible to hike to the top, but the altitude can leave even the fittest huffing and puffing. Instead, allow the cable car or funicular to whisk you to the top in just minutes. While those pressed for time can snap a few photos and head back down, it's worth taking in the view from both sides.

Local Favorite
You could spend hours exploring Plaza de Mercado Paloquemao, one of the largest in the city located a couple miles west of La Candelaria. Wind your way through the rows of stalls selling produce, coffee, flowers, batteries, and live chickens. Colombia produces an incredible array of fruit varieties and it's so much fun to try them all. My favorite is the granadilla, a sweet and crunchy sort of passion fruit, but don't leave without tasting the lulos and the zapotes too. For a real local lunch, the outdoor perimeter of the market is lined with food stalls, restaurants, and bars that get popping before noon.

Nightlife
Many people will tell you that you can't leave Bogotá without hitting Andrés Carne de Res (Calle 3 #11A - 56; +57-31-04-77-37-90). I am one of those people. The 2.75-square-mile restaurant/nightclub/amusement park is in Chia, about an hour-long Uber ride north of the city. Andrés is decorated sort of like a chicer T.G.I. Fridays, with knick-knacks everywhere, bumping music, performers in costume, and multiple dance floors. It's also a great restaurant, serving steak, arepas, empanadas, and more on its 70-page menu. Andrés is difficult to explain, but it's a uniquely Colombian experience that's practically guaranteed to be a good time. Make a reservation for dinner at around 8:30 p.m. on a Friday or Saturday and plan to stay until the wee hours. 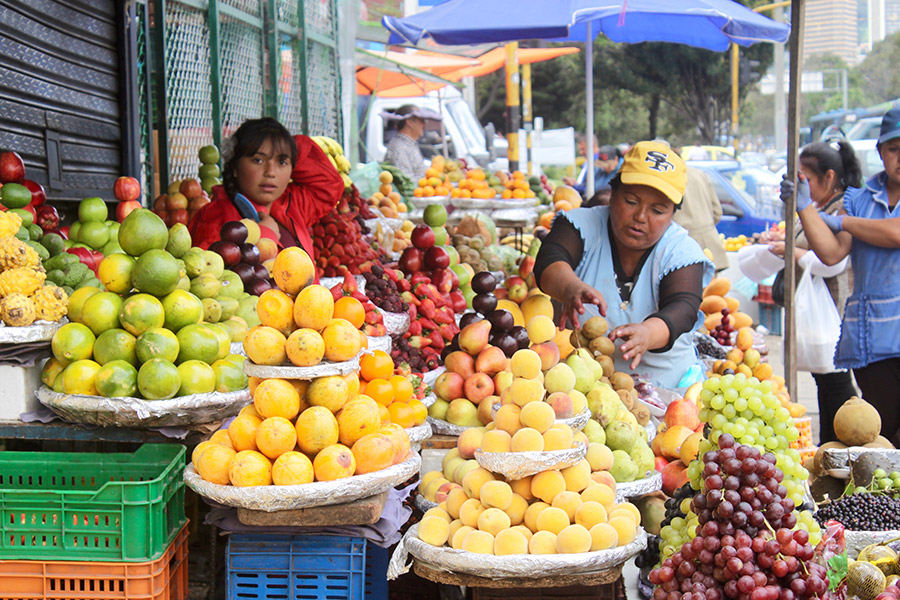 A fruit stand at the Paloquemao Market. Photos by Allison DiLiegro.

Mesa Franca
Cra. 6 #55-09, Chapinero; +57-18-05-17-87
Just opened in 2016, Mesa Franca serves up some serious gastronomy in an incredibly cool space. Its neon-lit bar, leafy wallpaper, and excellent cocktails would be enough to draw a crowd, but the food happens to be some of the best in Bogotá. Pro tip: Start with a cocktail and the buñuelos de yuca and end with the "Dona" for dessert, even if you aren't typically a sweets person.

Las Margaritas
Calle 62 #7-77, Chapinero; +57-12-49-94-68
One of the most famous Colombian foods is the empanada, a deep-fried meat-stuffed pastry often eaten on the go. Las Margaritas has been frying up some of the best in Bogotá since 1902, so it's safe to say they know what they're doing.

Abasto
Cra. 6 #119B-52, Usaquén; +57-12-15-12-86
Abasto has a few shops throughout the city, but the Usaquén location is particularly lovely. The restaurant-cum-farmers market serves delicious local food that's healthy enough to combat at least a couple of those empanadas. Go for lunch on Sunday after hitting the Usaquén market.

El Gato Gris
Cra. 1A #12B-12, La Candelaria; +57-312-585-6421
Bogotá's signature dish is ajiaco, a warming soup that staves off the mountain chill. Ajiaco is made from three kinds of potatoes, chicken, and corn, topped with crema and served with a side of rice and avocado. Many hole-in-the-wall shops in Bogotá cook up the famous soup, but this cozy spot with a rooftop is a nice place to rest your feet while touring in La Candelaria.

Quinua y Amaranto
Calle 11 #2-95, La Candelaria; +57-314-541-0393
For a lighter lunch in La Candelaria, stop by the adorable two-story spot for the set vegetarian menu. It comes with a fresh juice, homemade soup, a veggie entree, and dessert for just over $5.

Leo
Calle 27 B #6-75, Santa Fe; +57-12-86-70-91
Listed as one of "Latin America's 50 Best Restaurants," Leo is the flagship restaurant of Leonor Espinosa, one of Colombia's most celebrated chefs. The upscale menu showcases culinary traditions from across Colombia and features little-known local ingredients. 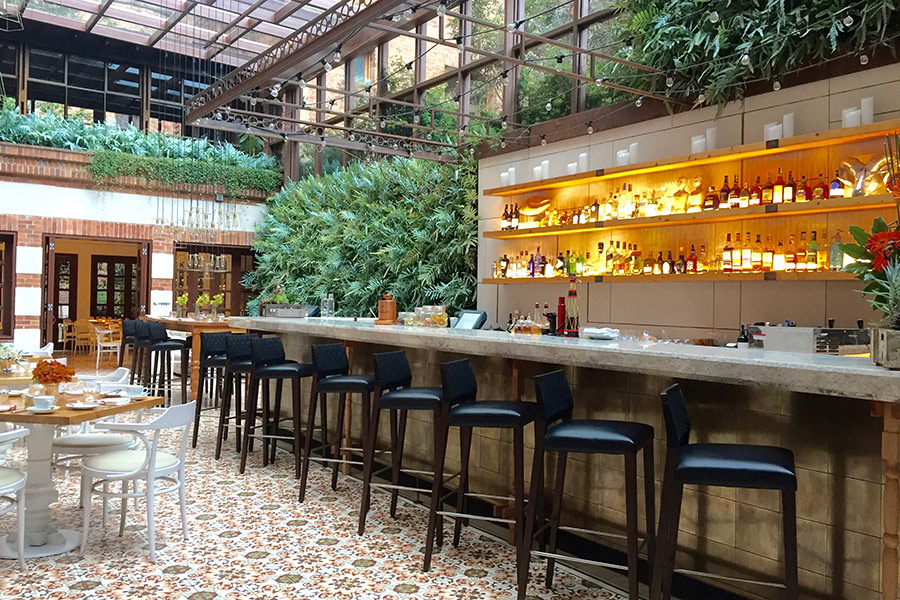 Four Seasons Casa Medina
Avenida Carrera 7 #69A-22, Zona G; +57-13-25-79-00
Set in a former mansion built by architect Santiago Medina Mejia in 1946, the hotel oozes charm, style, and sense of place. The building was declared a monument by the Colombian Ministry of Culture, so the interior structure cannot be altered. As such, each room is different but all are cozy and beautiful, featuring hand-carved doors, sumptuous rugs, local art, and those incredibly plush Four Seasons beds. Located in a business area of the Zona G, Casa Medina is a short ride to some of the best restaurants in the city. The in-house Spanish restaurant, Castanyoles, serves tapas in an absolutely beautiful, leafy courtyard.

B.O.G. Hotel
Carrera 11 #86 - 74, La Cabrera; +57-16-39-99-99
Set just above Zona G in La Cabrera, the most exclusive neighborhood of Bogotá, the B.O.G. is a sleek and sexy design hotel that offers excellent value. The 55 rooms are modern, light-filled and luxurious, with huge windows, comfortable beds, and cool design touches like a cowhide chair. There are a nice spa and a small gym on the ground floor, and a rooftop with a heated pool and lounge chairs for sunny days.

Hotel de la Opera
Calle 10 #5-72, La Candelaria; +57-13-36-20-66
There are surprisingly few quality hotel options in La Candelaria. However, Hotel de la Opera offers a prime location to travelers looking to stay near the top sights in the city. The 42 rooms are set in two historic buildings and while they do feel a bit dated, they are bright, spacious, and charming. There is a great spa with an indoor pool and a Turkish bath.

How to Get There
Direct flights to Bogotá (BOG) are available from many major hubs across the United States and Europe. Avianca flies frequently from Cartagena (CTG) and Medellin (MDE) if you're working on a larger Colombia itinerary.

Getting Around
Uber and taxi are the most convenient ways to navigate the city. But if you grow tired of sitting in traffic, the TransMilenio bus is a crowded but quick way to get around.

When to Go
Weather in Bogotá is always about the same in that it's always unpredictable. There is typically less rain in the winter months, but the city makes no promises. The spectacular summer festival takes place in August, so prices will be higher but there are endless cultural activities on offer.

Local Customs
Keep in mind that a 10% service charge is typically included on a restaurant bill. This is considered an appropriate tip, but you may decide to leave a little extra for spectacular service.

What to Pack
At an elevation of 8,675 feet, Bogotá is one of the world's highest capital cities. Altitude sickness can affect some travelers, so consult with your doctor in advance to ask about safeguards against it. The weather can be hot and sunny one moment and chilly and raining the next, so pack your umbrella and lots of layers. As with most South American cities, it's best to leave your diamonds and gold watch at home.

For Your Bedside Table
To truly understand Colombia, it's essential to read Gabriel García Márquez. The beloved Nobel Prize-winning novelist is considered the father of magical realism, a style that has since swept the world but is distinctly Colombian. One Hundred Years of Solitude is considered his magnum opus.

Forget What You Saw on Narcos. Medellín Has Reinvented Itself
Picture This: Vacationing in Cartagena
Finding the Lorax in Colombia's Cocora Valley