W Mexico City has shed the magenta-lit and blocky modern, mega-boutique image the hotel chain cemented in the mid-aughts with a complete overhaul. The newly masquerade-themed hotel in the tony Polanco neighborhood has 237 guest rooms and public spaces designed by Anurag Nema of NYC-based Nemaworkshop. While the hotel maintains the contemporary, playful touches you'd expect from a W (like oversized mask-shaped swivel chairs in the lobby), clever and thoughtful details in the rooms slyly refer to local culture, like lucha libre wrestling. (And when in the D.F., as everyone calls Mexico City's distrito federal, do not miss a match at Arena Mexico.)

There's no big pool or swim-up bar (if you want that from a Mexico experience, you're in the wrong part of the country), but their Away Spa is undergoing a massive renovation that will be unveiled early 2016. Living Room Bar in the lobby hosts wildly popular W Happenings, which are usually filled with locals out for a chic, good time. The gender-neutral lobby bathroom with gorgeous geometric cement tiles converts to a tequila bar on such occasions. 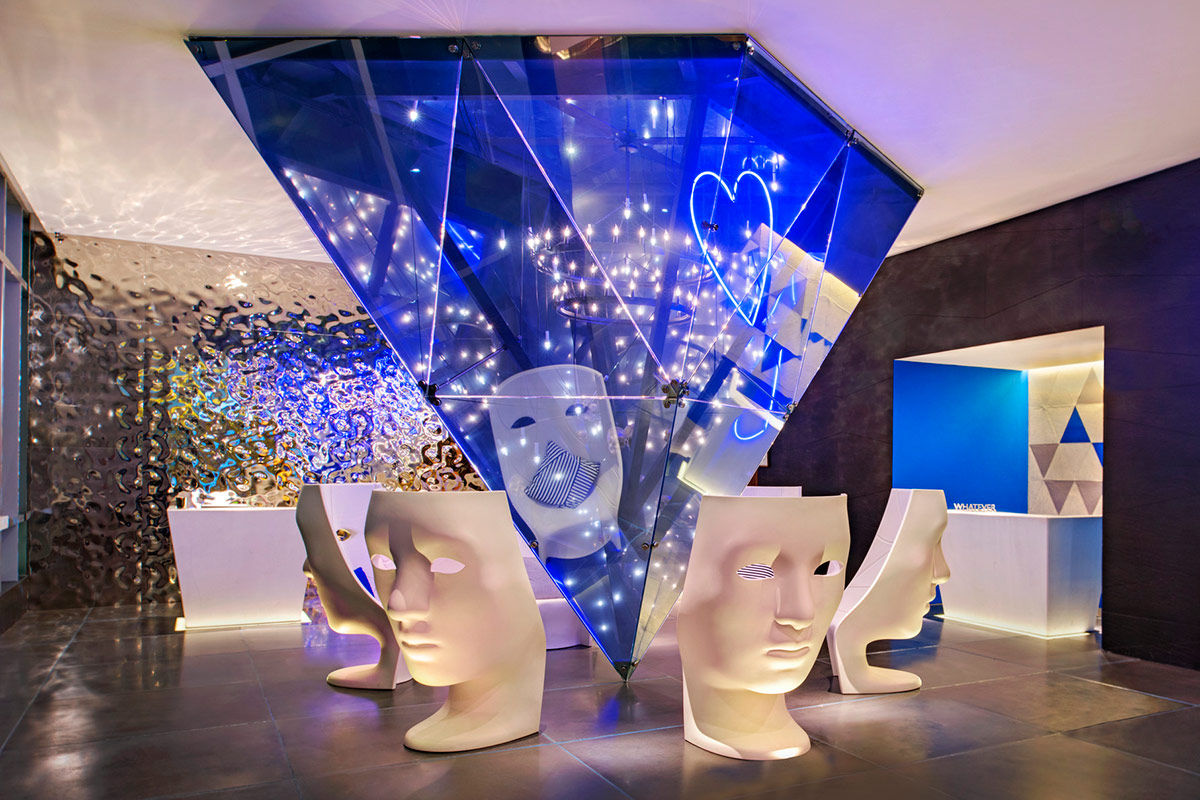 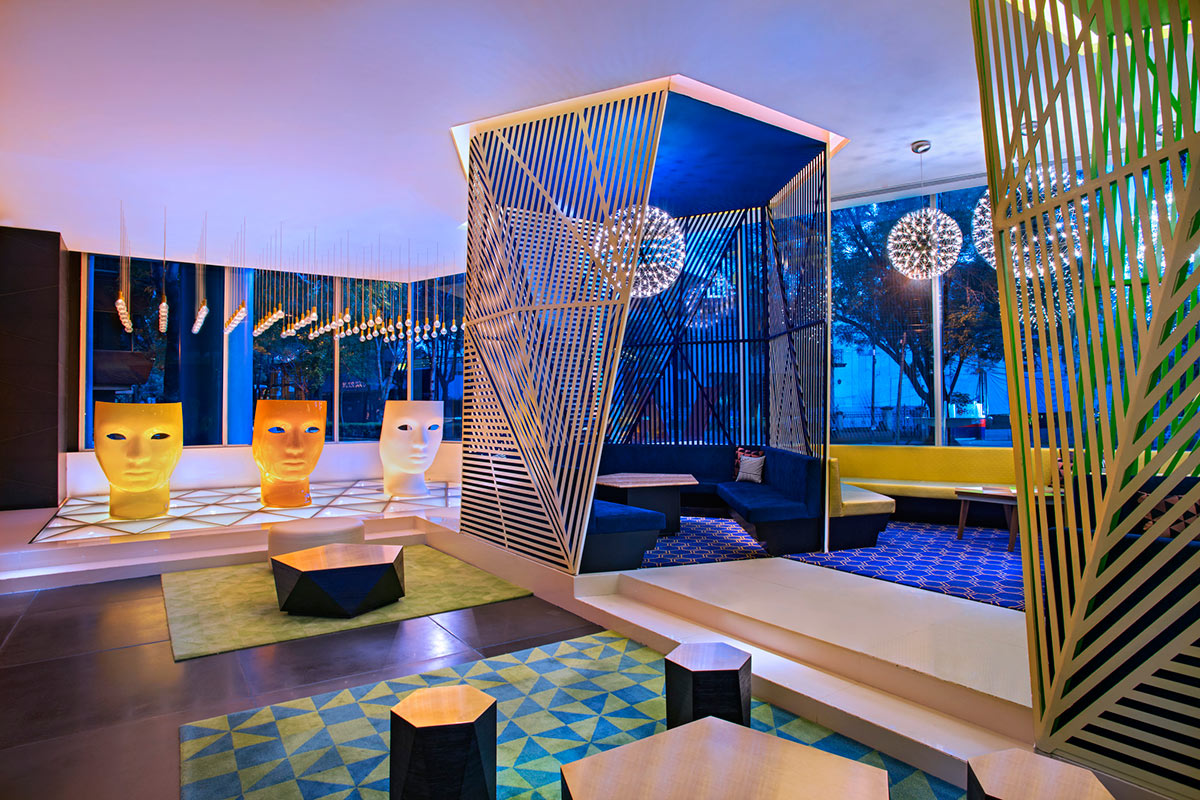 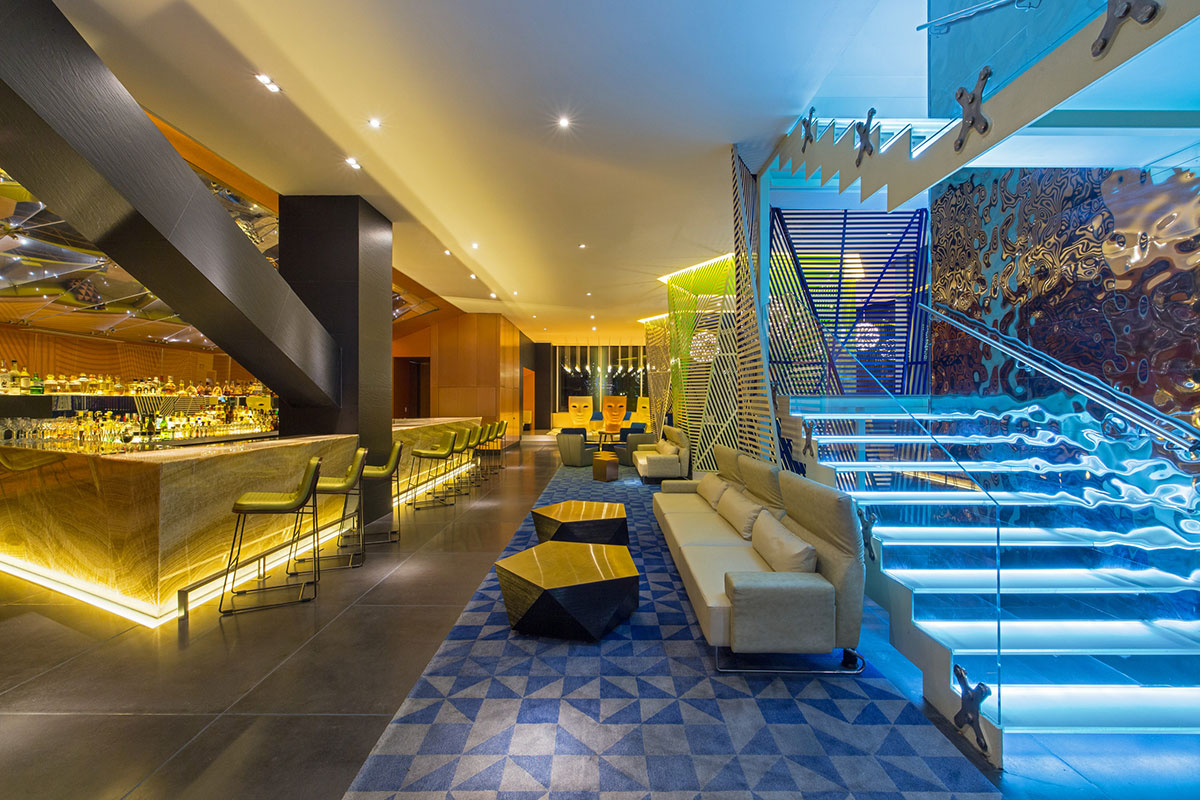 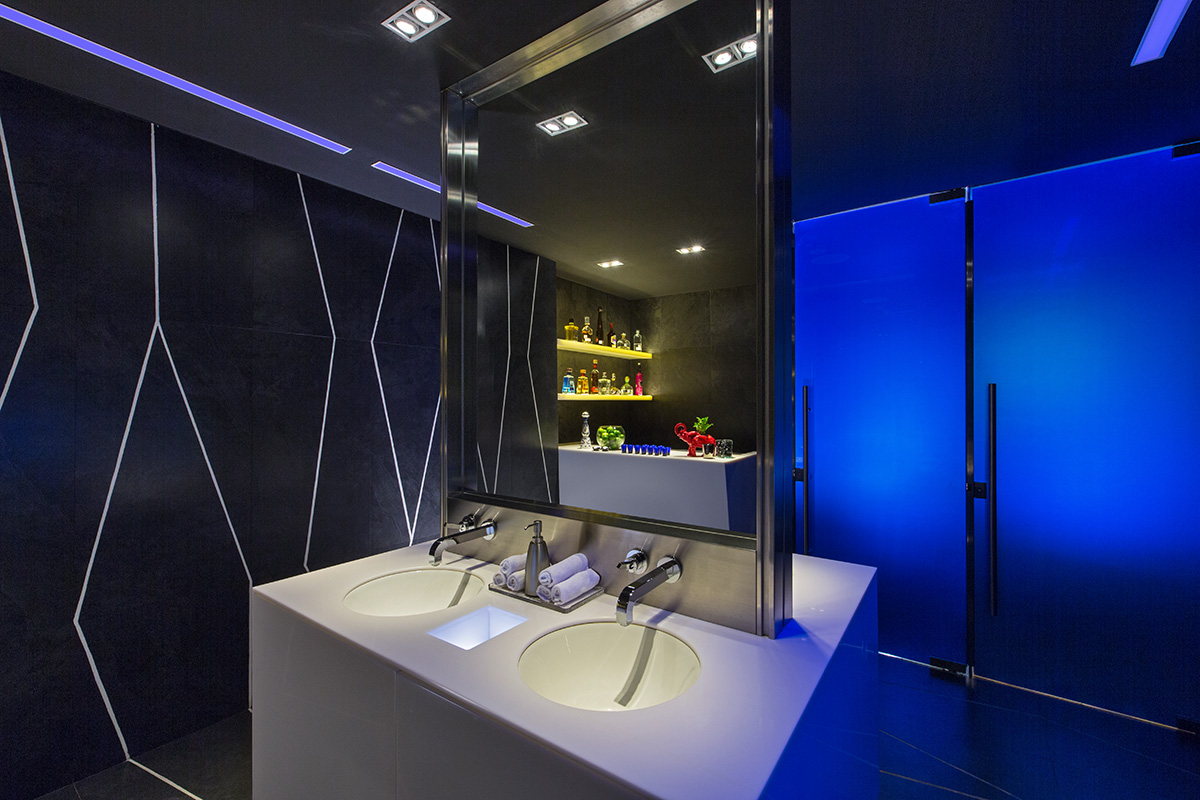 The gender-neutral lobby bathroom. Note the tequila bar in the reflection.

The hotel has a big juicy piece of food-related news: J by José Andrés is first venue that the Spanish-born, DC-based chef, molecular gastronomy wiz, and food activist and his ThinkFoodGroup team have opened outside of the United States and Puerto Rico.

Not everything at J pushes the boundaries of modernist cuisine, however. Breakfast includes a hearty squash blossom omelet, as well as an extensive buffet of fruit, fresh pastries, cheeses, and cured meats. Dinner is a refined but lively experience in a dining room decorated with olive green tufted banquettes and a dramatically backlit tree silhouette. The large outdoor lounge continues the restaurant's intense red/orange/yellow color scheme when dinner winds down. The conversation-starting dishes Andrés is known for are on the menu here, including "liquid" olives and tomato/watermelon cubes.

Andrés and his Mexico City team, led by chef Terri Cutrino, have also hit upon foods with intriguing and delicious Mexican and Spanish post-colonial overlap, such as a reinterpretation of walnut cream sauce and pomegranate seed-topped and stuffed chiles en nogada, wherein they use bright red piquillo peppers instead of the more traditional green poblanos. 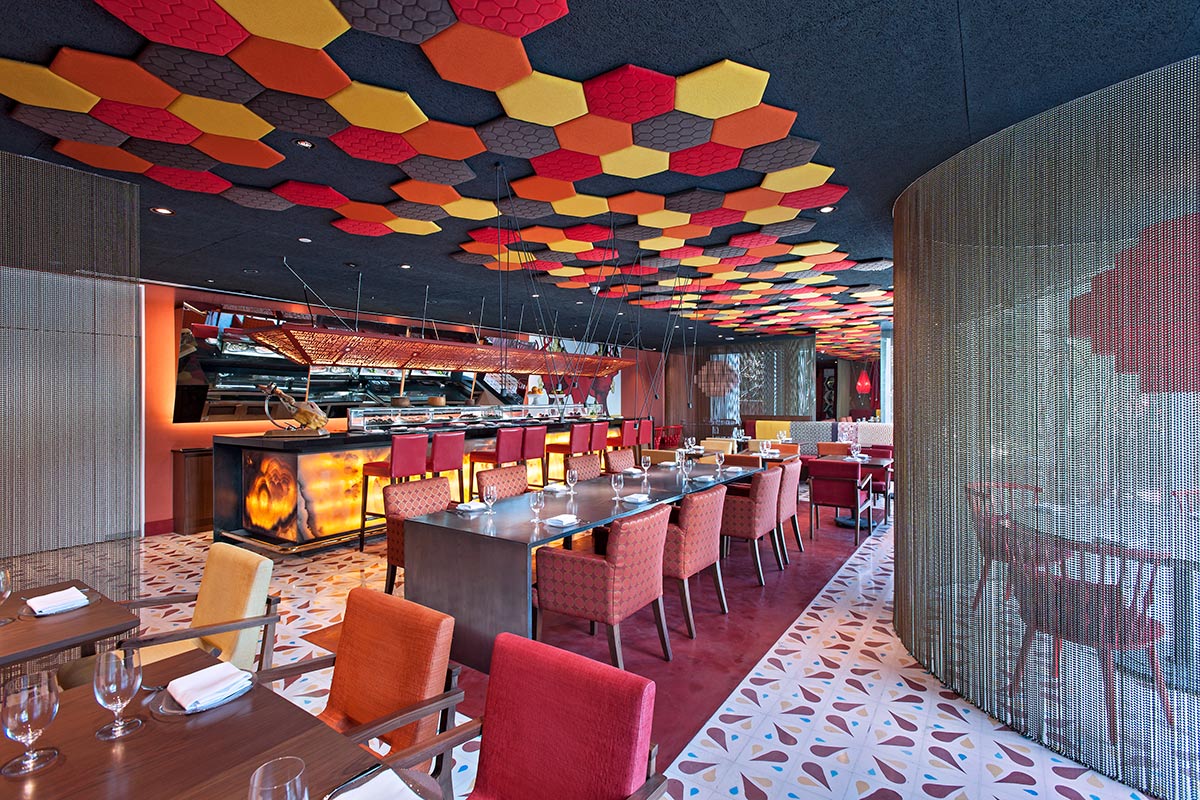 The indoor dining room at J by José Andrés. 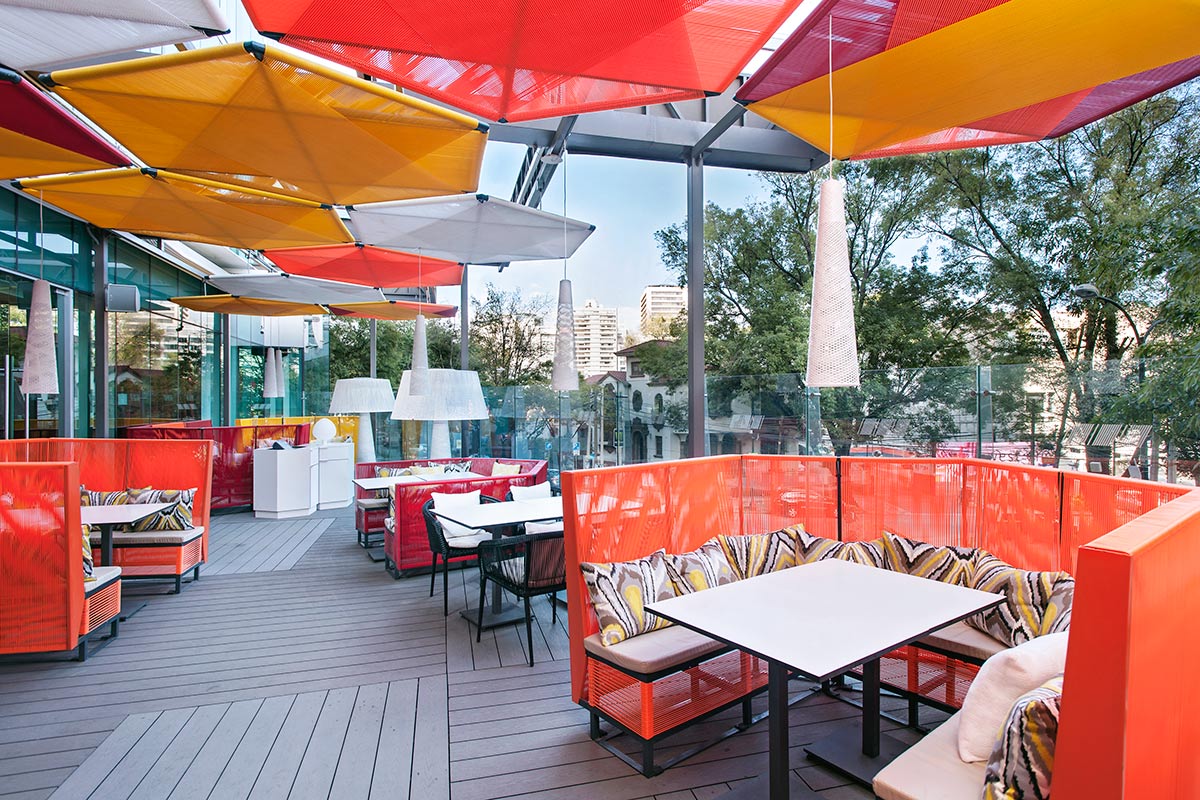 The outdoor terrace at J by José Andrés.

The bright yellow frame painted behind the flat screen and the rooms' shockingly intense blue water closet walls remind you that you're on the home turf of Frida Kahlo and Luis Barragán. Such details root the mod luxury hotel in its setting, never skimping on the creature comforts the international brand promises.

Flick on the lights to see wooden Mexican-made animal toys reflected in the infinity mirror mounted above the bed. Wall-sized photo murals and silk-screened pillows by Ivan Aguirre depict Mexican model Cristina Piccone dressed in various cultural tropes like conquistadora, cinematic diva, and Mexican revolutionary. Another decor spoiler: Stand back from the bed coverlet, and you'll see a lucha mask motif hidden in the pattern. Built-in desks are comfortable as temporary work stations, and guest rooms have up-to-date plugs and outlets galore. Reliable WiFi is included, but you'll want roaming on your phone for Uber when you're off campus. It makes getting around massive Mexico City much more convenient.

The W's tower means most rooms have expansive views of this seemingly endlessly and sprawling city. Corner rooms and suites on the upper floors have the best POV, facing Parque Lincoln to the north and massive Bosque de Chapultepec, which is a short walk south. The bathrooms are best positioned to take advantage of the city views — presumably the glass is one-way — since the bed and seating areas are set away from the windows.

Kids, although whimsical elements like the lime green glowing platform bed might appeal to many of the tween-and-under set. Most guest rooms don't have bathtubs. White polished floors aren't exactly cozy, so the provided slippers are a needed amenity. 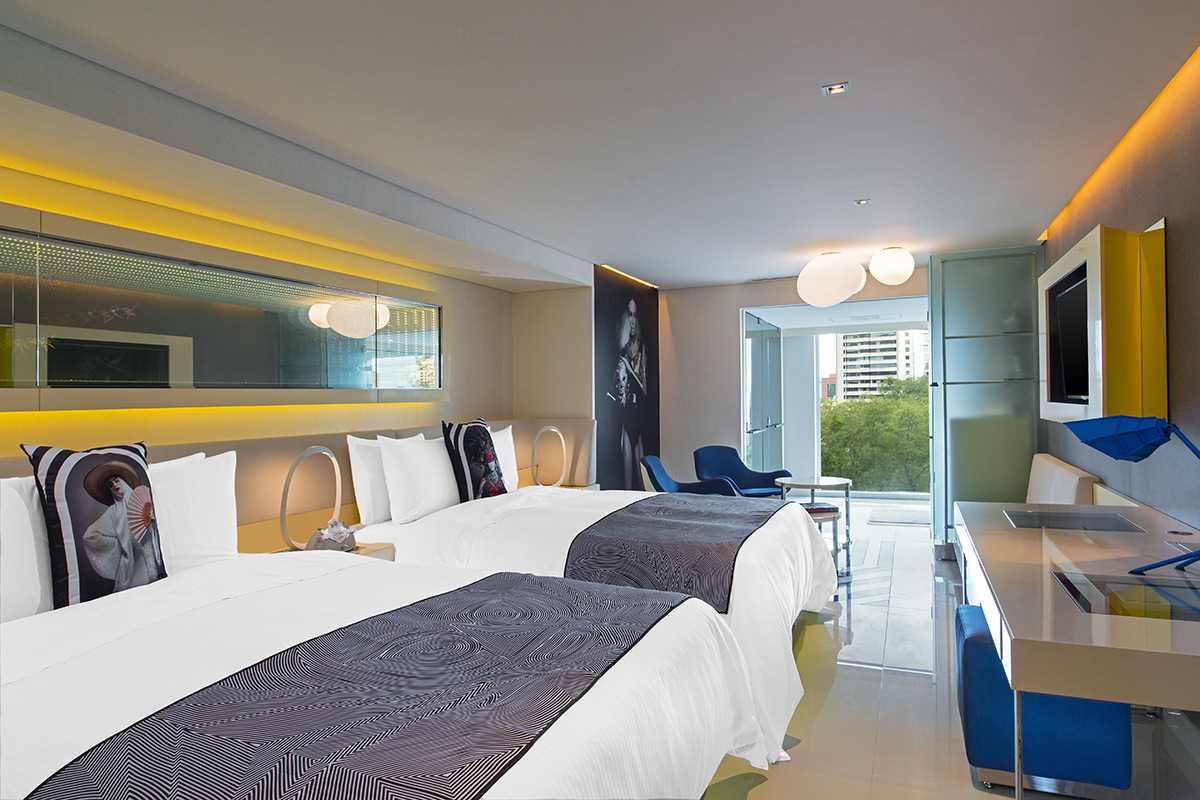 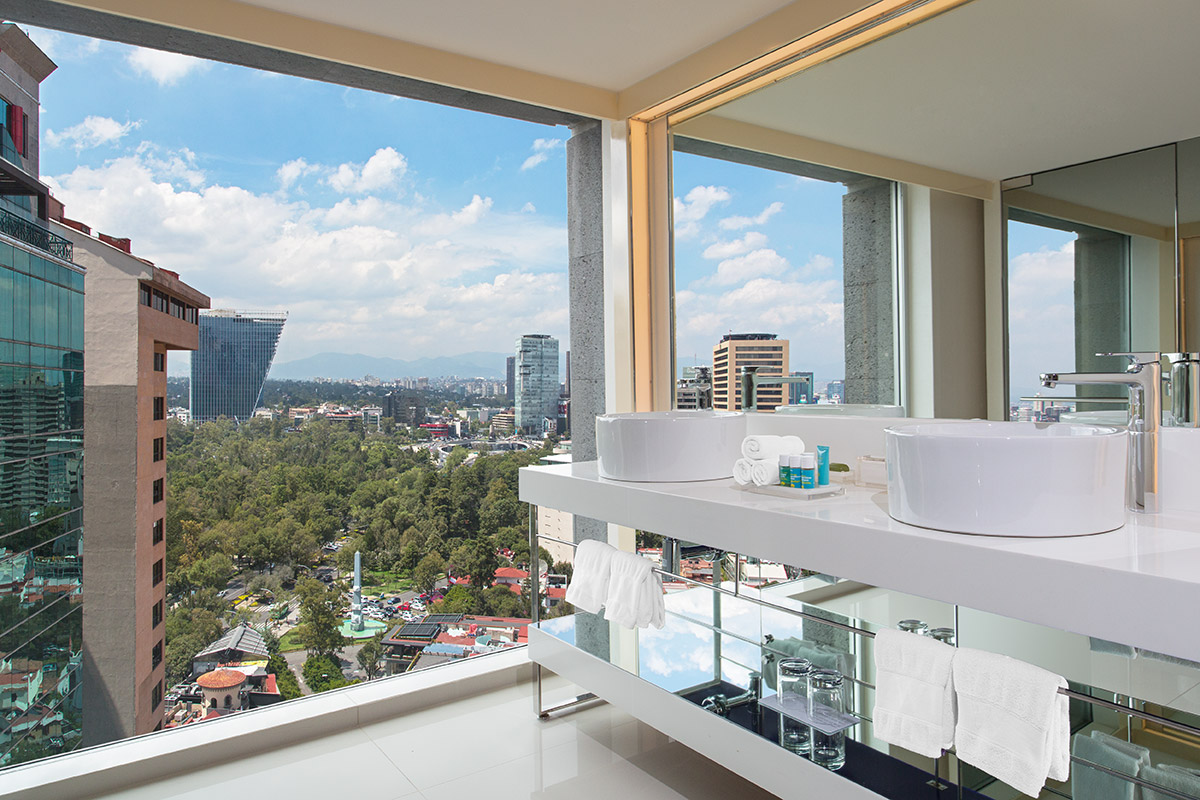 Polanco is arguably the toniest of all the Mexico City neighborhoods (or colonias), home to an international mix of corporations, NGOs, and embassies. Super edgy architecture is mixed in with early 20th-century buildings, Art Deco gems, a little Latin American funk, and many forgettably generic boxy high-rises. Families congregate at genteel Parque Lincoln on Sundays for casual strolls.

I was lucky to be there during the Design Week Mexico, which featured thoughtful installations throughout the park and a cluster of shipping containers temporarily transformed into design showrooms. The fact that Polanco's street names honor historically significant writers, thinkers, and politicians is in its own way instantly enchanting.

If you have limited time in which to squeeze in a dose of culture, the architecturally stunning and important Museo Nacional de Antropología is a fifteen-minute walk from the hotel. You could spend hours here gazing at pre-conquest-era treasures and Mexican modernist surroundings. Also nearby: Museo Tamayo on the eastern edge of the park and Parisian-inspired Paseo de la Reforma, which on the weekends is full of joggers and groups at leisure.

Chances are you haven't come to DF to drop wads of cash at Gucci, Hermes, and Louis Vuitton on Avenida Presidente Masaryk's luxury row, but the local shops and galleries are fun to browse. Common People transformed an enchanting early 20th-century mansion into a collection of boutiques with familiar labels (LAMB, Opening Ceremony). The old world-vibe in Café Budapest on the second floor is absolutely worth a visit. 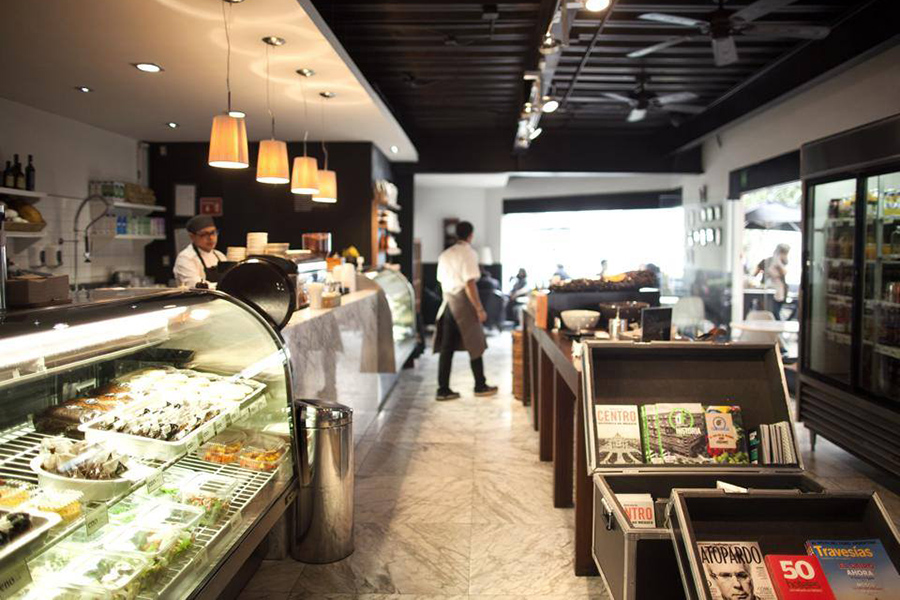 The grab-and-go situation at eno. Photo courtesy of eno.

World-renowned chef Enrique Olvera's Pujol help put DF on the map of high-end eating, while his casual cafe and bakery, eno, is a perfect place to grab a quick bite for breakfast or lunch. Even in the morning you'll spot folks popping into Santa Clara ice cream shop for a dairy treat.

Mexico City gets a bum rap for pollution and violence. As is the case anywhere and everywhere, use common sense and take precautions, but don't let irrational fear get in the way of enjoying one of the world's great cities.