Zachary Golper, chef and owner of Brooklyn's beloved bakery Bien Cuit, and food writer Peter Kaminsky scoured the five boroughs of New York City in search of inspiration for their cookbook Bien Cuit: The Art of Bread. Here, they share a list of old-world bakeries and ethnic restaurants that inspired their quest to help home cooks recreate the city's most iconic breads.

NEW YORK CITY – They say the journey is as important as the goal, and that proved to be true in searching out inspiration for our new cookbook, Bien Cuit: The Art of Bread. Our initial phase of research consisted of visits to many out-of-the-way, ethnic outposts that continue to make New York City a nirvana for food lovers. We didn't always find what we were looking for, but we always found something worth tasting. We are big supporters of drive-by, walk-by, bike-by dining discoveries. It's part of the magic of this city. Here are the old-fashioned bakeries and modern restaurants that inspired our first collection of delicious, artisanal bread recipes.

P.S. We never did find the perfect bagel, but after experimenting with 24 recipes, we think we hit it. Hope you agree.

Villabate Alba
7001 18th Ave., Bensonhurst; +1-718-331-8430
Still blissfully free of gentrification, Bensonhurst is home to possibly the most beautiful bakery in all of New York City, largely thanks to the colorful and bountiful array of pastries, cakes, and breads. We've never had a bad anything here. The marzipan pastries are art-museum quality.

Mazzola Bakery
192 Union St., Carroll Gardens; +1-718-643-1719
They say you can tell that a diner is good if truck drivers congregate there. At this Carroll Gardens landmark, substitute police cars and tricked-out strollers. People come for the lard bread, studded with bits of hard salami that are great for road trips with the kids. This is stick-to-your-ribs stuff that goes down as quickly as a bag of potato chips. Get a couple of equally formidable sfogliatelle pastries with ricotta and orange peel in a super flaky seashell shape.

Jubilat Provisions
608 5th Ave., Park Slope;  +1-718-768-9676
One of the last outposts of a once rock-solid Polish enclave on the border of Sunset Park and Park Slope is this hall-of-fame of kielbasa and cold cuts. They also sell out-of-the-ordinary pickled vegetables, like pickled parsley root, which really completes a sandwich. Their Lithuanian rye inspired an unexpected but rewarding bread quest that resulted in our Lithuanian table bread. (Here's the recipe for it.) 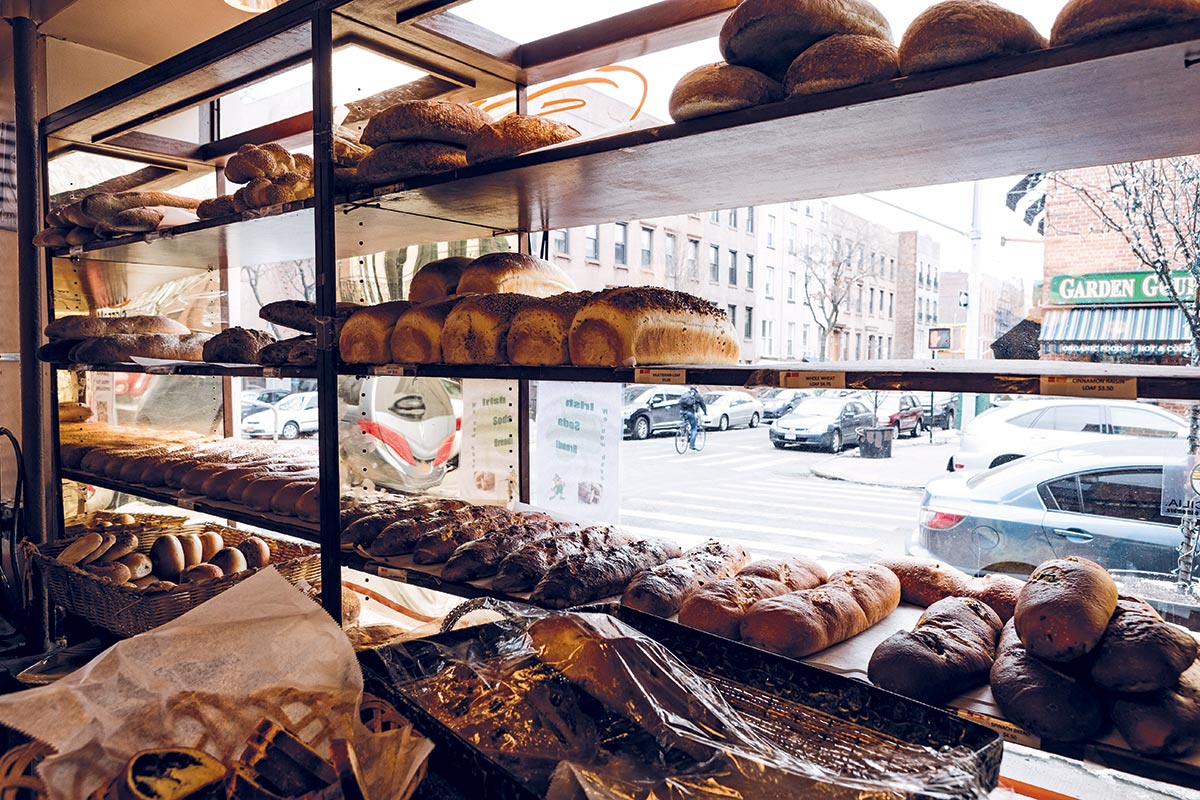 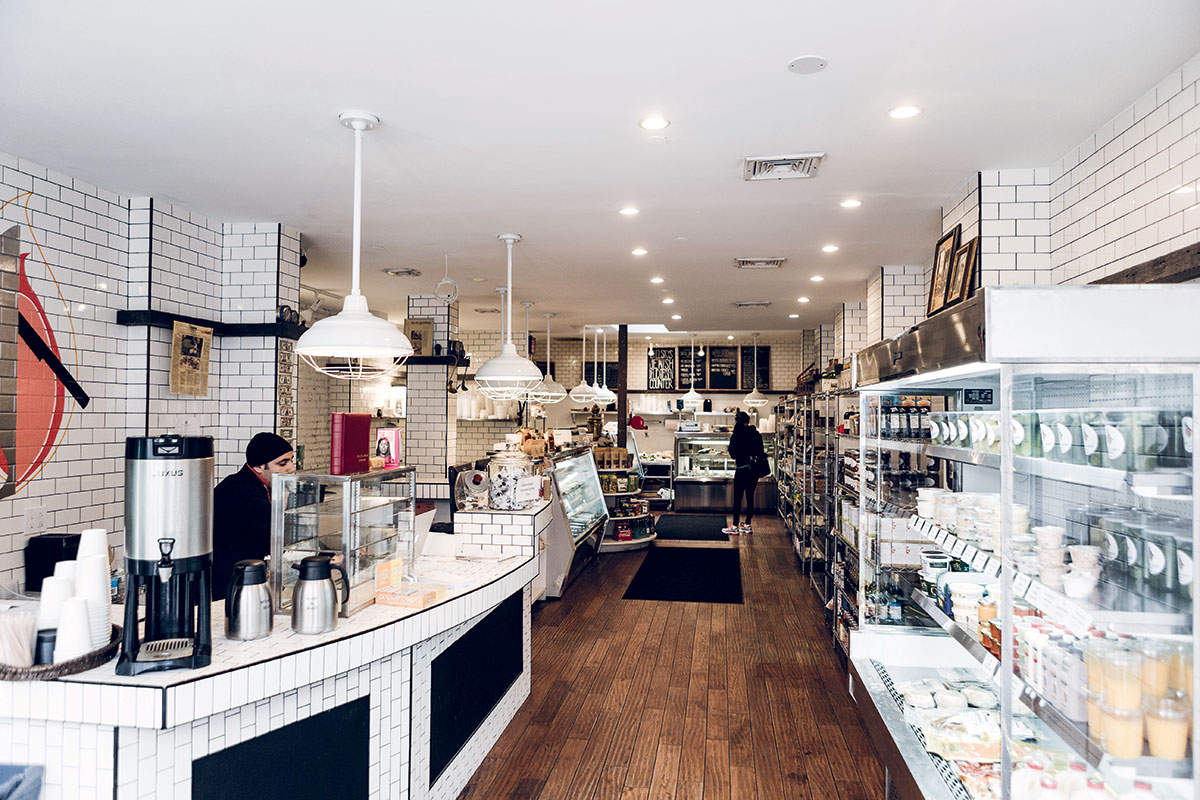 Shelsky's of Brooklyn141 Court St., Cobble Hill; +1-718-855-8817
Okay, we admit it, we are neighborhood guys, but when your neighborhood (Cobble Hill) happens to be ground zero for the Brooklyn artisanal revolution, it ain't no crime. Peter Shelsky, formerly the chef at Neue Galerie's ultra fancy Cafe Sabarsky, has dedicated his considerable gastronomic talents to breathing life back into the smoked fish, rugelach, herring, and pastrami tradition of yesteryear delis and that particular New York institution, the appetizing store. Pick up a loaf of seeded rye. It's pretty real.

Gourmanoff
1029 Brighton Beach Ave., Brighton Beach; +1-718-517-2297
If Whole Foods moved to Moscow and offered every sausage, smoked fish, dark bread, chocolate, and pickle and had a prepared food department that represented every Russian region from Petersburg to Novosibirsk, this would be it. They also have beer on tap! It's the most exciting addition to Brooklyn's Little Odessa since glasnost. The Borodino bread (named after the battle where Napoleon met his Russian Waterloo) can stand up to the most garlicky sausage or pungent herring. There are bulk, dried mushrooms too. This store had us at hello, or, as they would put it, zdravstvuyte.

Di Fara's Pizza
1424 Avenue J, Midwood; +1-718-258-1367
People often say "I'm gonna take you to the best pizza place in New York." No one ever offers number two, which ought to be pretty good, but many of us agree there's none better than Di Fara's crisp charred crust, mozzarella, homemade marinara, crumbled parmigiana, and fresh basil. New York gourmets, neighborhood folks, and Lonely Planet-toting tourists settle in for a long wait, watching wondrous Dom DeMarco unhurriedly making pie while listening to opera on the staticky AM radio.

G. Esposito and Sons Jersey Pork Store
357 Court St., Carroll Gardens; +1-718-875-6863
One of us (Peter) has been shopping here since the current father was a son. The larger-than-life pig statue in front gives those who don't read a hint to what's inside: a lot of pork. Prosciutto, salumi, fresh pork chops, and insanely good braciole (stew it a long time in marinara). They also sell fresh pastas, San Marzano tomatoes, parmigiana, and mozzarella. We visited on our search for the secret to lard bread and got pointed in the right direction: It's the meat. 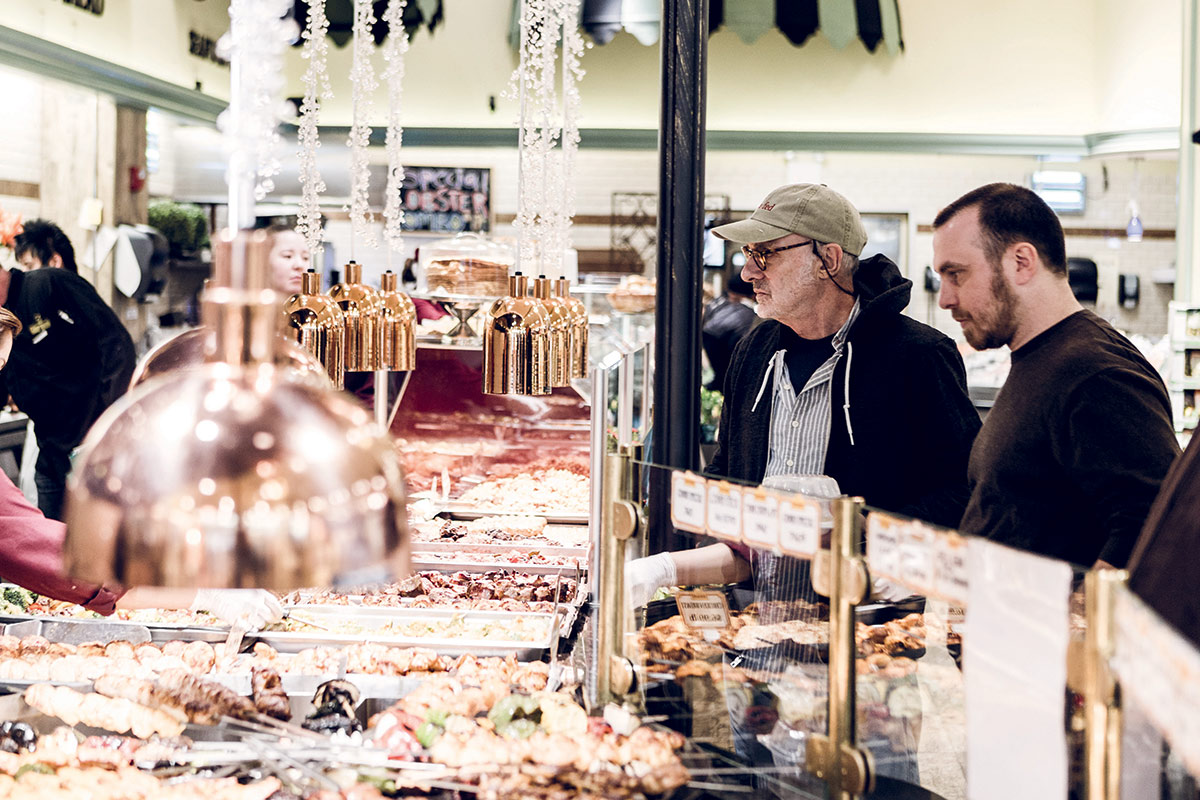 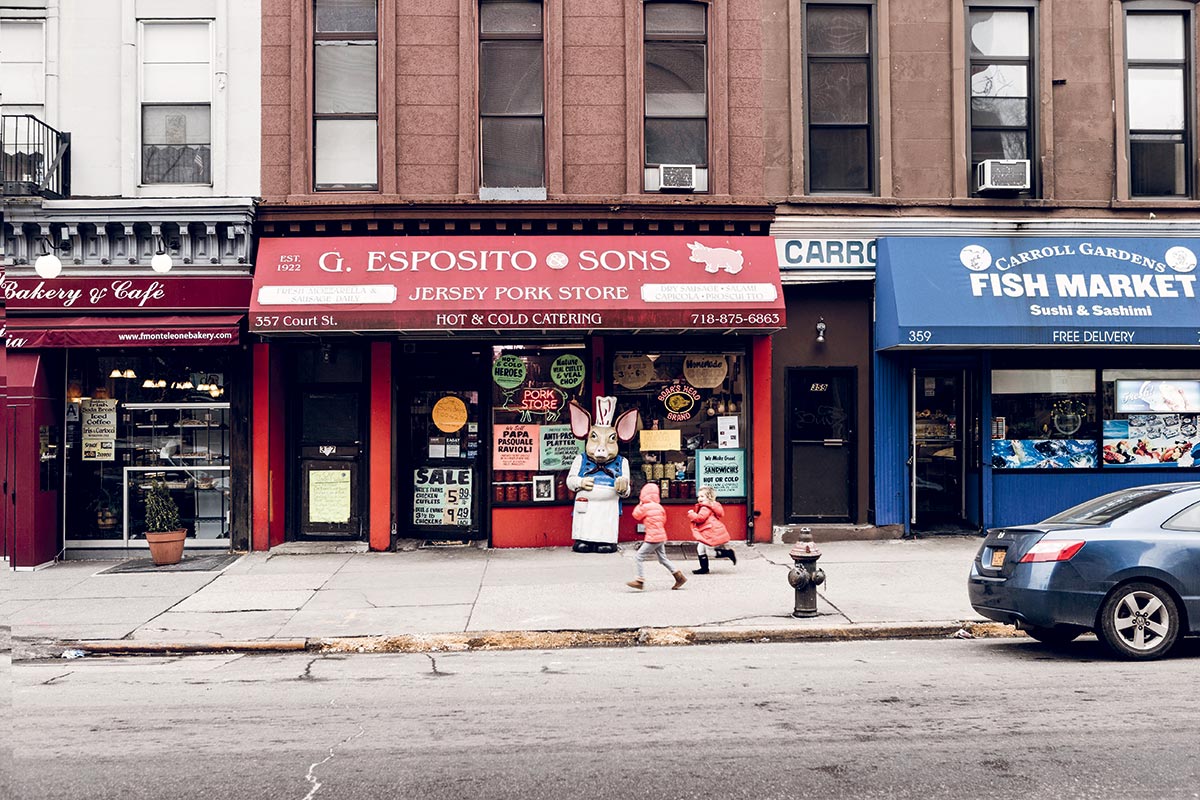 Freds at Barneys New York
660 Madison Ave.; +1-212-833-2200
Everyone knows that New York's Lower East Side is where you go for bagels, pastrami, and other old-world fare. But a luxury department store on the tony Upper East Side? Yep. Chef Mark Strausman creates the best bagel we tried. You can order a basket of them with wonderful butter for not a lot of money or dig down a little deeper for really good lox. The Jewish Boy From Queens sandwich with fresh turkey, coleslaw, and Russian dressing on rye resurrects an often neglected deli classic. (ED note: NYC icon Barneys has closed. R.I.P.)

Russ & Daughters Cafe
127 Orchard St.; +1-212-475-4881
Manhattan's go-to lox-a-teria is located in the heart of New York City's classic Lower East Side. (If you don't believe it, check out neighboring Yonah Shimmel Knish restaurant at 137 E. Houston St. near the Russ & Daughters retail store.) Now two latter-generation Russ family members have opened a sleek — but not off-puttingly chic — restaurant that serves old favorites. They have the best commercial Jewish rye we tried (apart from our own). The food is as good as any of the old-timey places in their prime, but the waiters are much nicer to look at and way less gruff.