Rene Redzepi of Copenhagen-based Noma, uncontestedly one of the world's best restaurants, upped the culinary ante when he moved his entire operation to Tokyo for six weeks in the beginning of 2015. Thanks to an invitation from their airline partner ANA, Jeralyn Gerba slid into a seat at lunch just before the pop-up closed for good. Here's the debrief.

TOKYO –  "So, how was Tokyo?" friends ask me, knowing It has been my holy grail destination for a decade. I suppose I can't really answer that, as I basically flew to Japan for lunch. On the other hand, my epic midday meal was like a thousand-year culture and history lesson served in a few dozen bites.

Technically speaking, I went for a two-day culinary tour in Tokyo to learn about a collaboration between Japan's All Nippon Airways and Scandinavian restaurant sensation Noma, which hosted a six-week pop-up in the Japanese capital. When ANA heard about the Noma experiment, they extended their Japanese hospitality, flying a crew of chefs over the course of the year — from Okinawa and Ishigaki Island to Fukuoka and Osaka — to research techniques and source ingredients.

After traversing the country, temporarily shutting their Copenhagen location, and managing the logistical insanity that includes moving a staff of 70 from Denmark to Japan, the Noma staff checked into the Mandarin Oriental Tokyo and went about transforming the restaurant into Noma Japan. Rice paper was hung from the walls, tables and chairs were crafted by local woodworkers, and the chef's table was relocated to a sunny spot with floor-to-ceiling windows. Ceramic plates, handmade utensils, and earthy tea pots were made by hand in Japan exclusively for the occasion. The kitchen experimented with flavors, foraged esoteric ingredients, and opened the reservation lines. The mad dash for seats began and ended in six weeks, leaving 60,000 people on the waiting list. 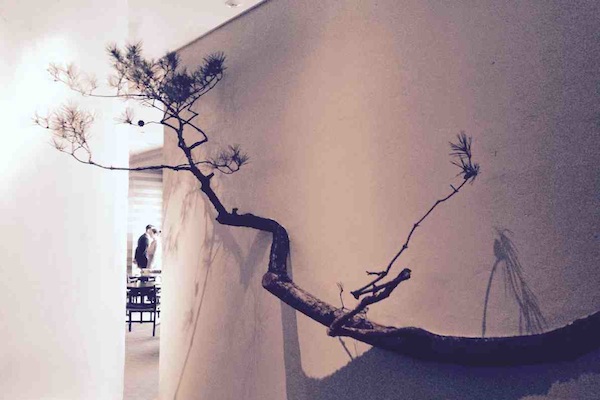 The entrance to Noma Japan. Photo by Jeralyn Gerba.

I flew into Tokyo at the tail end of the run. Even more than the food (which I was really, really excited to eat), I was psyched to hear the Noma philosophy straight from the horse's mouth. How does a restaurant become the best in the world? How does such an outlandishly expensive operation create enough buzz to maintain the spotlight? You'd expect some flash (hello, 16-course tasting menu) and a few gimmicks (serving "technically dead" crustaceans covered in ants), but you might underestimate, as I did, the degree to which each and every item on the plate (not to mention the plate itself) has meaning, intention, and purpose. There's an answer for everything, including moving to Japan. These guys are not messing around.

When I interviewed Redzepi after the meal, he explained why he was intent on stationing in Tokyo. "When it comes to eating, there is no cyncism in Japan ... There's a genuine respect for the products that we would normally hear about and call bullshit on. But in Japan, it's all true." It's all heartfelt.

For their short-lived experiment, Redzepi ws interested in applying Noma's foraging philosophy to a new landscape and cultural context. As a guest at the lunch table, I made my own meaning from my meal.

The meal began with a tiny bowl of a white strawberries and yuzu. Williams told us about a trip he and chef Redzepi took to the countryside — to meet a farmer known for cultivating the best red strawberries in the country and to make a strange request. But the farmer was not interested in selling them the under-ripe, non-colored fruit they wanted. Why would he, when he spent the last 40 years of his life perfecting the best red variety? But it was precisely the route to perfection that they wanted to capture. The meeting of passionate men lasted seven hours and included a bowl of miso soup. In the end, they were able to showcase the farmer's prized fruit in the beautiful but slightly unripe stage.

Then things got serious with the hands-down, most talked-about dish at Noma Japan: bontanebi with bits of wood ants. This one had been circulating on Instagram, so I knew what to expect, but still. The shrimp were so freshly killed that some of the nerve endings had yet to get the message. Mine was twitching ever so slightly. The shrimp on the plate next to mine actually jumped onto the floor. As you could imagine, there was a little shrieking. Why, some might ask, would this kind of dish be served? For one thing, freshness is a delicacy. For another, the dish challenges the (mostly Western) notions of what constitutes food. For the record, the ants had a citrusy taste; Williams explained that these particular ants give off a pheromone that we interpret as a lemony flavanoid.

A medley of citrus (did you know there's such a thing as "designer fruit" in Japan?) with pine salt and kelp-sesame oil. Looks were decieving. It had a real peppery kick.

A beautiful sourdough crisp piled high with bright pink flecks of rich monkfish liver. The dish was so cold, the entire thing melted like butter when I bit into it.

Many of the plates that followed nodded to Japanese kaiseki tradition (small-plate haute cuisine). Chef Redzepi had no interest messing with thousands of years of Japanese expertise making udon. As an homage to the fine craft, they presented a plate of noodles made of cuttlefish, served with a bowl of rose petal dashi broth for dipping.

A major crowd pleaser: a Danish doughnut stuffed with bitter greens and doused with a little fermented grasshopper. It was delicious.

A slice of kombu tart smothered in parsely paste and topped with uni from Hokkaido. It was fresh, buttery, and sea salty all at once.

Wow. So this is tofu. What the hell have I been eating my whole life? A truly incredible homage, this one creamy and flavorful with a crunchy walnut topping for texture. A bowl of this, I am sure, can cure whatever ails you.

Scallop, Dried for Two Days with Beech Nuts and Kelp

What I loved about this dish was the texture. The scallop in the bowl looked almost crunchy, but, upon striking spoon to scallop, it shrunk and evaporated. The beech nuts and kelp oil provided extra nuttiness and a toothsome finish.

Glory, glory! What a dish. Thin slices of cooked pumpkin, salted cherry blossoms, a light barley cream. If springtime in Kyoto had its own flavor profile, this would be it.

If you're tempted to make your own version at home, here's the recipe.

Roasted black garlic, pulverized into origami submission, dotted with a rose-maitake oil. Basically: a savory fruit leather for grown-ups. I could snack on these all day long.

Roots and Starches with Ginger

Nice earthy things pulled from the ground. But check this out: that golden yolk in the center? Cured in a beef and peanut broth.

Duck aged for three weeks had a roasted barley glaze and came with an out-of-this-world berry compote. The duck was served family-style and was pre-sliced, so you just had to dig in with chopsticks. Once everyone had their fill, servers took the remains back to the kitchen and fried the little fatty bits, which they brought back for further snacking. See all those pretty green liquids in wine glasses? My juice pairing with lunch.

Yeast and Turnip Cooked in Shitake

We had a version of this cooked turnip dish at a very traditional kaiseki dinner the night before, and it was really interesting to have that context before diving into this very smooth and hearty bowl of veggie goodness.

As is custom in Japanese haute cuisine, rice was served at the end of the meal. But it appeared at the table as sweet rice paper and sake leaves.

Hot skillets of molten sweet potato arrived next. They simmered in sugar for fourteen hours, and the flavor was super concentrated. A lovely and tart Japanese kiwi sauce cut the sweetness of the tuber.

The final course: a nod to the moss-covered forests of Japan. Mushrooms were fermented, enrobed with chocolate, and flecked with salt. A little like Scandinavian licorice, the "candies" were earthy and incredibly addictive (we fought over the last one). I chewed on the wild sprigs of cinnamon at the very end of the meal.

Lars Williams, head of development at Noma in Copenhagen, introduced every dish as it was served — sharing anecdotes, explaining process, and giving context. He was pretty awesome.