Colombia is having a moment. Between talk of Netflix's Narcos and Steve Harvey's unfortunate blunder at the Miss Universe pageant, hardly a day goes by without the Latin American country being referenced. Drug trafficking and beautiful women aside, there is so much more to naturally rich Colombia than pop culture may lead you to believe, including Medellín, a city positioning itself as the next art and design capital of South America.

I was told that the people of Medellín and the Antioquia Province are "very proud... the Texas of Colombia, they would secede if they could." Medellín, once one of the most violent places in the world, is now safer than many American cities. Urban development and a burgeoning creative class are leading the charge to make it a world-class destination.

Nestled in the Aburrá Valley of the Andes on glute-perfecting hills, I often found myself wondering if I had stumbled onto the San Francisco of South America. Nicknamed City of the Eternal Spring for its temperate climate, it made me want to stay put for a while. 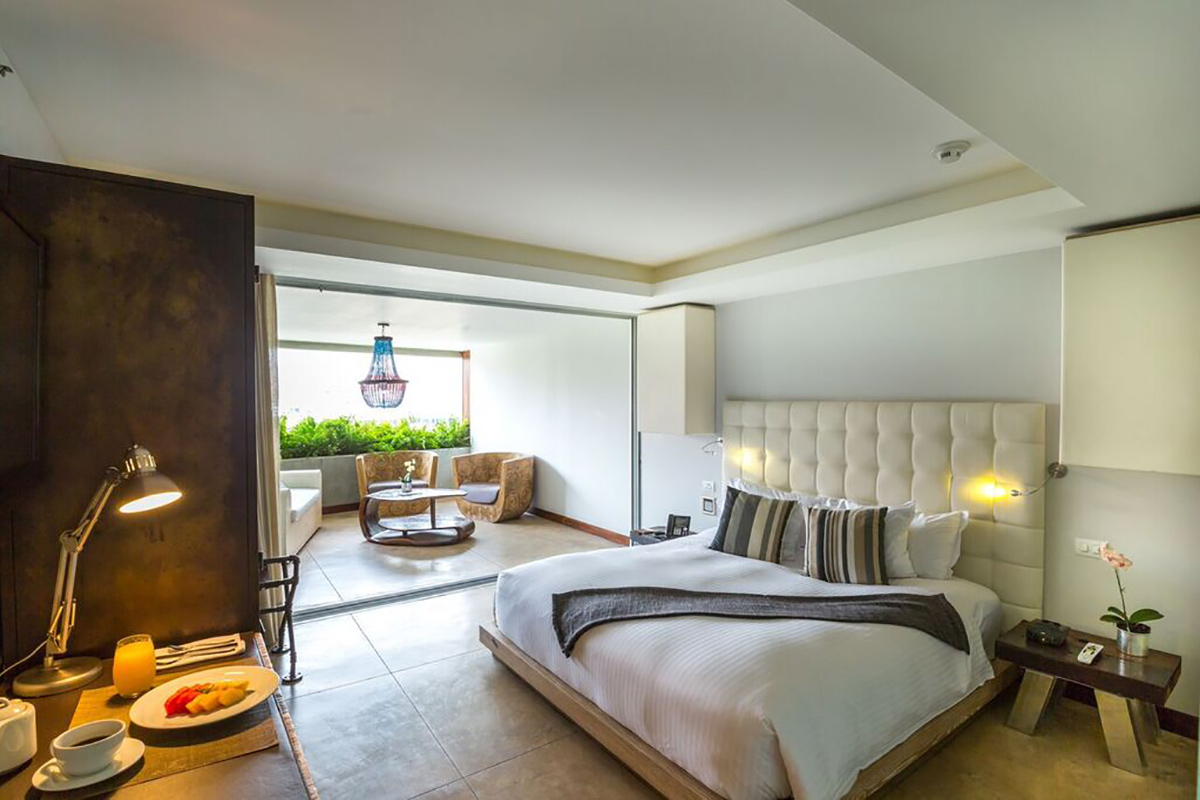 A room at The Charlee.

The Charlee is the epicenter of the Medellín's hospitality industry. Opened in 2008, it has the boutique hotel market cornered with everything from five-star service (I lost an emerald in my laundry and they found it!) to high-grade design with a strong focus on art. Murals from Latin American artists decorate the staircases and there are rotating art and photography exhibitions in the hotel's lobby and studio area. Much of the art is for sale. If you're a workout buff, the gym is the place to be seen. It is Colombia after all. With sweeping views of the city as it sprawls into the hills, you almost don't want to leave the hotel, but there are even more reasons to love Medellín.

The Charlee is located off Parque Lleras in the heart of Zona Rosa in the upscale El Poblado neighborhood. Local boutiques, design stores, restaurants, and nightlife fill the area and make it the ideal location for a hotel stay or an Airbnb. There are even a few hostels in the area. Always lively, yet busy with locals, this is one of the safest and most convenient places to stay.

Want more intel on the world's coolest cities? Sign up for our newsletter. 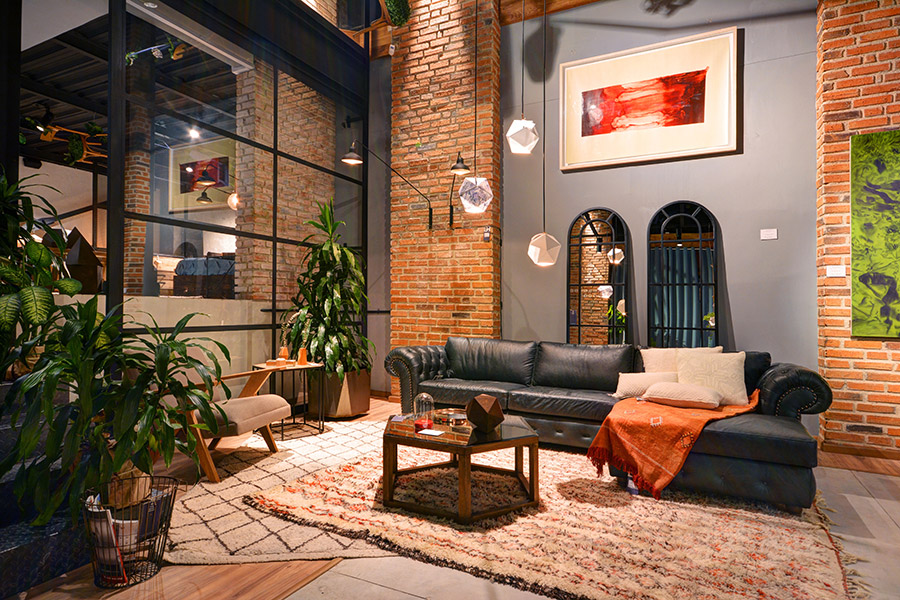 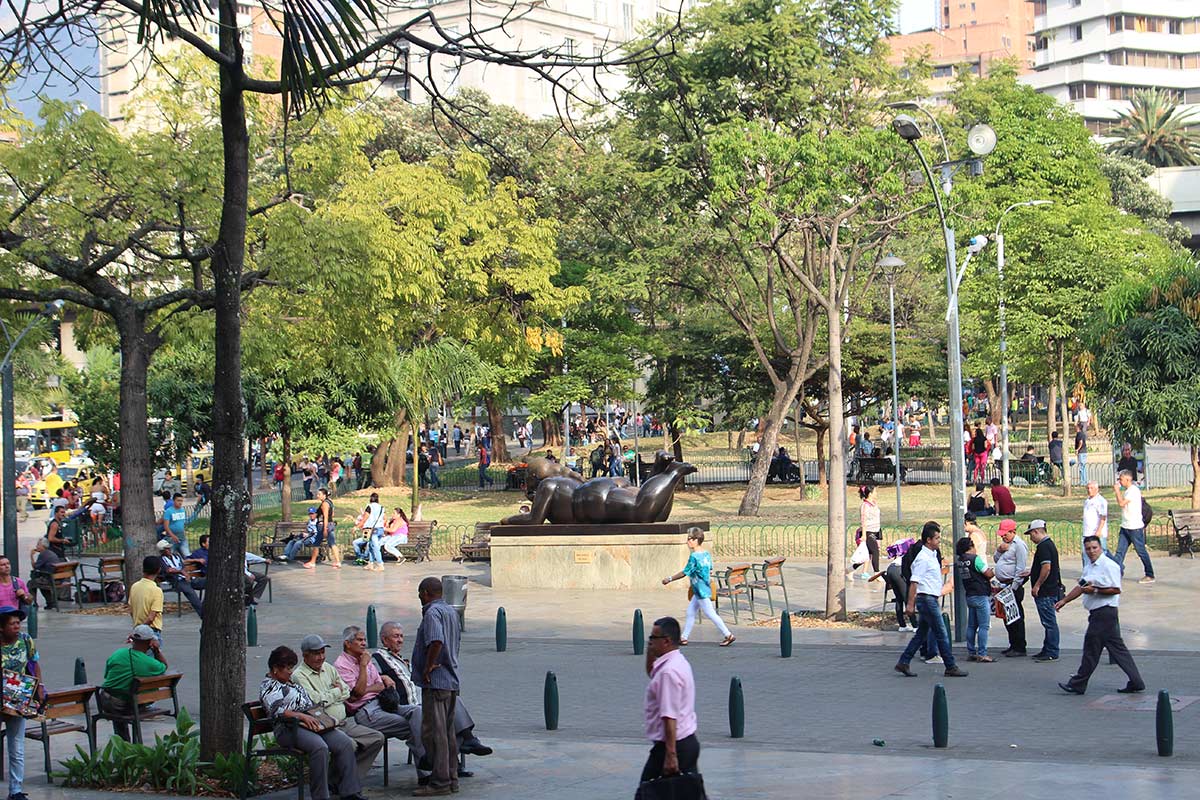 Go shopping. Fashion Group International, the respected non-profit with award recipients like Zac Posen and Wes Gordon, has an outpost in Medellín. The climate allows for locals to embrace fashion in ways similar to New York or Paris than other Latin American cities.

Medellín's younger generation of creatives read more Rag & Bone than Carolina Herrera, but one of the hottest young designers in Colombia is Andres Pajón. Whether you're in the market for a beautiful one of-a-kind creation garnished in luxe materials like marabou feathers and handcrafted beadwork, or just window-shopping, the dynasty-esque flagship boutique has a beautiful back courtyard and is worth a visit. I wouldn't be surprised if Pajón makes his way to New York Fashion Week in the near future.

If interiors are more your thing, pop into The Blue House, a home decor and exhibition gallery featuring goods made in Colombia. It was the ideal place to shop for gifts for friends back home and souvenirs to decorate my apartment in New York City.

Makeno is another great spot to find local designers — it's hard to leave without putting a dent in the wallet. The design incubator has a mix of menswear, womenswear, jewelry, and accessories. They also have a delicious restaurant downstairs that serves amazing Antioquian cuisine.

To experience the city's exciting art scene start with Fernando Botero, one of Colombia's best-known sculptors and a Medellín native. His exaggerated figures can be seen in public spaces from New York to Paris, and his signature style, Boterismo, has undoubtedly influenced the sketch artists you see around the city. You can view his work at Plaza Botero, Museo Botero, and Museo de Antioquia, which houses the largest collection of Botero's art. Museo de Arte Moderno Medellín is another wonderful museum to check out. With a permanent collection of feminist Colombian artists like Débora Arango — known as the first public woman in Colombia to wear pants — and exhibitions from ad-exec-turned-artist Antonio Caro, you'll walk away with a wide berth of social commentary on Colombian society, past and present. 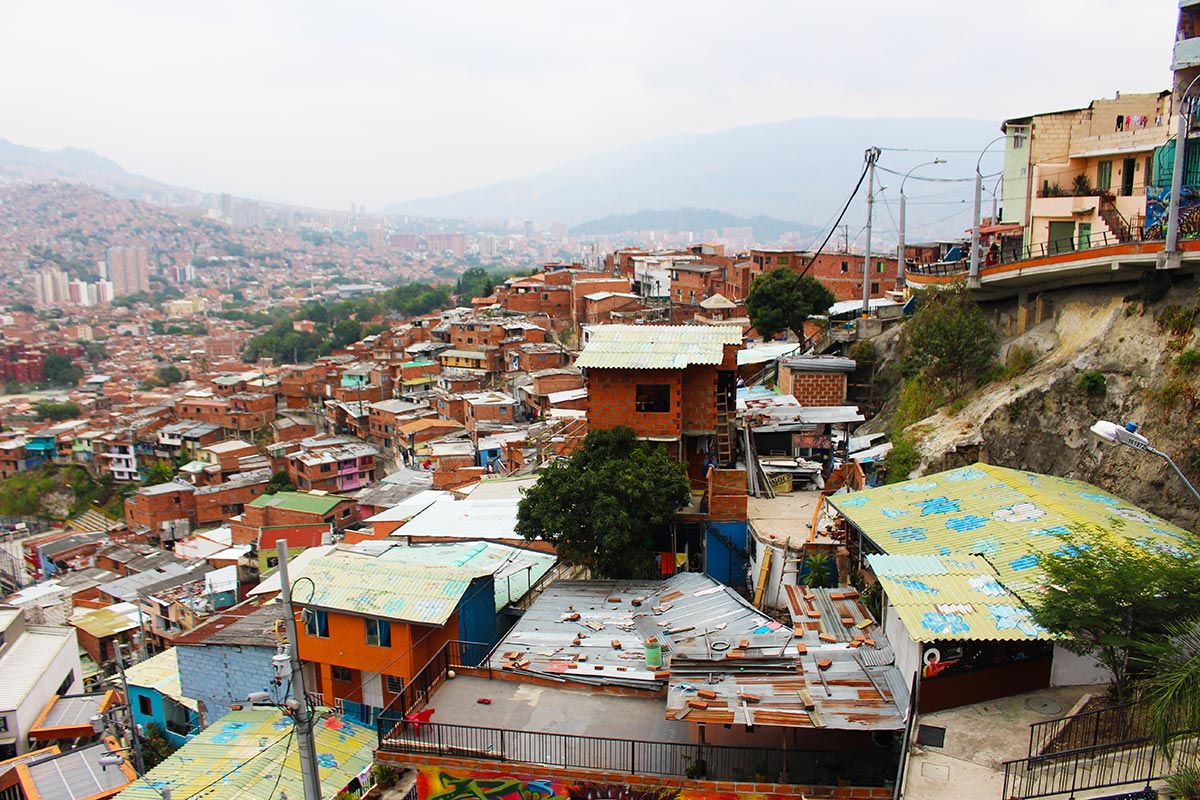 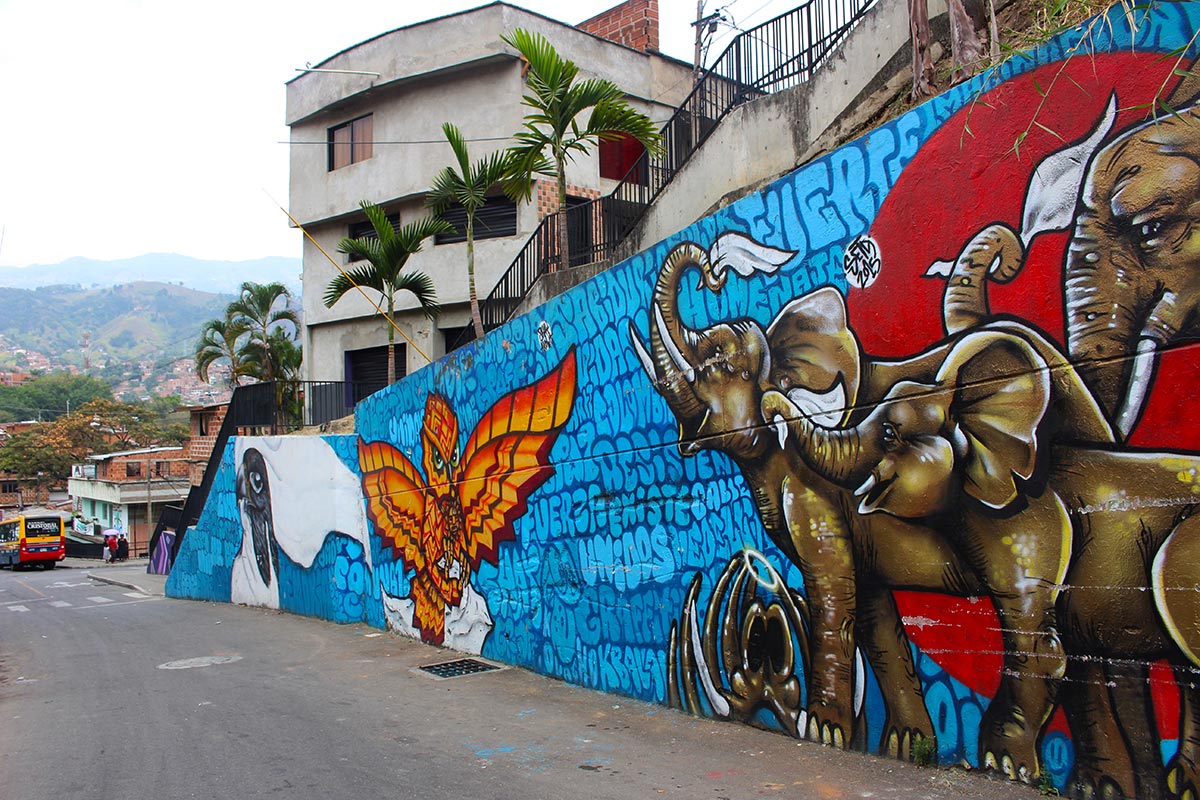 In Medellín, art is not limited to museums or plazas, there's a thriving street art culture. Head to the San Javier neighborhood, also known as Comuna 13, to see it up close. The densely populated neighborhood was once considered among the most violent in the city, but today, having undergone a revitalization, it's a prime example of Medellín's urban renewal. Public spaces were renovated and covered in beautiful murals that tell the history of the neighborhood and Colombia. Tourists flock to the area during the day to see sweeping views of the city from the metrocable and outdoor escalator — both built to give the people who live there access to the rest of the city. Start your visit at the San Javier Library.

Feel like a kid all over again with a trip to Parque Explora, where the goal is to explain science in layman's terms. Normally, I would not think to visit an interactive science museum, but I'm thrilled that my guide put it on my itinerary. I stared in awe at the largest freshwater aquarium in Latin America, but the "Mind, Open World" interactive neuroscience exhibit is what really sold me. Mind blown.

While in Zona Norte, take a beautiful stroll through Jardin Botanico, or better yet, have lunch at In Situ, a delicious restaurant in the heart of the garden. 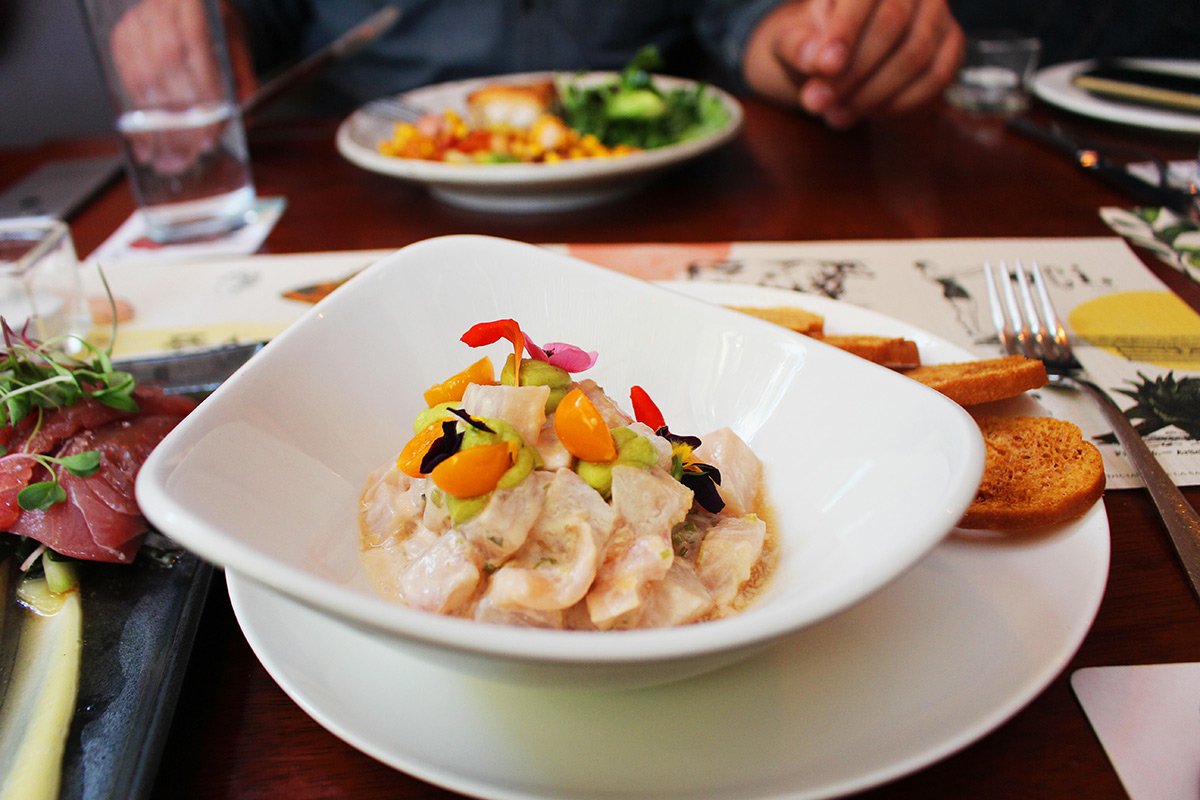 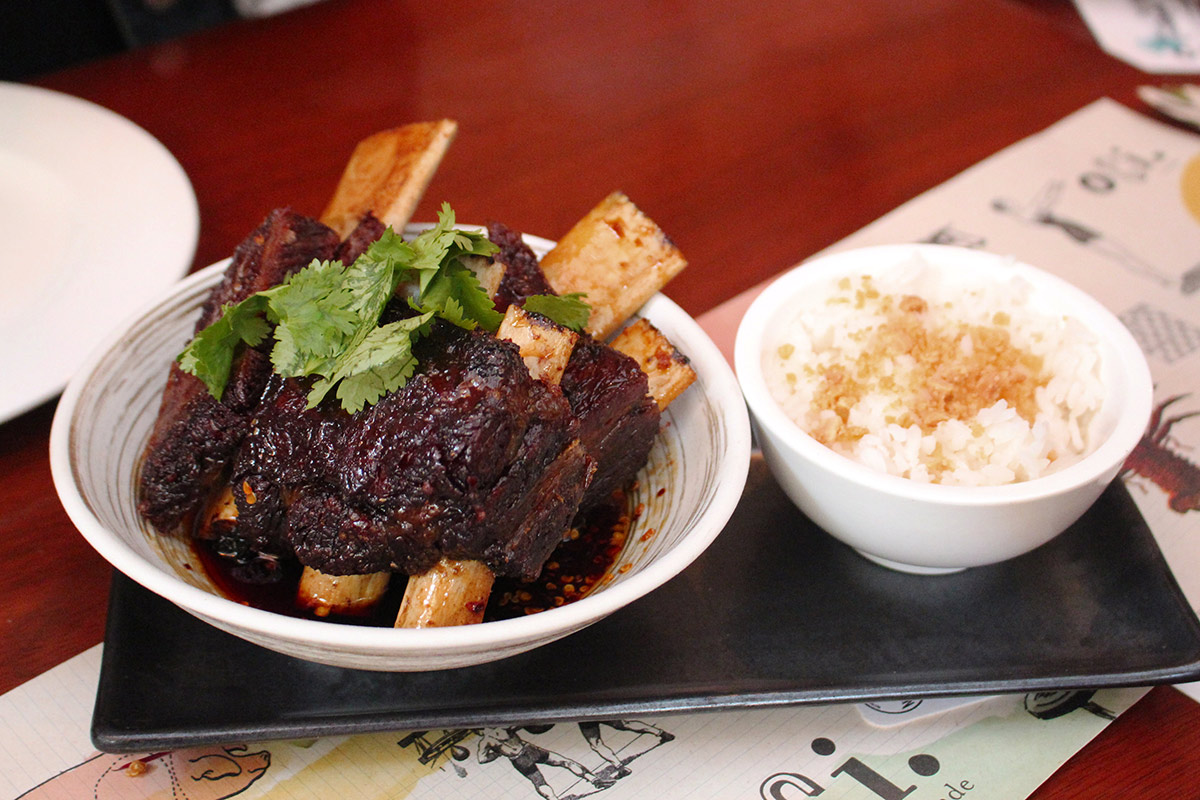 One of the local dishes that you must try is bandeja paisa, a typical Antioquian-Colombian breakfast consisting of arepa (a Colombia corn based bread), red beans, rice, avocado, chicharrón, carne en polvo (a type of ground beef), chorizo, fried egg, and sweet plantain. Sounds like a big breakfast, huh? I can't think of a better way to fuel a day of sightseeing or cure a late night of drinking. I had my first bandeja paisa at Luxé by The Charlee in Guatapé, but if you're down for exploring, a great place to try the dish is Brasarepa in Envigado.

Another traditional Colombian dish that you must taste is mondongo, Antioquia's traditional tripe soup with potatoes, cilantro, corn, peas, and a few other sides of your choosing. Mondongo's in Poblado is a great place to try the stew.

The Charlee has two delicious restaurants: Envy, where you can nosh on the city's best sushi while taking in spectacular views of Medellín at night, and Lucia Restaurant, which I loved for lunch. Snag a table on the square, people-watch, and be sure to try the polpo a la griglia.

Carmen, once ranked the number one restaurant in the city and a forerunner in Medellín's culinary boom, is a must for fusion fare and bespoke cocktails. Run by a charming couple from the US with Colombian heritage, the restaurant's inventive menu was a necessity when they opened eight years ago due to the limited availability of many ingredients. Today, the space is as beautiful as the food is delicious. Try to get a seat in the garden.

Ocio is another fusion restaurant with a heavier Colombian influence. An amazing place to go for brunch or a casual dinner, the ceviche is absolutely mouthwatering. The restaurant is known for its excellent meats, like the pernil, a slow roast pork, and short ribs, cooked for twelve hours.

Start your evening in Parque Lleras in El Poblado. It's packed with wonderful bars and a few nightclubs. If you're down to dance the night away, in true Colombian style, head to Rio Sur, which is kind of like a mall for nightclubs. On the sixth and seventh floors you can take your pick of EDM, reggaeton, and rock. There's something for everyone. While you're out, have at least one shot of aguardiente, Colombia's anise-flavored national drink. 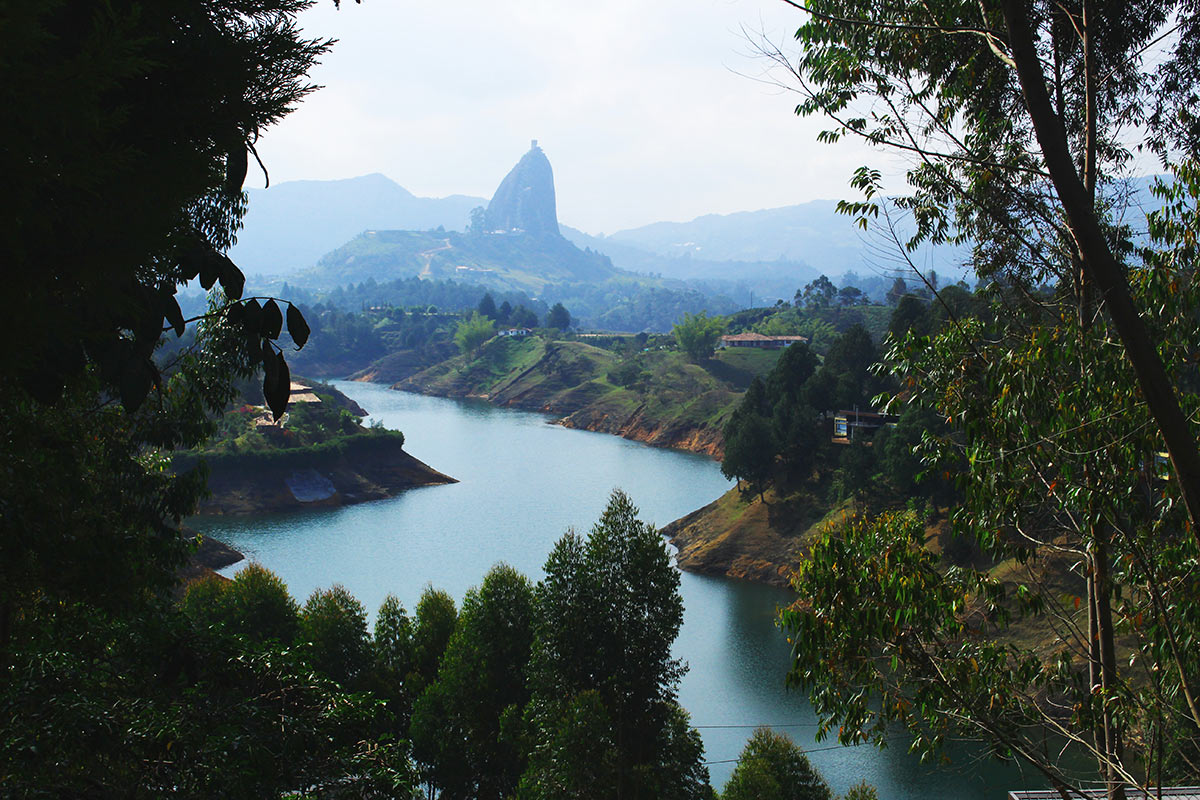 A shot of Guatape from above. 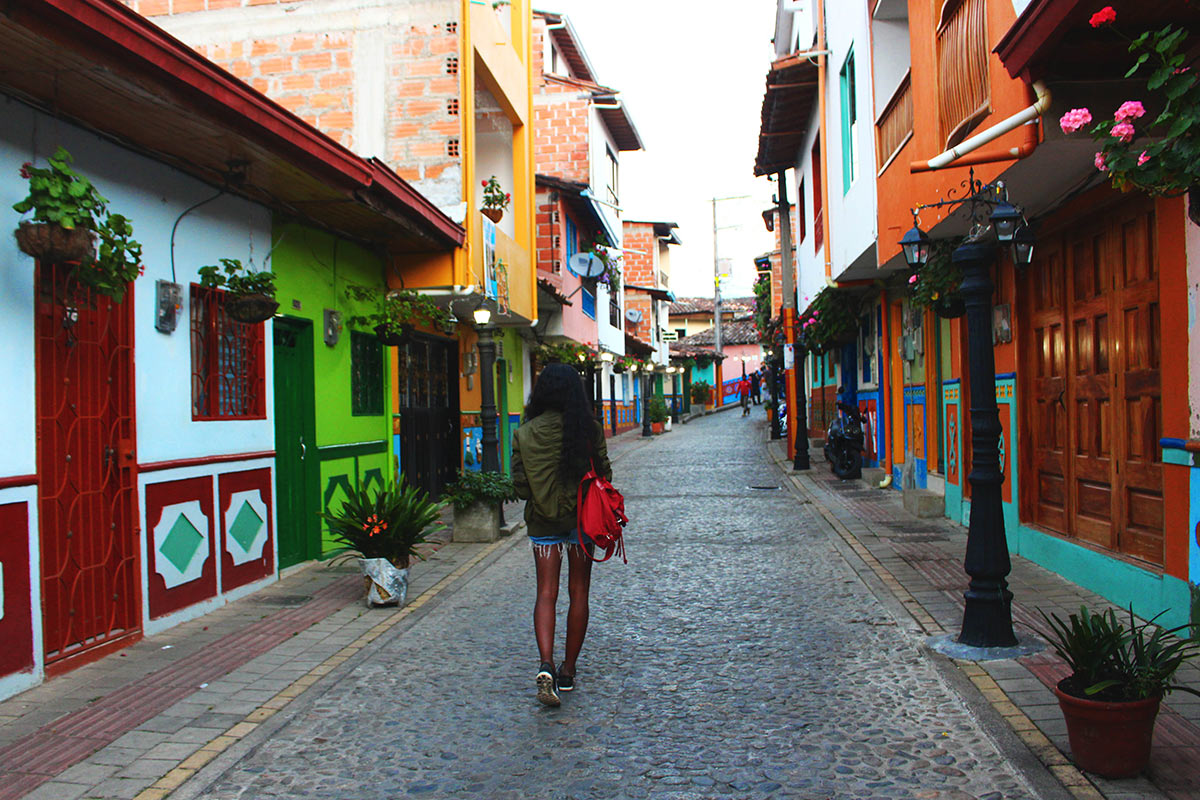 Where to Go Next

If you're in Medellín for a longer stay, make a trip out to Guatapé. The city's year-round spring makes weekending very popular, and many locals flock to the town's lakeside homes. It's less than two hours by car and makes a nice day trip if you can't stay longer. Climb the 700 plus stairs of La Piedra del Peñol for incredible views of the man-made lake. The brightly colored streets (called El Pueblo de Zócalos) are an Instagrammer's dream. If you do decide to go to Guatapé, start your trip there and splurge on a helicopter ride back into Medellin; seeing the city sprawling across lush green valleys is one of the most incredible and memorable sights.

Major US carriers like JetBlue, US Airways, and American Airlines offer non-stop flights to José María Córdova International Airport (MDE) from Fort Lauderdale and Miami. From Europe, your best bet is Iberia from Madrid or British Airways from the UK with stops in Bogotá.

Medellín is the only city in Colombia with a metro system and it's relatively easy to use. It's also fast and safe and cheap (less than $1 per trip). Uber is extremely popular in Colombia, and because of the strength of the American dollar versus the Colombian peso, it was my transport of choice.

The best part about Medellín is that the weather is ideal year round. Go whenever.