The New York Pizza Project is an online compendium and coffee table book documenting old-school pizzerias and the dough-slingers, slice fiends, and neon signage that make them so special. And it calls the most appropriate group of guys its founders — five ordinary New Yorkers who simply love pizza. Fathom's Daniel Schwartz sat down with two of them, Gabe Zimmer and Nick Johnson, at Phil's Pizza in New York's West Village, to talk about their tribute to one of the city's most beloved institutions.

I'm glad we're doing this interview over cheese slices. Because I've been craving pizza ever since I discovered your site. What inspired you guys to start The New York Pizza Project?

Gabe: We have strong ties to our neighborhood pizza parlors. We grew up in them. We still eat in them. We love the purpose they serve in their communities. But they're slowly disappearing. So we decided to document them through photography and interviews just in case they're all gone in twenty years. And we did so without ranking the best slice. The project is about pizzerias themselves.

Nick: You can tell lots about life in New York City through the lens of a pizza shop. It's fast. It's grab-and-go. It's loud. There are lots of characters. The project is as much a study on pizza as it is on the people of New York.

Let's hope they never disappear, because how sad would it be if we all had to order from Dominos. How did this turn into a coffee table book?

N: We're the kind of guys that can sit around and talk about pizza forever. We actually like doing that. Six years ago, one of us decided that we should turn talk into action and author a book about pizza. The idea was to photograph old-school pizzerias, their interiors, and their signage, but once we started talking to the owners and customers, we realized there was something deeper there. The idea developed into the book over the course of five years. We did a Kickstarter and tons of New Yorkers rallied. We published in September 2015. 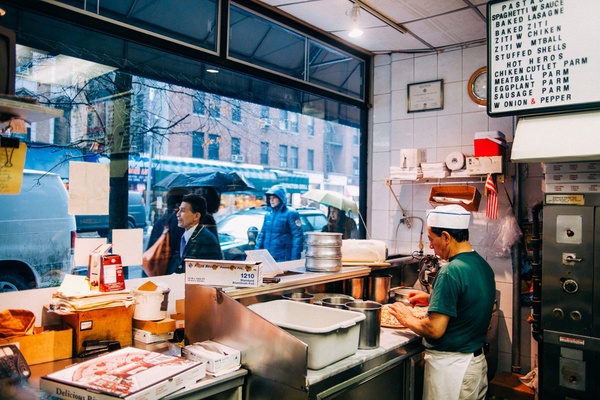 A regular scene at Mike's Pizza on the Upper East Side. 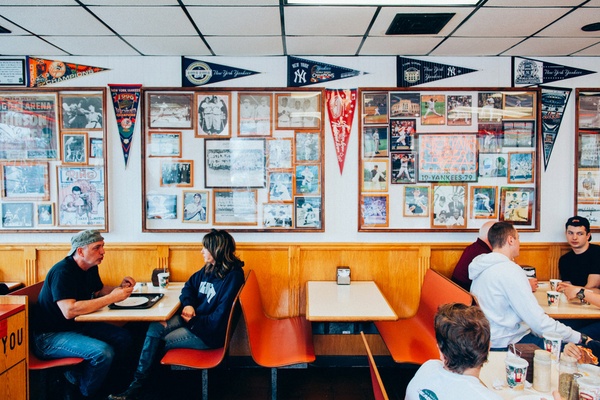 There's audio of your interviews on the website, which means there's actually more content online than in print. Why was having the book printed so important?

G: It feels good to have a hard copy. We've been pitching the idea to pizzerias for five years and a common response from the people behind the counter is, "right, you guys run a blog." But when we brought in the book, the idea registered with everyone. These guys work twelve-hour days, six days a week. They know other pizza joints, but they're not really going to them. The book puts their world in one place and allows them to see how everyone else is doing it.

N: And it gives pizza makers a medium to network with one another. If you didn't know any better, you'd think our book signings and gallery openings were meet-and-greets. Most restaurants rely on marketing and social media for exposure. The business model for pizzerias hasn't changed much since 1965. Maybe they're doing online ordering, but otherwise, they're stuck in time.

There are hundreds of pizzerias in NYC. How did you decide which to visit?

G: Our plan wasn't to cover all the city's pizzerias, just places with distinct personality. We started with places we were drawn to visually, but what we were looking to capture changed as we talked with people and visited neighborhoods we'd never been before (and probably wouldn't have visited otherwise). It wasn't about finding the best slices in New York. It was more about who we could meet and how many representative pizza parlors we could cover.

N: For example, I passed on two pizzerias in Bay Ridge that have been around for a while, but had no swag whatsoever. We didn't need to shoot that. I think we got to most of the places with character in NYC. Even so, we were in The Bronx for a radio interview and found this incredible spot called John and Joe's. The interiors were an acid trip. Neon f*cking everywhere. Hand-printed stuff, too. That never made it into the book, but hopefully we continue to find more spots like that.

Between the five-man team, how did you go about dividing the work?

N: As photographers, Gabe and I would split up and walk the streets with one or two dudes who handled interviews, stopping into places that caught our attention. There were important neighborhoods and famous pizzerias we had to cover, but we didn't have a rigid plan. It was more about visiting neighborhoods and seeing what was there.

G: At most, we would map out one or two places we heard about and then look online to see what was popular. But often, as long as people in the pizzerias talked to us (which wasn't all the time), we got an idea of where to visit next. It was fluid. 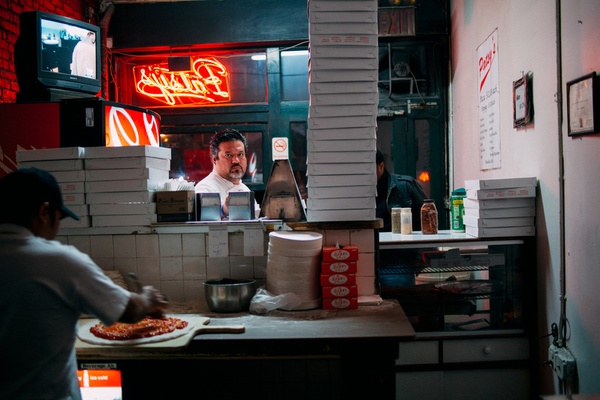 A customer at Patsy's Pizzeria in East Harlem. 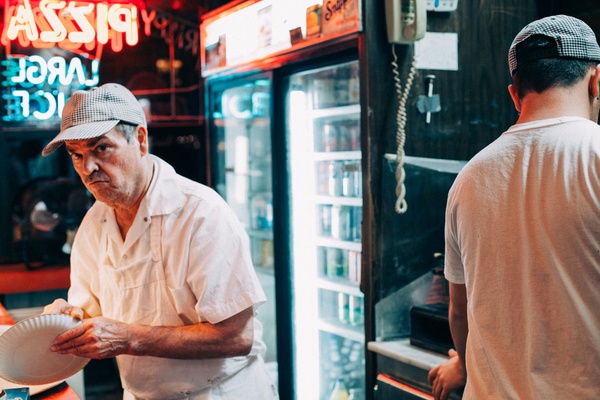 Carmine of Sal and Carmine's on the Upper West Side. 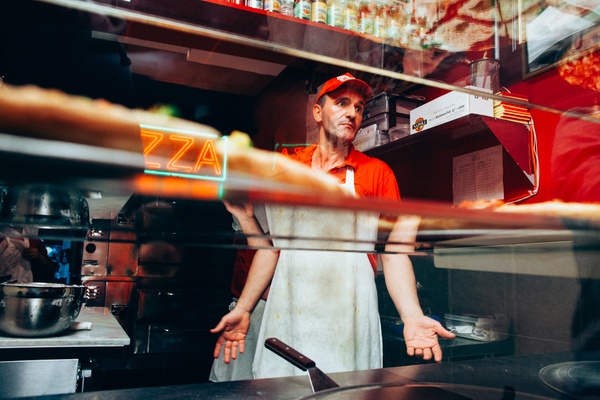 Luigi from Stanton Pizzeria on the Lower East Side.

What do you ask the pizzaiolos and the customers?

N: The guys making the pizza: Where are you from? How long have you been in business? How has the neighborhood changed? The guys eating the pizza: What does the pizzeria mean to you? Conversations with eaters were casual and informal, and when they didn't have much to say, we resorted to small talk bullshit and got random quotes. As long as it happened in a pizzeria, it qualified for the project.

G: Sometimes, owners would introduce us to their regulars, which was really special. Many pizzerias are losing their regulars to online ordering. Bruno from Dino's Pizza & Pasta in Astoria has never seen the face of many of his regulars. He's a people person, and wants to meet them and say thank you, but he knows them only by name and address. Isn't that kind of sad? His business is doing great, but it's different.

Why is pizza so special to New Yorkers?

N: It's comfort food. It's meant to be shared. It's food for celebrating and for feeling down. It's the food of the people.

G: Kids, too. Pizzerias are one of the first places that accepts children as customers.

N: After class was over in middle school, what were we going to do? It was pizza or McDonalds.

G: There aren't many places kids can walk into and be considered real people when they're on their own. But if you're walking around with $5, you can go into a pizzeria and get some garlic knots. They're cool with it.

N: And at that age, I couldn't even discern the cultural difference between McDonalds and pizzerias. But I still chose slices over Big Macs because of that pizza shop vibe.

G: We spent time there without worrying we'd be kicked out. For us, it was a safe place to hang when we couldn't outside.

N: You can sit down and read or get a quick bite. There isn't much commitment involved. I think New Yorkers appreciate that. 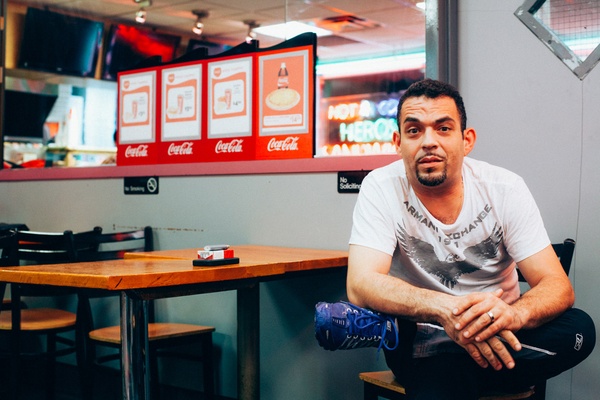 John from Broadway Pizza & Pasta in Kingsbridge, The Bronx. 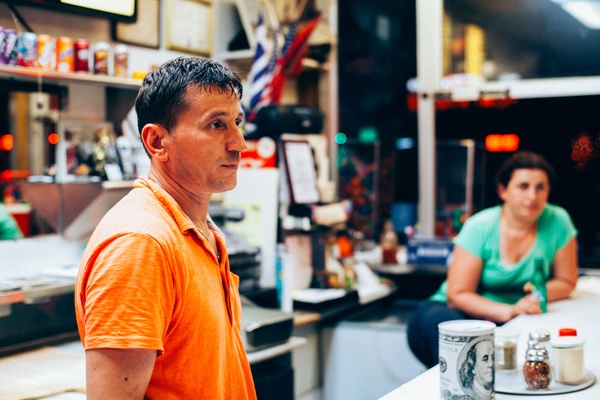 Anesti and Lina from Sam's Pizza in Kingsbridge, The Bronx. 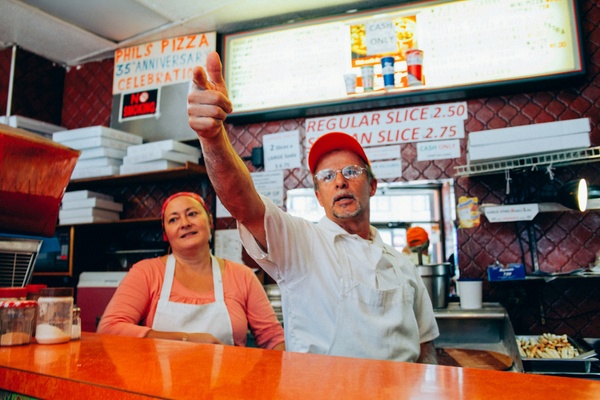 Rose and Tony from Phil's Pizza in the West Village.

What was your favorite story from the project?

N: We interviewed the owner of Broadway Pizza & Pasta, a famous shop on 232nd Street in The Bronx, and found him super bitter about the trajectory of his life — his father forced him into pizza-making and before he knew it he was 45 with no passion. It was really depressing. Then we went to Sam's Pizza up the block. The owner there immigrated to America with the dream of owning a pizzeria. He was employed by Sam, the original owner, and ten years later, took over the shop. Now he works with his wife and kids. He couldn't be happier. It was the tale of two cities on 232nd Street.

G: Pizza was that man's life. And he hated it. He called his shop his jail. But we included his story anyway. We wanted to hear from everyone, even those who were unhappy with their jobs.

N: There were so many other adorable stories, though. Rose and Tony, the owners of Phil's, met at their own pizza shop. Rose was working across the street and Tony was working the counter. There was a no-show and he needed someone to fill in. She ended up covering. They got married a couple of years later.

What do you think it's like working in a pizzeria?

N: It looks like long hours and tons of repetition, but when we talk to owners, they're generally very positive. It's a world they're committed to. As they say, it tastes better when it's cooked with love.

How do you eat your pizza?

N: We overheard someone say that a true New Yorker is someone who can make eating a slice of pizza while walking down the street look good. I agree.

What's your favorite pizzeria at the moment?

G: Sal and Carmine's on the Upper West Side. The guys behind the counter aren't friendly. And I love it. They serve your slice with that classic New York attitude.

N: Sal and Carmine's is incredible, but I like Louie and Ernie's in Schuylverville in The Bronx. It's in the middle of suburbia, a long walk from the train, and it doesn't look like any other pizzeria I've ever seen. The slices are knockout. It's in my top three, and I've only been there twice.

N: It's pizza just like a Big Mac is a burger. There's a time and place for it. One of the worst things I've seen recently was a group of guys eating pizza in a Dominos in the West Village. I just stared inside and thought, “how could this happen?” Keep that behind closed doors. 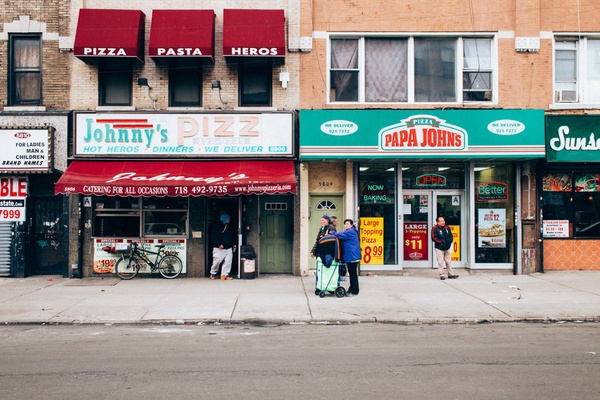 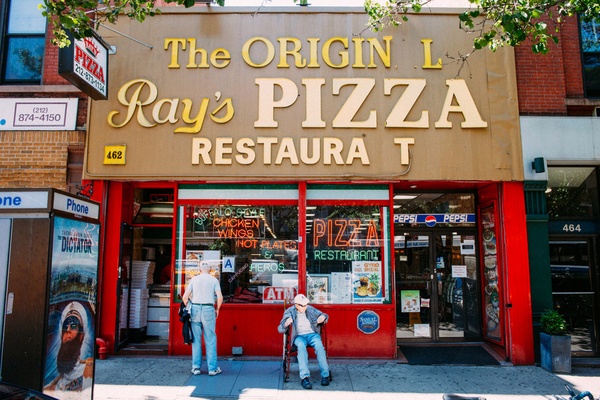 Famous Original Ray's Pizza on the Upper West Side. 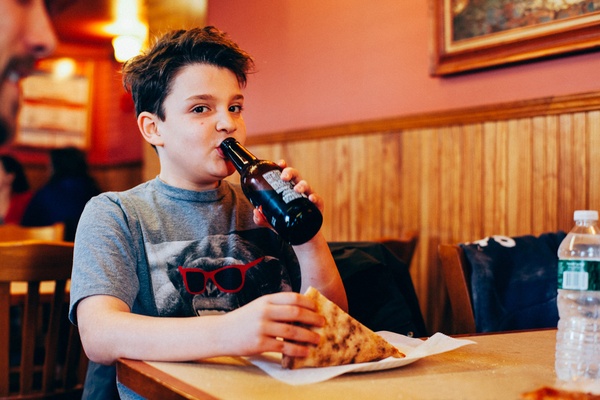 Nicholas from Louie & Ernie's in Schuylverville, The Bronx.

What is the future of old-school pizza parlors?

G: Times are changing in New York. Places close all the time, and they're not being replaced by other slice shops. It's tough seeing my hometown taken hostage by tourism, rising rents, greed, whatever it is. I hope our project can help raise awareness and promote business for these kinds of pizzerias.

N: I think parlors are jeopardized in neighborhoods undergoing gentrification. But they're pretty secure on the outer edges of New York City. Pizza shops in Bensonhurst have been around for half a century because they have relationships with their community. They're not going away until the yuppies swoop in. But it's a long ride on the D train to Manhattan at that point.

Available online at nypizzaproject.com for $29.95.

This interview was edited for clarity by Fathom's Daniel Schwartz.