A seasoned traveler steps away from his guidebook to discover one of Beijing's lesser-known and more surprising neighborhoods.

BEIJING, China – As the bus rumbled west past Caishikou Station, I watched as the predictable geometry of the Chinese shop signs suddenly gave way to the graceful curlicues of Arabic. I knew that I had arrived in Niujie, the center of a steadfast community of Chinese Muslims who have called this city home for centuries.

I first came across Niujie while flipping through my Lonely Planet guide near the end of a fourteen hour trans-Pacific plane trip. A barely two-sentence writeup told readers that the area's name meant "Ox Street" and that the local mosque dated back to the 15th century. Other guidebooks and an online search were hardly more enlightening, describing the community's history, but giving little hint of what could actually be found there today.

I grew more and more intrigued by the possibilities surely hiding behind those meager two sentences and resolved to go and discover them for myself. As I stepped down from the bus and headed down the street, I soon came upon the cornerstone of the neighborhood – the Niujie Muslim Supermarket (No. 5, Ox Street, Xicheng District). 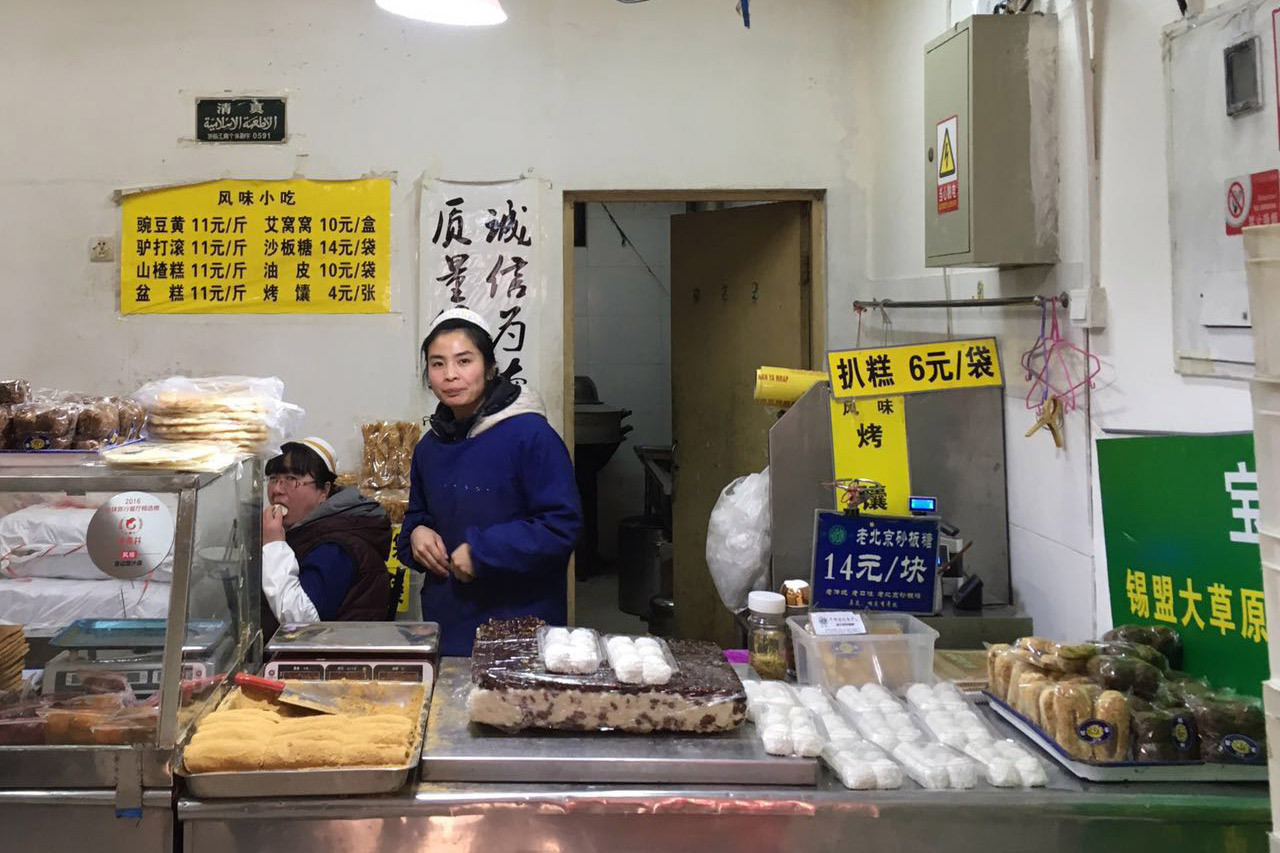 Decor takes a backseat to the food in this bakery along one of Niujie's many side streets. 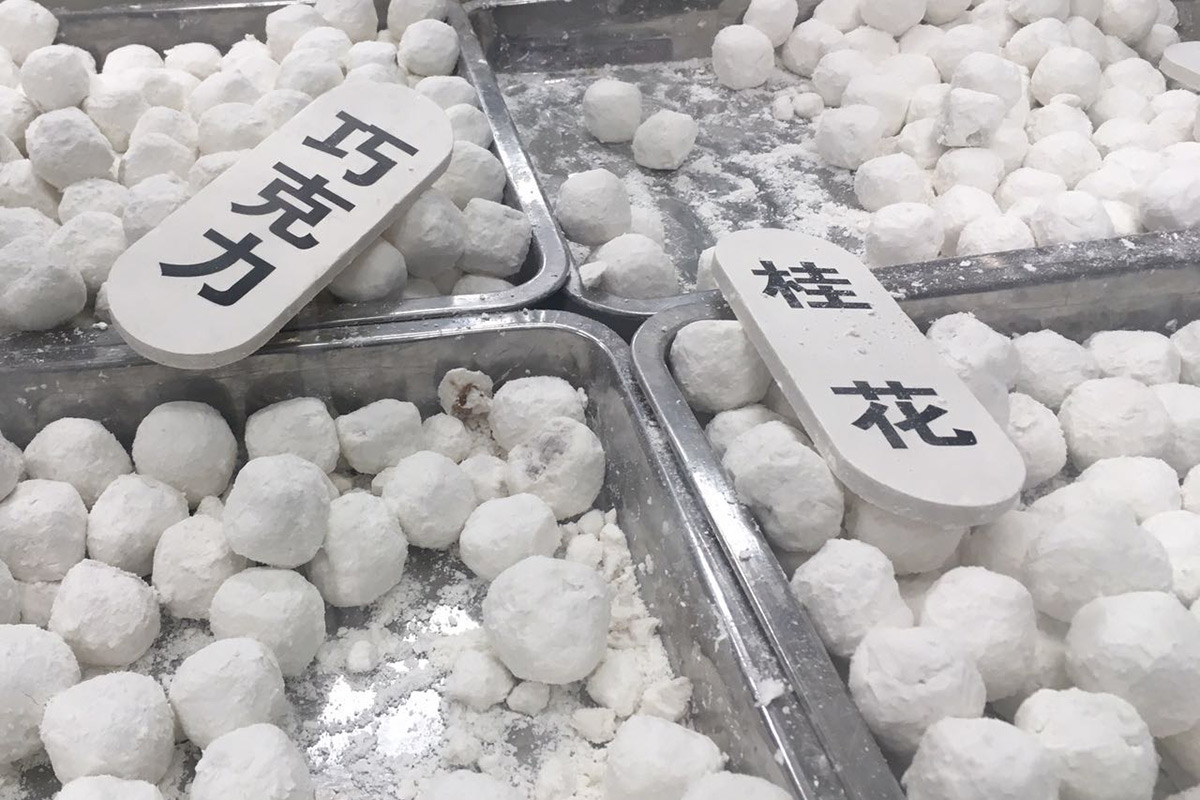 Usually a holiday treat, sugar-coated yuanxiao rice cakes are sold year-round in a variety of flavors.

Inside, I was greeted with an island of wooden barrels piled high with nuts and a rainbow of dried fruits from China's far western province of Xinjiang, a majority Muslim region heavily influenced by its Turkic and Kazakh neighbors. Otherwise, the scene was little different from that in any Chinese supermarket, though a closer look showed every product bearing the stamp proclaiming them certified halal.

Turning a corner, I found something much less ordinary. I was now in the bakery section, and bumping past shoppers who crowded around on every side, I peered over heads and between shoulders to see what was for sale. What I saw looked nothing like what I had come to expect from Chinese food — piles of savory biscuits alongside layered fruitcakes topped with swirls of jelly.

I noticed one treat that looked familiar: Beijing's famous ludagun'r, a red bean rice cake whose brown sugar coating inspired its colorful if unappetizing name, meaning "donkey rolling in the dirt." But while shops in other parts of town sold ludagun'r cellophane-wrapped in neat, bite-sized cubes, here I watched as bakers pounded it into heavy loaves, ready to be freshly sliced off and dished out by the pound.

Wandering through the bakery, I basked in a vicarious sugar high, but I wanted something more. I was eager to find the spiritual side of Niujie, and discover some sign of the faith that had kept this neighborhood alive through the centuries.

Heading further down the street, storefronts and apartment blocks soon gave way to a weathered stone wall topped with a dark tiled roof. It could have been the ancient home of some great mandarin, perhaps, or one of the many temples dotting the old city. But a sign out front announced that this was in fact the Niujie mosque. 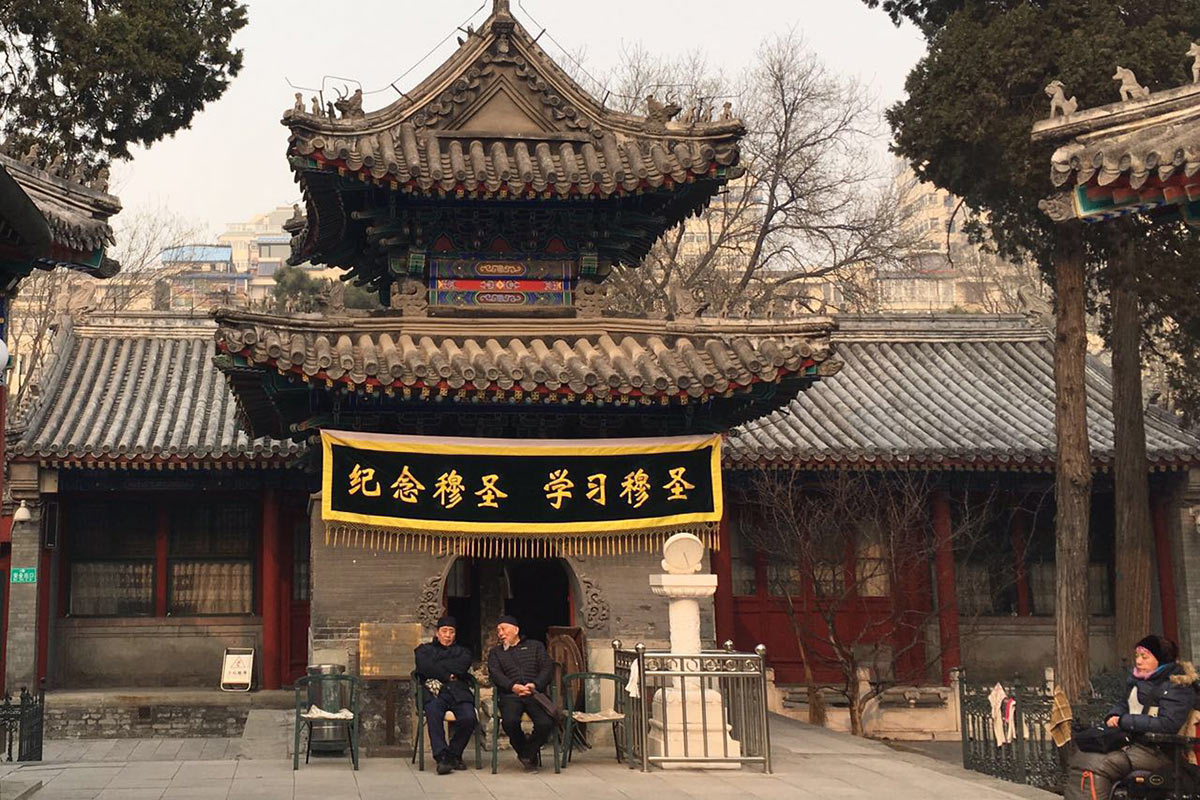 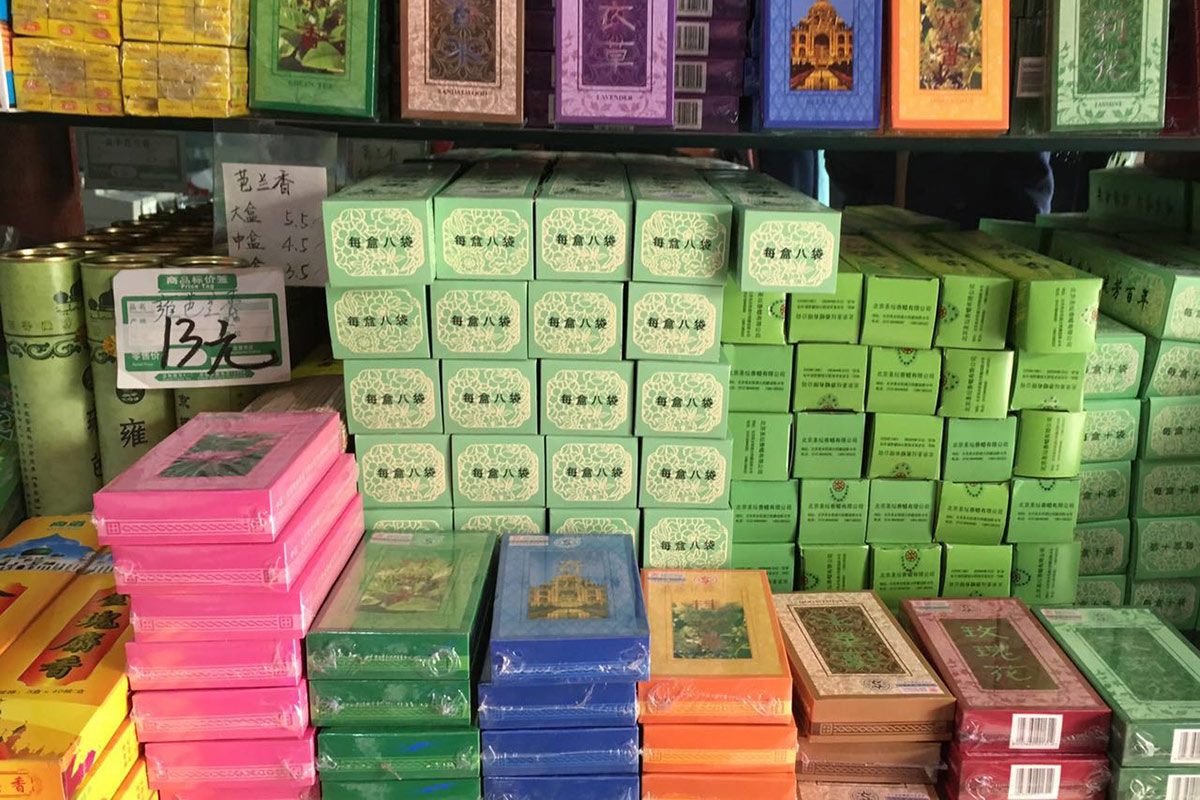 It was a strange feeling to leave the noise and commotion outside for the empty, silent courtyard within. A subdued palette of gray and green prevailed, solemn and contemplative. The mosque was nearly deserted, save for pairs of elderly men in heavy coats and wispy beards who strolled about, speaking quietly and wearing suitably grave expressions. On either side of the courtyard stood two pagodas. A helpful sign explained that one was for sounding the call to prayer, and the other for observing the moon to determine the start of Ramadan.

The doors of the main prayer hall were shuttered against the cold, but curiosity led me to peek inside through a small window. The interior radiated with the warmth of red and gold lacquer, as intricate floral patterns and Arabic calligraphy climbed up columns and across arches. I stood taking in every detail, marveling at the contrast with the austere courtyard outside. Pulling myself away, I was determined to find what other secrets this neighborhood was hiding.

Another block down the street, and it was clear I had entered the local part of Niujie. A scrum of middle-aged men jostled around a battered coffee table hauled out to the middle of the sidewalk, cheering on their friends in a heated game of poker.

I came upon one narrow doorway topped by an intriguingly vague sign, simply reading "Ethnic Products." Inside, I ducked through a dim labyrinth of halls piled floor to ceiling with Islamic books, from heavy theology texts to simple introductions for new believers. One pocket-sized pamphlet used theories from traditional Chinese medicine to explain the Islamic ban on eating pork.

The owner, who had moved two years ago to Beijing from Xinjiang, greeted me with a smile and introduced his wares. As I departed, he handed me his business card.

I scowled at a line of Chinese characters at the bottom, which translated to English as "press win two eye." Was there some deeper message here I wasn't getting? I felt a familiar confused feeling from my Mandarin lessons in college. I read the characters aloud, to let out my frustration more than anything else, and stopped in my tracks. "Salaam aleikum," I heard myself say. "May peace be with you."