Don't leave home for Barcelona without a great pair of flats, a camera, and a hearty appetite. There's a lot of walking and seeing and eating to do in the historic European city.

WHERE TO EAT AND DRINK

Barcelona is a city for snacking — there is a whole cuisine and culture built around it — so get comfortable sitting at the bar. Pay homage to the old-fashioned, well-worn, and much-loved tapas joints. Cal Pep is casual and traditional, run by gregarious gentlemen who give out tastes and top off beers for the gastronomically curious (do engage them behind the counter). Quimet y Quimet offers big pours, heaps of fried stuff, and a boys' club camaraderie. Both are open for lunch.

Dos Paililos is a high-end, hot-ticket, tiny Asian-inspired tapas bar from a former chef de cuisine at El Bulli. His wife is the Japanese sommelier. Though the food is quite serious, the scene is very laid-back (and a little rock-and-roll). You'll need a reservation ahead of time. 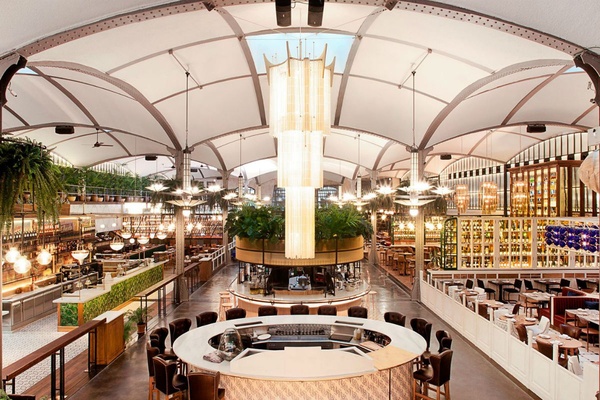 In a city of strict dining rituals, the brand new El Nacional is an aberration, as it is one of only a few great options I could find open early morning to late at night including Sunday and siestas and ready to cater to all kinds of eating moods and types. Reminiscent of a Spanish Eataly, the beautifully designed space (soaring ceilings, mosaic tiles, open-air marketplace feel) offers multiple dining and drinking experiences under one roof where you can sample traditional Spanish dishes made with excellent ingredients and products.

The sandwiches at Sagas — pork-heavy with fresh ingredients from the family farm of the Michelin-starred chef who put together said sandwiches — might be some of the best you'll ever get your hands on. A fantastic second dinner in the hand.

Make reservations ahead of time for Albert (and Ferran) Adria's avant-garden Tickets, where nothing on the menu is as it seems. In a league of its own. El Celler de Can Roca took the #1 slot in the 2015 edition of The World's Best 50 Restaurant Awards is north of Barcelona along the coast in Girona. Reservations are essential.

La Boqueria is the celebrated daily market where you can and should sit down at a stall for a bite of tapas and a glass of cava. Go early to avoid crowds (the market opens at 8 a.m.) and stop by local favorites El Quim de la Boqueria and Bar Pinotxo for double breakfast.

For bites and drinks late at night, hit up Cerveceria Catalana, a lively beer bar with grilled specialties and a great evening atmosphere. Or take the stairs through three levels of Fabrica Moritz microbrewery and brasserie where you can tipple unpasteurized beer and take home branded souvenirs. 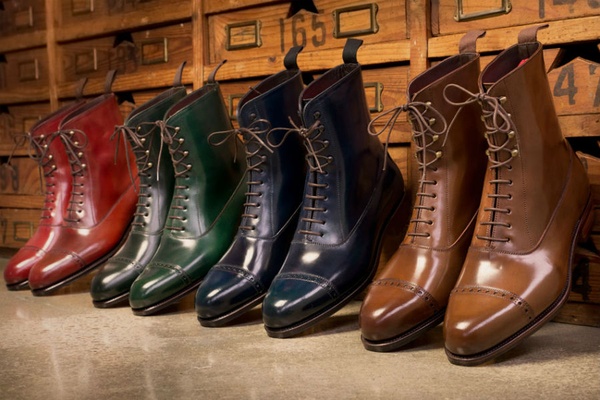 A beautiful place to pick up edible souvenirs (top-of-the-line cured meats, teas, spices, and wine, and other beautifully packaged delights) is at the modern Vila Viniteca.

There's no leaving Spain without handmade espadrilles. Get a few affordable pairs in a variety of colors at La Manual Alpargatera, a small and unassuming '40s-era workshop in the Gothic Quarter. For a more high-end option, head to the Castaner family shop Cristina Castaner, where Yves Saint Laurent had espadrilles made for his models.

Jaime Beriestain, an Eixample concept store in Passeig de Gracia, the prime shopping artery in Barcelona, sells everything from olive oil to furniture curated by the renown interior designer of the same name. Granja Petitbo, a cafe on Passeig de Sant Joan (another Eixample avenue), attracts a sceney, fashionable crowd. Stop in for a coffee and a snack while shopping.

The 175-year-old jewelry boutique Bagues offers Art Nouveau beauties and 20th-century replicas. Stay in the olden days by taking a brisk walk to La Campana de Princesa, a sweets shop that dates back to 1890. Stop for ice cream and nougat, the house specialty.

Want more bespoke souvenir options? You know what they say about Spanish leather. Since 1886, Carmina has been the artisan of choice for custom and ready-to-wear shoes for men and women. 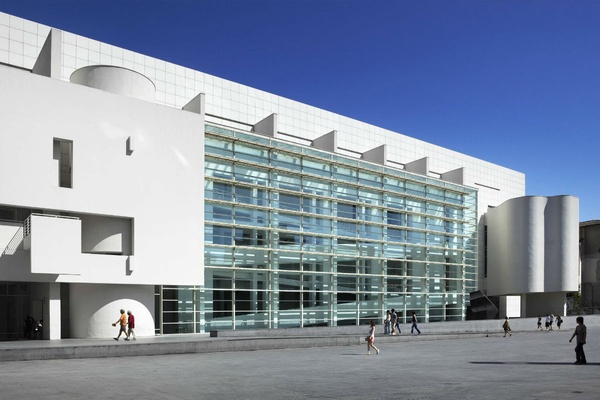 The glorious architecture of the MACBA. Photo courtesy of MACBA.

There are a few famous sites that should not be missed. Park Guell is Gaudi's failed posh housing project turned public-access park. Tickets can be purchased online ahead of time. Temple of Sagrada Familia  has been a work in progress since 1882 (and the UNESCO site still has the scaffolding to prove it). The Roman Catholic Church is a spectacularly grotesque, compelling, and utterly fascinating building filled with light, color, undulating walls, and fantastical features designed by Gaudi. 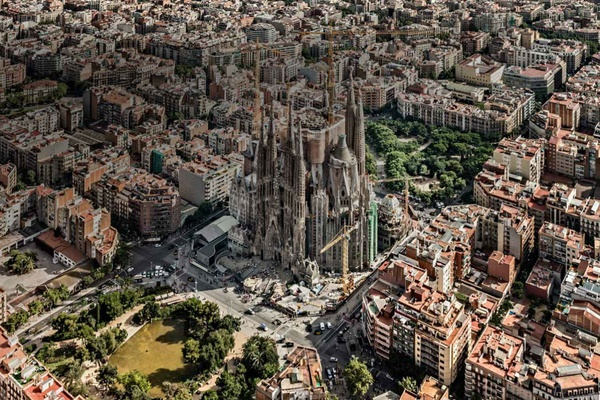 Passeig de Gracia, in the neighborhood of Eixample, is a prime shopping artery in Barcelona (with the city's most expensive residential real estate). There are incredible historic buildings, including many examples of Modernisme, the Catalan version of Art Nouveau. Antoni Gaudí's Casa Batlló and Casa Milà (a real treasure), along with the Casa de les Punxes by architect Josep Puig i Cadafalch are all here. See notes in shopping section below.

You could spend an afternoon exploring the hillside area Parc de Montjuïc that has hosted some of Barcelona's most important events, most notably the 1929 International Expo and the 1992 Olympics.

The museums and structures of note include: Fundació Miró, Museu d'Arqueologia (Archaeology Museum), Museu Nacional d'Art de Catalunya-MNAC, and Mies van der Rohe's Barcelona Pavilion (one of his best and most important). Other highlights include The Magic Fountain, artisans village Poble Espanyol, Botanical Gardens, and The Olympic Ring, which features the stadium, Arata Izosaki's sports palace, the Palau Sant Jordi, and the Santiago Calatrava telecom tower.

The city's biggest park, with a lovely fountain, the Castle of the Three Dragons (designed for the 1888 World's Fair), and the Barcelona Zoo is called Parc de la Ciutadella.

Context Travel Tours is the tour company for people who don't take tours. Knowledgeable and engaging locals (often academics) lead private or small group tours “for the intellectually curious travelers” organized around various themes or to specific sites. Their tours deliver an excellent insider take on the city. Note that they have special tours for families.

Not just for sleeping, but for visiting and having a drink and a spa treatment.

Mandarin Oriental Barcelona is a luxurious hotel — whitewashed and gorgeous — located in a prime location on Passeig de Gracia. As always, the MO has an excellent spa. 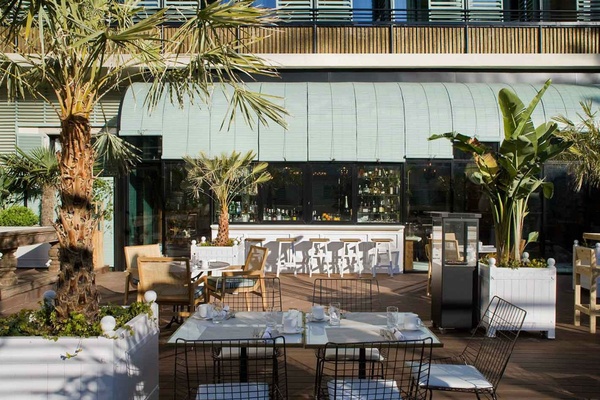 The hot new hotel opening of the year is Cotton House Hotel — in the former headquarters of the Association of Cotton House Manufacturers. There's also a lovely rooftop pool. Barcelona Catedral is boutique-y and centrally located in the Gothic Quarter. Hotel Casa Fuster is a historic modernist landmark on Passeig de Gràcia designed as a private home. Have a drink or a coffee on the terrace Mirador del Paseo for great views of Sagrada Familia.