Just two hours away from Tokyo, you're transported to a group of islands where you can eat fresh fish, hike endless white beaches, and squeeze in some tortoise watching. No wonder the people live to be 100.

OKINAWA ISLANDS, Japan – "You are going to Paradise Island,” said my sister, showing me random Google photos of the Okinawa prefecture — diminutive islands surrounded by swirls of white sand and shaped like Danish butter cookies and oceans filled with all shades of blue.

Historically part of a trading route through Asia, the Okinawa archipelago consists of some 50 islands in the East China Sea. It was part of the Ryukyu Kingdom until 1872 when it became part of Japan.

But it feels worlds away from the hustle and bustle of Tokyo. Forget concrete towers: This is a land of abandoned beaches and wild jungle-like terrains that resemble something from the television series Lost.

It can take a day to reach the more remote islands from Naha, the capital of Okinawa. But you don't have to travel that far to taste paradise, as I discovered when I took the hour-long boat ride last spring from Naha to Zamami, one of three islands, along with Aka and Geruma, the make up the Kerama Islands. 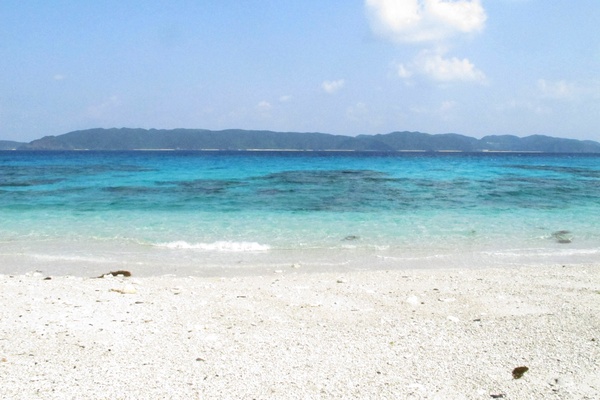 Around 900 people live full-time in this picture-perfect outpost of tranquility, where ocean, beaches, and rugged nature walks ensure plenty of diversions for everyone from sun-worshipers and nature lovers to local culture enthusiasts.

Zamami attracts creatures both great and small. Several hundred humpback whales journey here each year, making it a standout destination for whale watchers. It is also home to a rare breed of deer only found on the island. Butterflies flutter in the wind; goats camp on a tiny nearby island best reached by kayaks piled in bright stacks on white sandy beaches. Locals while away the hours preserving ancient traditions and entertaining the few travelers who make it this far.

The main village just beyond the port is no more than a cute smattering of small dusty streets and alleyways filled with simple hotels, houses, and cafes. The many dive shops on main street serve those who come for the fabled underwater life here. The convenience store at the end of the street is where locals gather at night.

I arrived with a friend from Tokyo one Thursday afternoon and checked into Minsyuku Miyamura (105 Zamami, Shimajiri-gun, Zamami-son 901-3402, Okinawa; +81-98-987-2005), a small, two-story hotel a few minutes' walk from the harbor. It has basic but adequate rooms and a cozy modern cafe.

We had lunch at Marumiya (432-2 Zamami, Shimajiri-gun, Zamami-son 901-3402, Okinawa; +81-98-987-3166), one of the eateries near the harbor. The islanders were devoured a local delicacy of pork and cabbage. I ordered sushi with salad and miso soup, and had a conversation with the mayor about the island over lunch. I learned that the rare Chinese herb bing pian (borneol flakes) had once been the main trade here, but tourism has since replaced it. New initiatives include new two-hour hiking trails around the island.

Too full from lunch, we set out on a tortoise-watching expedition for the afternoon and were soon in a glass-bottomed boat which revealed mushroom-like corals, small fish, and tortoises floating through clear waters. We went back and forth, scouring the ocean for more creatures, bobbing in the waves, looking at the shoreline, the wind blowing in our faces. 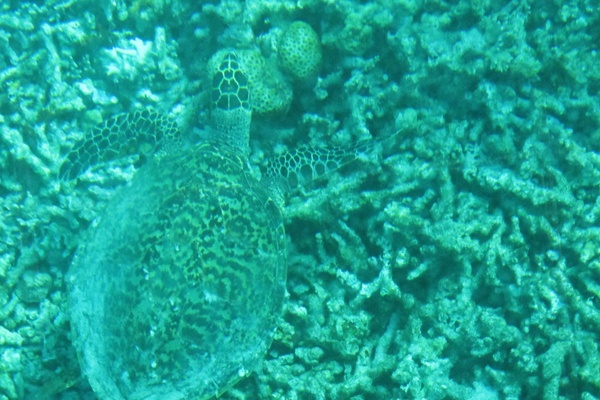 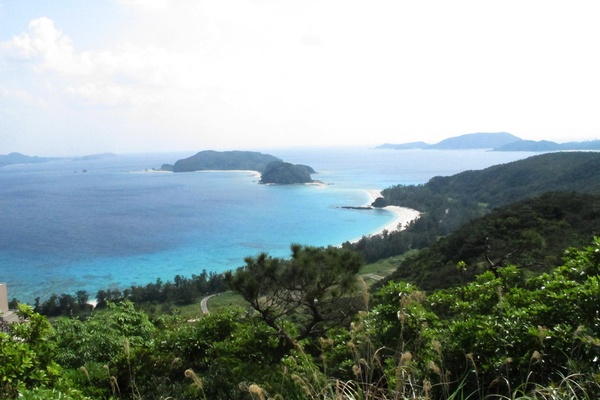 Back on land, it was time to take in the island and the many spectacular vistas. (The breathtaking views are one of the main draws here.) My favorite was above Furuzamami Beach, where we snapped spectacular photos of the waters, a blend of turquoises and blues, and of islands sinking into the distant horizons.

From that elevated viewpoint, I saw a spectacular range of beaches stretching into beautiful infinity, and quickly identified the secluded area where I wanted to spend the following morning. My friend and I continued on the road that wraps around the island connecting the different beaches and stopped when we met an English group drinking wine as the sun set.

We had an eclectic dinner of traditional Japanese sushi and modern interpretations of melted cheese dishes at La Toque, the hotel's restaurant, then went to the local school to join the islanders preparing for the Whale Watching Festival.

Okinawan culture is alive and kicking here. Literally: Okinawa is famous for its drumming. A group practiced their drum routine, banging on large barrel-like drums attached to ropes stretched around their necks, chanting like Samurais, making symbolic punches into the air with their arms and legs. 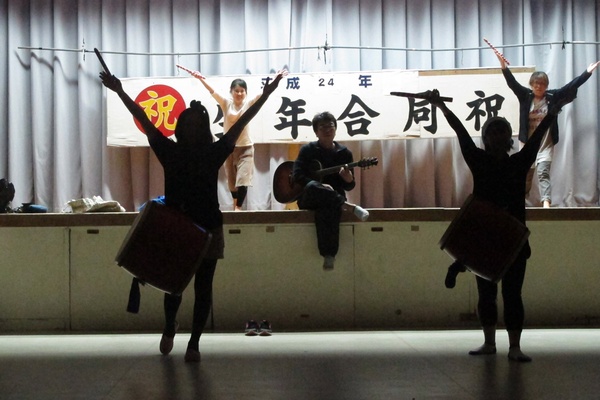 The traditional Okinawan obon festival drum dancing is called eisa. The performers dance and drum simultaneously to an exciting blend of traditional and contemporary Okinawan and Japanese music, using several different drums, including the odaiko (a big drum held in front of the body by long pieces of purple cloth over the shoulder and back), the shime-daiko (a hand-held, flat, two-sided drum), and the paranku (a hand-held, flat, one-sided drum).

Next door, a group of older women dressed in kimonos practiced traditional Japanese dance to the sad sounds of folk songs about islanders long gone. They made subtle movements and took nimble steps, creating delicate gestures with their hands and making a delicate play with umbrellas, cocking their heads to one side, moving from one corner to another, like a shoal of fish floating through the water.

In search of a midnight snack, we wandered to the local store and came away with a bag of Zamami junk food. Down by the harbor, we sat under the stars and nibbled on peanuts in brown sugar and purple potato chips before heading back to our hotel and lights out. A storm was coming. 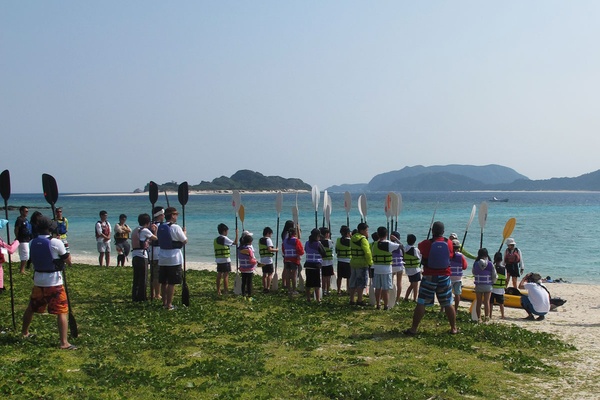 We went back to La Toque for a Japanese breakfast of eggs, rice, fish, and salad, then went exploring. I trekked up a steep hill and through dense foliage and found myself on an amazing beach all to myself. Nearby were many white sand beached filled with small alcoves. I found a deck and restaurant where you can hire kayaks and sun beds. I saw children paddling in a small pool between two empty beaches. I spent the morning swimming in warm crystal waters before lunching with the local school teacher, the only native English speaker on the island.

The following day, the wild weather made our plans of a whale watching trip and kayaking to visit the goats impossible, so we went hiking instead. We came to a beach where children were learning the basics of sailing. Brightly colored kayaks were piled up on the beach as ferocious winds blew through the white sands.

We continued on our hike, taking in the greenery and winding roads leading to smaller villages, then emptiness and peace and quiet. We passed a statue for a local dog, a hero in these parts for having reportedly swum the oceans to be reunited with his loved one. 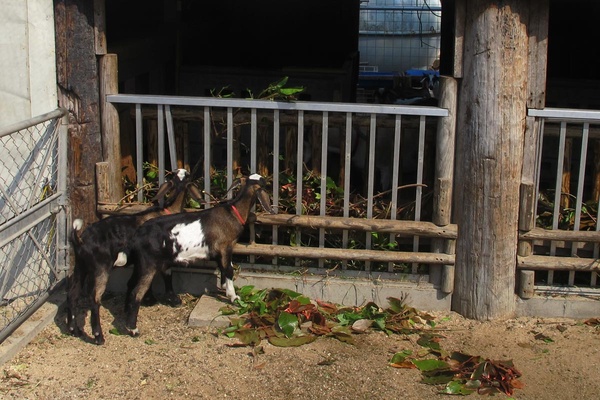 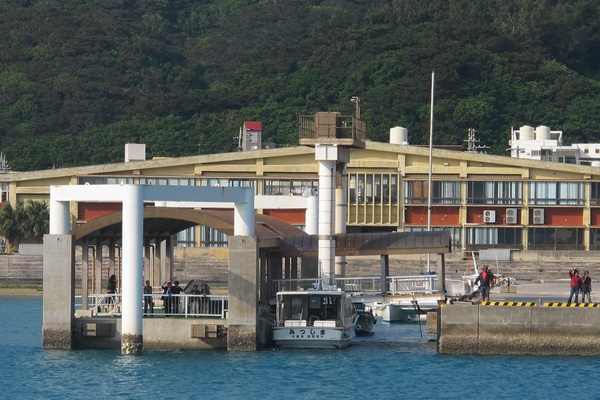 Back in the main town, we stopped at a small cafe for homemade bento boxes with fine slices of salmon and rice and handmade doughnuts, which went well with the hot tea in little bottles we purchased from a vending machine.

We had lunch on a bench near the dive shop, people watching and taking in the slow pace of village life, then wandered the dive shops where surfer types were sorting berries in a large net and boiling pots of tea.

Our stay in paradise was finished. It was time to take the slow boat back to Naha on the mainland. Naha was heavily bombed during World War II and strip malls and modern concrete houses abound between diminutive Japanese buildings and cute taxis buzzing through busy streets.

Two thirds of the island is still covered in American bases. and Mihama American Village, a huge entertainment and shopping area located inland, is a further reminder of the American presence on the island.

One of the main tourist attractions is Shurijo Castle, former seat of the Ryukyu Kingdom. One can walk around the castle, which was reconstructed in the 1990s, wandering its old stone walls, enjoying fabulous views over the city, and touring the main residence where a small cafe serves pastries served in the Ryukyu era. 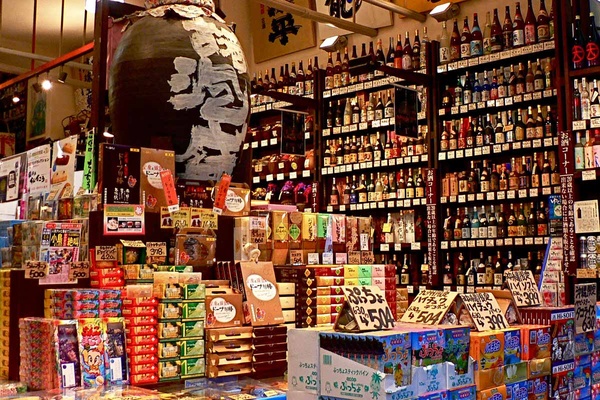 In the food section, we tried some of the nourishing local ingredients that Okinawa is so famous for. This includes a type of bitter gourd, which is turned into a bitter green drink thought to be good for the skin. Locals perch on a low-level round table at a corner stand just inside the main entrance drinking the refreshing juice.

Nearby, a local lady sells homemade sweet and subtle rice cakes in several flavors made with local ingredients such as the herb mugwort. We saw other stands selling another health-conscious desert, aged tofu served with a syrup-like sauce that's flavorful but not sweet, and dried fruits like mango, pineapple, and peach, delicately packaged in 100-yen bags.

The fish market is a rainbow of beautiful translucent skins, silvery shimmering shades of blues, oranges, pinks, and yellows. Upstairs is a no-frills selection of restaurants crammed side by side under strip lighting where you can eat some of the freshest food in town: fried fish, sauteed broccoli, incredibly fresh sashimi, and seafood of every shape and size served by waiters in T-shirts.

We sat at one of the plastic tables and had a bountiful meal of different seafood dishes and the local seaweed that looks like a lace necklace found by divers at the depths of the ocean and amara, the local sake.

Just behind the market is the cool art house cinema Sakura Zaka, which shows Japanese and foreign-language films. The side streets leading off from Kokusai Dori are a lively and young scene filled with izakayas, Japanese drinking haunts that serve tapas-style bites. 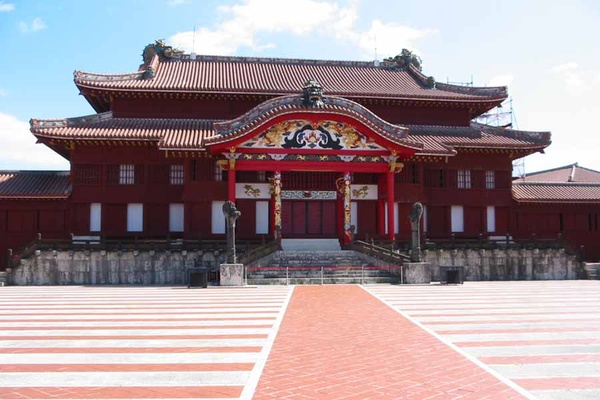 Okinawa is famous for having the highest number of centenarians on earth, and the majority of them live in the northern village Ogimi. If you want to taste what longevity tastes like, you should head to the small restaurant Eminomise for the simple, traditional, healthy menu prepared by Emi-San, a grandmother who is the closest equivalent to a celebrity chef in these parts. She cooks with vegetables that local elders grow for her fabled restaurant, which is a cornerstone of the community. Hard working, energetic grandmothers gather here every day. It seems that working is good for you after all.