A Caribbean island offering the quintessential mellow beach experience. A girl on the lookout for everything else. Fathom editorial director Jeralyn Gerba explores beyond the beach towel.

VIEQUES, Puerto Rico – I love to relax. I really do. But if relaxation was butter, then, in the words of celebrity cook Paula Deen, my dollop might look a little different than your dollop. Send me to an unspoiled island with beaches and blue water and nothing to do for days on end, and I will spend my vacation trying to prove otherwise. The little island of Vieques, off the coast of Puerto Rico, posed a bit of a challenge: The place is known for being one of the quietest and mellowest beach spots in all the Caribbean. And my husband and I were there in the off season. With a cloudy forecast. In the middle of the week. Itching for action.

So we dug around, harangued the concierge, talked to locals, drove in circles, went off paved roads, paddled, peddled, stayed up late, woke up early, and ate everything in site. Here's what we discovered.

From top left: Tin Box salad from the garden; the arepa kitchen; our trusty Jeep; an arepa cut crosswise; Mosquito Pier; chatting with a local at a food truck stop.

What's everyone snacking on? We poked our heads into the orange house with a sign for fresh baked arepas (off Route 200), and walked away with large, dense loaves of bread stuffed with guayaba and queso, the likes of which I have never seen before. Note: Warming it up in the oven takes it to another level.

There's a small movement toward growing produce, and the local arugula (which appeared on a few menus) makes me really excited. The restaurant Tin Box grows their own in a large backyard garden and serves heaps of it on a plate with fresh queso. The best preparation can be found at Sorcé, the W Resort & Spa's restaurant, wherein the greens are served with marinated habichuelas. Crazy delicious. I'll be thinking of that salad for a long time. Fresh and peppery, it seems like the right thing to be consuming in 90-degree weather. Along with a piña colada, of course.

Seeing as we're on an island, there are many opportunities to pull off on the side of the road and throw down a blanket. There are black sand beaches, coral beaches, hotel beaches, rocky piers, and bays. You can try them all, as I did, or you can hold out for the softest white sand beach you can find. After tromping through mangrove swamps and hitting various dead ends at the eastern tip of the island, we made our way south and landed at Media Luna. Jackpot. The sand is baby-fine, what I imagine it would feel like to walk on a cloud. We pulled our Jeep right up to the beach and made camp under the shade of trees. The water is almost a pastel turquoise; underwater, the sand feels like clay. It's a not too quiet, not too crowded, mostly local spot.

They are rentable. And we did rent one, thinking it would be a great way to see the relatively small island. That joy ride lasted about an hour because although there are few roads, there are lots of cars with little regard for pedaling enthusiasts. We felt (looked?!) like dumb tourists. We traded in the bicycle for a Jeep. Even the lady who rented them to us agreed it was a better idea.

Okay, enough about the Bio Bay! That's what I kept saying to myself, as it was the only thing people recommended we do on the island. Now I see why. Mosquito Bay is possibly the most luminous bay anywhere on Earth. The shape of the waterway keeps the concentration of neon microorganisms very high, and as the hour grows later and the sky grows blacker, the water takes on a supernatural quality.

Go by kayak. I've done the boat before — in the bio bays of Puerto Rico — but there's nothing like silently paddling on top of the water, watching sparks fly with each dip of the paddle, like currents on an electric grid. We went on a group excursion with 14 kayaks and a rowdy guide (and that's during low season), but it's possible to arrange a private tour. I think it would be much more poetic that way.

Do take a few minutes to take in the grandeur of the Ceiba tree, a 400-year-old deciduous with an incredible root system and remarkable survival tactics. It's no wonder that the native Taino people (along with the Mayans and several African tribes) believed that the Ceiba connects the terrestrial world to the spirit-world above. It looks exactly as I imagined the Tree of Knowledge would. It feels like you are in the presence of something very special.

These nine-passenger commuter planes zip back and forth between the Caribbean islands and are a real delight. The pilots are incredibly cool, calm, and collected. The flight from San Juan to Vieques takes less than 20 minutes. The flight path is only about 200 feet up in the air, so you get a great lay of the land. It's a nice little rush.

I could not get enough of these gorgeous trees. They have fern-like leaves and a "flamboyant" display of red flowers. It's a welcome pop of color on an otherwise green and beige island.

We checked out just about every roadside stand that was open (we found that they don't stick to normal operating hours during the week). Fare was simple, meaty, often fried, and served in styrofoam. The best ones had their own special charm, like Kiosk Tainos, across from the popular Sol Food truck, where they make pork chops and yucca and tostones, as well as mango frappes with vanilla, cinnamon, and coconut milk. The local dish, mofongo, was pretty tasty and cheap at O+J, a truck tucked into a dilapidated gas station at the cross section of Route 997 and Route 200. 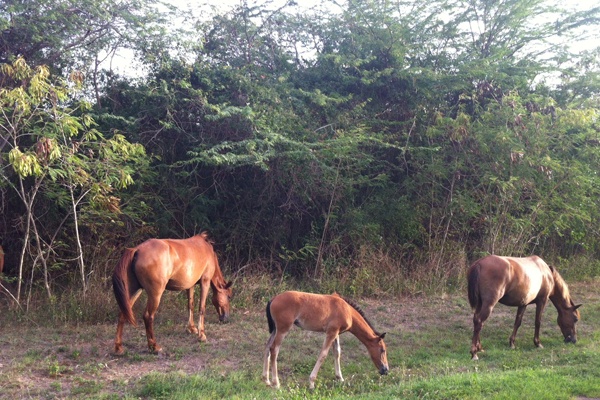 There are horses everywhere: Hanging out on the side of the road, taking romantic walks down the beach, eating garbage in front of restaurants. They're mostly branded and belong to locals, who let them roam because it's too expensive to stable and feed them. But there are feral horses, too, in the wildlife refuges, and young boys make it their pastime to capture and break them and keep them as their own. They parade their newly domesticated mares down the street like hot rods.

There are simple B&Bs, apartment rentals through sites like FlipKey, and the modernist and off-the-grid Hix Island House.

But when it comes to full-service hotels, W Resort & Spa is the big game in town, and can be credited with putting Vieques on the map as a traveler destination. It might seem too shiny and design-focused for the rest of the island, but after a long day touring around, it was a nice place for us East Coast snobs to come home to. There are some boutiquey hotel trends you'll recognize — like refering to the pool area and gym as "Wet" and "Sweat"; the frozen drinks are slamming; the staff is kind. Our room had a balcony that overlooked the ocean, and I kept the sliding doors open for the entire trip. (There's nothing like a Caribbean sunrise to pull you out of 350-thread-count sheets.) Besides twin pools that lit up at night (an homage to the Bio Bay?), and bohemian lounging pods in the breezy Living Room (a.k.a. lobby), I really got down with the fire pit, where anyone on the island can enjoy a NYC-priced cocktail and nighttime breeze.

Through the mangrove swamp.

If you drive to the western edge of the island, you can take a short wooden foot bridge through the mangrove swamp, which abruptly ends with a keyhole cutout into Kiani Lagoon. There's not much to it, but it's a neat five-minute walk through a grove of wild tree creatures.

This is a little-touted site, but one of the coolest things on the island. A clearing of trees and subtropical brush give way to a group of boulders, with smaller rocks radiating from the center. How they got there is a big mystery. But when they excavated the site, they discoverd a human skeleton dating back to 1900 BC.

On the western tip, Puntas Arenas, Green Beach, is good for snorkeling.You can see tiny sea urchins close to shore.The left side of the mile-long Mosquito Pier is also good for snorkeling (but not so nice for promenading). For scuba, everyone says the best thing to do is to charter a boat to take you to the otherwise unattainable beaches on the eastern side of the island: Cayo Alcatraz, Cayo Conejo, and Salina del Sur.

The name of the natives on Vieques from 1000 AD until the 15th century, when they were decimated by the Spanish. They put up a good fight, though, and it kept the Spanish from colonizing the island for a few hundred years. In the interim, it became a respite for pirates and outlaws.

One of the crazier bits of island history: The United States Navy used Vieques as a "Live Impact Area," where explosive and non-explosive ordnance was used. When the navy departed in 2003, the land — about two-thirds of the island on the east and west sides — became a national wildlife refuge. Some beaches post warnings to keep away from any possibly undetonated warheads you may find while frolicking in the sand. An unlikely occurrence, but a bizarre piece of trivia nonetheless.