Editor Stan Parish, whose debut novel Down the Shore we've excerpted, lives in Manhattan but grew up (mostly) in Princeton, New Jersey. Because he currently spends more time in Central Jersey than he does in his apartment, Stan's the ideal guide to the preppie capital of the guido (sorry, the garden) state. 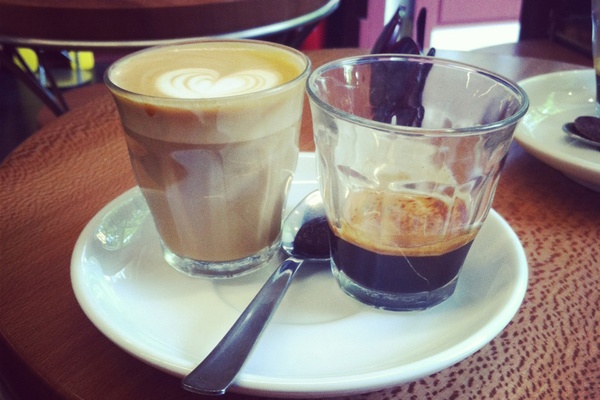 Whenever I find myself commuting to New York from Princeton, I wake up twenty minutes early to get coffee at Rojo's (33 Palmer Sq. West; +1-609-924-7600). This is not about nostalgia — the Princeton location opened in 2013. It's because their breve cappuccino is as good as anything in New York.

New Jersey delis are serious about their breakfast sandwiches, and Olives (22 Witherspoon St.; +1-609-921-1569) is no exception. Go for broke: sausage, egg, and cheese with avocado and a heavy dose of the off-menu green hot sauce whipped up daily by one of the cooks.

I am not alone in thinking that The Little Chef Pastry Shop (8 S. Tulane St.; +1-609-924-5335) makes some of the best croissants in America. The Little Chef himself is unfailingly rude and unpleasant. You'll get over it. He was over you before you walked in. 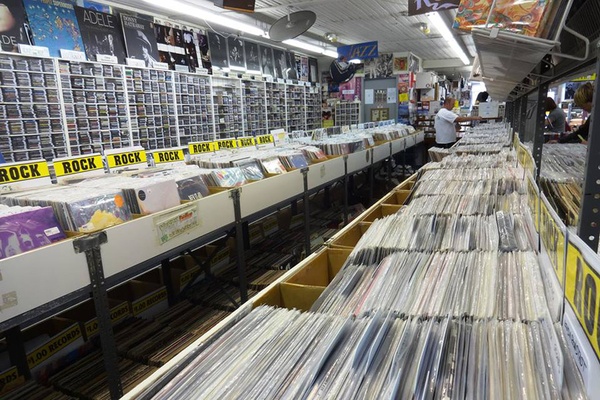 A DOSE OF CULTURE

They have one of the best fiction sections I've seen at Labyrinth Books (122 Nassau St.; +1-609-497-1600), along with titles like Edge-Based Clausal Syntax which make you feel smarter after reading the jacket. And there's almost always a bargain table with overstocked classics marked down to a few bucks.

If you have any interest in vinyl, you already know about Princeton Record Exchange (20 S. Tulane St; +1-609-921-0881). If you have an interest in becoming someone who knows about vinyl, this is a good place to start.

The campus is lousy with good outdoor sculptures, but my favorite piece is on Einstein's old stomping grounds at the Institute for Advanced Study. "New Piece" by Tony Smith was made famous by the worst band in the world, who used to get stoned and write "songs" here. They're long gone, thank Christ, and this is a good place to peacefully protest the fact Chris Christie refuses to legalize weed in NJ. 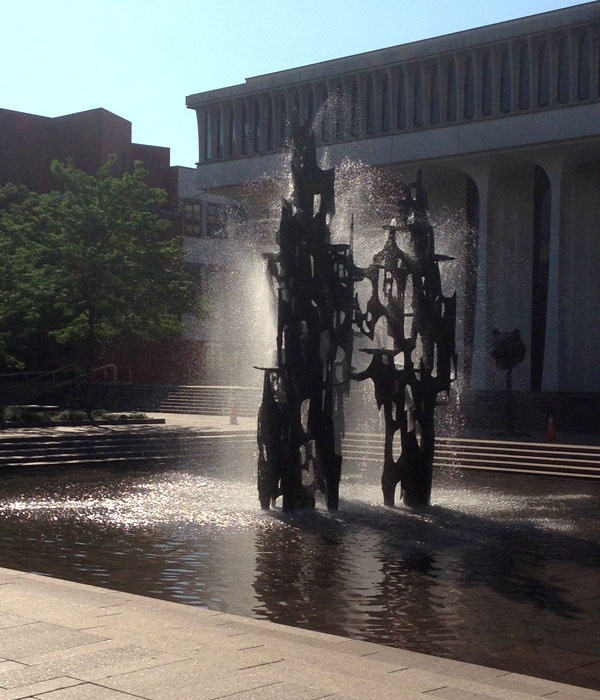 Fountain of Freedom by James Fitzgerald in the fountain in front of the Woodrow Wilson School on campus. Photo: James Smits

The style of rich white people is fantastic — when deconstructed and worn one piece at a time. Greene Street Consignment (162 Nassau St.; +1-609-924-1997) is the place to find a tux that's only seen three charity auctions, or last season's barely used bags. I am still sweating the cashmere camel overcoat my brother picked up for $100. 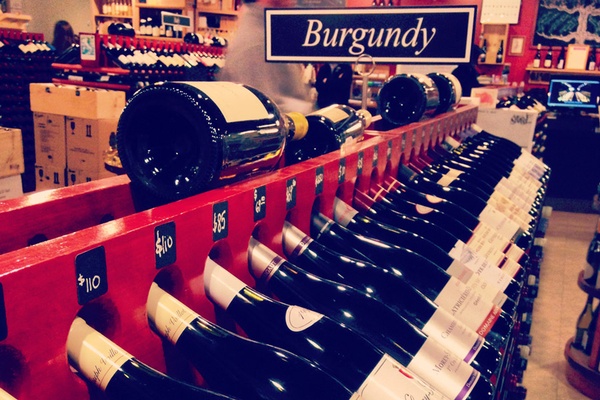 CoolVines (21 Spring St.; +1-609-924-0039) is the kind of liquor store that every small town dreams of — a place where you could drown in distinctive wines, craft beer, and damn near every great liquor being distilled today.

Down the street at The Princeton Corkscrew (49 Hulfish St.; +1-609-430-1200), the staff — either practiced spitters or high-functioning alcoholics — seem to have tried every bottle in the store and are happy to steer you smack into a bargain Burgundy from a producer you've never heard of for under $25.

Why two liquor store suggestions? Because the single advantage of New Jersey's arcane bullshit liquor laws is that you can bring your own amazing wines to restaurants like Mistral (66 Witherspoon St.; +1-609-688-8808). Chef de cuisine Ben Nerenhausen was poached from the three Michelin-starred Meadowood in Napa, and he's doing amazing stuff with the bounty of the Garden State. The plates are small, so order two fried oyster salads and save yourself some time. And do not skip the grilled cheese with hay-smoked ice cream. 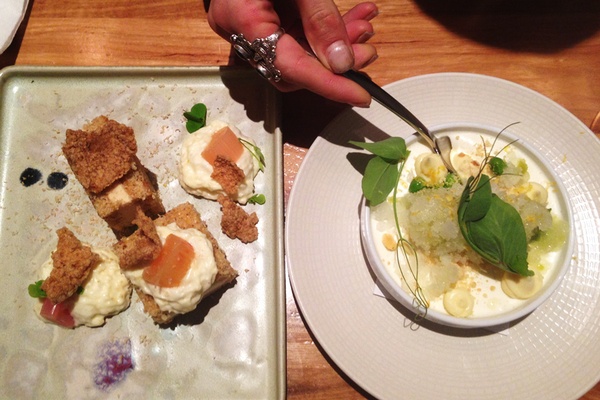 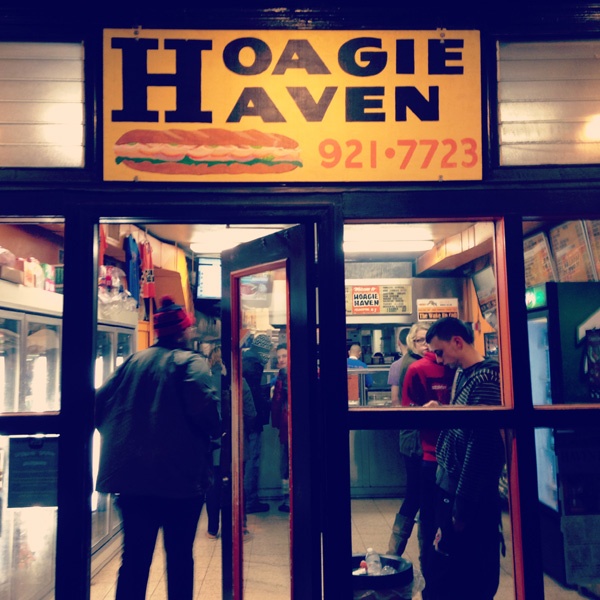 Princeton ain't exactly a nightlife destination, and its best bartender, Jamie Dodge, is currently without a bar. There's a rumor that he'll be making drinks at a temporary bar inside Mistral come August, and if that works out, it's worth a trip to Princeton for his drinks alone. The bar at Agricola (11 Witherspoon St.; +1-609-921-2798) is a solid fallback plan. And while the live music at Triumph Brewing Company (138 Nassau St.; +1-609-924-7855) is generally terrible, it's worth it for the house-brewed Bengal Gold IPA.

And while I'm not sure I've even eaten here sober, there is nothing like a buffalo chicken cheese steak from Hoagie Haven (242 Nassau St.; +1-609-921-7723) right after last call. This palace is arguably more famous than the University across the street.

Train: New Jersey Transit trains on the Northeast Corridor line stop at Princeton Junction at least once an hour and connect to Newark and New York City's Penn Station. If taking Amtrak from other cities, connect at Trenton or Metropark for the NJTransit train. From Princeton Junction, a tiny train (known to locals as "The Dinky") runs to the Princeton station, which is located a short walk or even shorter taxi ride to town.

Car: Princeton is easily accessible from Exit 8A on the New Jersey Turnpike. Yes, it's Jersey, and sooner or later everything comes back to the Turnpike. Driving distance from New York is a little over an hour, and about the same from Philadelphia.

Stan Parish's Debut Novel Down the Shore (excerpt)
Where to Go from NYC: Atlantic City
Don't Ruin My Quiet Beach on the Jersey Shore