London-based contributor Kerry Saretsky let her Type-A tendancies go and left the honeymoon planning to her fiancé, who delivered an amazing two-week road trip around the Sicilian countryside and the Aeolian Islands. Here's the breakdown.

SICILY – We had always figured we would go somewhere otherworldly and exotic for our honeymoon. Somewhere neither of us had ever been before. And considering how much we've traveled over our combined 60 years, that would have meant Mars. Or Japan.

But when it came down to it, we decided that we wanted to save our time and money and skip the three-legged business class flights that are synonymous with honeymoon to do a road trip somewhere nearby, just us and a trunk full of bathing suits and Panama hats. Because we live in London, somewhere nearby included Sicily.

Chris had been there before, but I hadn't. In fact, the very first picture we have of him is as a baby in his father's arms, Mt. Etna in the background. As a type A fiancée (and not to mention, an avid traveler), I couldn't imagine handing over the planning of such an important event to my beloved. But since I'd already felt that way about the wedding, I found myself with little bandwidth to argue.

And it just goes to show that after six years, a husband-to-be can still be full of surprises. He works as a consultant, which may explain why he presented me with a Power Point slide of our romantic getaway. A quick Google search told me that he'd found  the perfect combination of big-hotel glamour and agri-touristic hideaways. Having since been on the trip, I can confirm that a two-week drive around Sicily is the best way to get away, be somewhere beautiful, experience history and food and blue skies and waters without having to take yourself too seriously. It had that about-to-be discovered feel to it. And we — especially he — got to feel very smug about the fabulousness of it all.

Here's everything you need to know for two weeks in Sicily. Andiamo.

Palermo is the capital of Sicily, but we spend most of our time at Grand Hotel Villa Igiea. It's a big hotel, the kind that has multiple restaurants and pools and walks. In other words, you never have to leave. It even has its own ancient little ruin by the pool, and the whole place has that feel of crumbling glamour. The breakfast is a smorgasbord, but I recommend you head straight for the almond and orange granitas. Take your meals outside, overlooking the water, under the blossoming trees. The perfect start. 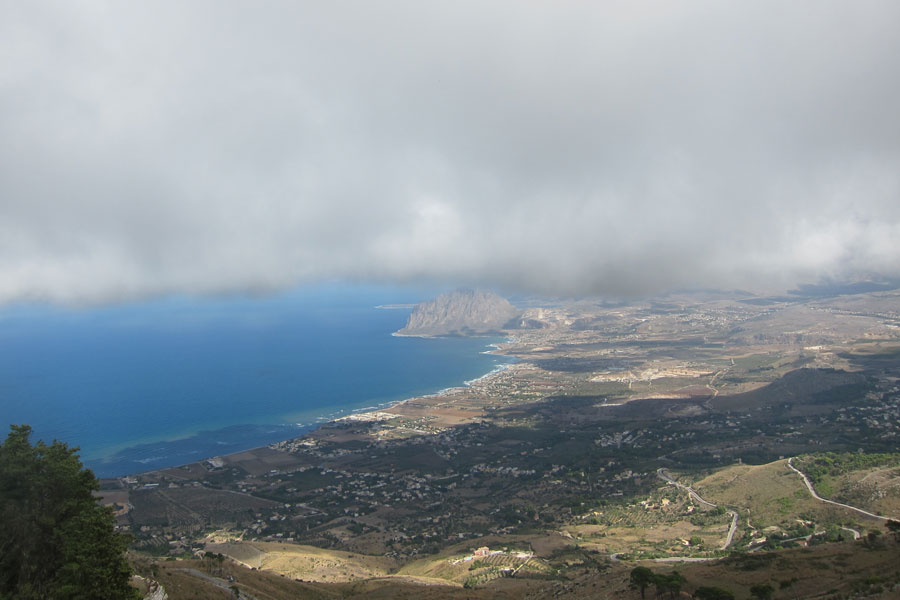 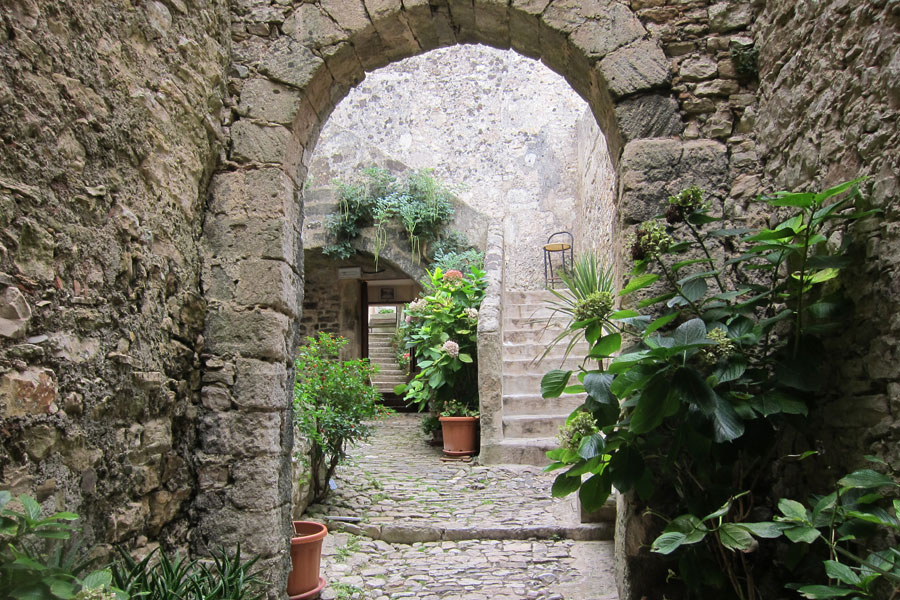 Around the ancient town of Erice.

We drive through the ancient, mountainside town of Erice on our way from Palermo to Agrigento. It's famous for its almond paste cookies and marzipan, and those at Pasticceria Grammatico are a cavity-causing must if you pass this way. We have lunch at Monte San Giuliano. The swordfish pasta is excellent, and the famed seafood couscous of the region is too tempting. 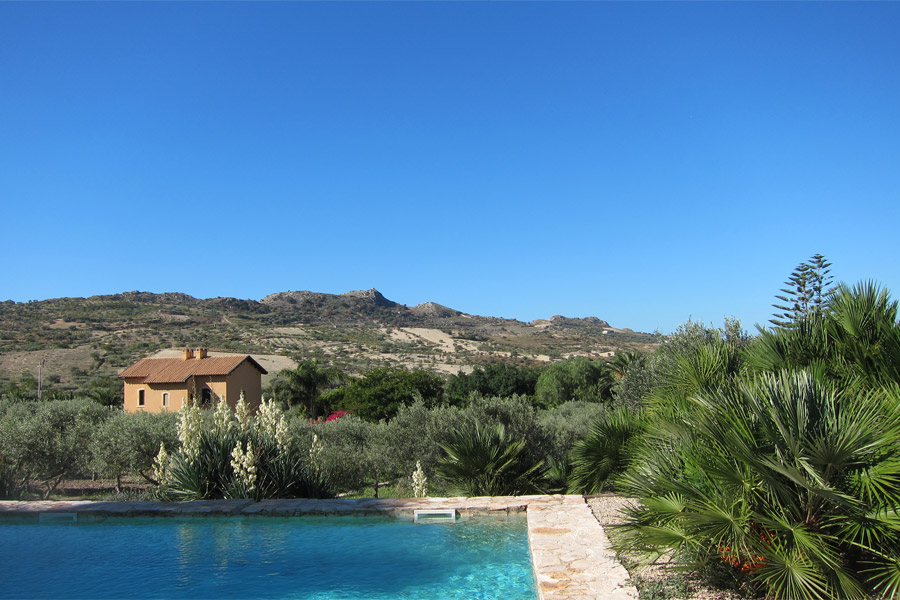 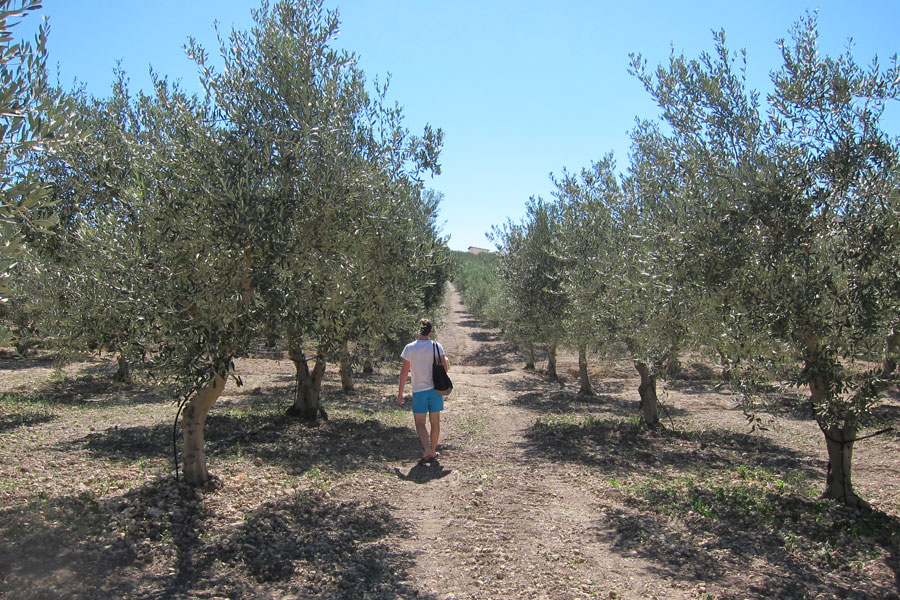 The pool and olive trees at Hotel Mandranova. 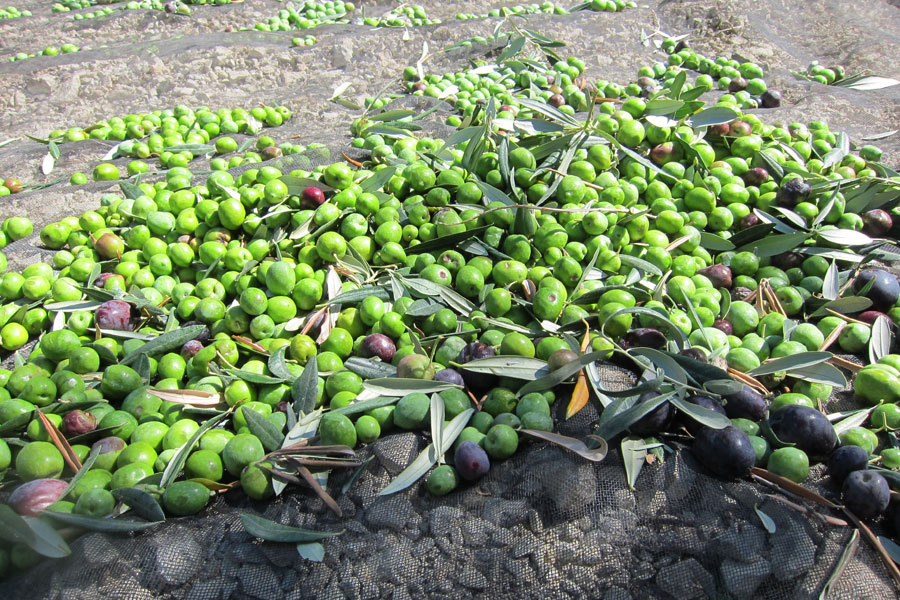 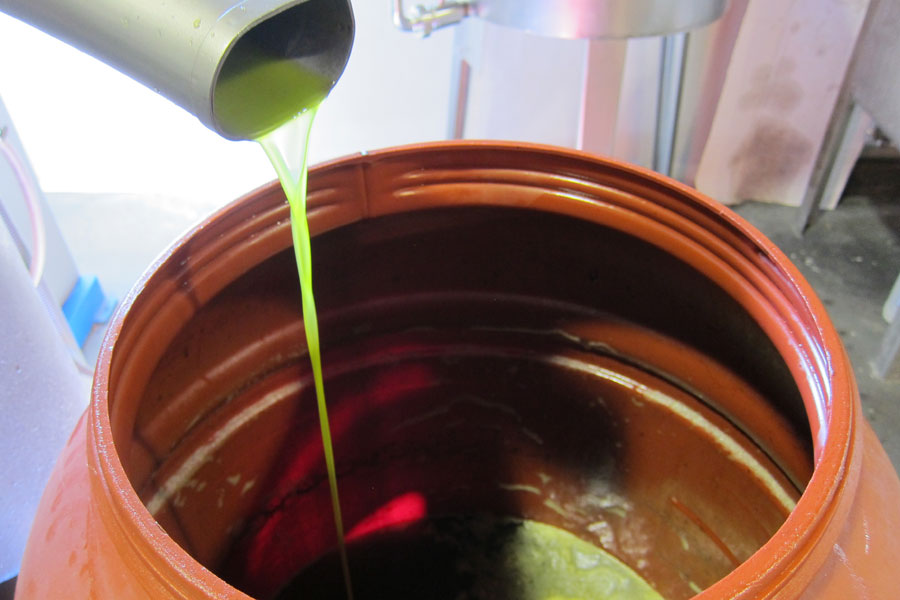 Making olive oil, before and after.

We arrive late afternoon at one of my favorite hotels, hands down, anywhere: Hotel Mandranova. A working olive oil farm, it's a giant grove of gray-leaved, green- and black-fruited trees. The stone pool is in the middle of the grove, and if you come around October, as we did, you can watch the harvest. The lovely couple who own the hotel will show you how they press different olives into fruity, almost spicy, thick oils, which are served at other fine hotels around the island. An olive oil tasting involves drinking shots of the stuff, not dipping bowls and bread. They take oil seriously here. The rooms have a monastic but stylish simplicity. Dinner is a communal affair, and you'll leave happy after seconds of home-style cooking. The pasta shells with chickpeas and rosemary is a favorite that we've been evangelizing on both sides of the Atlantic. 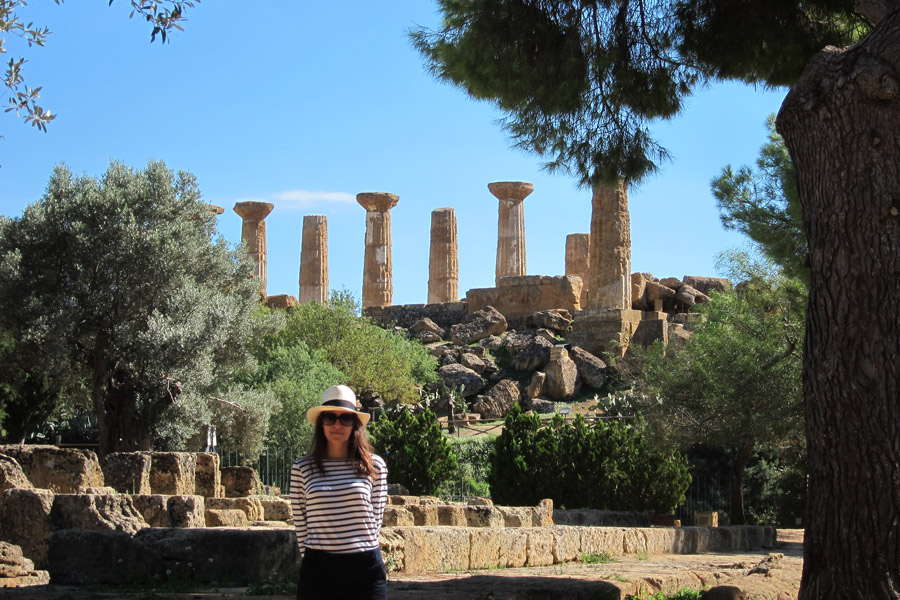 Kerry at the Greek ruins of Agrigento. 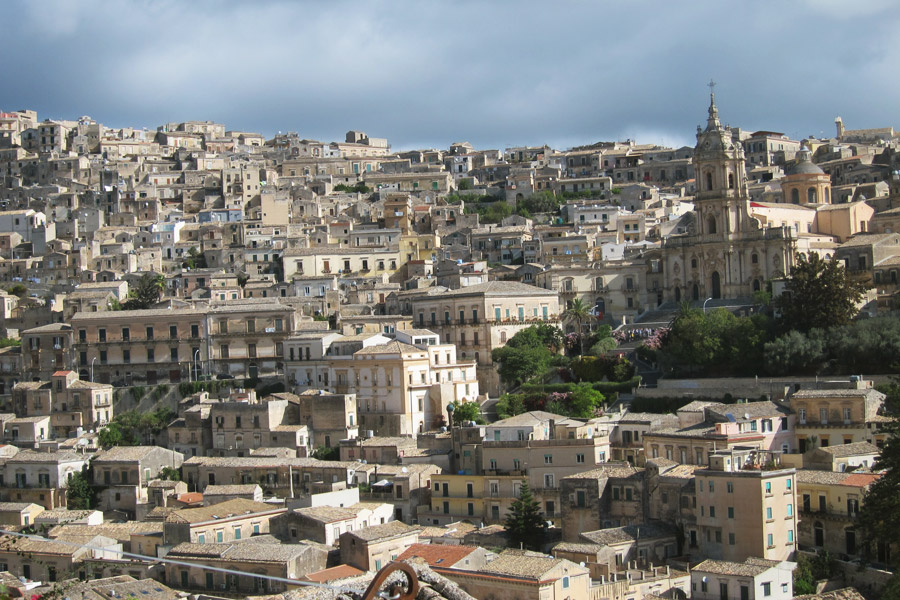 The baroque town of Modica.

We visit the grand Greek ruins of Agrigento on a sunny day, early, before the crowds arrive. I've always been one for Greek myths, and standing, staring at the temples felt less like history and more like a study of something beautiful.

We continue on to the baroque town of Modica and stay at Casa Talia, a tiny hotel perched like a nest high above the city, which slopes down two cliff-like hills, facing each other, into a narrow valley that is the center street of Mordica. The old city was destroyed in an earthquake in 1693, at which time the city was rebuilt, so the whole town is chocolate-box Baroque. In fact, Modica is the center of Sicily's chocolate industry. There's nothing like sitting in the hotel's tiny jasmine grove, looking down over the pricks of city light at night. Special. 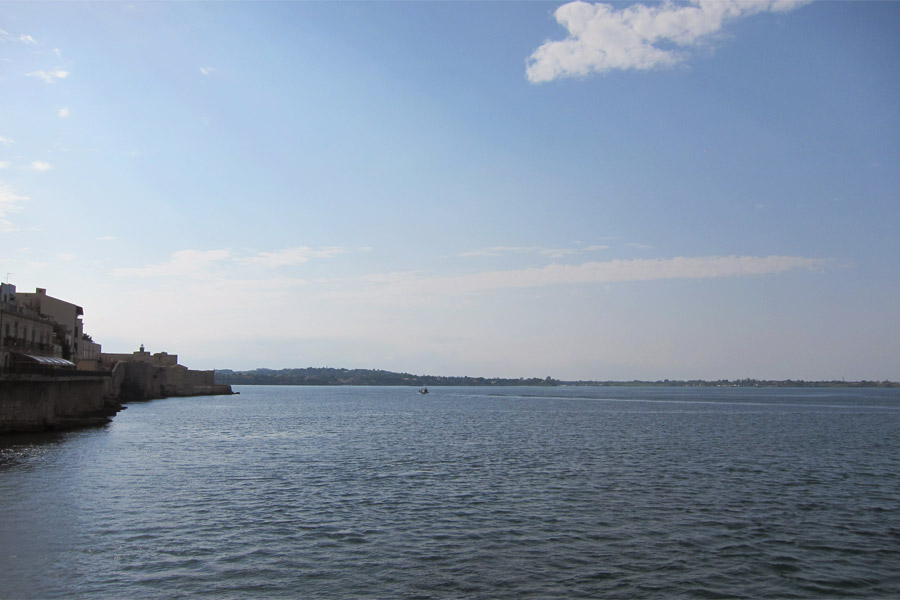 The view from Des Etrangers. 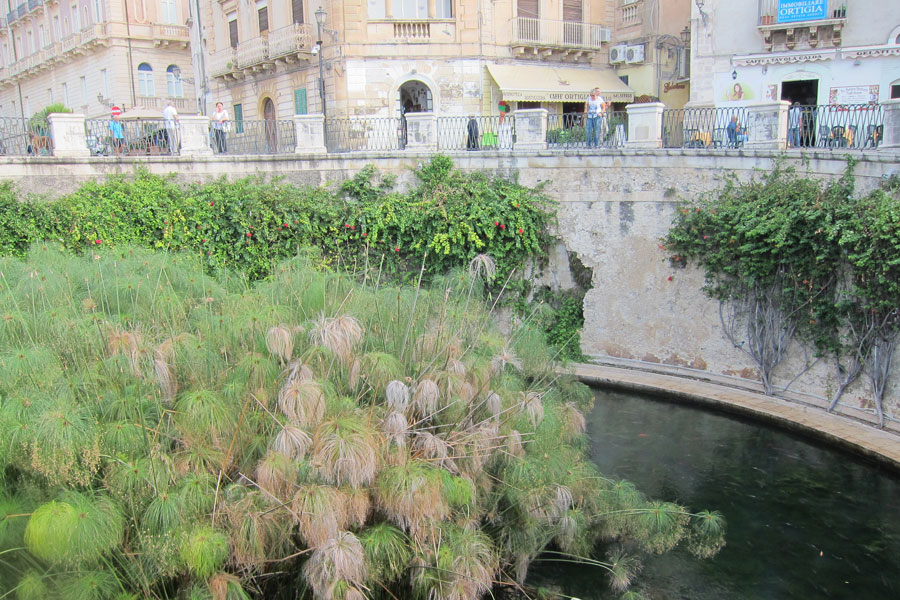 I loved Des Etrangers, another stately hotel with a Grecian-style fountain pool in the basement spa and views sweeping out over the seas. It's just steps from Fonte Aretusa, an ancient fountain of natural fresh water just steps from the salty sea. I get lost in Ortygia in daytime and at night. We love the twisting, ancient streets, and the points jutting out into the sea just scream Greek empire. We also love super casual Taverna Sveva (Piazza Federico di Svevia, 1; +39-09-31-24-663) for swordfish prepared a few ways and citrus tiramisu (for those like me who aren't coffee people.) 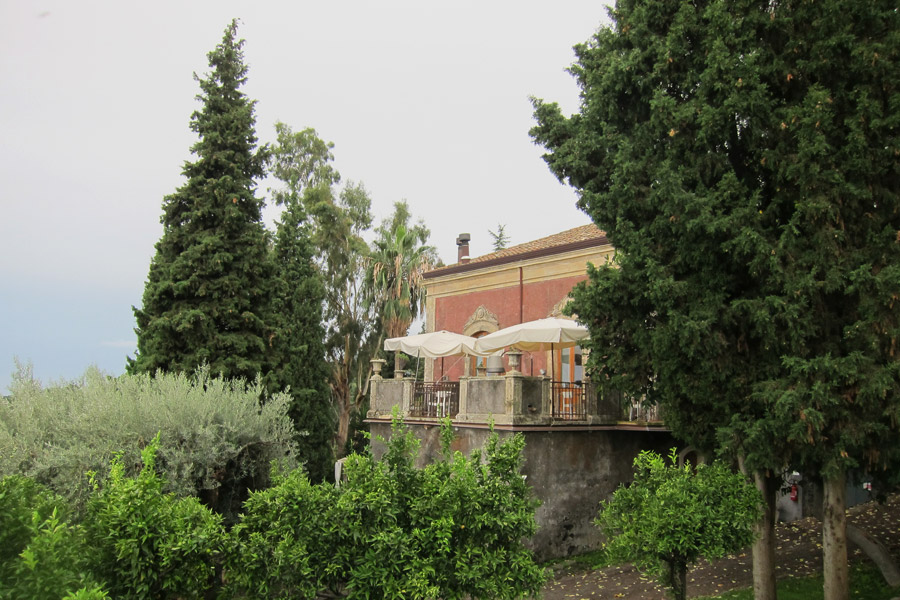 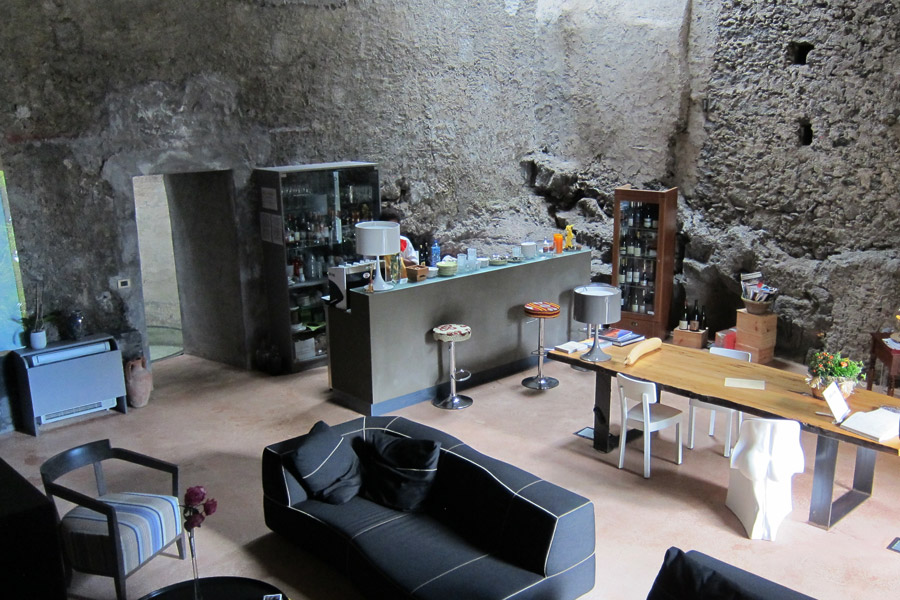 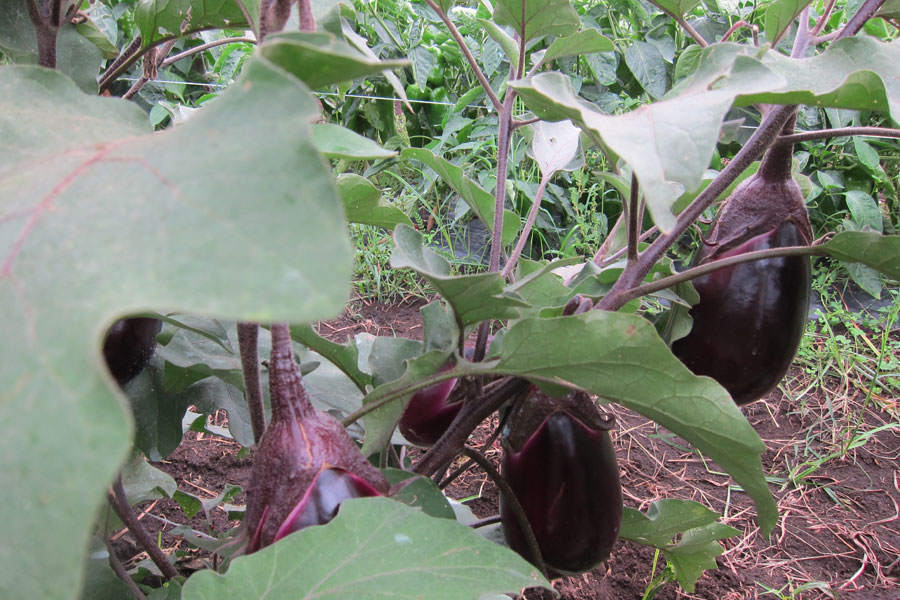 Vegetables in the garden. 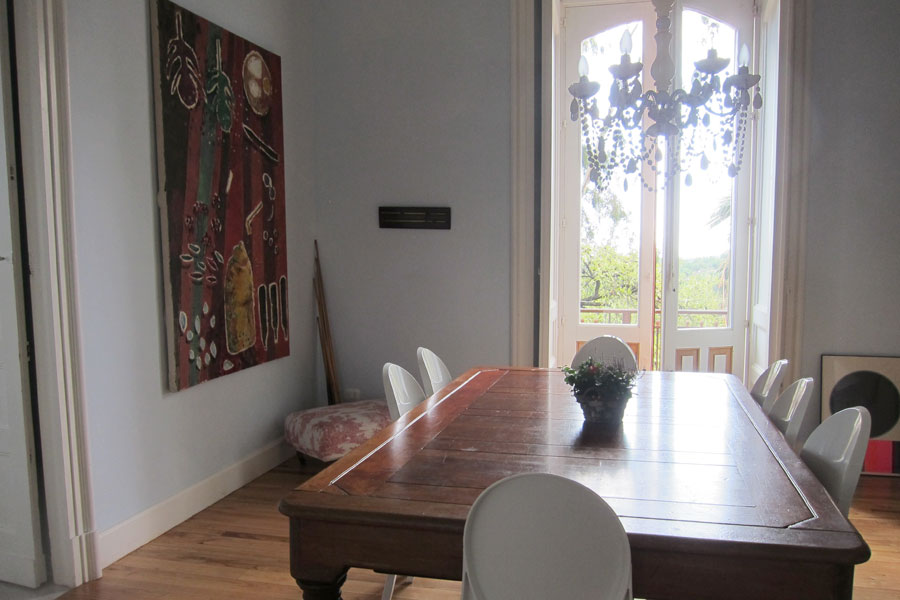 Dining room in the manor house.

We make our way to our favorite hotel of the trip, and possibly of all time: Monaci delle Terre Nere. With only a handful of rooms, the intimacy and service are unparalleled. The rooms of the converted wine press and manor house are stunningly simple, shaded by almond trees, and surrounded by groves of fruit trees and patches of vegetables in the black earth that gives the terraced paradise its name.

At night, the living room of the manor house is converted into a little restaurant where guests dine near each other on the fruit of the farm. Breakfast is served in the vat of the old stone wine press. The cocktail hour sees all guests mingling in the super-cool modern-meets-ancient reception area. Hike around the mountain. Sit around the olive-dappled pool. Stare off to the sea miles away. You won't want to leave.

Monaci and Mandranova are both absurdly fantastic, like living in chic little communes where everything looks and tastes perfect. 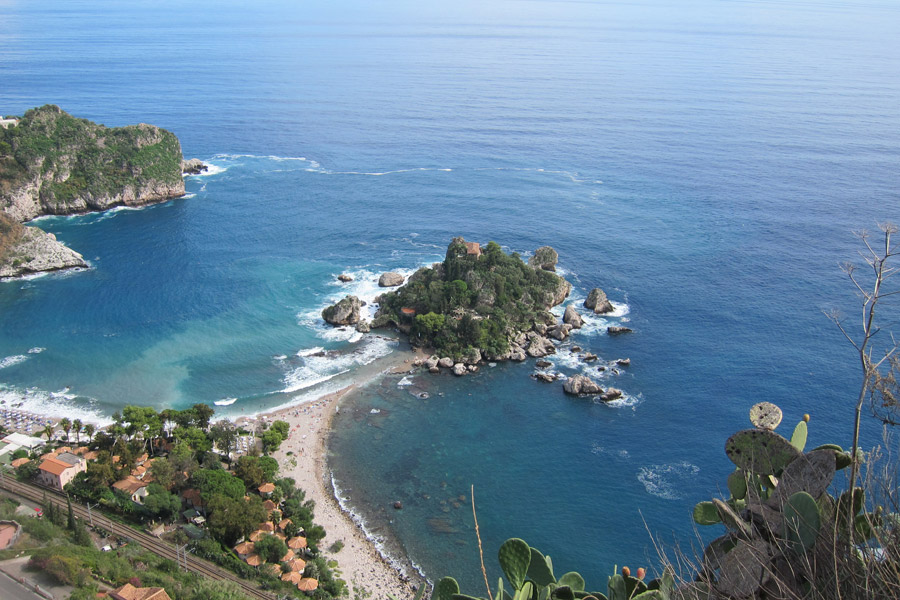 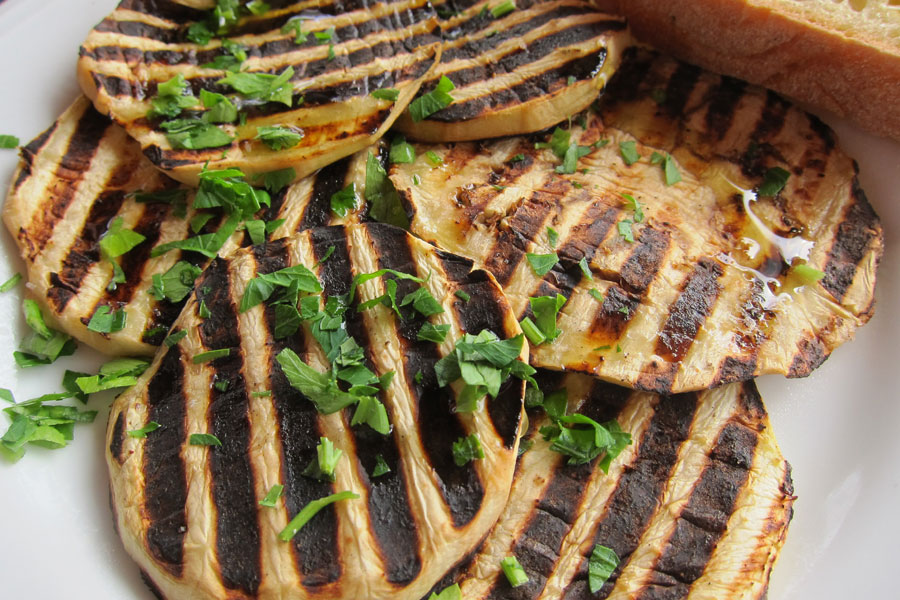 Back to the big Sicilian cities. Taormina is a darling one, renowned for its beaches and beautiful Isola Bella, a wild island where two inlets come together so shallowly that you can walk there. We perch at a lido and eat a granita by the sea. We check into Villa Carlotta, a sumptuous hotel with a stunning rooftop restaurant that serves a phenomenal breakfast. I cannot recommend the swordfish and wild fennel pasta at L'Arco dei Cappuccini (Via Dietro Cappuccini, 1; +39-09-42-24-893) enough — it was my favorite meal of the trip. It's not on the menu. You have to ask for it. Which somehow makes it taste even better. 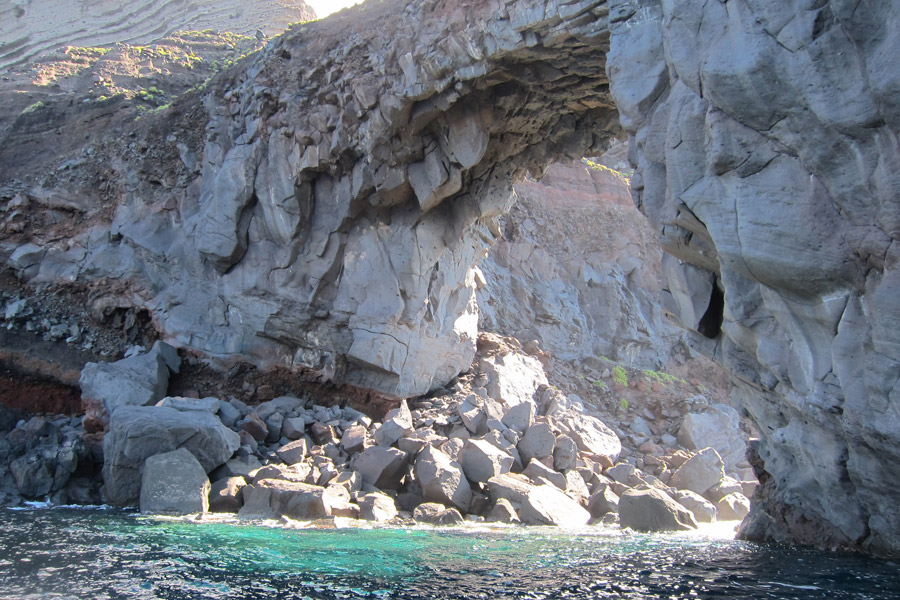 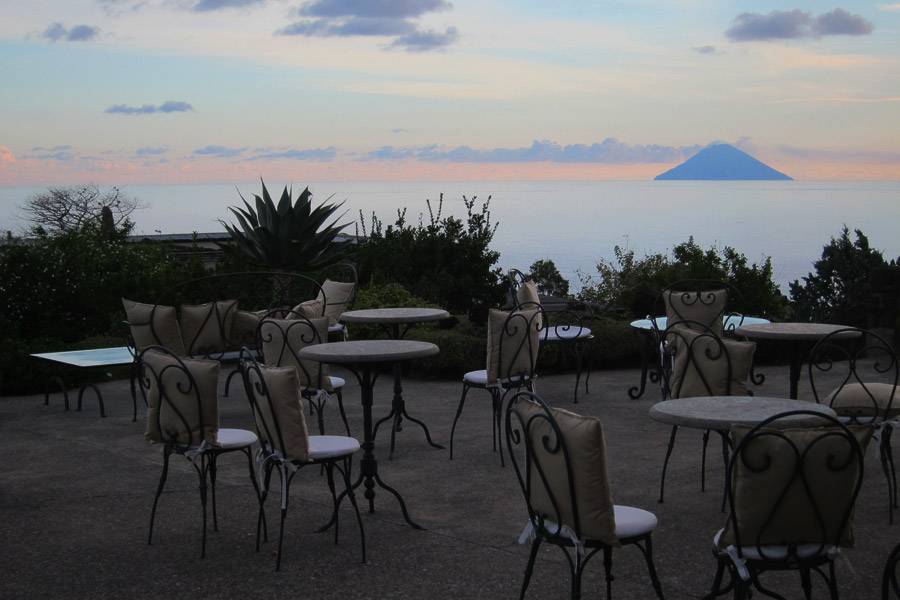 My only regret of the whole trip is that we didn't stay in Salina longer. Gorgeous and rustic, it's one of the wind-swept Aeolian islands a hydrofoil away from mainland Sicily. Hotel Signum is a stylish but unpretentious hideaway. We asked reception to book us a private boat tour of the island.

We swim in the clear waters and stare stupefied down 30 feet to the giant volcanic rocks that make up the ocean's depths. We smile up at the goats that scale the green mountainous island, navigating around gorgeous rock formations that jut impossibly into the whirl pooling waters. 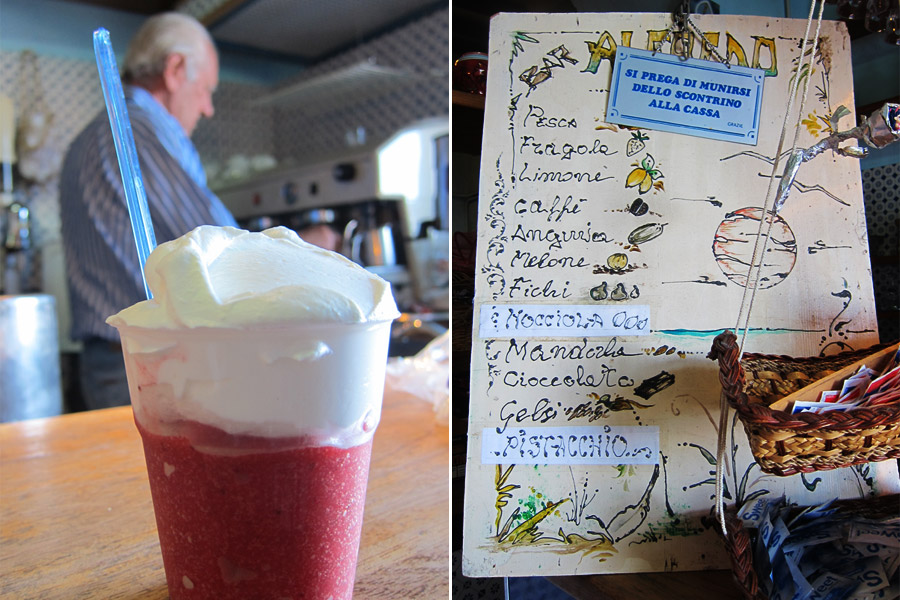 The reason for our excursion was to stop at Granite Da Alfredo (Via Marina Garibaldi, +39-09-09-843-307), a little coffee and granita shop run by the charming Alfredo. His granitas are so fresh, real, and homemade that the famous Sicilian lemon granita still has seeds intact. I also try almond, but the list of 14 flavors makes decision all but impossible. Salina is famous for its world-class capers, so of course we have to taste some. 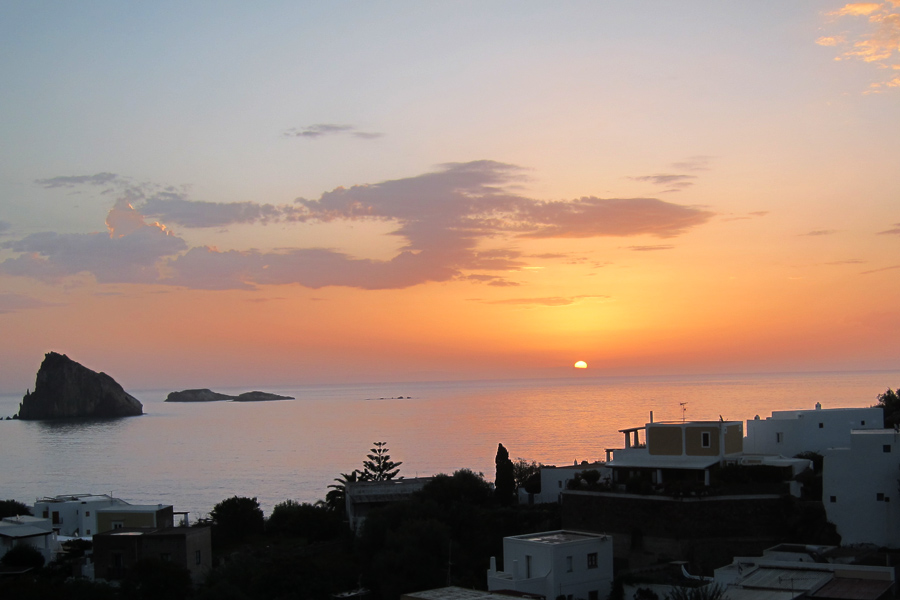 Panarea is considered the chicest of the Aeolian islands, but it's actually more of a small fishing village. We stay at the infamous Hotel Raya, known for its parties in the high season and its calm in the off-season. We stare off the terrace at the erupting Stromboli, and eat fresh fish with the hotel's owner. The hotel has four pools, natural volcanic springs at different temperatures and levels of filtration. We find a seat up at the hotel's high ground and watch shooting stars in the night. The island has no cars. Peace and quiet. 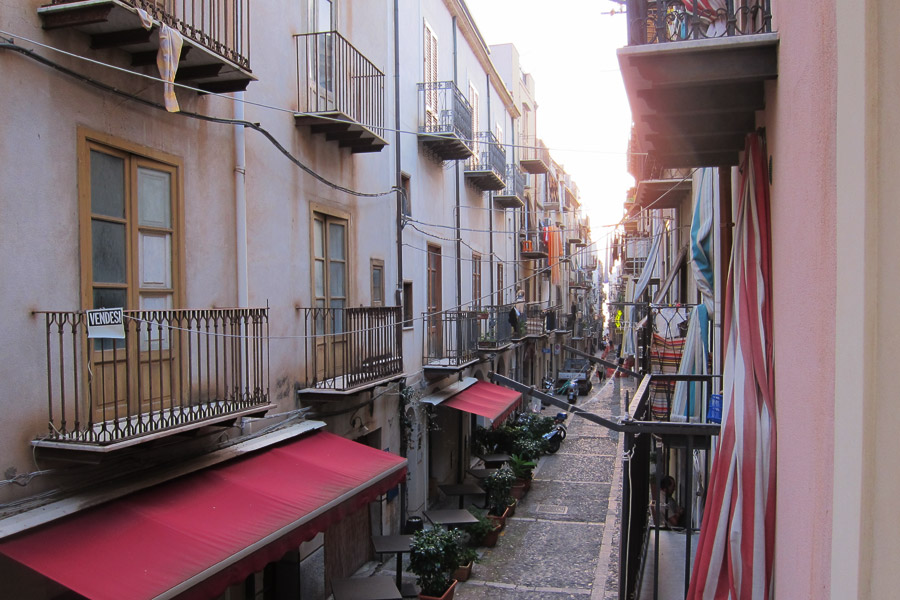 The winding streets of Cefalu.

A bubbling and vivacious fishing village, Cefalu is a darling knot of streets and beach. After the islands, it's a welcome jerk back into bustling civilization. Al Porticciolo is a great, inexpensive place for more swordfish. We ask the table at the end of the dock to eat above the rocks and the dark ocean, the water swirling below.

My biggest takeaway, aside from the fact that Sicilian fruits and vegetables are in a class of their own, and that I could live off granita, and that I love swordfish so much I actually gave myself mercury poisoning, is that I felt this trend emerging away from the stately formal hotels (although, we did see a few of those) to these kind of experiential places, with just a few rooms, beautiful working grounds, where all the guests eat together at night, share cocktails, and get to know each other. The experience was so much more enjoyable to me, it's the only way I want to travel from now on.