PUGLIA, Italy – When most travelers think "Italian beach vacation," they think of places like Portofino and Capri. Puglia is pretty much the exact opposite of those places — and all the better for it. Where the Italian Riviera and Amalfi Coast are groomed, glamorous, and unabashedly luxe, Puglia is rugged, simple, and totally laid-back. Its sun-baked landscape, dotted with low-lying farmhouses and miles of olive groves, is reminiscent of neighboring Greece. But its spirit is 100 percent Italian.

Located in the heel of Italy's boot, Puglia is where the Italians go for vacation. Once you step onto its white sand beaches, where the crystal clear water rivals any in the Caribbean, and explore its charming but not overly touristed towns, you'll see why. This is a place where life slows down and a day's greatest dilemma might just be choosing which flavor of gelato to order. Plus, burrata cheese hails from the region and you'll find it in abundance at pretty much every meal. It doesn't get better than that.

With more than 500 miles of coastline, Puglia is a deceptively large region. Don't expect to explore it all in one trip. (My boyfriend and I tried and didn't even come close.) Bordered by the Adriatic on one side and the Gulf of Taranto on the other, the coast is extremely varied. Drive long enough, and you'll see ultra-soft sand beaches with calm-as-a-bathtub water turn to a rocky cliff-lined coastline (with many spots to jump from the cliffs into the sea) and back to sand again. Whether you opt to stay in one place or hop from town to town as we did, you'll find plenty to explore. Just bring a good GPS. More than once, a road we were driving abruptly dead-ended at an olive tree, and we found ourselves backing up down less-than-perfect country roads.

WHAT WE WISH WE HAD KNOWN

We wanted to explore historic towns like Ostuni and Lecce in addition to lounging on the beach, so we spent one of our nights in Lecce. But while charming, most towns are better experiences in a few hours of exploration and not an overnight stay. I would have spent more time in the countryside and at beach hotels and seen Lecce in a day trip instead. 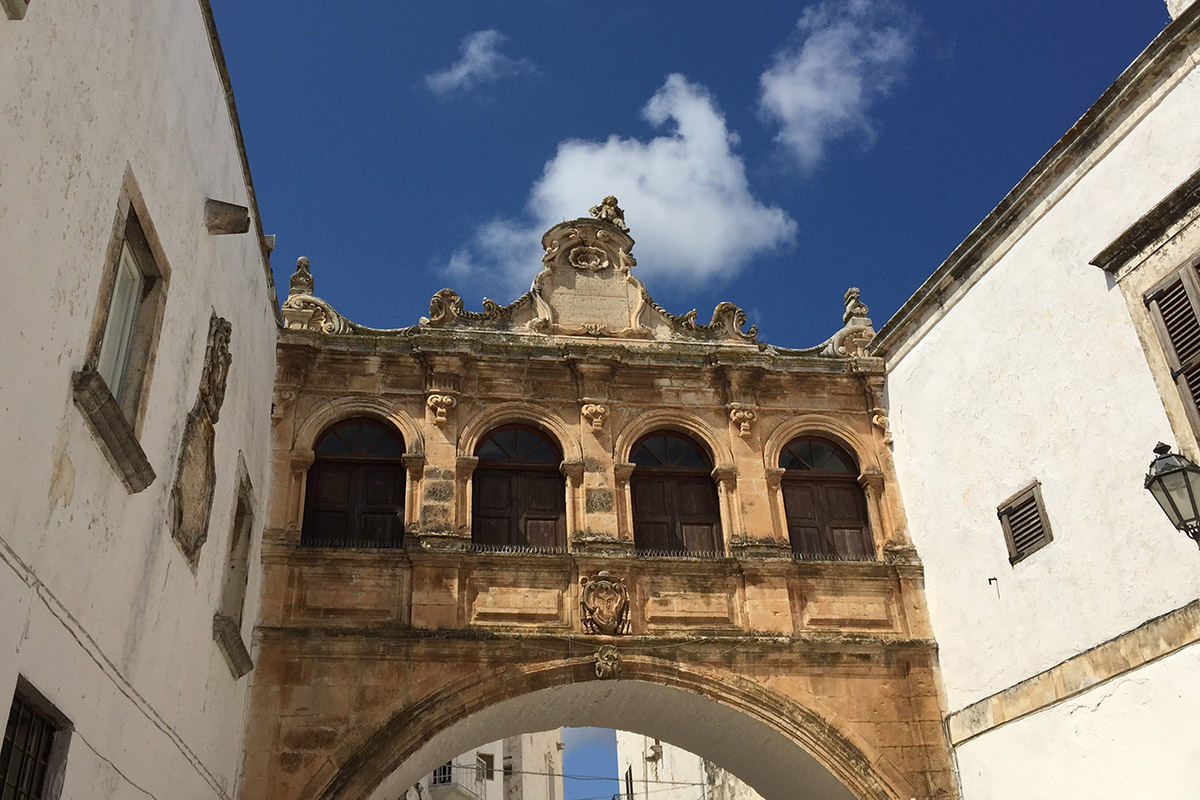 Arco Scoppa, an 18th-century loggia between two ancient palaces by the Duomo in Ostuni. 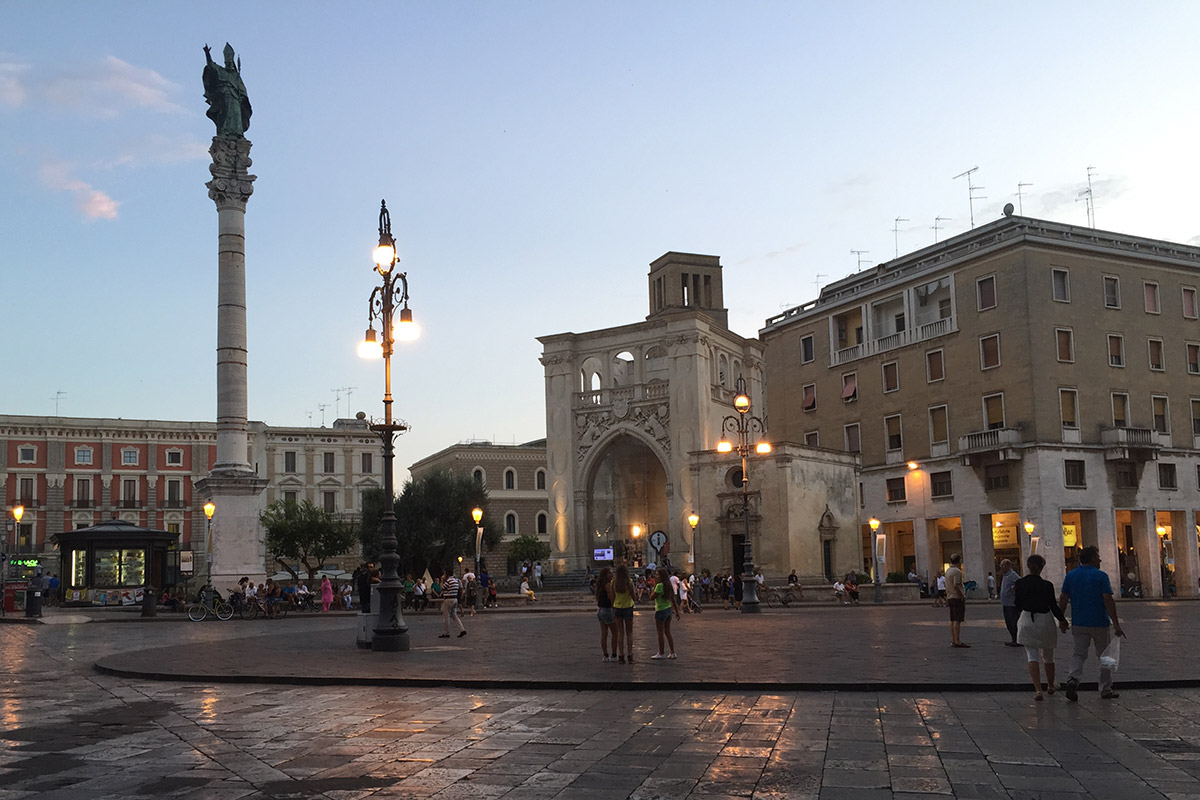 Sunset at Piazza Sant'Oronzo in Lecce.

Eat Breakfast. All of It

I don't know what it is about Apulian hotels, but they go all out on their breakfast spreads, which are typically included in the price of your stay. Every morning, we would promise to show restraint but end up toting plates piled high with burrata, straciatella, local breads and jams, fresh-baked pastries, and incredible creamy homemade yogurt and cereal. Embrace it. Luxuriate in it.

Lounge on the Beach and on the Cliffs

Like many European beach destinations, Puglia's coastline is dotted with private beach clubs. There are plenty of spots offering public beach access, but the beach clubs are the way to go. For a small fee (we never paid more than 15 euros per person), they will provide towels, chairs, and an umbrella. The clubs have restrooms, restaurants, and waiters who will make sure your glass of wine is never empty.

For an upscale boho vibe (think Balinese day beds and plenty of teak furniture), try Coccaro Beach Club. Not only do they have a beautiful beach, but they also have a cute boutique and an excellent lunch menu. For something with a decidedly more local feel, Togo Bay Beach Club in Porto Cesareo on the west coast is laid-back and fun. And if lounging on the cliffs and diving in from time to time is more your thing, La Dolce Riva near Otranto is a good spot.

Play Tourist for the Day

When you need a break from the sun — or a little culture fix — pay a visit to one of Puglia's charming towns.

Alberobello in the north is known for its picturesque trulli, the white stone huts with cone-shaped roofs that Puglia is famous for. (They look like the kind of place an elf would live.) Alberobello is also known for its excellent focaccia. Go early because it can get hectic once the tour groups descend.

A bit further south, the whitewashed medieval walled city of Ostuni is worth a stop. A tangle of narrow alleyways and twisty roads, the town is meant for lazy strolls. Let yourself get lost.

The beautiful baroque town of Lecce is a must. With ornate buildings crafted from the local sandstone, the sophisticated architecture is something of an anomaly among the otherwise simple buildings in the region. If you end up spending a night here, as we did, eat dinner at Le Zie or Ristorante la Torre di Merlino, but avoid the overpriced and flavorless food at La Scarpetta, which every hotel concierge inexplicably recommends.

Another good stop is the walled southeastern port town Otranto. Grab an ice cream at one of the town's many gelaterias and buy a pair of hand-crafted leather sandals from one of the many tiny shops. 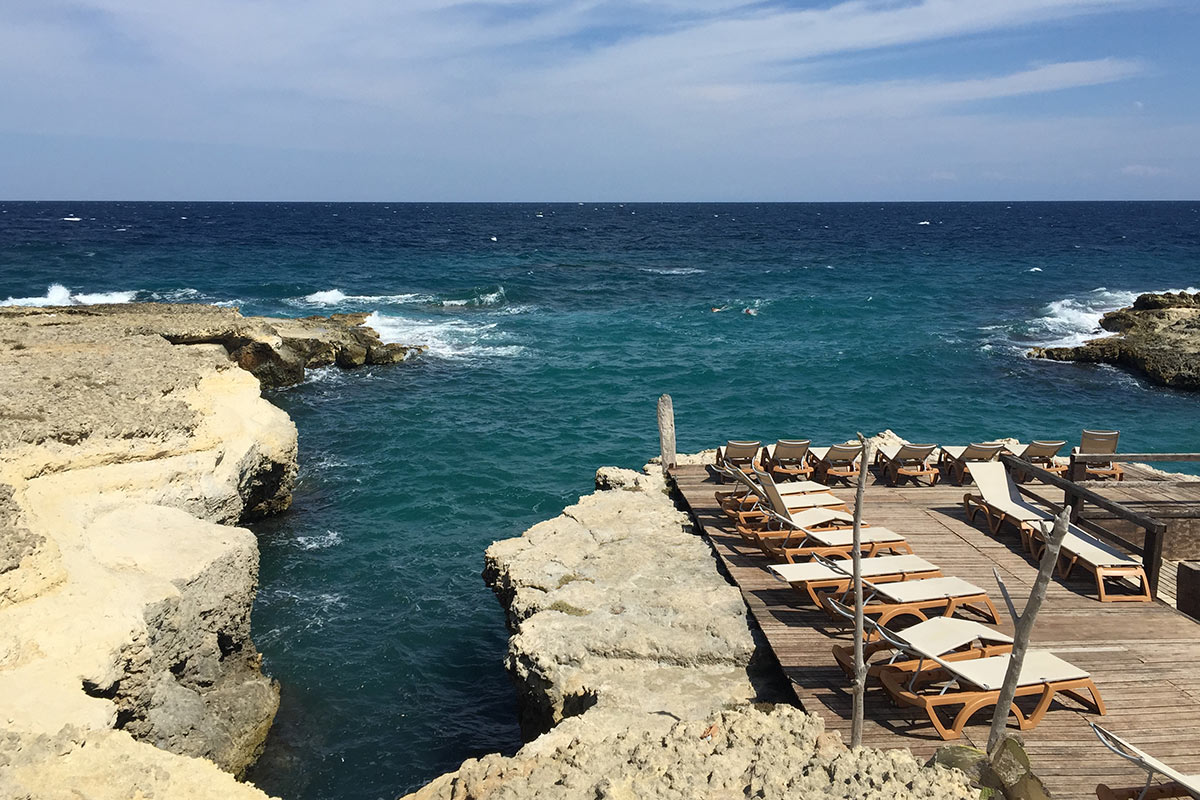 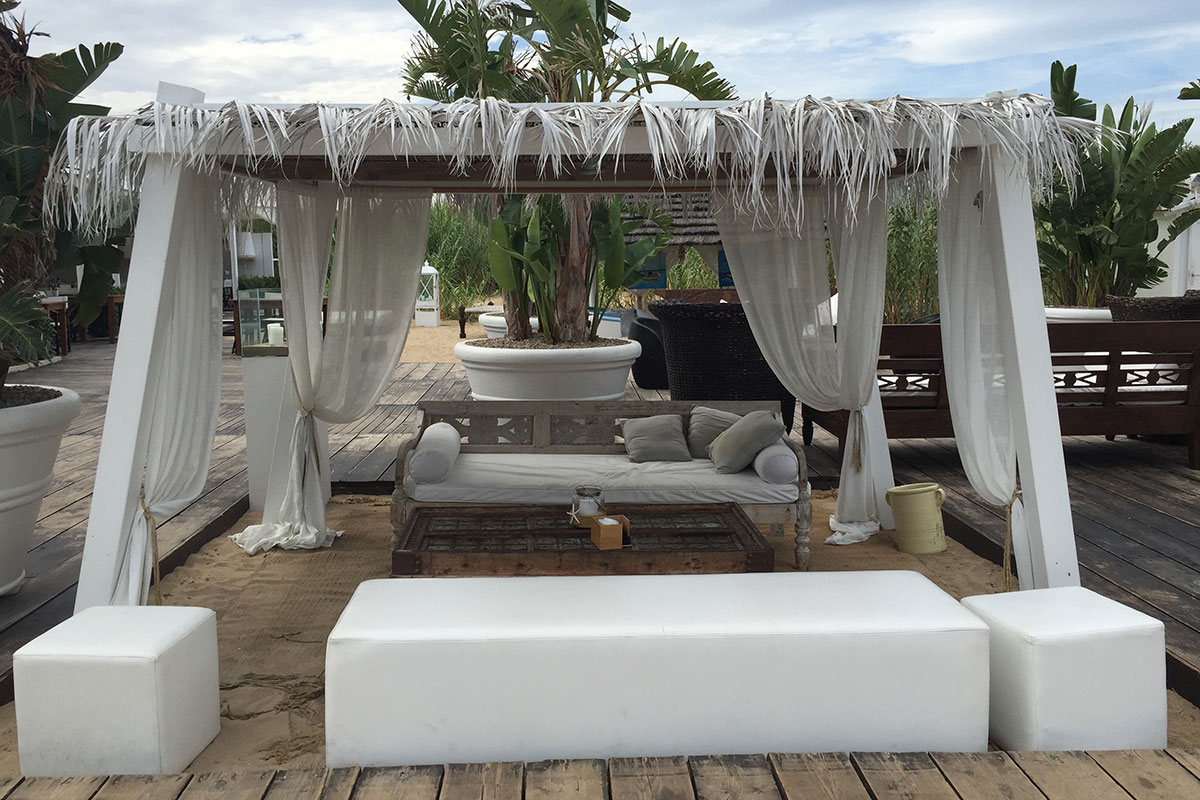 Sure, Tuscany's wine might be more famous, but Puglia has excellent bottles on offer at a fraction of the price. Apulian reds tend to be full-bodied and are often made from negroamaro and primitivo grapes. The region produces fewer whites, including a deliciously dry, crisp verdeca. We usually ordered the house wine at the beach clubs and restaurants and were never disappointed.

If you're looking for a particularly special place to have a sunset drink, Borgo Egnazia is a stunning property with a gorgeous bar. (This is the hotel where Justin Timberlake got married.) Try to convince the security guards to let you through for an aperitivo. Grotta Palazzese in Polignano a Mare is another good option. Built into a cliff overlooking the crashing waves below, the setting really can't be beat.

Embrace the Local Cuisine at an Agriturismo

In Puglia, everywhere you look there are signs advertising "agriturismo." Working farms that open their doors to visitors for farm tours, as a restaurant, or as a bed and breakfast, they offer a glimpse into the local way of life.

On a country road, not far from Ostuni, Masseria il Frantoio is one of the best. The organic farm accommodates a limited number of guests every night. It's critical to reserve in advance. Before dinner, the farm's owner gives guests a tour of the property and teaches the history of his land. Then his wife and her team of all-female cooks prepare an eight-course feast that changes daily depending on what is fresh and in season. Highlights from our visit included pizza with fresh tomato sauce and ricotta, house-made sausages stuffed with local cheese, and homemade pasta with pesto and zucchini flowers. It's a very special meal and well worth the food coma you will inevitably fall into afterwards. They also have beautiful, simple rooms if you'd like to stay on-site.

Another agriturismo worth visiting for a meal or to spend a few nights is the gorgeous Masseria Potenti.

Traditionally known as cucina povera (literally "food of the poor"), Apulian food is simple, but incredibly rich in flavor. Interestingly, pasta in the south is made with semolina flour and water — no egg. This makes the pastas much lighter than those of the north. Even those who think they are well-versed in Italian cooking will learn a host of new skills at a class around here.

We took a cooking class in the kitchen at Palazzo Margherita, Francis Ford Coppola's hotel in Basilicata. (Read more about it on Fathom.) We spent a night here before venturing down to Puglia and learned to roll pasta and form it into popular shapes like orecchiette. We also watched as massive balls of burrata were formed in a local cheese shop. For cooking classes in Puglia itself, I have it on good authority that Cook in Puglia offers excellent options. Most hotels should also be able to set something up for you. 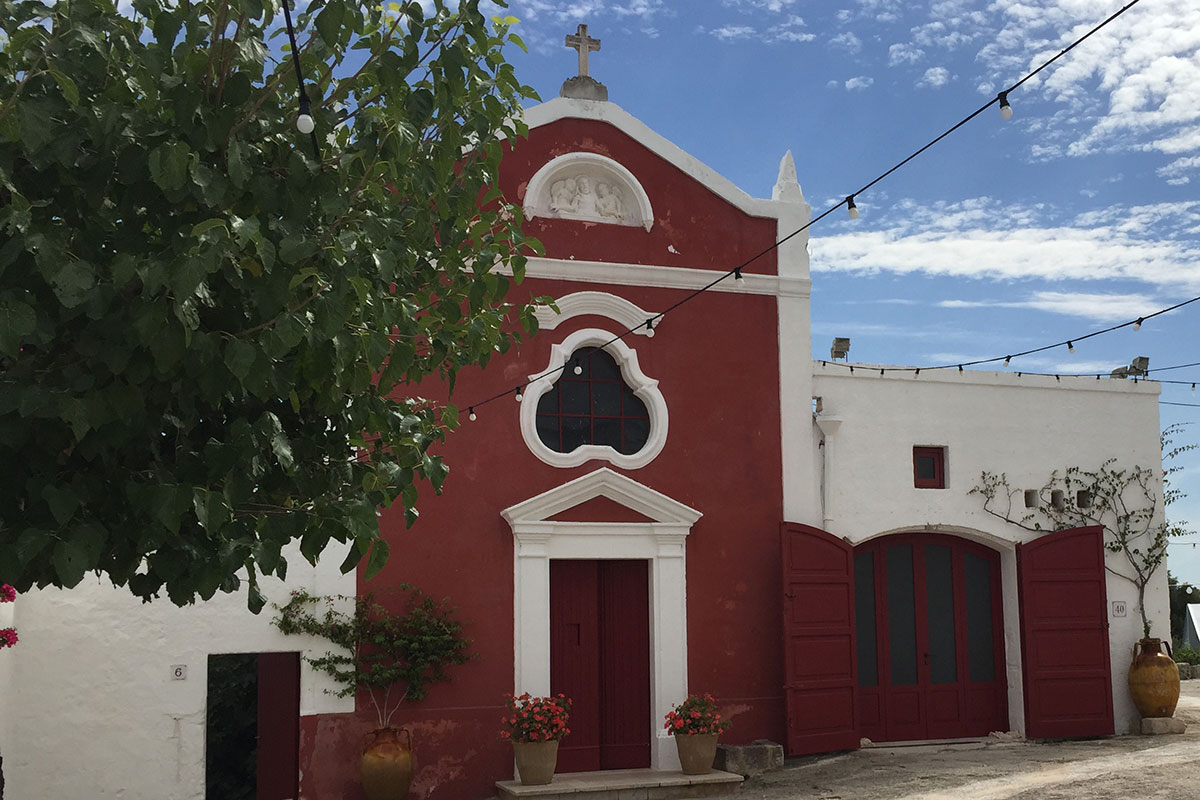 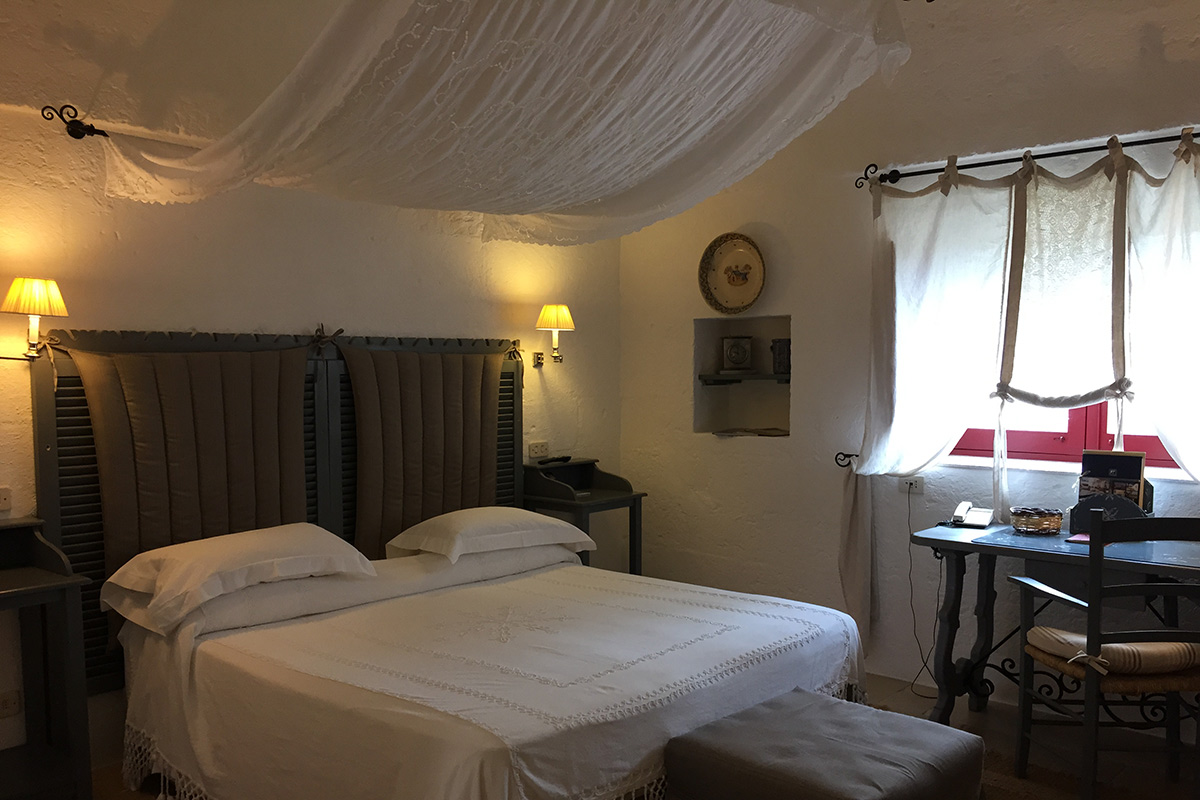 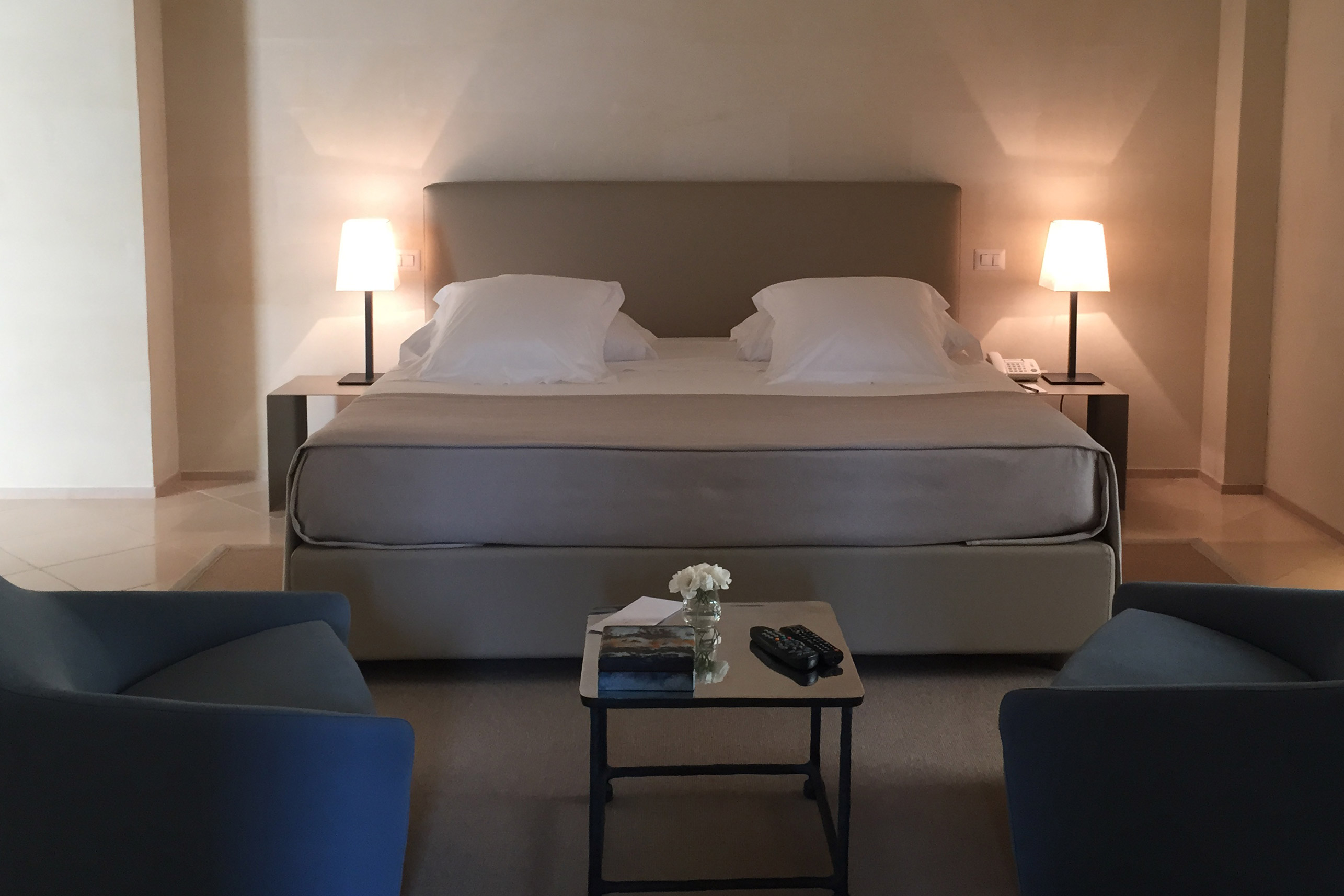 A bedroom at La Fiermontina. Not pictured: the soaring vaulted stone ceiling made of local sandstone designed by famed Pugliese architect Antonio Annicchiarico.

Masseria Torre Coccaro and its sister hotel, Masseria Torre Maizza, are well-positioned for exploring the region, and only a quick five minute drive from the beach. Torre Coccaro is composed of a series of updated stone farmhouses that give it an ultra-laid back feel to complement five-star hotel amenities like an Aveda spa and a breakfast spread to die for.

La Fiermontina is a brand new hotel in Lecce. They call it an "urban resort" because it has beautiful grounds and a pool for those who prefer to lounge. The hotel itself is small and quiet, with well-appointed rooms and a seriously comfortable bed. It's a good choice if a more urban setting appeals to you.

Il Convento di Santa Maria di Constantinopoli may just be the most unique hotel in the world. Restored by the late English lord, Alistair McAlpine, and his wife Athena, the eight-room bed and breakfast houses their eclectic selection of books along with an extensive collection of textiles and decorations from Africa and Asia. The idea at Il Convento is that each guest be treated like a visiting friend. As such, there is an open kitchen policy (take snacks or mix yourself a cocktail anytime of day or night) and meals are served in the communal dining spaces. Whether you stay for a whole week or just a night, Il Convento is once-in-a-lifetime experience. (Read more about it on Fathom.)

Day 1: Fly NYC to Rome, then Rome to Bari. Drive to Palazzo Margherita in Basilicata.

Day 2: Explore the ancient town of Matera. Spend the night at Sextantio le Grotte della Civita. (You can read more about that on Fathom, too.)

Day 3: Drive to Masseria Torre Coccaro with a stop in Alberobello. Spend the day lounging at their beach club. Dinner at Masseria il Frantoio.

Day 4: Drive south towards Lecce with a stop in Ostuni and a few hours at Togo Bay Beach Club. Spend the night at La Fiermontina. 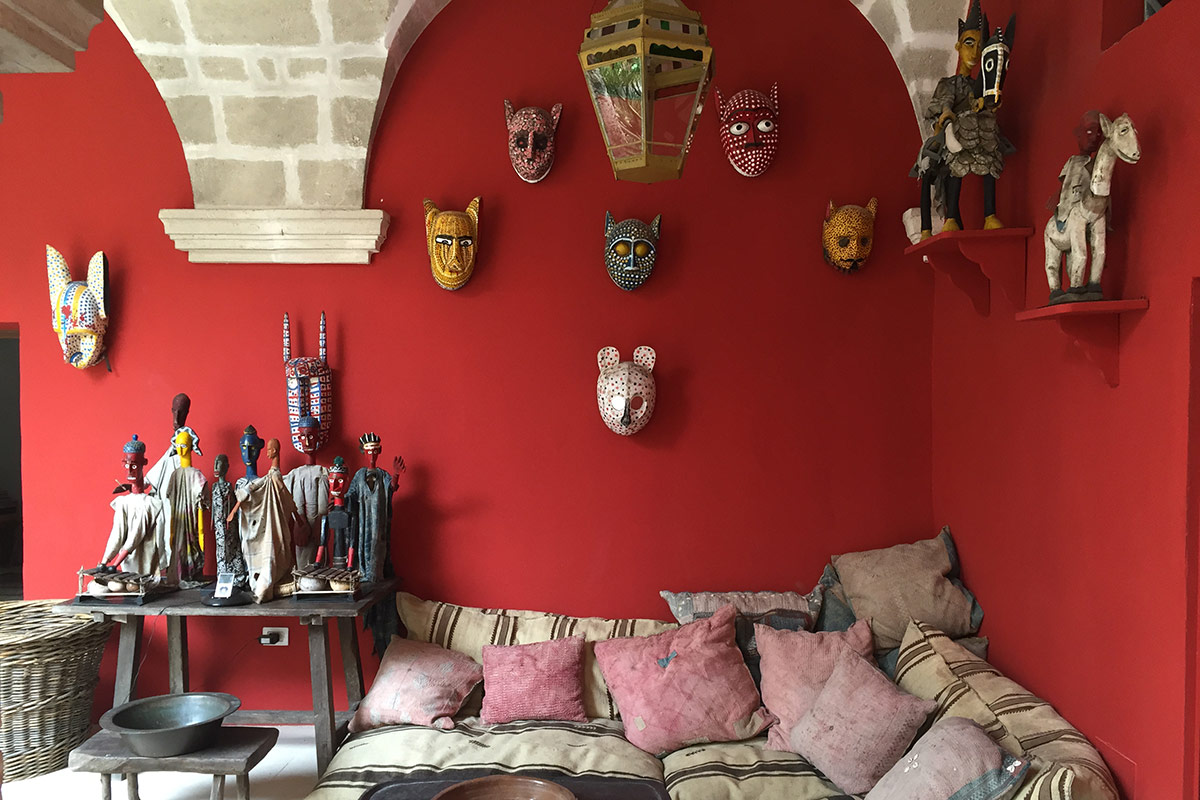 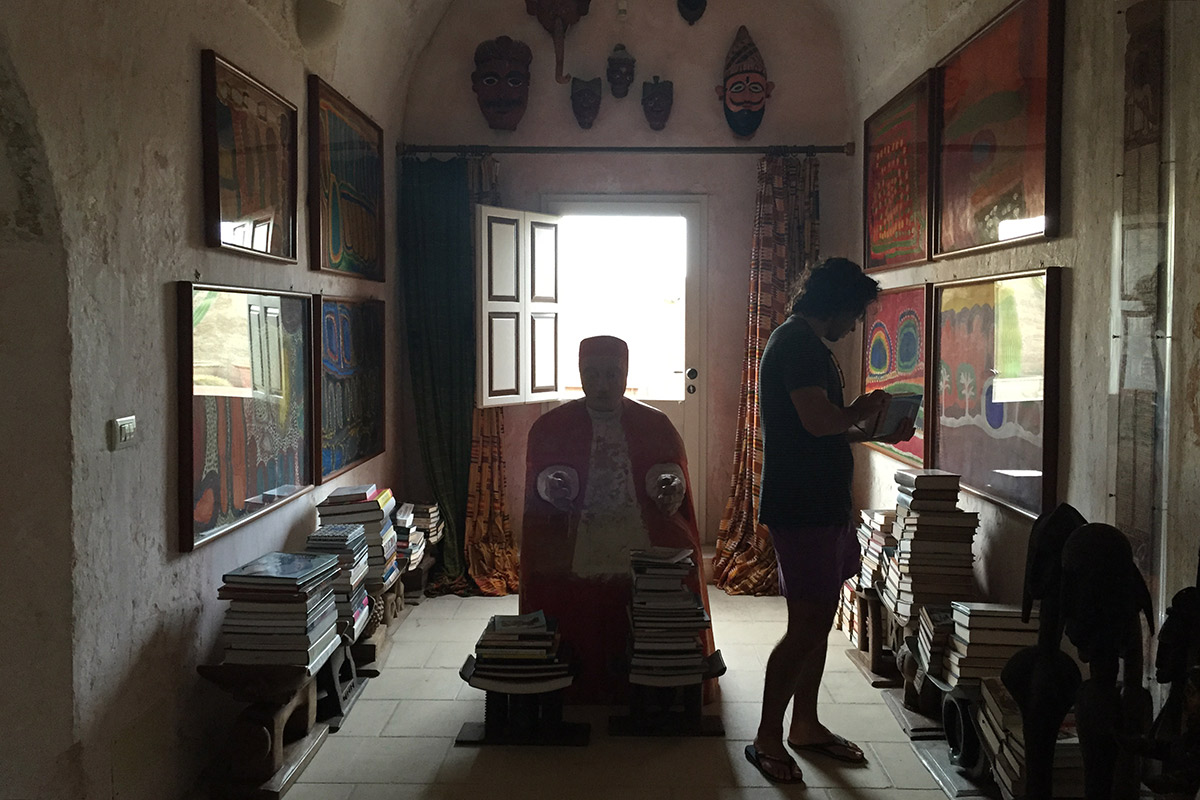 A fraction of the book collection at Il Convento. 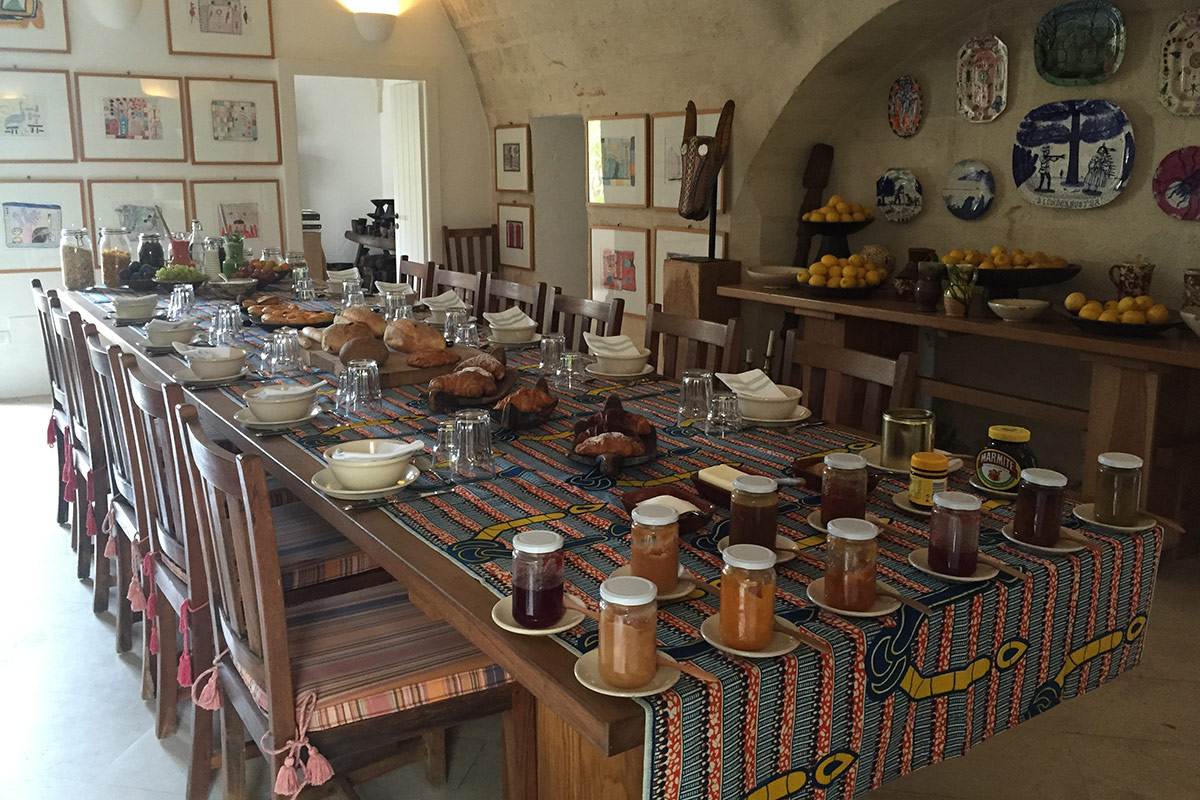 Local jams and fresh-baked breads for breakfast at Il Convento. There was one loaf with large chunks of prosciutto that I hoarded for myself!

A rental car is essential to properly explore the area. Get the GPS — it will be helpful for navigating the mess of small country roads that crisscross the region.

Tourist season begins in late May and runs through mid-September. However, the majority of tourists descend in July and August. We went in early September and it couldn't have been better. Hotels were a little less expensive, beaches were relatively uncrowded, and the weather was warm but mild.