Andria Mitsakos' first trip to Mykonos last year was so incredible she decided to spend this summer on the island. And what do you know: Laptops and business can mix with beaches and boat rides.

I'm a Greek-American who has spent her life shuttling around the globe, continually touching down in Greece — with my parents when I was a kid to do the must-sees, with a boyfriend-at-the-time for a Santorini sojourn — but I had never been to this Cycladic paradise. Now it's a summer ritual.

I feel in love with Hotel Kivotos at first sight. The inspiration and energy are unmatched. Located on a cliff overlooking the Bay of Ornos, the family-owned and -operated property feels more like a clubhouse than a traditional hotel. (Full-disclosure: I love this place so much that I became friends with the owners, moved my office here for the summer, and have done a little consulting for them from the pool bar, which is where I'm writing this.)

The 39 rooms and suites are all different and have been decorated by famous artists and local craftsmen. (I've slept in every one.) They're tucked away in a villa environment with paths that wind their way down through leafy grounds and flower gardens past a freshwater pool ad chapel to a saltwater pool, the Pirate restaurant, and swim-up bar where award-winning mixologist George Akalyptos serves special shots of the day. One of the owners spins music and lunch typically goes late. There's a gorgeous, private beach a few steps below the main pool deck and day beds abound. Bare feet and bikinis are on order for the entire trip.

If I didn't stay here, I'd go to Mykonos Grace, a small, 31-room boutique hotel close to the port high above Agios Stefanos beach. The style is contemporary coastal cool-meets-Aegean beach-side seclusion. Heaven.

When I want a "weekend in the city," I check in to Theoxenia, a 1960s Palm Springs-chic hotel just behind Mykonos town's famous windmills. This is the place to stay if you're on the island for the early morning clubbing, as walking to your room is a dream when you look down at your Blackberry to find it's suddenly 7 a.m. 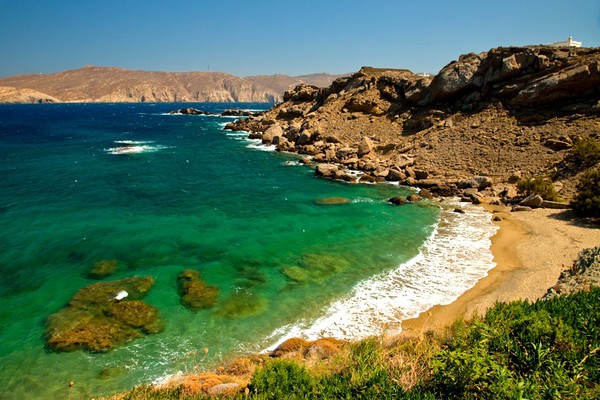 Agios Konstantinos. Don't you wish you were here?

And I'm partying like it's 1812. Kivotos has a six-passenger charter yacht whose history you'll retell over dinner parties all winter long. Prince De Neufchatel was one of the fastest ships of the War of 1812. In 1814, she was chased 17 times by the British navy and outran them every time. She was eventually sent to England for copying after being taken in a gale storm. Built in 1967 in Holland and fully rebuilt in 2008 in Greek shipyards, it can be chartered day, overnight, or three- and seven-day trips.

Yes, Mykonos has lots of Ibiza-type beaches if you want the thumping music scene.

I prefer the bohemian strips of sand that pepper the island. Like Agios Sostis, with its fabulous Kiki's restaurant. (Insider tip: Skip breakfast and dine early as the queue gets long for lunch in the afternoon.)

Also lovely is Agios Konstantinos. It's just beneath Mykonos Star Hotel and is usually deserted.

Other great beaches: the amazing Fokos (don't bother bringing a swimsuit if you're so inclined), site of the great Fokos Taverna. I love Ftelia beach and the superb restaurant there, Stelia. When you go to Kapari near Agios Ioannis, make sure you wear something on your feet.

Aegean Airlines flies non-stop from Athens; Easyjet flies from London and other Euro capitals; and a high-speed ferry runs from Piraeus. My preferred mode of transport is by helicopter or single-engine Cherokee with Thanos Iordanis's company The Luxury Choice. Having a schedule in Mykonos is an anathema.