Cute markets! Elegant fountains! A bucketload of bloody history! Sweet candy! The quaint little French town of Aix-en-Provence charms everyone who passes through — from Visigoths to Picassos to Jolie-Pitts.

AIX-EN PROVENCE, France – Aix-en-Provence — whose first syllable, which doubles as its nickname, is not pronounced "ay," as ninth-grade French class might reasonably make you assume, but rather like X, as in Xbox — feels like a leisurely, cutely snooty, winningly walkable, sun-dazzled French cross between Berkeley and Beverly Hills. Only with fewer Che Guevara shirts and more macarons.

Basking twenty miles northeast of Marseilles between stark mountains and shimmering sea, Aix gives you that "Whee, I'm in a small French town where every random person strolling down every random fairy-tale-cute street makes (a) speaking French and (b) being beautiful seem (a) easy and (b) mandatory" feeling. In this, it's had a lot of practice. Aix's hot springs, colleges, marketplaces, manors, and sweet, sweet candy have lured nobility, scholars, stakeholders, health-seekers, and shoppers — give or take a Visigoth invasion, Saracen occupation, and Frankish plunder or two, plus the Plague — since 122 B.C.

Sunflower-carpeted, lavender-scented Provence, that south-of-France swatch in which Aix is a glittering button, has the mysterious capacity to feel beckoningly, welcome-backishly like home, even if you've never been there before. It's as if nostalgia for tile-roofed stone cottages, superyachts, and the summertime scream of cicadas were already installed inside your brain before you were born, years before you sipped your first pastis.

That might explain why Peter Mayle's bestselling memoir A Year in Provence became a movie starring Marion Cotillard. And it might be why un-French celebrities including Elton John, Bono, Johnny Depp, and the Beckham and Pitt broods have opted (because opting is, ultimately, their thing) to live here.

Is it some kind of mind-controlling retrovirus? Other regions have no such power — not even other French regions. You don't see Oscar winners descending on Poitou-Charentes, say. Or Franche-Comté.

You might say Aix was born in blood. The 300 women who committed mass suicide when they were taken as prisoners by the Romans after they defeated the Teutones and Ambrones in a devastating battle before founding the spa town they named Aquae Sextiae certainly would. Resolutely French after a thousand-year tug-of-war between locals and invading barbarians, Aix-en-Provence became, under the ultimately doomed but style-forward King Louis XIV, a court city whose palatial homes overlooked lush fountains. And still do, as John Malkovich (who lives here) and Jessica Alba (who vacations here) and other stars would tell you — if, say, you happened to recognize them among the other millionaires sipping local rosé at Les Deux Garçons. 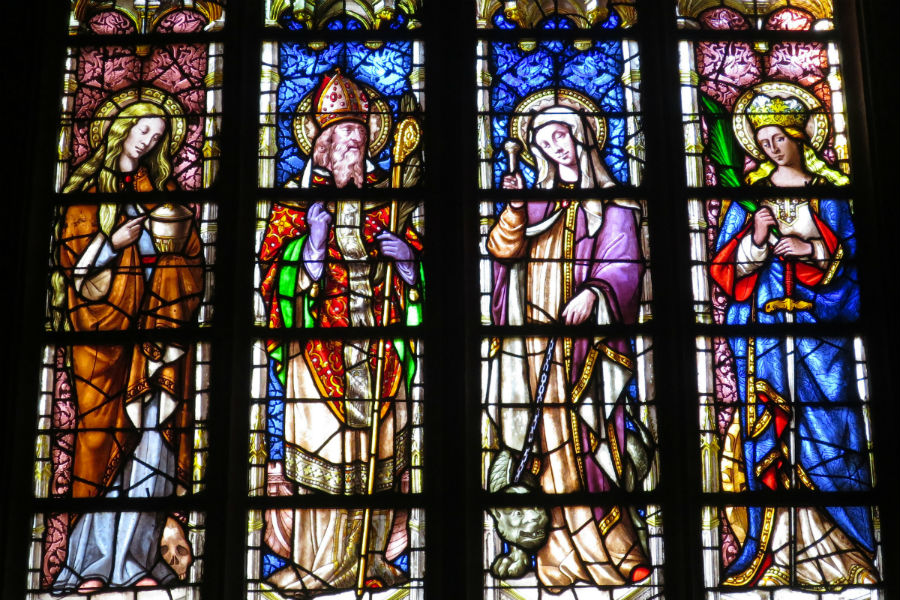 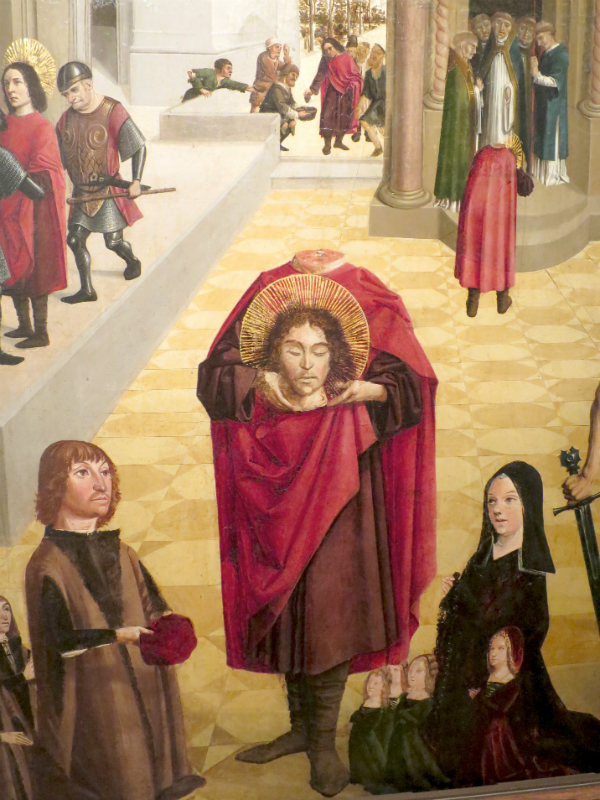 Stained glass and a St. Mistral painting in Saint-Sauveur Cathedral.

A TALE OF TWO DISTRICTS

Then cross the Cours into the Old Town, whose biscuit-colored buildings centuries older than the whole USA make you think "tailor" and "cobbler" and "candlestick maker," but actually house trendy shops, hipster bars, and those blithely gorgeous people you see scootering around conveying baguettes. Because, you know, freshly baked bread for every random meal. Of course.

Crowning the Old Town and reaching for the sky is Saint-Sauveur Cathedral, a soul-stoking structural hybrid whose construction started in the 5th century — allegedly atop a Roman temple to Apollo — and continued through the 15th. Key scenes in Guy Gavriel Kay's urban-fantasy novel Ysabel occur inside Saint-Sauveur. In real life, it's a whole semester's worth of history, spirituality, art, and architecture under one stratospheric roof. However much time you spend at the cathedral, after you leave you'll remember those dragon statues and the colorful painting of St. Mistral calmly cradling his severed head. And you'll wish you'd spent more. 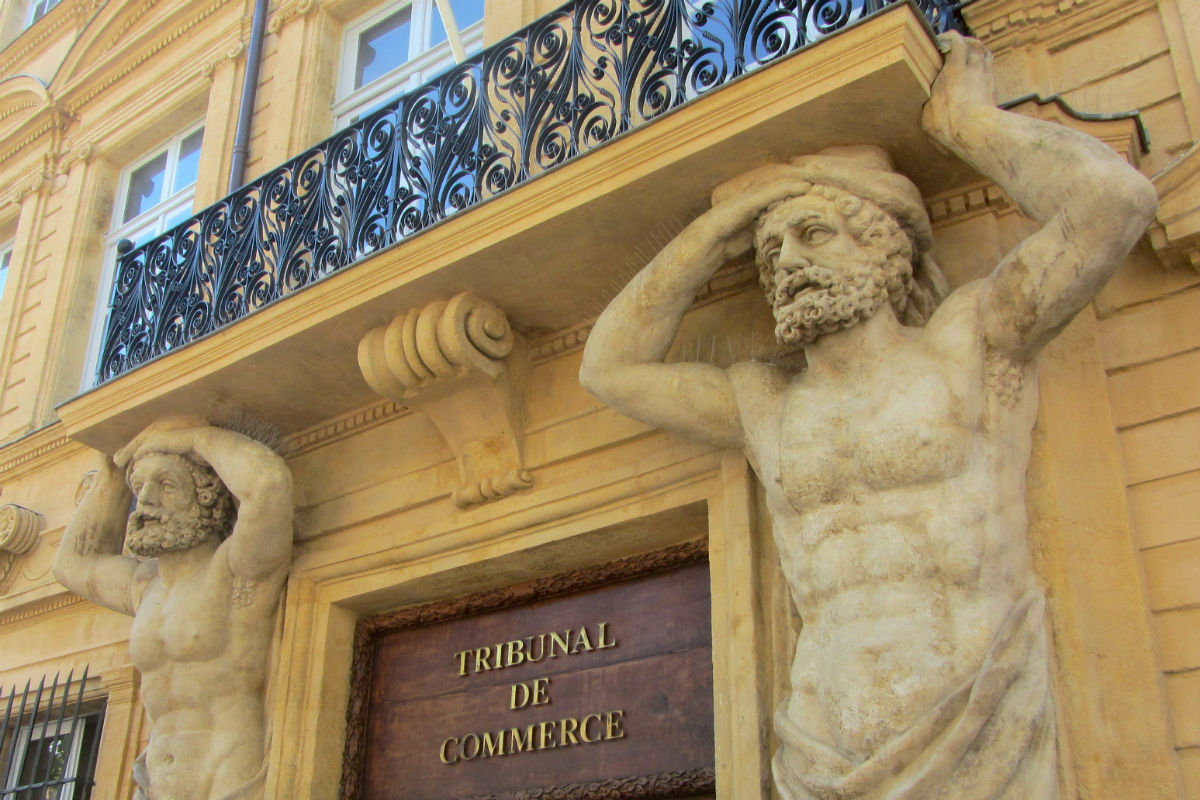 A dramatic doorway in Old Town. 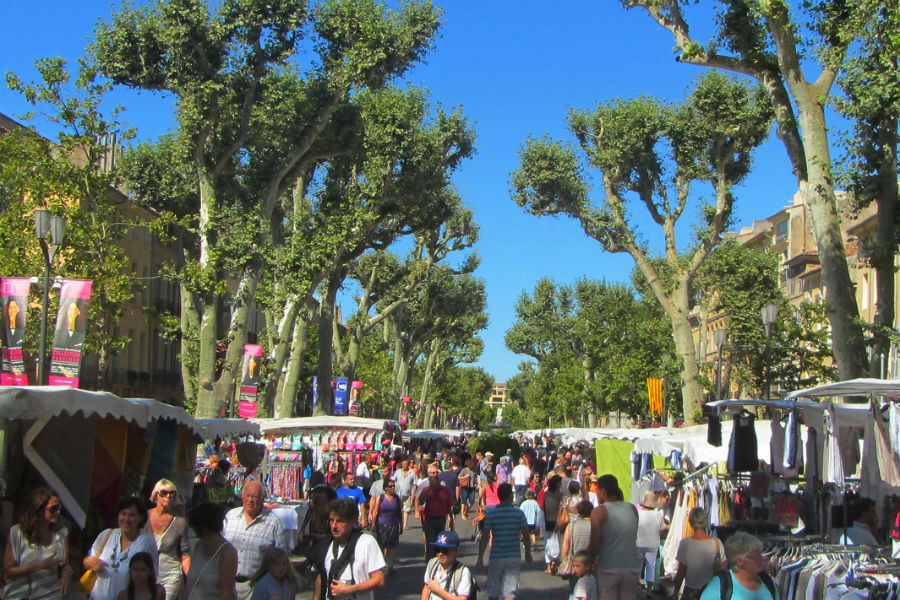 The textile market on Cours Mirabeau.

Having harbored the rich for centuries, Aix can't help but be a high-style shopping hub. Indoor, outdoor, old-skool, ultramodern, funky, and luxury shopping: Choose your poisson.

Aix's Old Town is a twisty-turny, wallet-draining warren of ateliers, boutiques, confiseries, and farmers' markets selling everything from Rolexes and paintings to locally grown lavender sachets and santons (those tiny terracotta Nativity figurines that are Provence's primary handicraft) to vintage Chanel suits. If you do only one thing in Aix, it should be this: Spend a spring or fall (hey, they're less sweltering than summer) afternoon spent browsing the Old Town.

It might be fun to arrive in Aix with totally empty luggage — because then, boo-hoo, you'd just have to acquire everything you want or need right here. There's a market happening almost every day on a street around the Old Town. Every Tuesday, Thursday, and Saturday, fruit-and-vegetable markets are held in Place des Prêcheurs and Place Richelme; a flower market in Place de l'Hotel de Ville (city hall); and a crafts and collectibles market in Place de Verdun. Another clothing and textile market thrives every Tuesday and Thursday on Cours Mirabeau. On weekends, a clothing and textile market operates every Saturday in the Law Courts, and secondhand books are sold the first Sunday of every month on Place de l'Hotel de Ville. 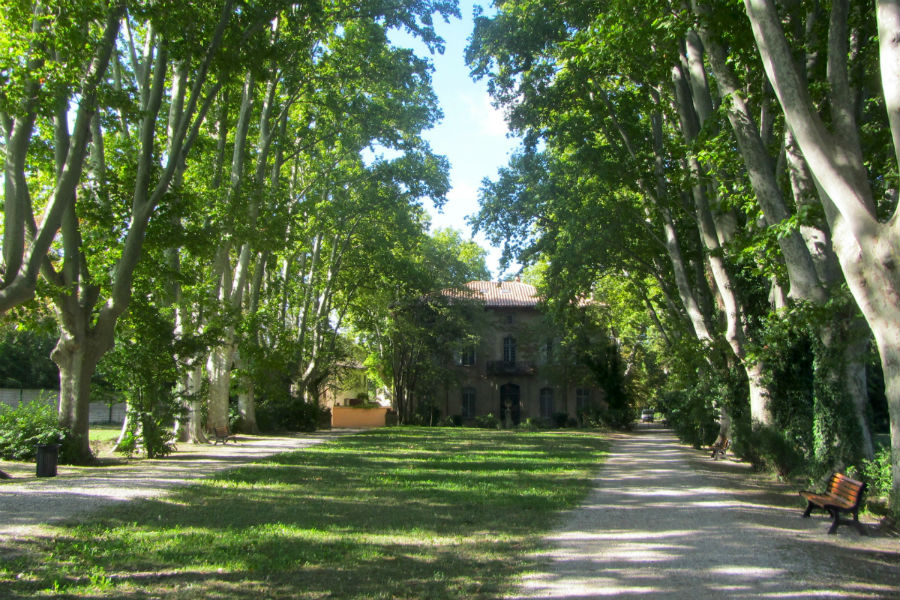 Paul Cézanne was born in Aix, and it was here as a schoolboy that he met the future novelist Émile Zola. These BF-not-quite-Fs left to launch illustrious careers in Paris, after which Cézanne returned to Aix. Although Aixers hated his post-Impressionist work, he continued painting for the rest of his life.

Landmarks along Aix's Route de Cézanne include the artist's stately home, Bastide du Jas de Bouffan; the Bibémus quarries that put him in a cubist frame of mind; and l'Atelier de Cézanne, the studio which displays his actual furniture, tools, and still-life elements like the skulls that appear in his 1901 classic Pyramid of Skulls. Overlooking Aix from the east is the bald gray peak that Cézanne loved to paint: invitingly hikable, 3,000-foot-high Montagne Sainte-Victoire.

Some of Aix's choicest mansions have been turned into museums. Musée des Tapisseries occupies a former archbishop's palace. The Natural History Museum used to be a nobleman's 1672 mansion. Finished in 1665 and ringed by formal French gardens, Pavillon de Vendôme is fully outfitted with authentic 17th- and 18th-century furnishings and paintings. Musée Granet displays works by Rembrandt, Cézanne, and others in a former Palace of Malta. The Jean Planque Collection in the 17th-century White Penitents Chapel within Musée Granet includes work by Van Gogh, Picasso, Georges Braque, and other modernists. 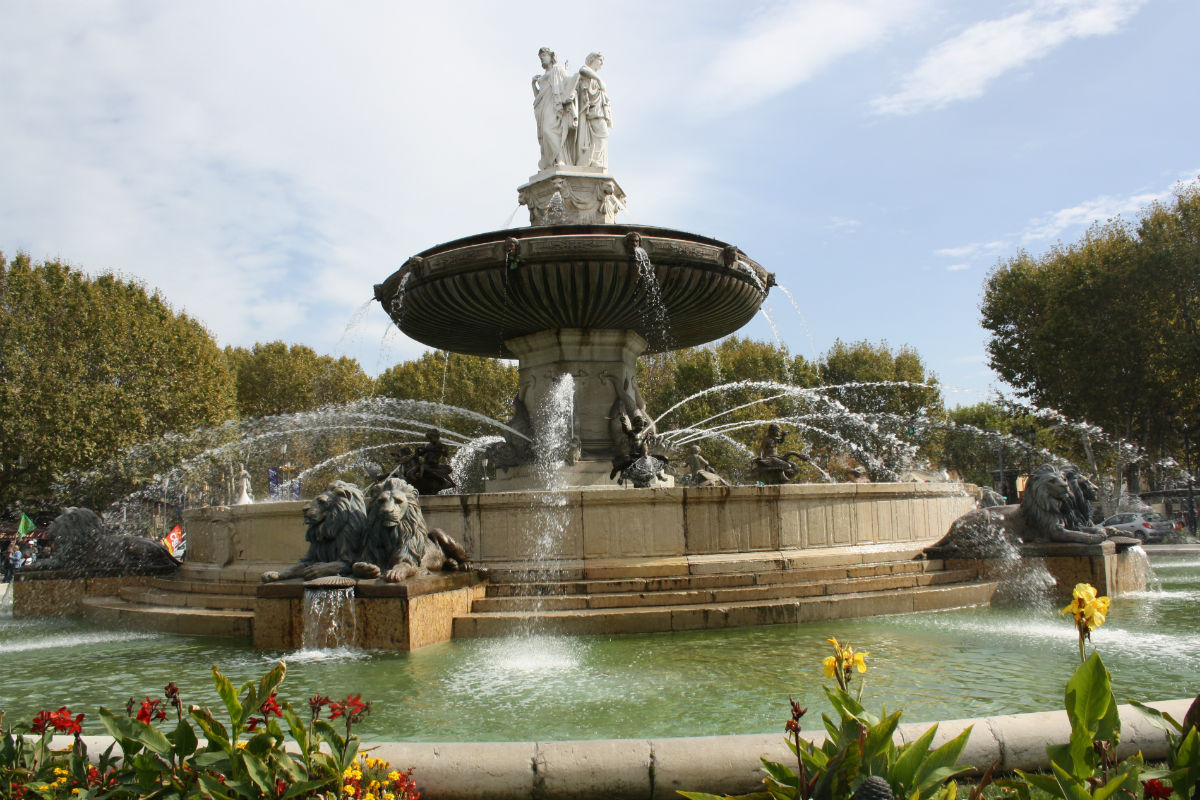 Aix's waters run deep — and are mainly underground. Submerge at Thermes Sextius, a wellness institute on the actual site of the Roman-era Sextius Baths.

Grand fountains dot Cours Mirabeau, boosting Aix's liquid-city cred. Erected in 1667, spring-fed Fontaine d'Eau Chaude is nicknamed "the mossy fountain" because its four stone children are carpeted to virtual invisibility by moss. Fontaine des Neuf Canons was built in 1691 as a watering-trough for livestock. Fontaine du Roi René features a statue of King René of Anjou, who was married here, bearing a cluster of the Muscat wine-grapes that he famously introduced to Provence.

Illuminated romantically at night but set on a traffic-choked roundabout at one end of Cours Mirabeau (and thus not really lounge-able), the flamboyant spring-fed Fontaine de la Rotonde has five tiers and basins, the biggest of which is about the size of a large public swimming pool. Guarding these waters are life-size bronze lions and three stately neo-classical statues. One faces inner Aix, symbolizing the law; another faces Marseille, symbolizing agriculture; and another faces Avignon, symbolizing art. 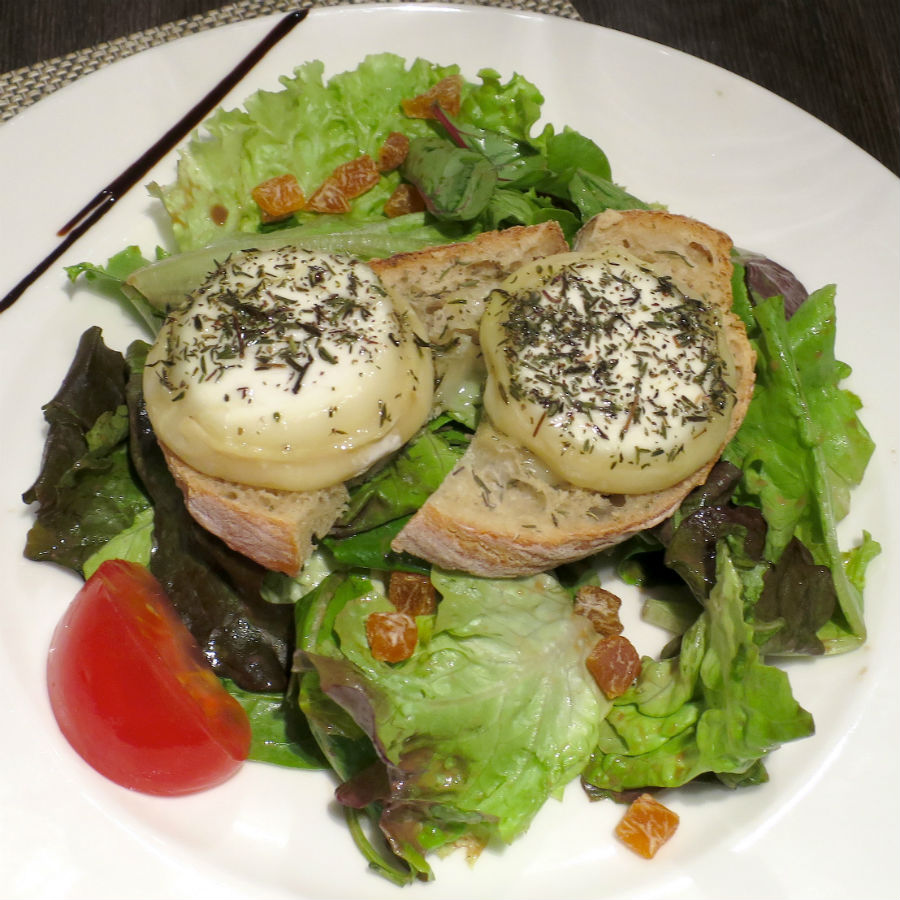 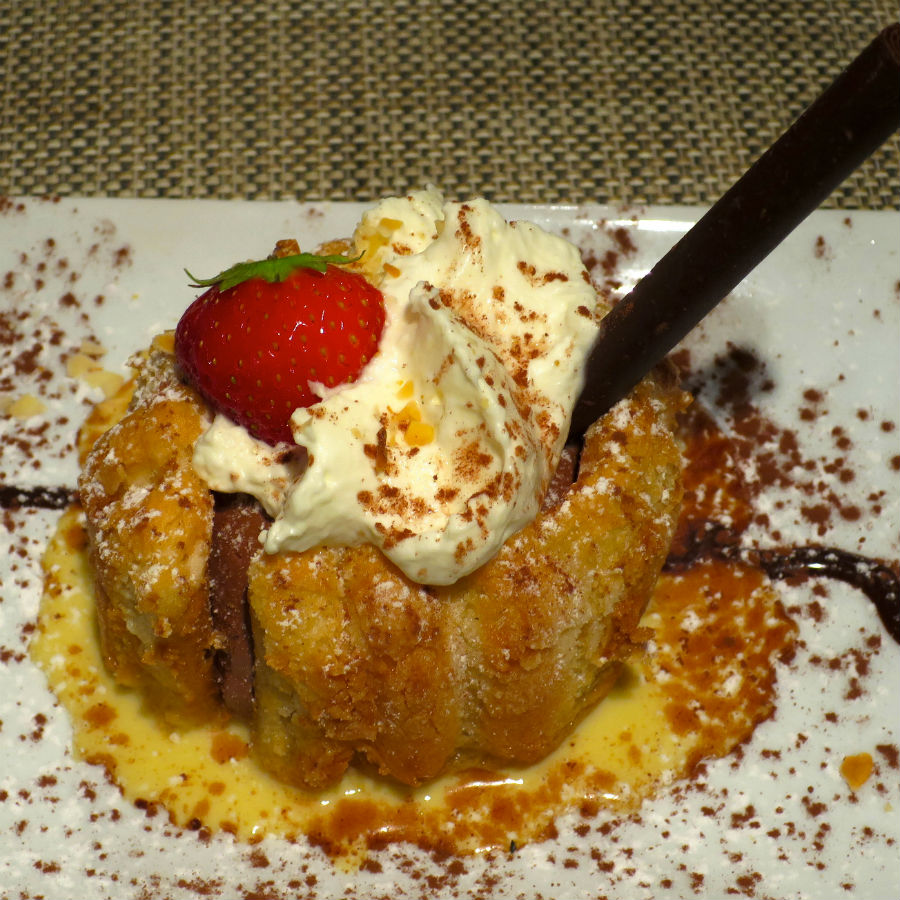 STICK A FOURCHETTE IN IT

A Mediterranean climate, fertile farms, the sea, and nearby Italy and Spain make Provençal food some of France's best. It's a crime to go hungry in this aromatic, hand-me-that-cruet home of almonds, olives, garlic, bouillabaisse, pan bagnat, pissaladière, herbes de Provence, and pastis. Speaking of which: The pale-jade macerated-anise apéritif — Ricard, Pernod, Granier, and Henri Bardouin are popular brands — is traditionally poured over ice, then diluted three to five times over with water before drinking, which makes sense, since Aixers sit sipping pastis for hours on end, starting at 11 a.m.

For dessert, pick up a packet of Calissons d'Aix at Confiserie du Roy René. Invented in 1454 to cheer up King René's unsmiling bride Jeanne after their royal wedding, the boat-shaped local confections are three sweets in one: a paper-thin wafer; snowy icing; and a melt-in-your-mouth amber center made of melon, orange peel, and finely ground almonds. They allegedly worked for Jeanne and, unless you're allergic to nuts, they'll work for you.

But hey — if you're in Aix, you're already smiling.

See all the locations in this story on a map. (Google Maps)

The World's Most Romantic Hotels: France
A Weekend Drive Around Nice and Cote d'Azur
A Day in Bordeaux with Historic French Aperitif and Lunch on the Atlantic