It may be a second city, but Leipzig packs quite a punch. Linda Cabasin takes a look around and finds everything first-rate.

LEIPZIG, Germany – I love second cities, the somewhat under-the-radar places that give me a sense of personal discovery. Leipzig's celebrated musical heritage — Bach, Mendelssohn, Schumann, and others — appealed to me, but I really came to see the art scene that has inspired a creative rebirth in this city near Berlin.

Leipzig's urban revival is an amazing story: Parts of Saxony's largest city (population 560,000) were in such poor shape before reunification that some felt they should simply be demolished. Although World War II bombing had damaged areas, today the compact center hums with energy. A trade, industrial, and educational hub for centuries, Leipzig still holds trade fairs that draw a business-minded crowd. Creative types are drawn to the art galleries, excellent museums and music venues, and lively nightlife. The architecture of the old city, a mix of a few Renaissance survivors, lots of 19th-century buildings, and modern structures, makes the city's appeal less obvious to those who seek quaintness. For me, the varied cityscape reinforced a sense of Leipzig as a cool, stimulating place thriving on diversity.

Leipzig sprawls, surrounded by greenery and industrial remnants, but the walkable heart of the city inside the ring road holds many top sights. The Hauptbahnhof (the huge train station) is on the northeastern part of the ring; the vibrant University of Leipzig is on the east side. A short tram ride west is hip Plagwitz, a former industrial area now home to shops, galleries, and the Spinnerei art center. South of the ring but walkable from the center is the lively Karli, a stretch of Karl-Liebknecht-Strasse with alternative cafés, clubs, restaurants, and street art. 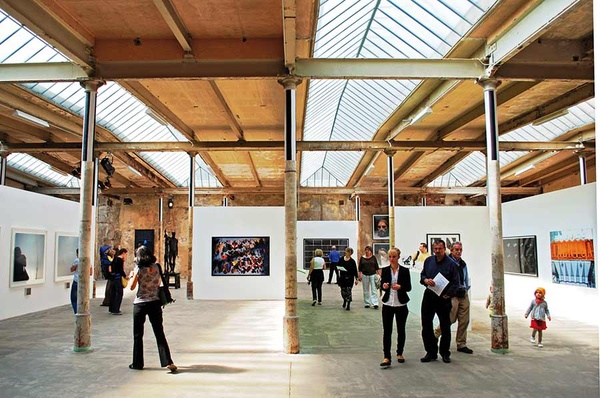 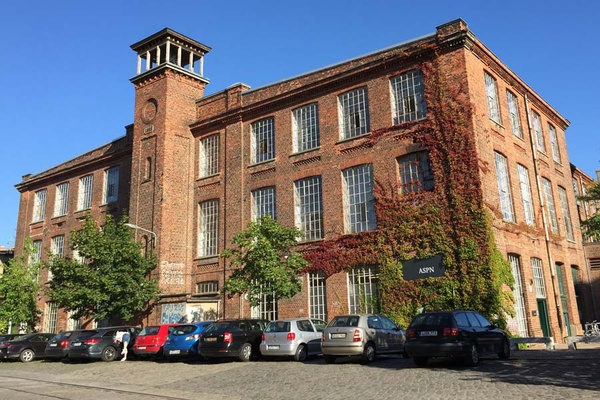 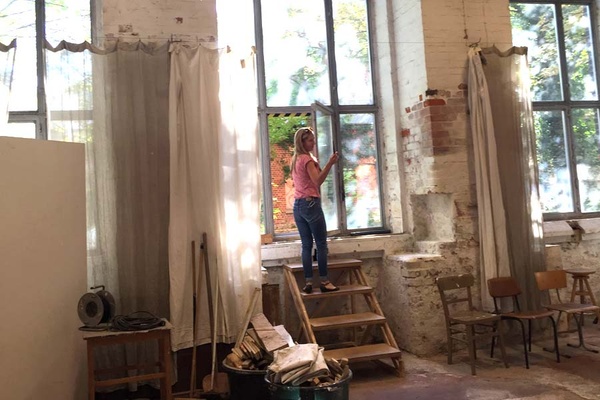 An artist at work. Photo by Linda Cabasin.

These days, many older cities are nurturing artistic creativity, sometimes in amazing spaces that reflect an area's heritage. This is the case at the Spinnerei, where massive buildings that once processed cotton now house galleries and artists' studios. Exhibitions explore the site's industrial legacy. There's no historical amnesia here, and the place is stronger for it.

WHAT I WISH I KNEW ON THE FIRST DAY

Leipzig played a key role in the Peaceful Revolution that preceded the collapse of East Germany, and good museums and sights reveal the hard years of life under communism. I wanted to learn more about this, but ran out of time. 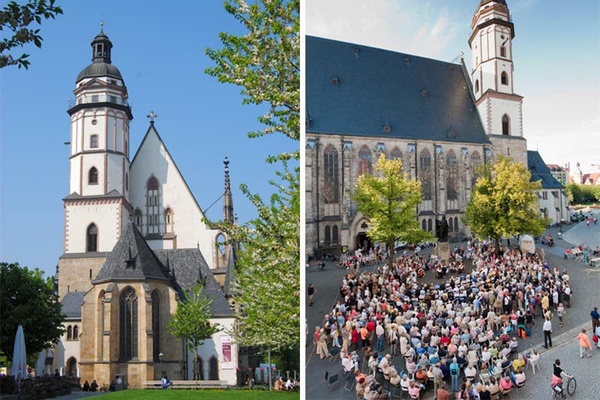 For a fast look at the art scene that has made Leipzig a rival to Berlin, my best bet was Spinnerei, a group of massive brick buildings resembling a small, rough-around-the-edges city. Since the 1990s, spaces in what was formerly the largest cotton mill in continental Europe have been converted to house more than 100 artists' studios and workshops, a dozen art galleries, and other creative enterprises and businesses. Neo Rauch, one of the highest-profile artists of the New Leipzig School of post-reunification art, took space here early. Eigen + Art and Halle 14 are good choices if you're pressed for time. Pick up a site map at the Spinnerei Archiv Massiv, which has exhibits on the history of the complex and the lives of the workers: "From Cotton to Culture" is a motto that is taken seriously. The Spinnerei is at the western edge of hip Plagwitz; take time to explore shops, bars, and restaurants on Karl-Heine-Strasse.

An unapologetically minimalist glass box in the heart of the old downtown, Museum of Fine Arts (Museum der Bildenden Kûnste) opened in 2004 with art treasures from over the centuries. This is the best place to see all the styles of the Leipzig School, as well as German painting from all eras, including eighteen works by the two Lucas Cranachs (father and son). Get an audio guide, since there's not much in English. Don't miss Max Klinger's 1902 marble sculpture of Beethoven as a bare-chested, Olympian figure.

St. Thomas Square is prime territory for those who love the music of Johann Sebastian Bach, thanks to Bach Museum Leipzig and St. Thomas Church, where Bach worked for 27 years. I went just to hear his music, but the savvy interactive exhibits wowed me. A virtual orchestra and galleries of Baroque instruments with audio options make it clear why Bach's soaring music is so special. The listening studio, Bach artifacts and manuscripts, and a map of Bach sites in Leipzig were equally satisfying. Catch a concert here if you can.

Martin Luther, Johann Sebastian Bach, the St. Thomas Boys Choir: key parts of Leipzig's history took place in the clean-lined Lutheran St. Thomas Church (Thomaskirche). Sometimes music can convey more than words, and all that history came together for me at a Motet, a free vesper service that includes Bach's music (and singing by the choir, when they are in town). Bach, the music director here from 1723 to 1750, wrote cantatas for the boys' choir, founded in the 13th century and still in existence. Earlier, in 1539, Luther spoke in the church when the Protestant faith became the state religion of the Duchy of Saxony. In 2017, 500 years after the Reformation began, music can still express faith powerfully. 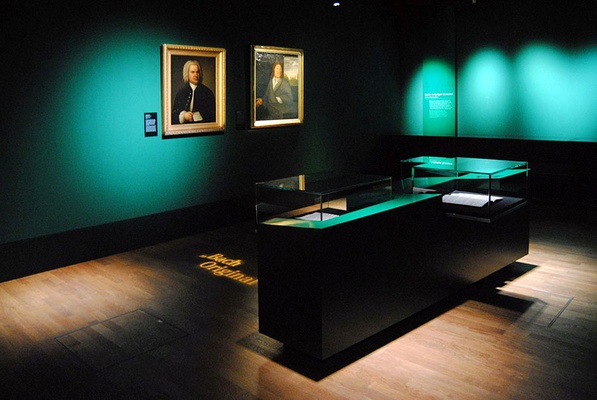 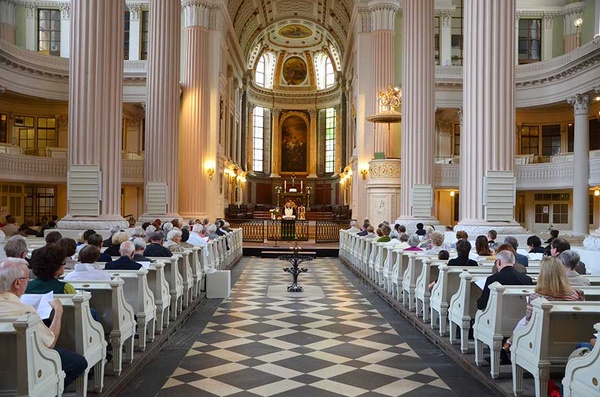 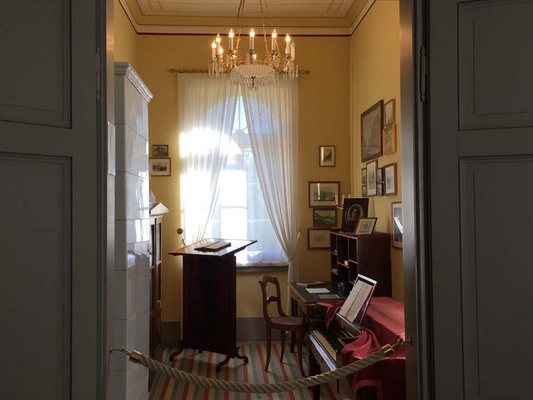 Coffee culture can be a good way to understand some cities, and Leipzig is one of them. At the Arabian Coffee Tree Museum (Arabischer Coffe Baum) in a centuries-old coffeehouse, check out exhibits on the history of coffee drinking (a Turkish legacy), including a coffee roaster, cups, and more — then reward yourself with a flaky pastry. Two elephant heads on the entrance of Kaffeehaus Riquet are just one flourish at the ornate Art Nouveau period piece from the early 1900s. This may be the place to try a Leipziger Lerche, a pastry with almonds, nuts, and marzipan.

At St. Nicholas Church (Nikolaikirche), I rediscovered what Leipzigers don't forget: Their role in the Peaceful Revolution helped bring down the communist government of East Germany. Since 1982, people had gathered for Monday prayers and demonstrations. Events came to a turning point on October 9, 1989, when a nonviolent demonstration of more than 70,000 people was allowed to continue. After that, events moved inexorably to reunification in 1990. The neoclassical church is a calm space today. Linger and you may feel, as I did, the power of peaceful resistance embodied here.

Mea culpa: I didn't get to visit Museum in the Round Corner (Museum in der Runden Ecke) in a former district office of the infamous Stasi, the East German secret police, but I heard amazing things about it. The name refers to the building's shape; inside, an exhibit called "Power and Banality" preserves the original setting and sinister instruments used by the Stasi to spy on every aspect of citizens' lives and compile masses of documentation. The museum's goal: to keep everyone aware of the dangers of dictatorship.

My visit to Mendelssohn-Haus Leipzig was an afterthought, but the small museum really brings the composer to life. Letters, watercolor paintings by Mendelssohn, and original furniture are displayed in the serene neoclassical apartment that was the last home of his short life (38 years; 1809-1847). Technology made it possible for me to conduct a piece of his work. Mendelssohn famously helped revive the music of Bach. Still, because he was born a Jew, he and his music were reviled later in the 19th century and in the Nazi era. It's to Leipzig's credit that his legacy is honored so thoughtfully here. Weekly concerts take place in the music salon. 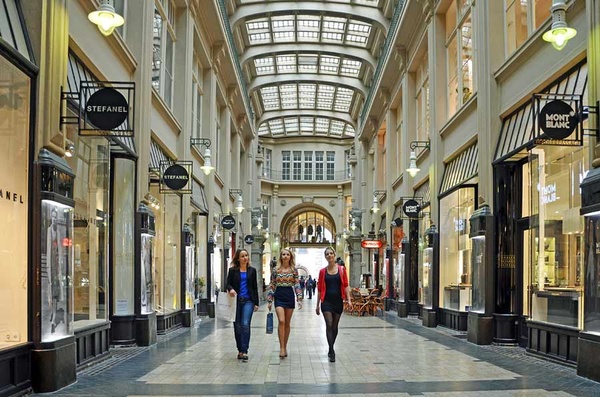 I found that even a fast stroll by a few key sites, old and new, in the city center can show you a lot about Leipzig's past and present.

The Renaissance Old Town Hall, now holding part of the Museum of City History (Stadtgeschichtliches Museum), fills an entire side of the large old Markt (Market Square). Its soaring tower and curving gables are a proud city landmark, and it's worth a stop for evocative artifacts such as the wedding ring Martin Luther gave his wife, Katharina von Bora.

The city's many Passages are a legacy of the prosperous late 19th and early 20th century when buildings were torn down and rebuilt. These distinctive arcades, several with shops and cafés, wind through buildings. Famous ones near the Markt include the Mädler Passage, with soaring ceilings and elegant shops. The ancient Auerbachs Keller restaurant has statues of Mephistopheles and Faust outside; Goethe set a scene in his play Faust at this eatery. Speck's Hof, off Reichstrasse, has vaulted courtyards and Art Nouveau tiles.

Augustusplatz and the nearby area on the eastern side of the old city may not be the prettiest area, but I liked its vibrancy. There's architecture from the communist era at the Gewandhaus, where Leipzig's famous symphony orchestra performs, and the Opera House. Also, here are the modern buildings of Leipzig University (founded in 1409) and plenty of trams. 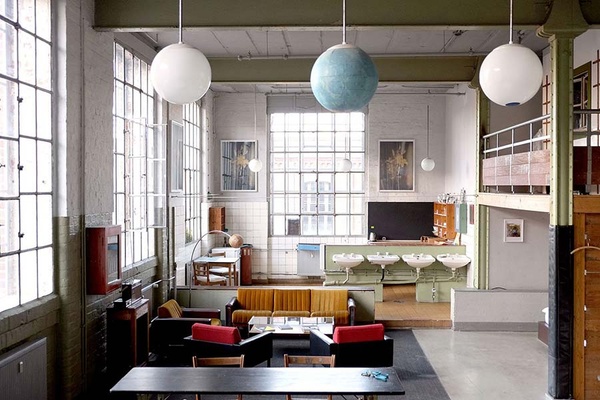 Hotel Fürstenhof Leipzig
Open for more than 125 years, the city's choicest grand dame occupies a former private mansion on the ring road, close to the train station. Along with traditionally elegant rooms and a central courtyard, there's a lovely modern spa and pool.

Meisterzimmer
These four good-value, minimalist apartments in the brick buildings of the Spinnerei art complex are a cool alternative choice. They're a short tram ride from the center and quiet at night, though you're near hipster Plagwitz's eateries.

Leipzig Marriott Hotel
A great location in the city center near the Museum of Fine Arts and the train station made this modern chain hotel a comfortable choice for my short stay. The staff was super helpful with everything from directions to airline boarding passes. 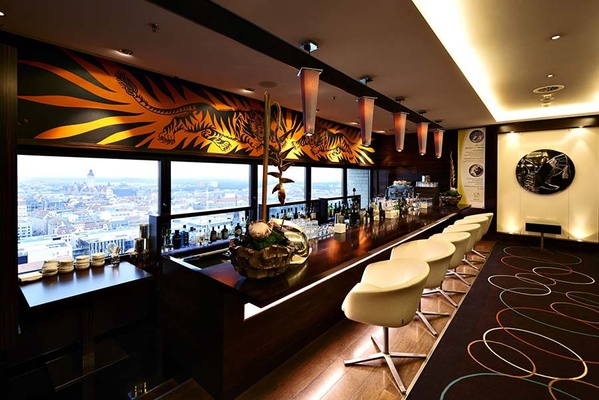 Falco
The upscale restaurant on the 27th floor of the Westin Leipzig, helmed by Peter Maria Schnurr (Gault & Millau's chef of the year for Germany in 2016), has two Michelin stars and is the place to go for creative contemporary cuisine.

Panorama Tower Restaurant
There are many bars and restaurants along Barfussgässchen, off Market Square. For something different, try Panorama on the 29th floor of the needlelike building near the university for spectacular views and good modern food. Prix-fixe lunches are a great value.

Auerbachs Keller
Stop here despite the tourist throngs: After all, Martin Luther, Goethe, and just about everyone else who has visited Leipzig has passed through this institution dating to the 16th century. Dine in the smaller, older rooms or the cavernous 1912 dining room. Good, hearty meat dishes and Saxon specialties head the menu.

How to Get There
Leipzig-Halle Airport (LEJ) is 21 kilometers (13 miles) northwest of the city. Express trains and buses take you to the Hauptbahnhof, the massive train station near the city center. The airport doesn't serve North American destinations directly, but Leipzig is an easy hour from Berlin by train.

Getting Around
It doesn't take more than 20 minutes to walk across the historic city center, inside the ring road. Trams are convenient if you're exploring Plagwitz or the Karli; major tram hubs are near the Hauptbahnhof and Augustusplatz.

When to Go
Late spring and summer are lovely for walking and exploring, though July is the rainiest month. Leipzig's trade fairs, especially in March and April, bring crowds and higher prices. Winter months can be cold, but everything is open; fall is a good alternative. The major event every June is the 10-day Bachfest Leipzig.

Money Matters
Although tipping isn't mandatory, you can round up your taxi fare or bar tab, or add a euro. Restaurant bills include service, but you should round up the check or give about five percent additional in cash right to your server.

What to Pack
Good walking shoes are a must for city wanderings, along with an umbrella. Casual dress is fine, though you may want to dress up a bit for a concert or more upscale dining.