Fathom's Daniel Schwartz took a trip from New York City to Lake Placid to check out an outdoor museum experience suspended above the forests of the Adirondacks. There he goes again, falling in love with the great outdoors.

NEW YORK – I've taken almost every opportunity to escape New York City for the seashores of Long Island, the hamlets of the Hudson Valley, and the hiking trails of the Catskills. But I had never breached the 6 million acres of the Adirondacks, the largest natural park in the continental United States, until a recent weekend trip to Lake Placid. My reasoning: Why drive five hours for mountains when they're two hours from the city?

Before I recap the three-day weekend, a little trivia for those who think Upstate New York is Westchester: Lake Placid is the largest city in the Tri-Lakes region of Adirondack Park, a public preserve that's essentially an experiment in sustainable co-existence the size of Vermont. The trifecta also includes the picture-perfect postcard town of Saranac Lake and the lesser-known but up-and-coming destination of Tupper Lake.

Lake Placid was the site of the 1932 and 1980 Olympic Winter Games and is hallowed ground for the sports-inspired, especially hockey fans, who come to relive the adrenaline of the Miracle on Ice match between the United States and the Soviet Union. The small town, home to one of only two Olympic training grounds in the country, also draws athletes going for gold.

I, on the other hand, was invited to New York's Olympic Village (along with other journalist from the city) to participate in a feat of athleticism one could accomplish on a full stomach — a walk in the woods at Wild Walk, a museum experience suspended on top of forests nearby in Tupper Lake. The walkway opened in July 2015 as an extension of the Wild Center, the natural history museum next door, and has since been dubbed the High Line of the Forest. An attractive comparison, but not the full story. 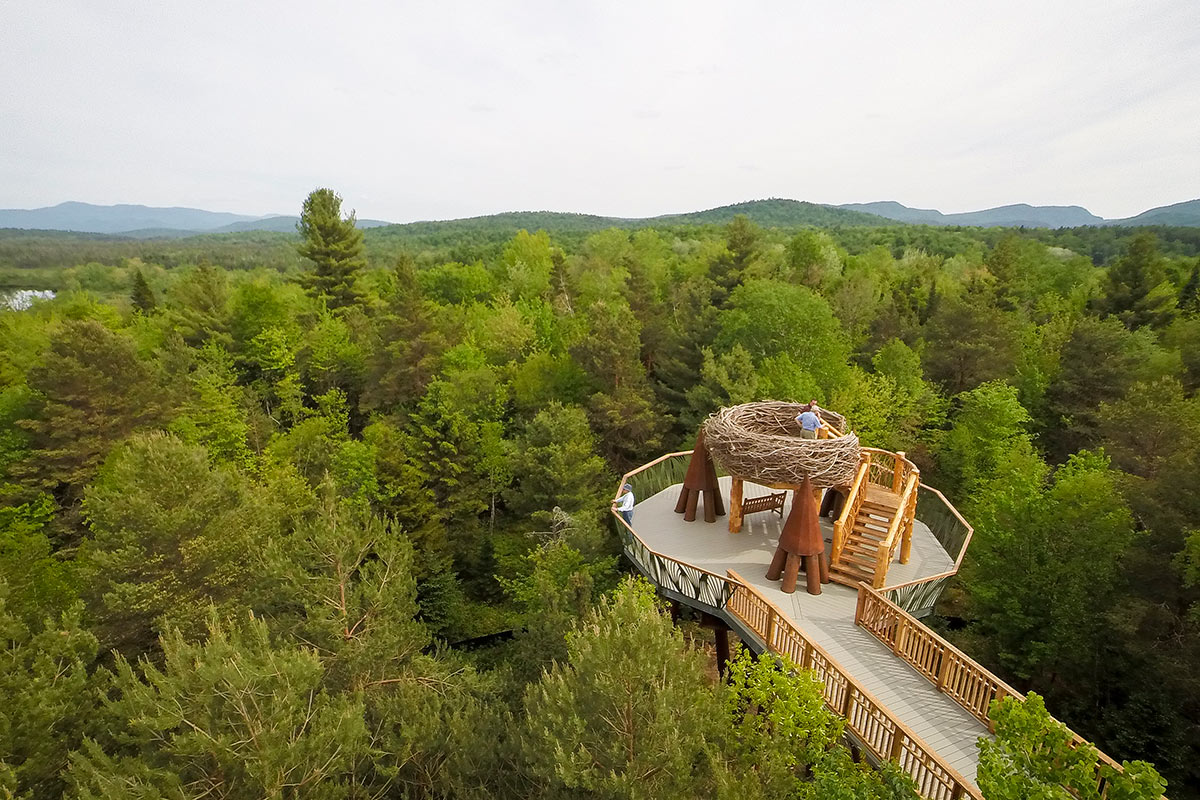 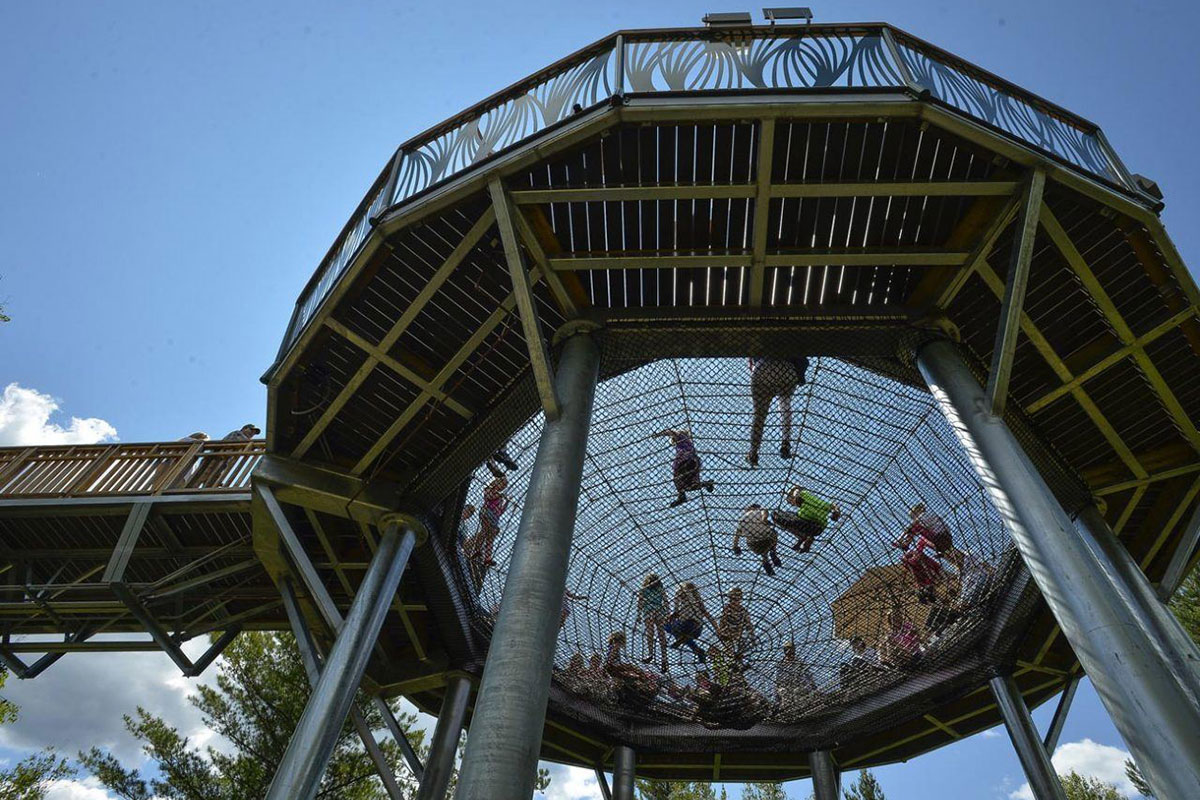 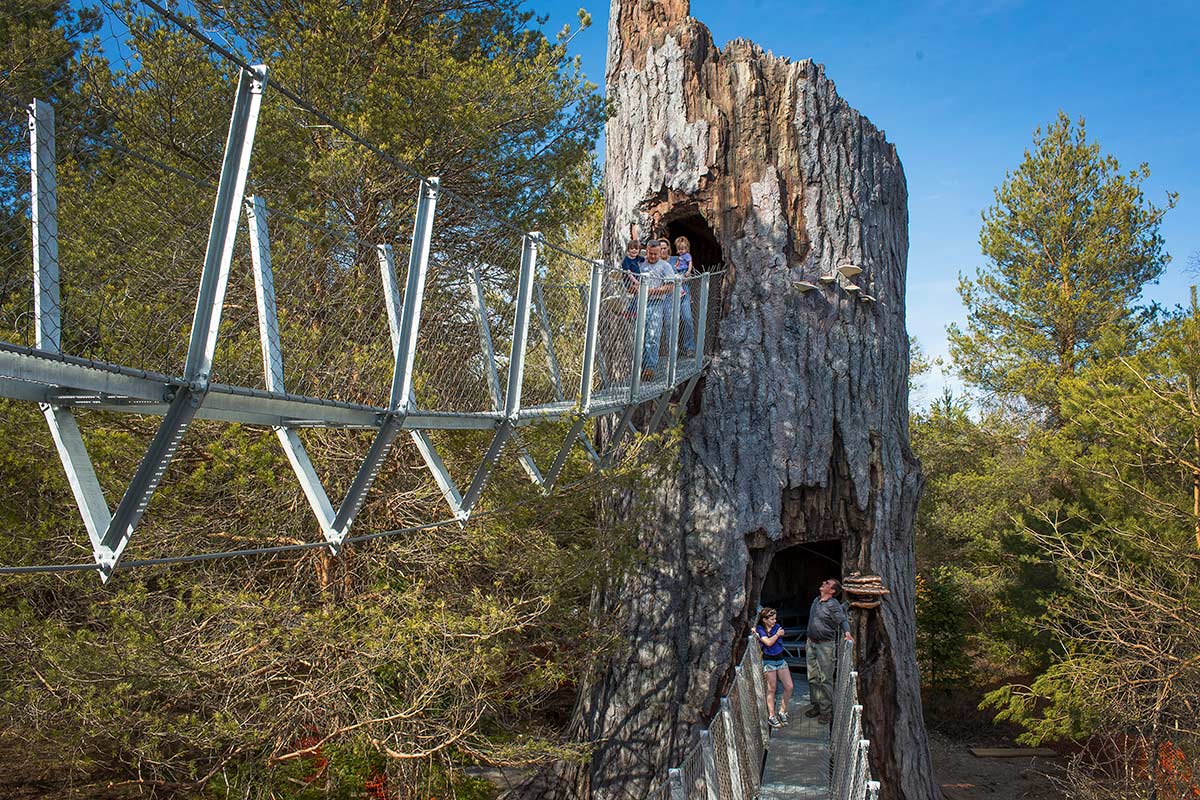 Charles Reay, who helped build the National Air and Space Museum in D.C. and the IBM Pavilion at the 1964 World's Fair in Queens, designed Wild Walk as an outgrowth of the forest — a series of interactive installments connected by bridges and supported by tree-like towers that beckon visitors to experience the wilderness from an animal's point of view. Literally.

The walk's biggest attractions include a palatial eagle's nest, built four stories off the ground and not much larger than the largest ever recorded, which has sweeping views of the four biggest mountains in the Adirondacks (high-end scenery for the forest's top predator). There's also a life-sized spider's web with an even larger black widow model looming overhead. (Look out for visitors posing for perfect Instagrams.) And then there's the Snag, a highly realistic concrete recreation of a dead white pine, the largest skyscraper in the forest. The three-story hollowed bark is a walk-through lesson in how creatures (not just hipsters) repurpose organic space.

The Wild Center, a short walk at ground level past the Pines, a playground where the only toys are pieces of wood, also takes a literal approach to highlighting the region's ecology. Interactive shows and exhibits are complemented by live animals (not taxidermy models), many of whom are free to commute between their holdings and the spacious pond outside. I could have spent hours watching turtles tussle and otters nap, but on our schedule, we had just enough time to observe a naturalist showcase a shy owl and a chef taste-test bugs in front of a queasy audience.

What was the rush? We were due at Raquette River Outfitters, a campy cabin studded with every color of canoe and kayak located a short drive south of the Wild Center. The plan was to paddle down the calm waters of Simon Pond and merge onto Raquette River.

We hit the water in bright red boats. Mosquitos danced at our naked feet. The afternoon sun beat down our bare necks. We passed baby boomers on pontoon boats, couples kayaking (with their dogs), and lake houses, each with their own variety of watersport equipment (including seaplanes) strewn across their lawns.

After a while, it was just us and the loons and the fish in their mouths. And the clarity that comes with exhaustion. If we were all Olympians, we could have paddled hundreds of miles through the region's lush interconnected waterways (there's even an opening into the oxbow that runs right up to the Wild Center), but we docked after a modest loop for a swim and sunbathe (in our underwear, of course). The company dog couldn't wait to join. 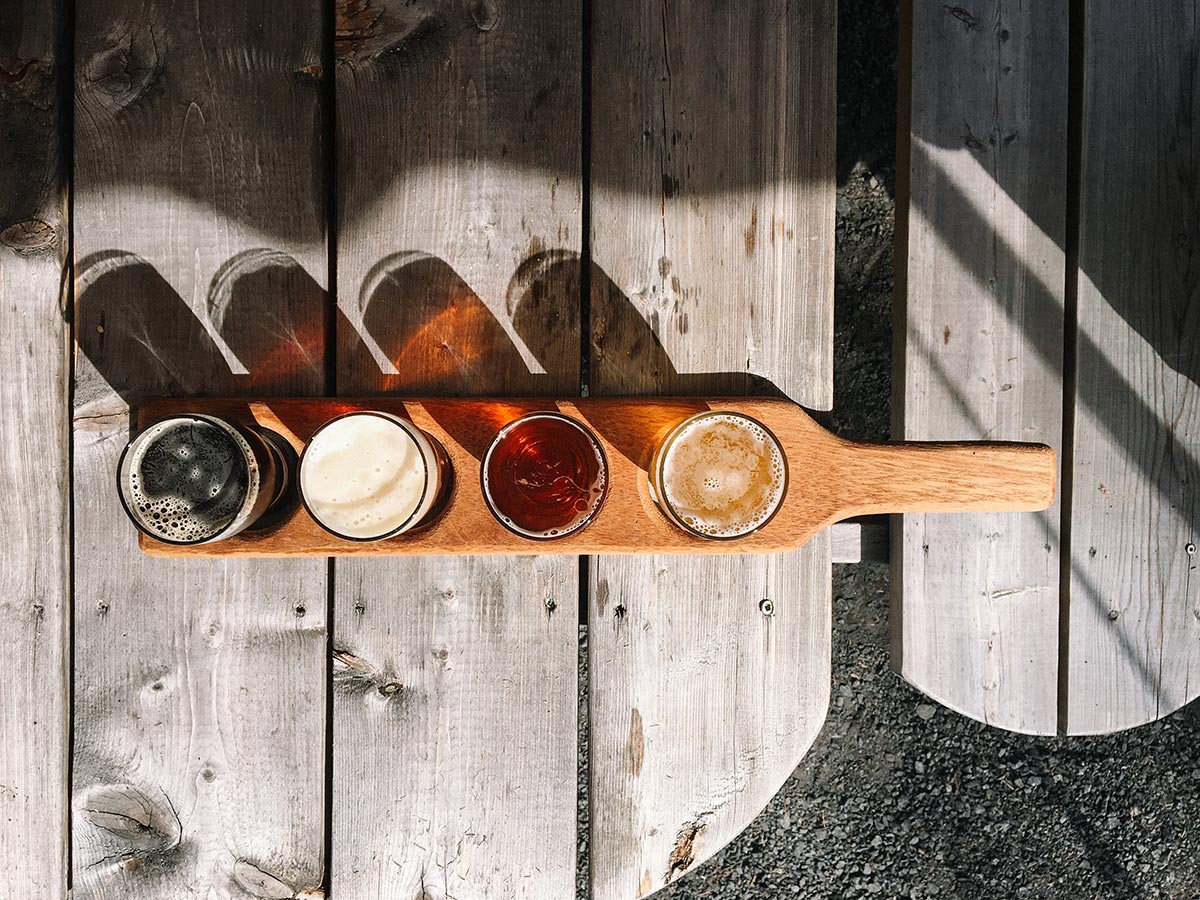 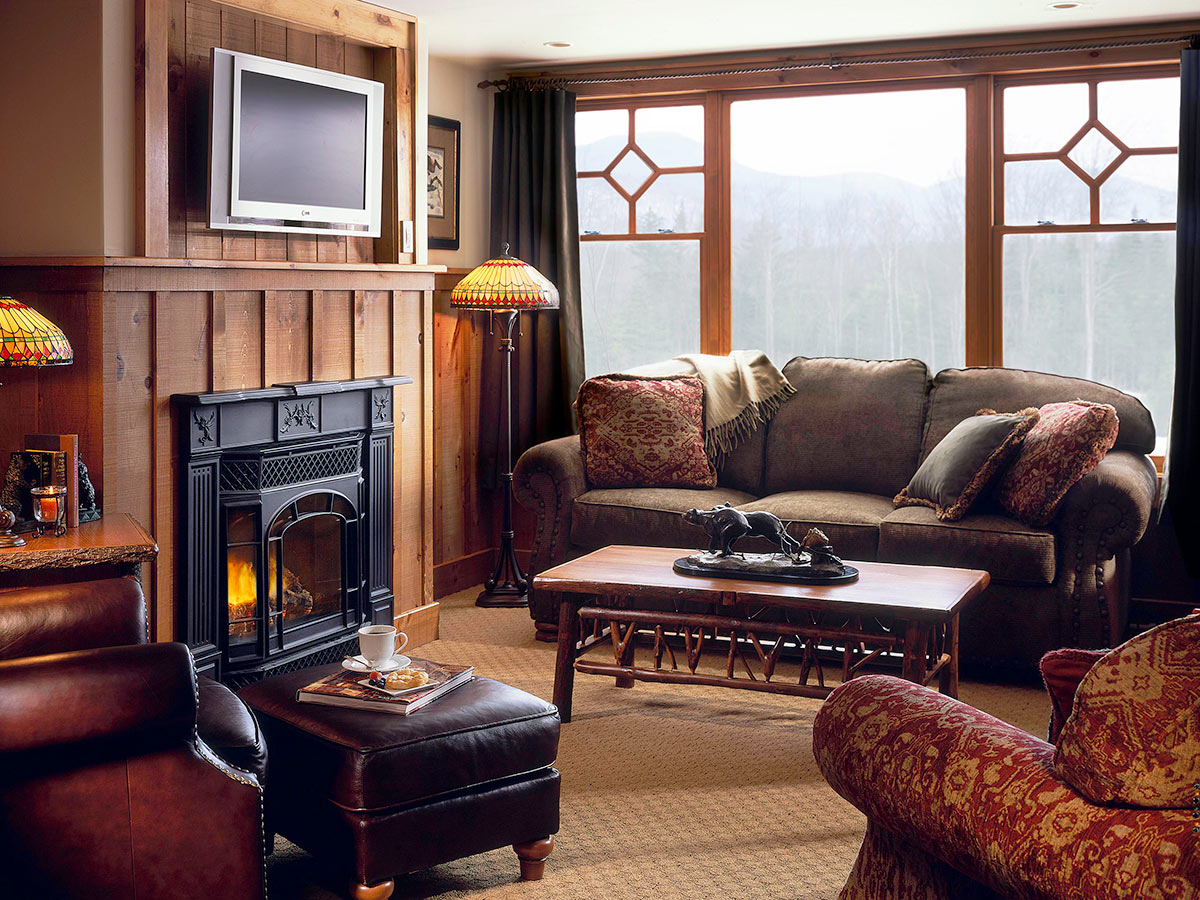 The weekend wrapped with delicious ales from Raquette River Brewing (and saucy wings from their partners at Arthur's BBQ); every dish and cocktail on the menu at Liquids and Solids in Lake Placid; and drunk banter about sports at Wiseguys down the road. All were highlights, if only for the novelty of trading the city for the slow pleasures of local malt beverages and impassioned conversation about fly fishing. (I promised a fellow drinker who looked and sounded like Mark Wahlberg that I would at least mention the sport, since the region is practically famous for it.)

I was certain about it before I left: I had been missing out on the Adirondacks. Over the days following, my mind would drift to the afternoon on the river, the summer camp memory that never was. The feeling of being connected to it all in the middle of nowhere. That alone was worth the five hours on the interstate.

From New York City, take Amtrak to Westport Station and connect via shuttle to downtown Lake Placid. Or take Adirondack Trailways from Port Authority and avoid the transfer. The easiest way to get there is by car, since you'll need one anyway.

Fall is becoming one of the most popular seasons to visit, but summer remains best for hiking, camping, mountain biking, boating, and fishing — schedule your vacation early or late in the season to avoid the family crowds. Winter attract tons of winter sports fans but can get really harsh. (Just don't expect locals to admit average temperatures qualify as cold.) Spring is a hit or miss, as most businesses close up shop for vacations lasting up to a month.

I stayed at Whiteface Lodge, a well-appointed 94-suite resort with rooms that resemble full-sized cabins just outside Lake Placid. There's a full-service spa, cigar-and-cognac shack, catch-and-release fishing pond, indoor and outdoor pool, hot tub, movie theater, and, among even more amenities, a fire pit for s'mores. The dining room is clad in woodwork and taxidermy and the bar program is excellent.

There is no shortage of off-road accomodations in the park, but the best bet for casual campers is to find a campground near Lake Placid, Saranac Lake, or Tupper Lake. If you're looking for an affordable homebase with four walls, rent on Airbnb. You won't have trouble finding one.

Off The Press: A Cider Scene Brews in New York
A Two-Hotel Hideaway in New York's Catskill Mountains