Maid cafes are no unusual sight on the streets of Akihabara, but there might be more than meets the eye. We sent writer Jack Murnighan to the popular Tokyo neighborhood to give us his first impressions.

TOKYO – If you spend any time in the Akihabara neighborhood in Tokyo — the famous "Electric City" — you'll no doubt see advertisements as well as real-life, in-costume hawkers for so-called "maid bars": cafes where the waitresses dress as maids and try to make patrons as comfortable as possible.

On first glance, I was completely creeped out by the simultaneous sexualization and seeming infantilization of the women. Most of the "maids" handing out promos on the streets were in very short, black, frilly dresses and white thigh-high stockings — the exact same outfits that you'd find at the local sex shop (in this case M's Pop Life). So why is anyone pretending that this isn't just fetish Hooters?

In many cases, I think that's exactly what it is, but there is more to it. The original maid cafe — Cure Cafe — opened in Akihabara in 2001 with a quite different agenda. They wanted to recreate a kind of Victorian comfort and class, and while their waitresses wear maid outfits, they are much closer to the period clothing of the time and are not overtly sexualized (i.e. the stockings go all the way up).

Cure Cafe was a success and bred followers, but the followers seemed to drift more and more toward some of the other enthusiasms of Akiba: manga/anime and idol culture. So the cafe fare went from traditional English tea service to anything you could draw animal faces on. The waitresses went from being quiet and sophisticated to being cutesy and over-animated. In most cases, the hemlines rose dramatically, the stockings stopped mid-thigh, and the "maid" costume blended into a naughty schoolgirl outfit so you could code it into whichever fantasy you preferred (see the baby blue outfits at the popular Maidreamin). Eventually maid cafes would emerge that were only open at night and had the hostess bar approach (you pay to have a woman stay and talk to you). Schoolgirl- and maid-themed massage parlors were not far behind — often in the same building.

It's easy to see what happened, and while I think it's fair to be a little skeeved out by maid bars in general, there is another side to them that you miss if you simply leave it at that. For one, the Japanese simply love costumes and they love everything cute. (Otaku is the Japanese word for obsession and moe for being especially into cartoon characters.) Around Tokyo, there are plenty of other themed establishments that mimic manga/anime: vampire, robot, Alice in Wonderland, etc. And the clientele of these — as with some of the maid bars — partially consists of girls. (Apparently they really want to have little bear faces drawn on their omelets — hard for me to understand, but true!) Nor can you turn on a Japanese TV without seeing more over-the-top cutesy-ness. Even on the plane ride in, there were many girls dressed in full schoolgirl garb, including one who had completely dollified herself. I don't think they were doing it to fulfill male fantasies; I think that's how they identify. 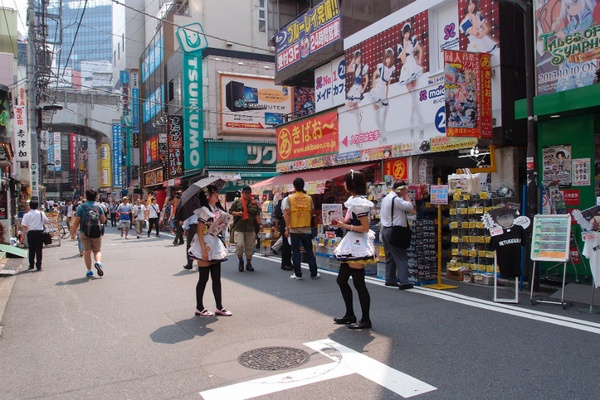 Furthermore, the maid cafes — and the themed cafes in general — are also popular with tourists and often with couples. Sitting in front of Pinafore, I saw quite a few pairs of foreigners checking it out or speaking to the maid out front. My sense is that they were intrigued by the oddness, not playing out some preexisting fantasy.

I even saw groups of business guys, both at the more risqué and at the not-at-all risqué cafes, that seemed just to be sitting there just doing work. And even if they chose to go to a maid cafe because of the maids, I have to admit that that's no different than me picking places to go write in New York because I think one of the baristas is cute.

All that adds up to a case-by-case situation. Yes, it can seem a little perverted to dress girls up so sexually and then have them act so child-like, and, yes, there are clearly patrons for whom that's a fantasy and it's being played out for them mid-afternoon. But there are others who just like the costumes, the cuteness, and the positivity — and putting sexual overtones on it would be inaccurate.

If a Japanese journalist came to a Hooters in the States, wouldn't he probably be a bit disturbed? But then wouldn't all the patrons step up to tell him they just went there for the wings?

What Are Genderless Danshi, You Ask? We Did Too
Shop Tokyo: 8 Souvenirs Beyond Chopsticks and Sake Sets
From Lolita Girls to Paper Cranes in Tokyo