Our fascination with traveling to Cuba persists, and will only increase as the easing of sanctions makes travel to the formerly forbidden country easier. Easier, that is, but not easy. Visiting Cuba still involves navigating quite a bit of red tape. Fashion stylist and blogger Nneya Richards returned from a self-planned trip where she explored the island and spent time volunteering. This is how she did it.

HAVANA, Cuba – Cuba has long been my dream travel destination — probably since I first watched Guys and Dolls as a child. The travel bug bit me early, and the thought of a night out with Marlon Brando in Havana always seemed wildly romantic. But soon I learned that such an evening would not be possible, not only because it was a fanciful Hollywood exaggeration but also because of things like rules, laws, sanctions, and pigs — things I didn't understand as a child.

When I got older, I enviously looked at the photos my European friends took on vacations to Cuba, exoticizing the island nation as one giant nostalgic, culturally rich and beautiful party. One that I, as an American, was not allowed to attend.

As sanctions against Cuba have begun to lift in the year as U.S.-Cuba relations are normalizing, visiting my "one day" destination felt more urgent. I had to get down there before "the change" — before the slow tidal wave of American consumer culture that will inevitably flood the island. Maybe because my mother and I wanted to atone for the future wrongs of the American tourist industry, we decided to go to Cuba and volunteer under a people-to-people exchange visa.

In other words, I finally got my long weekend in Havana, and here is how I did it.

While it's true that government sanctions have been eased, American citizens still need a visa and travel affidavit to enter Cuba. This means it remains illegal for Americans to travel as beachfront, mojito-sipping tourists. The Department of Treasury lists the permitted reasons to visit Cuba under the general license. There are twelve of them, including family visits, official government business, journalistic activity, professional research, professional meetings, educational activities, and religious activities. (See the full list and descriptions in the Treasury Department's Travel to Cuba FAQ under section II: Travel.)

You can apply for a special license if your reason doesn't fall under the stated requirements. Writers should note that although it is listed under the general license, "Journalistic Activities" require an application with the Office of Foreign Assets Control (OFAC) for a separate visa. The nice thing about the general license is that it's something travelers can fill out and print at home — thus self-certifying their travel. It's a smart idea to keep proof of travel and activities for up to five years after the trip. As I mentioned, rules and regulations are constantly changing, but your signed travel affidavit will state that you will only be engaging in travel-related transactions sanctioned under the licenses, and that OFAC has the right to request information on your travels.

Which category should you choose? I recommend the people-to-people visa, which is intended to facilitate cultural exchanges between the two countries. Many organized tours, like National Geographic Expeditions or Soltura Travel have based their programs around this visa for years, providing visitors with jam-packed itineraries filled with guides, meetings, and speakers. If tour groups aren't your thing, you can go my route and plan your own cultural exchange visit to Havana. I frequently travel for work as a blogger and, in an effort to see the most a destination has to offer in a short amount of time, my itineraries (prepared by my hosts) are packed to the brim, leaving little time to savor the moment or understand the experience. I did not want this to be the case on my first visit to Cuba. My mom and I weren't interested in sitting on the beach, so I knew we would make the most of every moment spent there. Most importantly, we wanted every minute to be our own. We wanted cultural exchange through volunteering, touring the sites, listening to the music, eating the food, and speaking to the people. 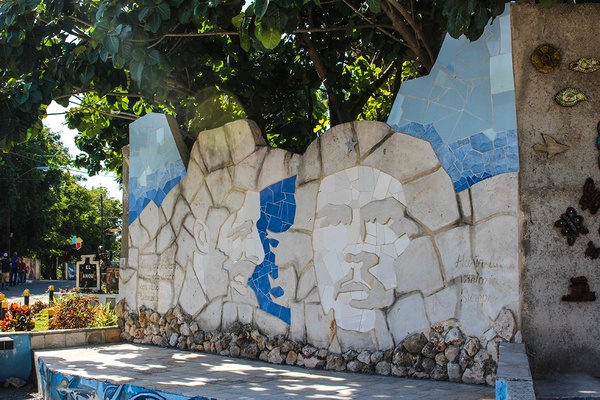 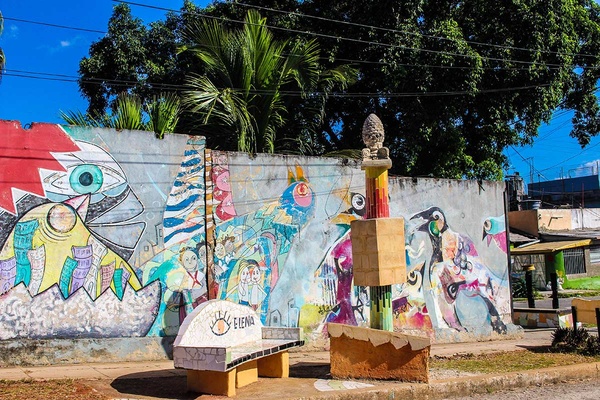 Earlier this summer, the news that JetBlue was launching direct flights between New York City and Havana made all the headlines, leading many to assume that it would be easy to book a flight.

Nope. JetBlue may be operating that route, but there is a reason the first flight was only half full: You must book through charter companies like Cuba Travel Services or the company I used, ABC Charters. At around $475 per person for an hour-long flight from Tampa to Havana (or from Miami), companies like these are your best bet. ABC Charters even guided me through my visa process once I explained what my mom and I would be doing. With their laid-back, "relax, we'll handle everything" attitude, I'd like to think ABC Charters was my entry point into the Cuban mentality for taking everything as it comes.

Finding a place to volunteer was the hardest part of planning my trip, harder than sorting out a proper place to stay. The advantages that companies like National Geographic Expeditions or InsightCuba have in planning acceptable people-to-people trips is their network of reliable contacts and their tried-and-trusted itineraries.

Email addresses for people on the ground are key for contacting people, as your American phone will not work and WiFi is still extremely limited. When you're actually in Cuba, it helps if you have access to a landline should you need to make any final arrangements in regards to your trip.

Within a few hours of searching the internet for volunteer opportunities that did not involve a travel group, I came to the realization that it would not be as easy as I had hoped. The volunteer culture in Cuba is not as organized as it is in the United States. One reason holds that the country lacks the infrastructure. Another, which I heard often, is that the Cuban government is unwilling to admit social flaws, which makes it hard to find organized volunteering initiatives outside the church. As a result, it is difficult to find volunteer opportunities that are not run by an organized tour. There aren't soup kitchens you can pop into or orphanages you can visit for an afternoon. I backtracked from a few itineraries I looked at when I was considering an organized tour when I stumbled upon Muraleando, a renowned arts organization in Havana that has revitalized the neighborhood of Lawton and empowered countless children and the community through their arts programs. I decided that was who we would work with while there.

To get a range of the accommodations Havana has to offer, we stayed at Casa Lilly, a casa particular, as well as the famous hotel Havana Riviera, where very little has changed since its 1950s heyday. Casa particulars are a bit like homestays or bed and breakfast: Cuban families rent rooms or apartments in their homes. These are even better than Airbnb rentals because travelers get to interact with Cuban families. We prefered the casa particular to the hotel: The room was more modern, it was considerably more affordable, and the level of access to locals was much higher. Both the casa particular and the hotel were located in the Vedado district, known for the beautiful old mansions that once housed oligarchs and embassies and today have been converted into museums, schools, and apartments.

We also had access to the famed Malecon, the waterside walkway that surrounds the city. To get to Old Havana, you can walk along the Malecon for about 45 minutes or take a short and cheap taxi. We spent most of our days touring the city on our own or with a guide we hired after meeting him on the Malecon. Usually I wouldn't recommend hiring a stranger, but we really clicked with Julio, a former teacher and pro-wrestler from Havana who knew everyone wherever we went. 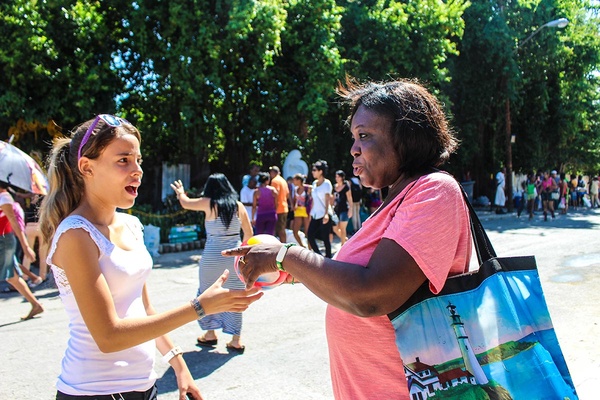 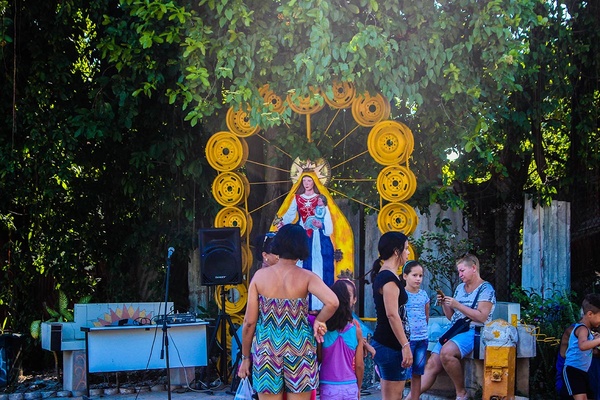 Muraleando has a great website. Jesus, the person who coordinates visits, got back to me within a few hours, which is not always the case, given how unreliable internet access is throughout Cuba. He sent an extremely detailed email about what my mom and I would be able to do with Muraleando on days of volunteer work and art classes, as well as a list of supplies that they could use and donations that they would welcome. You can email Jesus at muraleando@cubarte.cult.cu.

Jesus also informed me that our visit would coincide with Peña Comunitaria, a block party that Muraleando holds every six weeks with food and entertainment to foster neighborhood cohesion. The party while we were there was a celebration of the return to school. Jesus arranged for us to meet project organizers and artists Miguel and Yoan, who showed us around the center. While Muraleando receives some aid from the government, it is not enough to support the number of students they serve and the scale of their projects. Visitor donations are key to keeping the lights on at Muraleando.

The building itself attests to the resourcefulness of the Cuban people. The old abandoned water cooler and adjacent discotheque were transformed into the hub of their arts center, and nothing went to waste. Beautiful sculptures made from scrap metal dotted the streets, broken tiles formed elaborate murals along the walls of the Lawton neighborhood, and an old bathtub looked perfectly in sync surrounded by ferns in a Garden of Eden-like space at their headquarters. There is a Snoopy drawing by Carl Shultz himself, who stumbled upon the project center while touring Havana.

As they told us their story of revitalizing the neighborhood, we were able to meet many of the students, most on track for prestigious art schools in Havana, and tour the facilities. We bought artwork from resident artists to bring home. Rumba and mambo beats played in the background, while clowns and stilt walkers entertained the kids. The team at Muraleando was so appreciative and welcoming. I can't recommend a better organization for volunteering in Havana. You can go for a visit to learn about the organization or spend a few days volunteering in the classes. They have everything from painting to ceramics, and how you'd like to contribute is really up to you. It's an amazing way to get a feel for the real Havana, which is often kept separate from the tourist's Havana.