How to feel a sense of accomplishment in one day: Take a nine-and-a-half hour hike via Norway's Troll's Tongue, a grueling trek to what has been called The Scariest Instagram Spot On Earth.

NORWAY – It was 8:15 a.m., and I was lying in a hostel in Bergen, Norway, five days into a September road trip. It was a tiny room of four, the rain was pounding on the skylight, and unique odors were wafting up from the bunks below. Not just regular pedestrian hostel fare of stale booze and socks; these stale socks were something to behold. They belonged to a German man who had been traveling around by bike for three weeks — with all that scenery he had found little time to do laundry — and it was making me pine for a hot shower and my own bed back in Oslo.

This was just one of the angles I was using to talk myself out of hiking Trolltunga.

Aside from the exhaustion that results from sleeping in foreign beds with strangers (and not in a good way), I worried I was poorly equipped and lacking the fitness preparation required. All of these doubts were warranted. Trolltunga (Norwegian for "Troll's Tongue") is located in the Hordaland county of Norway and has been deemed "the scariest Instagram spot on Earth" by The Huffington Post. Since the age of social media, the number of people taking on the 22-kilometer hike (11 km each way) increased from five hundred a year to several thousand. Not once has it been described as anything less than difficult.

My inner voices jousted for a good hour, but the end result was a well-fought draw. I decided to go by the hiking store, ask a few questions, get the ferry through The Hardanger Fjord to Rosendal, then jump on the 900 bus to Odda and take it from there. I was becoming about as blasé about fjords as I was about churches in Italy: Seen one, seen 'em all. (I was feeling Troll's Tongue-in-cheek.)

First stop was the hiking store. I was very close to buying some boots, but was reluctant, as hiking with brand new shoes worn for nine hours the first time around seemed like it could pose some problems. I asked the salesman whether people hiked up in the shoes I was wearing (Solomon Cross trainers with spikes), and he said they were very common. Then I asked him about Lycra leggings with shell hiking pants and a fleece with a Haglof's parka. He seemed to think I was perfectly equipped, especially after I informed him of my intense daily fitness regime of waitressing. He told me twelve-year-old Norwegian kids did this shit for breakfast, and I was like, "Screw all you blonde, beautiful, fit people." 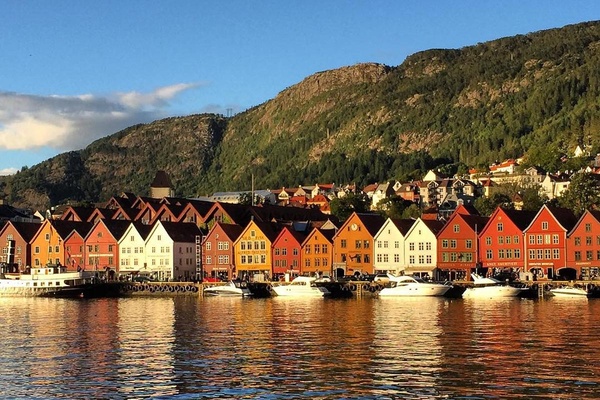 So off I went to the picturesque Bergen Wharf to catch the ferry. I bought my ticket on board and shelled out the requisite fifteen euro for a stale sandwich and filter coffee. (I had to ask for milk and sugar, as the Norwegians drink it black.) The scenery was standard (by Norway's once-in-a-lifetime standards), but I was particularly taken by the villages on the fjords.

After the boat ride, I stopped in Rosendal before catching a 35-minute bus to Odda. I was the only person on the bus, and the driver was playing German folk music. For a second, I was confused as to where I was, but it was only a moment. As a solo traveler, the pinnacle of quiet time is on a bus, entirely alone, sucking up the beautiful scenery, on the road to a challenge.

When I arrived in Odda, two traveling companions from earlier in the week were waiting. Lovely, sweet, twenty-something Belgian guys. When I saw them, my doubts were gone. "The last thing we wanted to do before we left was have a beer with you," they said. I wasn’t so alone with my thoughts anymore, and this was a pleasant change.

"Do you think I can do this?" I asked, looking around at the animated faces of hikers eating pizzas around me. They didn't even have to answer, as I knew that tomorrow I wanted to feel like these people looked today.

Next came grocery shopping, as there are no snack bars along the way (are they kidding? along 22 km of hard work trails?). I went a smidgen overboard on the my packed lunch, buying a whole chicken, two loaves of bread, yogurt, eggs, salami, cheese, mayonnaise, chocolate, and cookies. (To list half of it.)

I then got a taxi to the apartment which I had found effortlessly when I arrived. I went into the tourist office, found a place I liked, called a number, got a code from a lady for an apartment in Tyssedal, a town closer to the entrance to the hike than Odda, was told I was welcome for the few nights and to leave money on the table when I was done. Very trusting. I don't think she even asked my name. I considered informing her that I was Australian and that we had a tendency to be marginal, but I refrained.

I think the sun had just risen when I woke up, but I wanted to get the first bus just after 7:30 so I could begin my hike by 8. The boys had told me that it had taken them nine hours: four to hike up, two to take in the scenery, three hours back. Since I wasn't a 20-year-old boy, I guessed I would need five up and five back, with three at the top to catch my breath. They also warned me that the first and last sections of the hike were the hardest. A funicular used to take hikers up the initial steep incline, but all that's left are its remnants, as if to mock me. 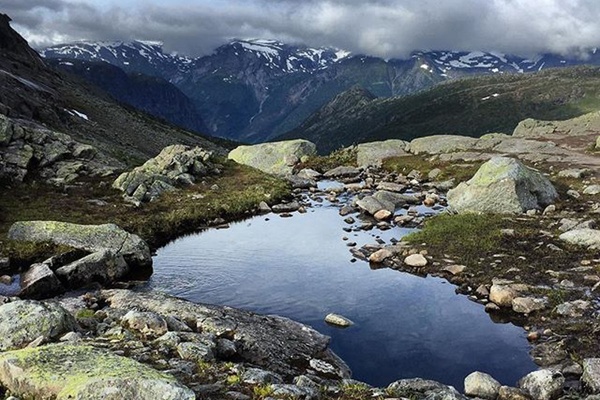 So off I powered, all gumption and focus. No map or compass and no tour, as I had been informed that none of the above were required. Not only would I find a constant stream of people to guide my way, but there were red arrows at what seemed like every ten meters. Near the top of the first section, I started chatting to an American scientist from Pasedena, and, with an unspoken agreement, we became buddies for the day.

The hike had a total altitude gain of 900 meters, most of which occured in the first one and a half kilometers. But by no means was the rest easy, and I was constantly aware that I would be coming back the same way. I went through glacial potholes, sludge, snow, puddles, mud, past lakes, over sheer rocks, along ridges and a valley of rocks. Every section was different and more powerful than the last, but all the while I was slightly distracted wondering if I was even going to walk out onto the tongue, and if I did what was I going to do? There was not a chance that I was going to sit on the edge. Ever.

I rarely stopped (more training from waitressing, as I ate on the run) and we reached The Tongue at 11:45. It was still relatively quiet, so the queue to get a photo was only fifteen minutes. But not 30 minutes later, after I had taken my hiking buddy's photo, the queue was an hour long. Many watched as people went out. There was cheering as people did yoga poses, danced the tango, cracked open a beer, held a flag, and posed with their significant other, whether it be a tiny pooch or the apparent love of their life. Some people were downright stupid, getting too close to the edge without caution, and I felt that they were not taking this extraordinary nature seriously. In any other country in the world, some authority would be monitoring this and there would definitely be barriers in place, tainting this amazing beauty.

I still hadn't decided whether or not I was going to go out on the Tongue. After descending a ladder to the waiting area, I concluded that much of it was an illusion. It was much wider than I had thought and had a slight incline so I could not see over the edge. I strode confidently out and lay on my back. But I was still not afraid and decided to go and have a look over the edge for a second (with an elegant worm-like approach on my stomach). I then retreated, joined my companion, approved the photos, and prepared to walk down. To be honest, even though the scenery at The Tongue, overlooking Lake Ringedalsvatnet was incredible, I had seen so many photos of it that I was more excited about the rest of the hike, the achievement of it all. I also gotta say, something is taken away from the serenity of hiking when the destination resembles a university mixer. Multiple outfit changes were not uncommon up there. 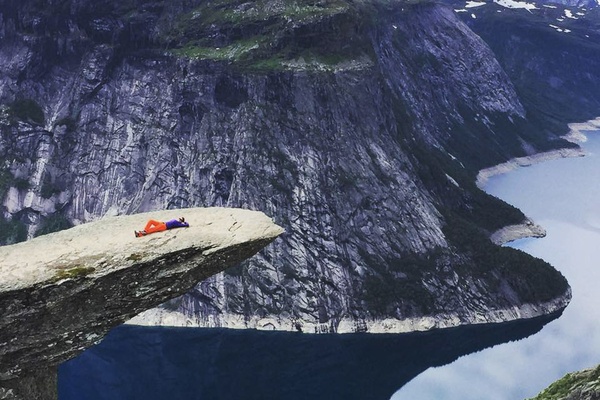 Splayed out on Trolltunga — for the money shot.

Walking back to Skjeggedal, the starting point, the scenery was even more dramatic. Even though it was the same landscape, everything was much more accentuated due to my rapidly fading energy. There were hills I could not remember, sections that seemed longer, paths that were that much more slippery. I also noticed that I was not the only one fading. People were stopping more frequently for breaks. There was none of the banter from earlier in the day.

With three kilometers to go, I was in pain and realized there was no way I was going to descend faster than I had ascended. My hiking buddy was still going at a fair pace, so I told him to stop waiting for me. "Go ahead without me! There is no point, I am not going to make it. Save yourself," I said as I dabbed my brow and contemplated a cookie. Perhaps more accurately, I didn't want to feel any pressure to go faster, as with my tired legs I needed to be more cautious.

The last section was an absolute bitch. I had thought it was bad on the way up, but the pain I was feeling, combined with the muddy ropes and the fading light, caused me an hour of hell. I felt like I was in slow motion. Even when I could see the bottom, I knew I had another half hour to go.

But I made it. My first order of business was the bathroom. When you're a woman, you cannot just whip it out and relieve yourself. (Finding a discreet rock wasn't an option given the landscape.) My next order of business was to take my shoes off. They had served me well, but, oh, how I hated them at that moment. The feeling of taking off my trainers was akin to taking off ski boots at the end of a long day. So. Damn. Good.

After a cold, hard-earned beverage, we got the bus back to Odda and went straight for pizza. After nine-and-a-half hours outdoors diligently burning calories, the cheesy goodness of a hot pizza was almost as good as taking off my shoes. I was no longer exhausted. I animated and proud, just like the hikers before me.

This story originally appeared on Eurotash and is reprinted here with permission.