This post was produced in partnership with American Express, part of Pavia Rosati's role as a Platinum for a Year Ambassador.

At least once a month, it's travel day. You know what that means: schlepping, waiting, hassling, and haggling. It's the entry price for a life of globe-hopping, and I'm happy to pay it because the payoff is always worth it. New places, new flavors, new friends, new experiences for the insatiable memory bank.

Still. I wouldn't mind if the journey itself was better. Easier, cheaper, smarter. Less stressful, more comfortable. So on a recent travel day to London, I pulled out my new American Express Platinum Card, a card I'm getting to know as a Platinum for a Year Ambassador, and I put it to the test. Here's how it went.

I'm useless this early in the morning, and I don't want to think too much about getting to the airport. That said, I'm happy to be clever about it. Because my card is synced to my account, I'm earning 2x the points on the Uber ride to the airport. As soon as I have enough points, I can use points as credit to pay for the trip. (The same system also works with NYC taxis.)

Even when I travel light, I prefer checking my bag. Lugging a rolly terminal to terminal and jockeying for overhead compartment space degrades the human experience. So I check, and deduct the inevitable baggage fee from Platinum's annual $200 airline free credit, a credit I can also use to pay for in-flight snacks, phone reservations, and the other charges we hate paying for.

Yay. The security line is about two miles long. Only it's not for me, because I enrolled in Global Entry. Which American Express Platinum paid for. Which gave me approved TSA Pre-Check status. Which means I get onto a much, much shorter security line. Which means my liquids and laptop stay in my bag and my shoes and belt stay on my body. Which means I'm through security in five minutes, not 45.

7 a.m. Chilling in the Lounge

No time in security means more time in the terminal, and that's time that needs killing. Platinum gives me access to Delta Sky Clubs, Priority Pass Select, Airspace Lounges, and the new Centurion Lounges at San Francisco (SFO), Las Vegas (LAS), Dallas Fort Worth (DFW), and New York - LaGuardia (LGA). Miami is opening soon. I was at the opening of the SFO Centurion last fall, and it's quite a place. Perry Street chef Cédric Vongerichten, the current guest chef, prepared an all-day menu of burrata on crostini and ginger rice with pickled vegetables. Mixologist Jim Meehan designed the cocktails; sommelier Anthony Giglio picked the wines that are served from a special tasting dispenser.

JFK doesn't yet have a Centurion lounge, so I checked into the relatively new and definitely swank Delta Sky Club. I poured myself a strong coffee and went outside to the striking Sky Deck to watch planes take off. A preview of things to come. 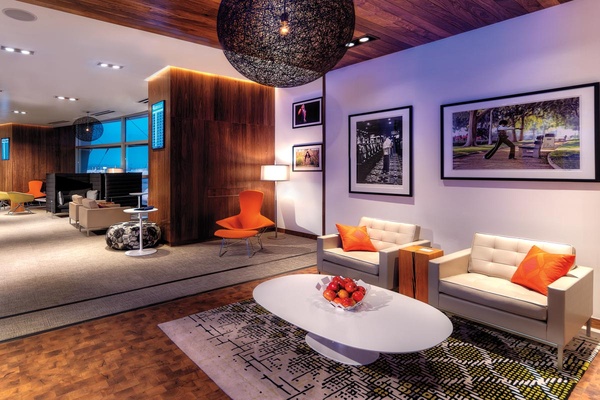 The Centurion Lounge at the airport in Las Vegas. Photo courtesy of American Express. 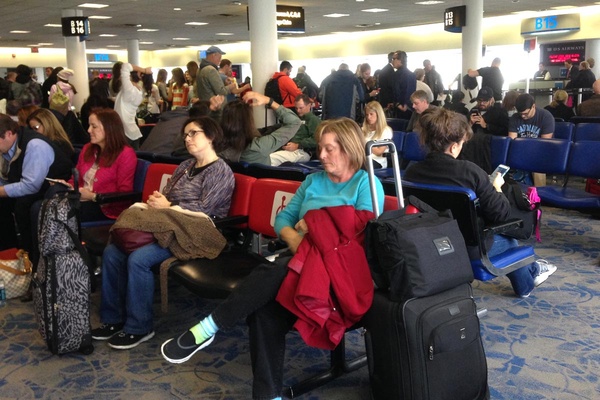 And there's this. How would you rather spend two hours at the airport? Photo by Pavia Rosati.

So now I'm at the whole point of travel day: the journey. And there's only so much that you can do in a confined space 35,000 feet in the air. But as long as I have my iPad, there's no getting bored. I used the 20 minutes at the gate waiting to board to download enough episodes of Friday Night Lights to keep me entertained for the duration of the flight. Platinum card members have unlimited access to 1 million Boingo Wireless hotspots all over the world — airports, shops, and hotels. The Boingo app tells me when I'm in a hotspot and how trustworthy the connection is.

8 p.m. Dashing Off into New Lands

I'm heading into the countryside and renting a car for the ride. I skipped the line at Hertz and got a nice upgrade to boot. (The same privileges apply at Avis and National Car Rental.)

I survived the travel day, as I always do. I just did it feeling a little smarter — and a lot more unruffled.

Find out all the benefits of the American Express Platinum Card.