A new year means new trips and new discoveries. The possibilities are endless.

Highlights:
- A Day in Downtown: An itinerary for the English countryside inspired by the Emmy award-winning TV series Downton Abbey.

- Relishing Rome: Lee Aitken shamelessly eats her way through the internal city while compiling a list of locally loved restaurants — from a mozzarella bar to a regal villa at the edge of the Borghese Gardens.

- Hello, Chicago!: With a plethora of new epicurean options to enjoy, nobody's going hungry this winter. 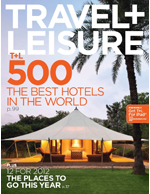 TRAVEL + LEISURE
On the cover: The T+L 500 lists top hotels around the world as picked by readers. Favorites include West Virginia's The Greenbrier and Hawaii's Four Seasons Resort Hualalai.

- Twelve for 2012: A dozen destinations to check-out in the new year, including culturally buzzing Guimaraes, Portugal and the newly peaceful Sri Lanka.

- Pizza Quest: Food critic Anya von Bremzen recounts her journey to Italy in search of the best pizza city: Rome vs. Naples. We wont spoil the surprise, but take note — it was a very close competition.

BUDGET TRAVEL
We covered the December/January issue in our December roundup, but here it is again.

On the cover: Melinda Page discovers the lesser-known, more affordable side of the Seychelles, where beachside apartments go for $125 a night.

- Top Budget Travel Destinations for 2012: Explore baroque churches, black-sand beaches, and crater lakes in the Azores, one of Nicole Frehsee's picks for 2012.

- Road Trip: La Ruta Panoramica: Take a spin on Puerto Rico's answer to Route 66. Josh Eells uncovers the island's quieter side, where the road is laced with waterfalls and horses out number people. 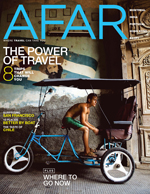 AFAR
On the cover: Majka Burhardt explores Havana by night and breaks the rules climbing Cuba's karst mountains by day.

Highlights:
- The French Connection: Sibling dynamics are on full display as writer Matt Gross recounts a winter trip to Montreal with his younger brother Steve. 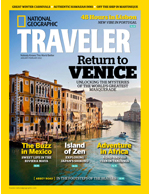 NATIONAL GEOGRAPHIC TRAVELER
On the cover: Sheila Buckmaster shares details of her annual pilgrimage to Venice for Carnevale, where she joined in the festivities dressed as Charlie Chaplin.

- The Buzz in Mexico: Melina Gerosa looks out for the Melipona beecheii bee.