A few years ago in his Fathom Questionnaire, Josh Abramson said he was dying to go to Bhutan. He just returned with great intel on where to stay and what to expect.

BHUTAN – Bhutan is a fairly ambitious destination if you live in the United States. My wife Gabrielle and I flew 16 hours direct from New York City to Delhi, followed by a long layover before our two-hour flight to Paro in Bhutan, and finally a 90-minute drive along bumpy mountain roads to get to our hotel in Thimphu, the capital.

We decided to leave our 20-month old daughter at home for this trip, and I couldn't have imagined it any other way, as we were completely exhausted from the travel for most of the trip. We both failed to account for the debilitating combination of 11 hours of jet lag coupled with spending our first few days at an elevation above 9,000 feet.

It's an understatement to say that we felt pretty awful for the first three or four days, and the five-hour bumpy mountain drive to Punakha on day three certainly didn't help. There is only one narrow road that leads to Punakha from Thimpu, and it's currently under construction in an attempt to widen it to a more modern standard. Based on the limited resources on the scene, I would assume that the road will be under construction for the next ten years, so visitors should brace themselves for many long and uncomfortable drives. The rough drive notwithstanding, Punakha was the most beautiful part of Bhutan that we saw. The balcony room we had at the Uma Punakha was one of the most special hotel experiences either of us have ever had. 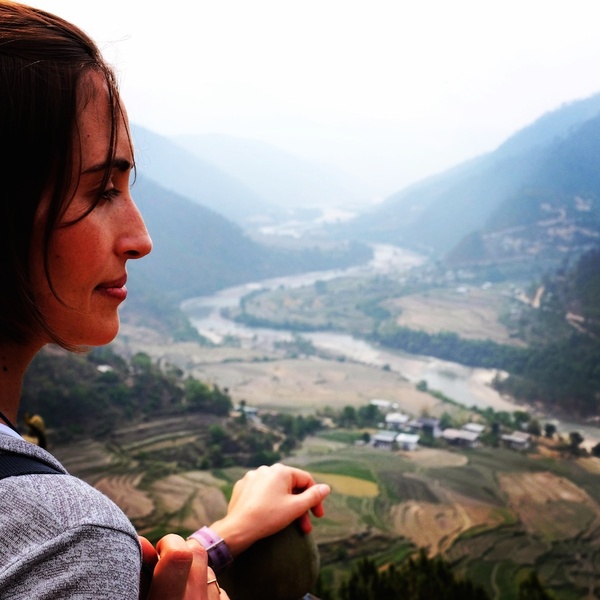 Gabrielle on the balcony at Uma Punakha. 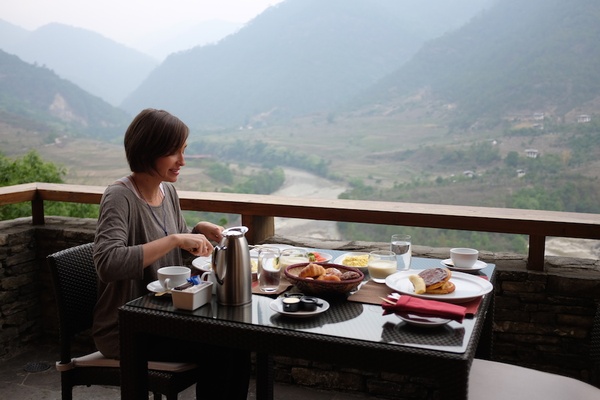 A hotel breakfast with a view.

THE HOTELS: UMA VS. AMAN

The nicest hotels in the country are operated by the luxury brands Aman Resorts and COMO Hotels. We stayed in four different hotels in Thimphu, Punakha, and Paro — the two Uma Hotels, Uma by COMO, Punakha and Uma by COMO, Paro, and two of the five Aman properties, Amankora in Thimphu and Paro.

Anyone who has ever been to an Aman Resort knows why many consider it to be their top choice anywhere in the world. I mean, they are Amans — extremely nice hotels with unbelievable attention to detail. That said, the two we visited in Bhutan were slightly cold and sterile, especially when compared to the Como Hotels. Perhaps most significantly, the Amans feel a bit too removed from the local culture, as if they could be anywhere in the world. Their design and sensibility is just a little too modern for a place like Bhutan.

What really stood out was the differences in the staff at the various properties. Everyone working at the Uma properties seemed genuinely interested in being our friend, and as a result we ended up having real conversations with many of them. In contrast, the Aman staff always seemed slightly nervous, almost as though they worried they would lose their job if they didn't say and do the exact and perfectly right thing.

As far as ambiance is concerned, evening at the Amans consists of quiet traditional music that played nonstop while we tried to keep our voices down. At Uma, there was always a nicely curated mix of music, similar to what I'd expect from a chic hotel on the Mediterranean. The Amans can feel a bit isolated at times, especially in Thimphu where they "don't recommend" walking around the property. We felt a bit like prisoners during the first day of our trip at Amakora Thimpu. We had nothing on our itinerary for the morning, and the hotel "didn't recommend" leaving the property on our own. There was literally nothing to do at the hotel except to eat or go to the spa.

It's also worth mentioning that we liked the food more at the Umas. When you consider that the Amans cost $1800 per night and the Umas cost $600, it's really a no-brainer, as the Umas really hit the right note on pretty much everything. 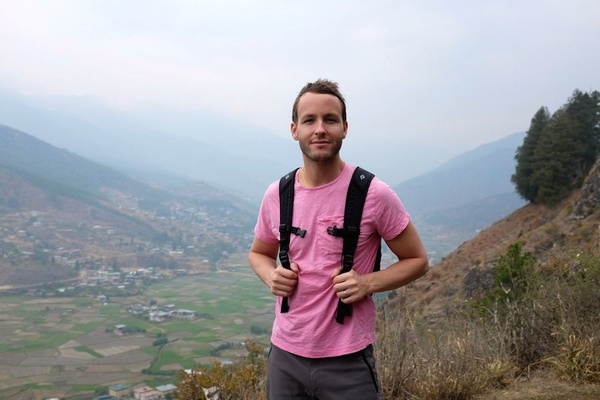 Josh on a hike through the countryside. 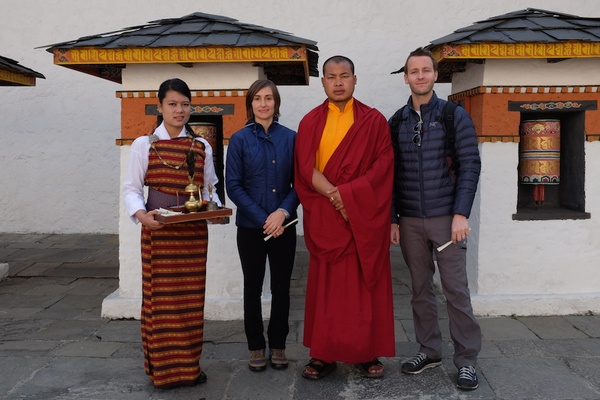 Josh and Gabrielle at a temple visit.

Truth be told, despite how amazing all of these hotels are, you really wouldn't want to stay in any of them for more than three nights. Any more and you'll be bored to tears. Moving around and staying at a few different properties while you're in Bhutan is a must. We did our tour in a pretty good order. The drive to Punakha really is rough, and we were glad for a few days to settle before tackling it. (But you can't skip Punakha.)

Every day in Bhutan was pretty similar. We would wake up, enjoy the beautiful surroundings while having a nice breakfast in the hotel, and then leave with our state-mandated tour guides to hike for a few hours around the countryside. Some hikes were more ambitious than others, but none would be particularly challenging for anyone in reasonably good shape, especially once you've adjusted to the altitude.

The scenery is more than worth it. Everything is beautiful: the pine forests, the farmland filled with rice terraces, even the temples. Many of our hikes included tours of a temple or two, which allowed us to take a closer look at the deep spirituality of the culture. Punakha is the most lush, fertile area with the most gorgeous farmland.

Afternoons were spent relaxing, at the spa, and doing yoga. While the local cuisine was interesting to try, it got old pretty quickly, so fortunately every hotel also offered a Western menu. Dining at the hotels allowed us to chat with other guests about their experiences in Bhutan. But we were exhausted from our tours and crashed early most nights. If we could make it through a movie, we'd watch a DVD at the Uma hotels. The Amans don't even have TVs.

Going to Bhutan feels like stepping into a time capsule from 100 years ago, especially as you walk through the farmland. Increasingly, this is a kind of experience that gets harder to find anywhere in the world, which explains Bhutan's ever-growing popularity. The Bhutanese government is doing what it can to balance preserving its culture and welcoming visitors while limiting tourism through measures like high daily tourist fees and state-mandated guides.

We spent a lot of time with our guides and drivers and met locals in shops, restaurants, and hotels. They gave us so much insight about the country's culture and spirituality. The people were consistently lovely and the natural beauty of the countryside is among the best in the world. Bhutan is a singular, quiet, and meditative pleasure.

FLY: It's a hike, but you can get from New York (JFK) to Paro (PBH) with only one or two stops. Virgin Atlantic, Turkish Airways, and Emirates all have options.

VISAS: All visitors require a visa.

TOURIST FEES: The minimum daily package costs USD $200 per person per night for January, February, June, July, August, and December and USD $250 per person per night for March, April, May, September, October, and November. This includes: a minimum of 3-star accommodations (4- and 5-star will cost more), all meals, a licensed Bhutanese tour guide, all internal transportion (excluding flights), camping equipment trekking tours, all internal taxes and charges, and a sustainable tourism royalty of $65, which supports free education, healthcare, poverty alleviation, and building infrastructure.