Journalist and memoirist Alyssa Shelasky is a longtime friend of Fathom, having written for us many times over the years, always with characteristic charm and honesty, whether praising the basic hotel or sharing why it's so good to be in love and in Venice. Her excellent new book, This Might Be Too Personal, is a few hundred pages of her signature wit and big-hearted emotions, a collection of essays that recounts her journey through motherhood, love, work, and life. She lives through adventures and pitfalls with lovers and losers and a few celebs along the way in NYC, LA, and around the world. In this excerpt from the chapter titled "May You Be Happy," Alyssa recalls a bawdy press trip to ritzy Zurich and Gstaad, which she just so happens to have written about for us, should you want to read even more about how she was spoiled rotten in Switzerland in a frenzy of girls-gone-wild debauchery. We we devoured the book two days; our only wish that she had shared a few hundred more pages. Read it on the beach, on your next flight, along your daily commute, or on your sofa. It's a joy to be transported into Alyssa's mind and heart.

There was a naughty mom, a Beverly Hills diva, a seventy-five-year-old socialite, and me, and we were all late for the Fondue Tram.

We were in Switzerland — where you’re not allowed to be late for anything, especially that which includes gooey cheese melted on crusty bread on a stick — for a press trip, an all-expenses-paid and no-expenses-spared “mini-vacation” for select journalists. The way it works is: A publicist invites you on a press trip to, say, Dijon, France, to learn about mustard, or Newport, Rhode Island, to rock out at the Newport Folk Festival. Everything is “comped” — flight, hotel, meals, drinks, spa, etc. All you have to do is guarantee that you’ll write about whoever’s footing the bill, which is either the city, the region, or maybe a high-end hotel with a big marketing budget.

Traveling through Europe as a travel writer was meant to serve two purposes. The first: self-repair. It was time to rest and digest after publishing Apron Anxiety. The book took a toll on me. I felt like I had literally written my heart out. And the second: I hoped that moving through Europe would be a transitional journey into the next chapter in my life. A transition into what? I wasn’t sure yet. All I knew was that I was searching for answers on how to find love and have kids while still being me. And if I could conduct that search while sunbathing on the edge of a beach cliff in Croatia? Sign me up.

Which brings me back to the Fondue Tram. Being in Switzerland, I was on a highly organized and structured press trip with a tight schedule, implemented under the close, watchful eye of a Swiss tour guide named Thérèse. Thérèse was not particularly, shall we say, chill. A good way to describe her might be “pleasantly hostile.” And yet, she wore mala beads and mentioned her meditation practice more than once. I couldn’t put my finger on her. All I knew was that she was a Swiss Buddhist enigma, and she hated us.

Part two of the trip included a few nights at the iconic Gstaad Palace, where a Coca-Cola is $42 and European royals would sit next to us at lunch. By now Thérèse thought we were all monsters and wanted to strangle us with her mala beads, so to up the ante, I set up online dating accounts for us four girls to toy with on our off hours. We were all single, besides the naughty mom, who was about to get divorced, and starved for hot sex.

Per Thérèse, we journalists were expected to be punctual and professional, and rightly so! We were guests in this lovely country. The only problem was that we four girls — the naughty mom, the diva, the socialite, and me — wanted to be bad. We had incredible alchemy from the moment we met at the Zurich airport, which no one could have expected, as writers on press trips often can’t stand each other. Not us. We instantly went from complete strangers to soul sisters. Our collective spark was so alive that we were nothing short of high, out of our minds, on life together.

“It’s a goddamn press trip, not a female penitentiary,” the naughty mom snorted as we made our first loop around a particularly regal area of Zurich, wet raclette dripping down her pumped-up lips. Read: hero.

They all were my heroes. She was already plotting some hotel room tryst with the piano player from the lobby. The diva, who refused to walk anywhere, not even a few feet, was on an obsessive-compulsive quest for a white mink muff. The seventy-five-year-old socialite was as majestic as Elizabeth Taylor, though she kept getting runs in her “hose” — and every time she’d say “hose,” the four of us, herself included, would spit out our birchermüesli dying laughing. The ladies and I toured the entire city having epic laughing attacks, guffawing over absolutely everything and nothing, and it was pure travel magic. At one point, I had such bad carsickness (a lifelong thing) that I was cackling AND puking from the floor of our van, and I genuinely believed I’d gone insane.

Part two of the trip included a few nights at the iconic Gstaad Palace, where a Coca-Cola is $42 and European royals would sit next to us at lunch. By now Thérèse thought we were all monsters and wanted to strangle us with her mala beads, so to up the ante, I set up online dating accounts for us four girls to toy with on our off hours. We were all single, besides the naughty mom, who was about to get divorced, and starved for hot sex.

None of our Swiss lovers panned out, but they all made for great material. Mine was a boy named Pere, as in the produce called “pear,” and though we had no chemistry whatsoever, the girls and I sure had fun with his name over our fruit bowls the next morning. Oh, we were awful. We crashed a private Duran Duran concert in our pajamas, and the police came. We told a bunch of handsome oil tycoons — who were not even looking in our direction — that we would never, ever fuck them because they were ruining our planet. Everything we did was rude and inappropriate, and though we were all classy ladies back in the real world, in Switzerland we just could not help ourselves. Thérèse, clutching her positive energy trinkets, regretted the day we were given passports.

On our last night in Switzerland, Thérèse instructed us to dress warm, wear our snow boots, and meet outside the hotel at eight p.m. for a little surprise. It was dark out and freezing, but the diva had triumphantly purchased her white fur outerwear and the rest of us were all layered up. As we followed Thérèse into the woods (with the diva on my back, all ninety pounds of her, not including the mink), we had no idea where we were going. In transit, the naughty mom handed each of us our own little flasks filled with brandy. She even gave one to Thérèse, who did not have to think twice about drinking.

After a ten-minute trek through the woods, with our heart rates up and our boots crunching through the snow, there was a large opening in the trees. An elegant horse-drawn carriage stood there awaiting us. It was like we had walked into a dream. Thérèse said we were heading through a mystic forest to ultimately land at a small log cabin in the countryside, where a rustic home-cooked meal would be served to us in front of a fireplace. We cheered and jumped for joy! One by one, we hopped into the back of the royal carriage. We were so excited that Thérèse had planned something so special for us that once we were all nestled in, we each found a way to hug and kiss her, whether she liked it or not. Turns out, she quite liked it. She was relieved that we loved the surprise so much. Then the five of us went dashing through the snow, laughing all the way.

After we dismounted the carriage, Thérèse asked us all to stand on our own two feet, take a deep breath, and be still. We were surrounded only by the trees, snow, stars, moon, mountain air, and womanly energy. She asked us to close our eyes.

“Is this where she murders us?” the socialite whispered. “Because I kinda thought she liked us now?”

Confounded, I looked at her and shrugged.

“I said close your eyes, you crazy bitches,” Thérèse commanded again, and this time, I knew indeed she liked us.

For the first time since landing in Switzerland, we did what we were told. We closed our eyes. We centered our bodies. We breathed.

“Repeat after me: May I be happy.”

May I be happy.

May I be healthy.

May I be safe.

May I live with ease. 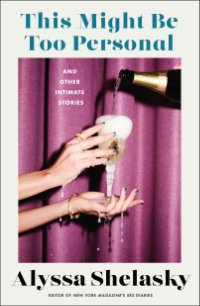 Buy This Might Be Too Personal from your preferred bookseller: Bookshop.org or Amazon.com.

From This Might Be Too Personal by Alyssa Shelasky. Copyright © 2022 by the author and reprinted by permission of St. Martin’s Publishing Group.