Writer Ellis Avery lived in Paris while working on her new novel, The Last Nude, which was inspired by Jazz Age artist Tamara de Lempicka. Ellis followed Tamara's path and that of other artists around town.

PARIS – The glamorous painter Tamara de Lempicka lived Paris in the 1920s. I lived in Paris in 2008 while writing my de Lempicka novel, The Last Nude. My partner Sharon Marcus, a scholar on sabbatical, spent her days researching Sarah Bernhardt in the theater archives of the Bibliothèque Nationale, while I spent mine in our sublet apartment, finishing the first draft.

Born in Moscow to Polish parents in 1898, art deco dynamo de Lempicka made her home in Paris while creating the paintings that defined the emotional and iconographic world of the Jazz Age, from the icy decadence of her 1925 Portrait of the Duchess de la Salle to the glamorously controlled horsepower of her 1929 Self Portrait in the Green Bugatti to the frank sexual declaration of her 1927 tour de force, Beautiful Rafaela. De Lempicka spent her Paris years in two homes, the first on the Right Bank and the second on the Left, both of which I made sure to visit.

She lived for most of the 1920s in the Sixteenth arrondissement, not far from Bois de Boulogne, the site of her initial encounter with the narrator of The Last Nude, the girl who modeled for Beautiful Rafaela. Tamara's street, rue Guy de Maupassant (Écrivain, the street-sign plaque told me, 1850-1893), lies a stone's throw from Place Tattegrain (after George, 1845-1916, a painter, and Francis, 1852-1915, a sculptor). Surrounded by apartment buildings designed to look like mansions, built up in Proust's time by wealthy-come-latelies from Central Europe, I felt like I was threading my way between cliffs of money, their ornately carved surfaces pierced with mahogany doors. I began to imagine a time, not long ago, when those gorgeous façades might not have seemed nostalgically gracious but rather oppressive.

In contrast to the monolithic domestic architecture of the nearby boulevards, Tamara's little block-long street offered a bakery, a butcher shop, a grocer's, a florist, and a Lebanese restaurant. Her building, #5, like its neighbors on street and boulevard alike, was faced entirely in the limestone pierre de taille that gives central Paris its uniform white-gold cast, and carved, like the rest of them, with the fruit-and-flowers scrollwork that can make every block of Old Paris feel like a sheet of cream-colored toile de jouy.

So this was the real Tamara's real apartment building, a butter cake among butter cakes. The third-floor windows stood open: I saw generous square rooms communicating with each other via French doors, punctuated with French-door windows that opened onto tiny flowerpot balconies. I grinned: This was just how I'd imagined the place. When I turned the corner a block away, the Eiffel Tower snapped into view, right there at the end of the street.

By the age of thirty, Tamara had made a million dollars — 1920s dollars, moreover — from her work. Just four years after her Salon d'Automne triumph with Beautiful Rafaela, de Lempicka moved from the Right Bank to the Left into a Mallet-Stevens house built to her exacting specifications. Rue Méchain (after Pierre, 1744-1804, an astronomer), in the Fourteenth, was not a familiar street to me, but I found it on a map. Also just a block long, it ended at the Observatory, the gardens of which seemed to burst out like a pale green tongue from the base of the elegant Jardin du Luxembourg. Well done, Tamara!

The ubiquitous five-story apartment buildings of Haussman's Paris lined Arago (after François, 1786-1853, a physician), the boulevard that led to Tamara's neighborhood. However, only some of them were faced entirely in golden pierre de taille. Here in the Fourteenth, many buildings were faced in limestone only up to the first story, then in cheaper brick the rest of the way up, while some were faced entirely in brick. I passed Cité Fleurie, a long, single-story bank of skylit studios for artists (Gaugin and Modigliani, among others) built in 1878 and designed to look like a single, endless, Swiss chalet. I saw the grim wall of La Santé prison, squat as a medieval keep. Tamara's street ended in another stone wall, above which bobbed the buoyant dome of the Observatoire. You could, indeed, walk north with the Observatory wall on your left and eventually reach the Luxumbourg Gardens, but this was seriously the wrong side of town. 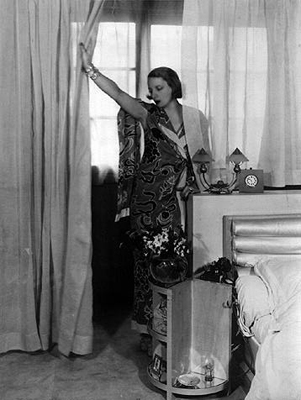 Why had Tamara left her flat in the bourgeois Sixteenth for this neighborhood? Had she not been as rich as she claimed? Was she forging a symbolic link with artists of prior generations? Was living here part of a carefully cultivated image, a way to give rich patrons the edgy thrill of slumming? Or did building a little four-story house behind an apartment building really cost that much money, even here?

The proportion of modern buildings to older ones on Tamara's block made me worry that her house had been torn down, but I found a fair run of prewar apartment buildings mixed together with what may have been prewar warehouses. Though they were faced with pierre de taille, not a single building bore any carved detail: Plain Jane, respectable but low-rent, they squatted one after the next, all bracketed with gloomy shutters. And then, when I reached the center of the block, I gasped. Two art deco windows faced me, round as eyes.

Someone had ripped out the staid prewar doorway of the apartment building at 7, rue Méchain, and replaced it with a sleekly curvilinear deco one. Tamara had designed this entrance. This was the door to her house! She had imagined this pair of eye-windows flanking the door, their pupils mazy with black and white rectangles set off from each other like overlapping slips of paper. She had designed this door, glass with black-painted bars, behind which rose a glossy black staircase. She had decreed that the foyer floor would be carved into this off-center Mondrian grid of slate and inset doormatting; she had sketched these metal bands set into the floor, their curves echoing the bannister's. Directly opposite me stood a second black-barred glass door, two or three steps down: the door to the garden, behind which lay the actual house Tamara had designed. I wanted to see it. I couldn't see it at all. This entrance was one big tease. I wished somebody would walk out of the building so I could slip inside.

As I paid my quiet homage, the shabbiness of the place began to sink in. Paint bubbled off the art deco curve overhead, while indoors, the cunningly-inset doormatting lay threadbare. I recalled the garish gold statues outside the Palais de Chaillot I'd seen en route to Tamara's first apartment the day before. I couldn't believe one of them rated a color photo in the Michelin Guide, when once you're there, if you turn fifteen degrees to the right, you're head-to-head with the Tour Eiffel. If Parisians are willing to block out the whole Eiffel Tower to spotlight their art deco heritage, I thought, you'd think someone would take better care of this place. Perhaps it's testament to Tamara's selfishness and contentiousness that no one had turned her house into a museum, but as I thought about all the people Paris manages to commemorate, so few of them women, I felt a clammy wave of unlovedness, of forgottenness, rising off the building before me. Just the night before, Sharon and I had gone to the theater Sarah Bernhardt had owned and headed for 25 years, named Théâtre Sarah Bernhardt both before and after the war. The Germans, put off by Bernhardt's Jewish origins, had renamed it Théâtre des Nations during the war; new owners had renamed it Théâtre de la Ville in 1968. I looked again at the building Tamara had stamped with her vision and will. At least somebody could put up a plaque.

I cycled back toward home, stopping at a pastry shop to try a confection I'd never seen before. The pastry chef said she'd designed it herself. I brought my prize to nearby Square Henri Cadiou (painter, 1906-1989), where the steely little ribbon of a fountain by, the sign said, César Domela (who?) spat into the growing drizzle. A few struggling rosebushes brandished their end-of-season hips. A woman with a laptop availed herself of the free wifi offered in Parisian parks: When the rain began falling in earnest, she ducked under a chess table and kept working. I unwrapped my fragrant Évasion, a raspberry macaron sandwiching a layer of pastry cream and a cluster of raspberries. Tamara de Lempicka had died just 30 years before. We did not know who would remember us after our deaths, the woman with the laptop, the pastry chef, nor I, but we did our best anyway: to make something that gave delight, to persist despite rain, to get it all down. I opened my umbrella and ate slowly.

An excerpt from The Last Nude
The Last Nude, by Ellis Avery (Amazon)
About Tamara de Lempicka