Was that a dolphin? A ripple? A manta ray? Or the elusive whale shark? A visit to La Paz, Mexico, brought out contributing editor Lanee Lee's inner Captain Ahab.

LA PAZ, Mexico – My throat was tight. My breath shallow. My eyes stung from staring hard at the horizon. George Negrete of Fun Baja, the captain of our whale shark hunt, told us to look for shadows in the water or for a fin, like a great white shark's, to find the world's largest fish, which is neither a whale nor a shark.

"The world's largest fish" is not just a catchy marketing slogan: Whale sharks can grow up to 65 feet and weigh a whopping 75,000 pounds. 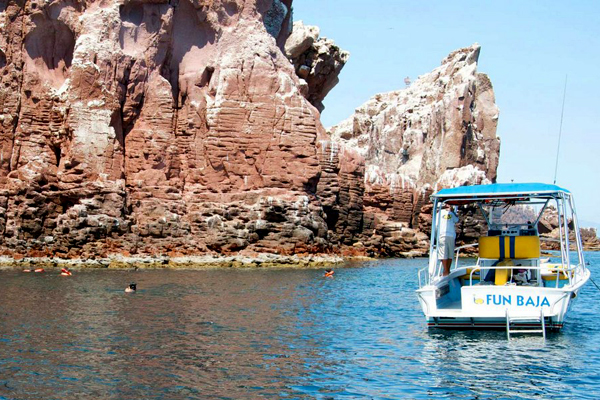 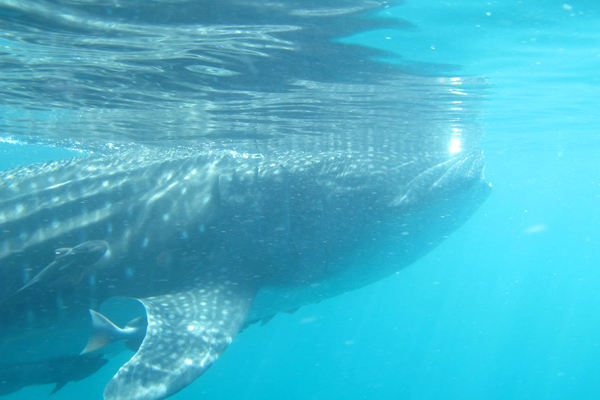 This was our second day in search of the white polka-dotted whale with no success, and it was nearly time to call it a day and catch our flight home. Just when it looked like the mission had failed, shouts came from the front of the boat. "Get your gear! It's swimming by on the left!" That meant it was time to jump in the water. Because whale sharks are as harmless as billy goats, swimming with them is encouraged. This is not the usual whale-watching expedition.

The first sighting of the strange but magnificent whale shark left us silent and slow to react. By the time we hurled ourselves in the Sea of Cortez, the gentle white giant has disappeared. For such a big thing, whale sharks can swim pretty fast — up to five miles per hour.

Delirium similar to Ahab's set in. My friends and I, in desperation, made up a whale shark rap to the "Big Pimpin'" tune in hopes of wooing the marine mammoth back to our boat. It went something like this:

Now it was really time to head back or we'd miss our flight. Even though we got to swim with playful dolphins and a 10-foot manta ray earlier that afternoon, I felt forlorn. Scorned even. The mood, felt by both the crew and my shipmates, was heavy with disappointment. 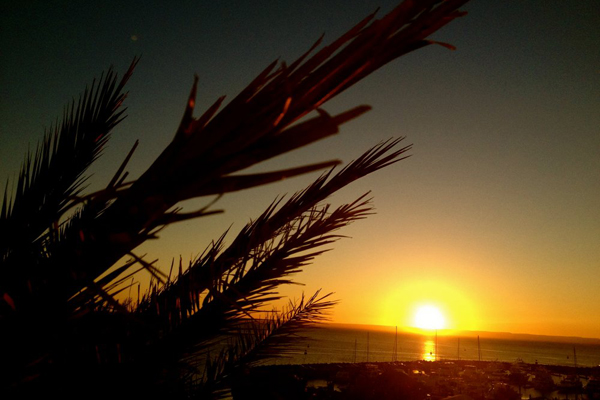 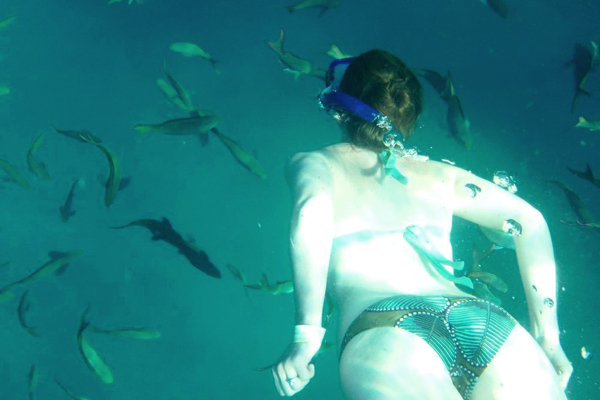 Snorkeling the Sea of Cortez.

Nearing the dock, I heard another shout. "Jump in NOW!!!"

This time, I was not missing my Moby Dick. I threw myself in the water like it was the last boat off the Titanic.

Sure enough, like it was playing hide and seek, the whale shark's rectangular head appeared from the sapphire-colored watery abyss.

I screamed into my snorkel mask. I knew that it wouldn't attack me. Whale sharks eat plankton and algae, for goodness sake. But when a 15-foot anything is swimming towards you, and you're practically naked, it's freaky.

The whale shark, like he was doing a grand whale waltz, gracefully swam around our group, circling back a few times, but really not paying us much attention. The experience was like nothing I've ever felt. To be so close to such a mysterious and dangerous-looking creature dating back 60 million years was nothing short of mind-blowing. I can't describe it better than Melville did:

"Consider the subtleness of the sea; how its most dreaded creatures glide under water, unapparent for the most part, and treacherously hidden beneath the loveliest tints of azure... Consider all this; and then turn to this green, gentle, and most docile earth; consider them both, the sea and the land; and do you not find a strange analogy to something in yourself?"
- Herman Melville, Moby Dick

I met my Moby Dick, and I lived to tell about it.

Whale shark season in La Paz runs from early winter until late spring, when whale sharks feed in the Sea of Cortez and in the Bay of La Paz in Baja California Sur. Fun Baja's crew are experts in whale shark spotting; you'll want to go out with a pro. Another incredible marina animal encounter Fun Baja offers is snorkeling with sea lion pups on Isla Espiritu Santo, about an hour by boat from La Paz. For a bona fide whale sighting, head to La Paz from January-April for the gray whale migration. 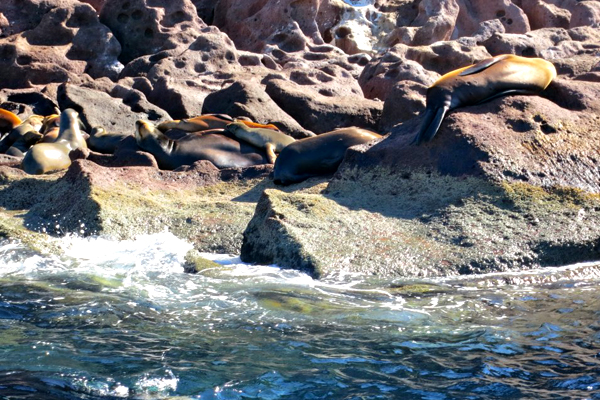 CostaBaja Resort & Spa
If a resort stay is de regueur, CostaBaja is La Paz's original five-star resort, with creature comforts including Mexico's only Gary Player-designed golf course, locally-inspired treatments at Espiritu Spa, three pools, and several bars and restaurants. It's ten minutes outside La Paz, but an ideal stay if you're the luxe sailor type, as a marina surrounds the resort.

Hotel Perla
For a beachfront room right on the Malecón (beach walkway), you can't beat Hotel Perla's rates, roughly $90 a night. Rooms are simple and clean. 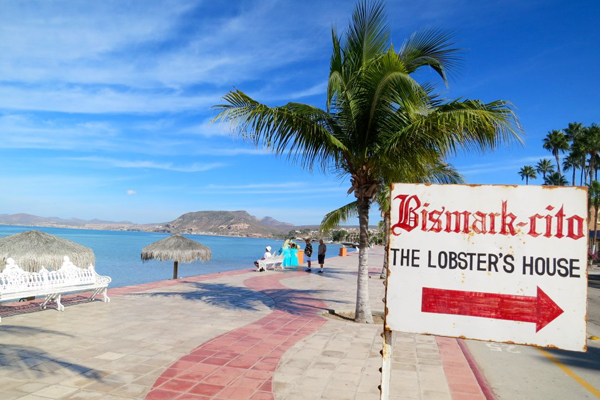 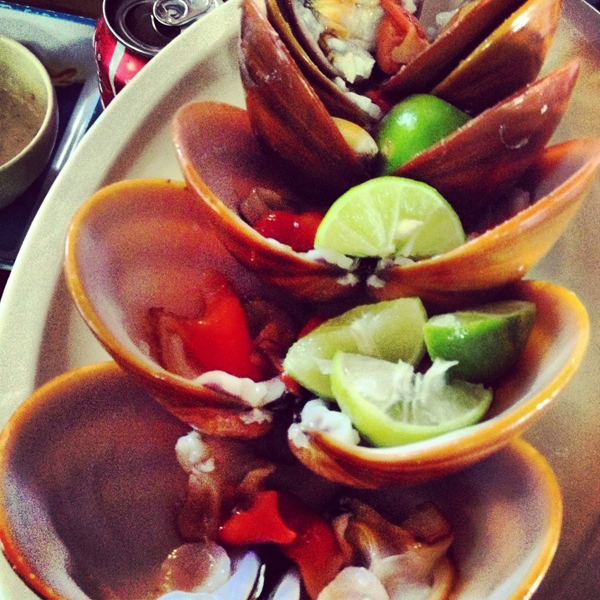 Car: A rental car will come in handy; there is so much to explore in the surrounding area. Cabo San Lucas is two and a half hours away. Todos Santos, a charming artist/surfer enclave, is about an hour away. La Paz's best beaches are about a ten-minute drive from the city center.

Just Back from Todos Santos
The Buzz in Baja