A few days after we published this story, a devastating earthquake struck Katmandu, Nepal. In the immediate aftermath, our thoughts turn to the relief efforts helping the many thousands of people affected. But, in the medium and long term, the region will need the support and income that comes from travel and tourism. Fathom will play our part in both.

When we last checked in with Sidetracked, one of our 24 Best Indie Magazines for Travelers, they shared a thrilling piece about freediving with sharks in Honduras. This time, in celebration of Earth Day, we follow Polish couple Mateusz and Anna on a bike trip through Nepal's majestic Annapurna mountains. At this point in the story, they've just turned off the tarmac road and entered the circuit proper at Besisahar.

NEPAL – On the way around the Annapurna mountains, we rode across various hanging bridges. Challenging at the beginning, it quickly became one of our favorite forms of entertainment. Most of them were not as wobbly as one might think, some were as smooth as the best European bicycle trails. We entered a footpath in Chame; the four-wheel-drives bringing tourists high up on the trail had their last stop there. The rest of the region was only accessible by foot or bike. Some narrow parts of the track ran parallel to a cliff, with a wild and raging river directly below us. Spectacular, granite slopes looked like congealed lava. Pastures were filled with horses and yaks, villages with children playing bows and arrows, old ladies circumambulating whitewashed stupas. 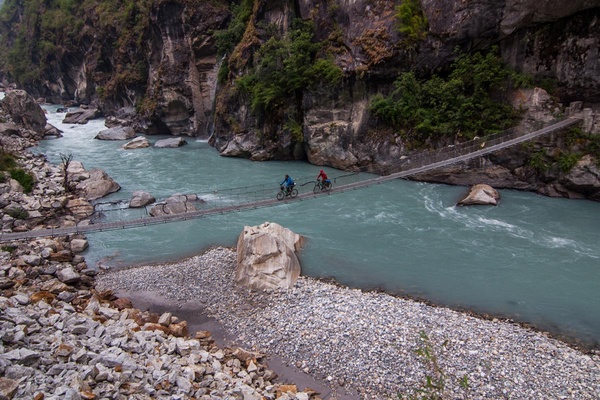 Enjoying the astonishing nature along the track, we reached Manang, a high mountain town inhabited by the people who have lived in the shadows of the Annapurna for generations. We were very lucky to arrive right in the middle of a Buddhist festival. We witnessed a traditional dance of the lamas and the whole community gathered to pay homage to the local deities and the heads of the local monastery. A spectacle of art and magic, with monks dressed in silk robes of a thousands colors, wearing masks of demons, playing drums and brass trumpets. 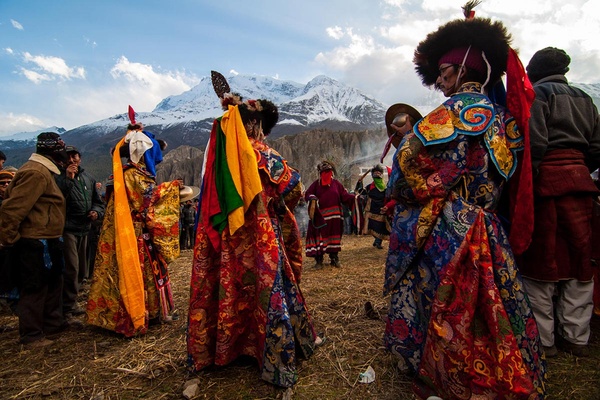 Since Manang is located at an altitude of more than 3,500m, we decided to give our bodies a chance to build a few more red blood cells before moving towards the highest part of the trail. The room of the guest house where we stayed had windows facing the Annapurna III and Gangapurna. So when the rays of the morning sun woke us up, we were stunned by the white giants standing quietly on the other side of the valley. After two days of relaxing, we started pedalling towards the highest point of the Annapurna Circuit: the Thorong La Pass. We could already feel the effects of oxygen deprivation, but being surrounded by such majestic mountains pumped us with special energy, so we kept on cycling further and higher.

This entry is excerpted and edited with permission from Sidetracked, where the article originally appeared. Read more of Mat and Anna's cycling adventure through Arunachal Pradesh in Sidetracked Volume Three.