We've followed Kelley McMillan, our adventurous Indiana Jane, as she dove into Victoria Falls in Zambia and tracked lions in South Africa. Her latest African wildlife discovery, Uganda, may top them all.

UGANDA – Uganda unfurls from the capital city of Kampala in green hills, banana fronds, and tawny grasslands. In the west, the savannah rolls right up into the Rwenzori Mountains, the highest mountain range in Africa, which separates Uganda from the Democratic Republic of Congo. Maybe it's the dense jungle blanketing the mountainside, the purple light the hills cast as the sun sets, or the possible danger lurking on the other side, but the Mountains of the Moon, as the Rwenzori are known, seem mystical. 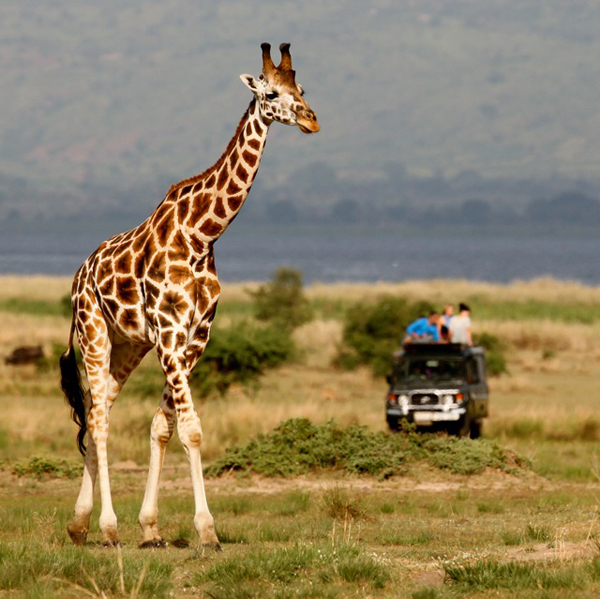 Often tainted by its turbulent past, Uganda today is in fact one of the most peaceful, stable, and democratic countries in Africa (though check the US State Department website for the most up-to-date travel information). Though it's one of the poorest countries in the world, the overall vibe feels safer than, say, South Africa.

And there is so much to do: track mountain gorillas in Bwindi Impenetrable National Park, visit the source of the White Nile in Jinja, and straddle the equator, which slices through the bottom third of the country, 44 miles south of Kampala. 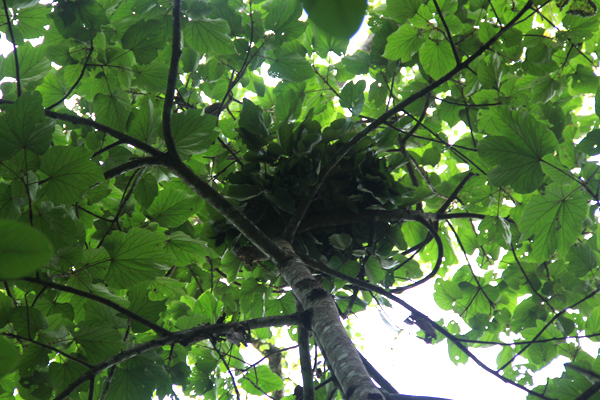 A chimp's nest near Mweya Lodge. 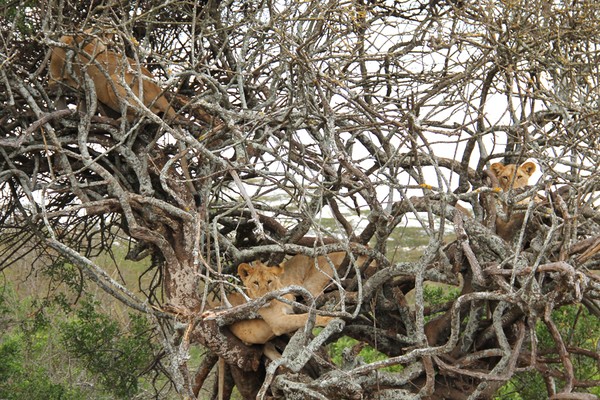 While most might associate Uganda with rugged jungle landscapes and primates, the country also offers first-rate game viewing. Prairies teem with lions, elephants, and zebras. The prices are right: An upscale safari lodge in Uganda costs about half what it would in South Africa. And so is the privacy: Unlike many parts of east Africa, when you come across a lioness and her cubs in Uganda, there won't be another vehicle in sight.

Last March, after a 15-hour flight in plum, first class seats on Ethiopian Air and one layover in Addis Ababa, Ethiopia, I landed in Uganda for five days exploring the African countryside. I chased chimps, visited the narrowest part of the Nile (yes, the Nile runs that far), and saw a "cottage" where the Queen Mother once laid her head. Raw and wild, regal and chic, Uganda was a landscape worthy of Jane Goodall and Katherine Hepburn combined.

WHAT TO DO + WHERE TO STAY

A lot. Everything from lazing alongside the Nile and exploring the dense equatorial jungle, to water safaris where you'll encounter some of the healthiest populations of hippos in the world. Just budget your time accordingly.

Start your Ugandan adventure with a stop at Chobe Safari Lodge, an elegant new safari camp set along the shores of the Nile, a four-hour drive from Kampala. There's a gym, a multi-tiered infinity pool that seemingly drops into the river, and several luxury tents overlooking the Nile. Make sure you get one of those. Fall asleep to hippos snorting, the river roiling, and elephants bellowing in the distance. Wake up early for a morning game drive and watch the savannah come to life against the peachy glow of the sun rising. You'll see elephants, giraffes, lions, and maybe even a baby warthog nursing. 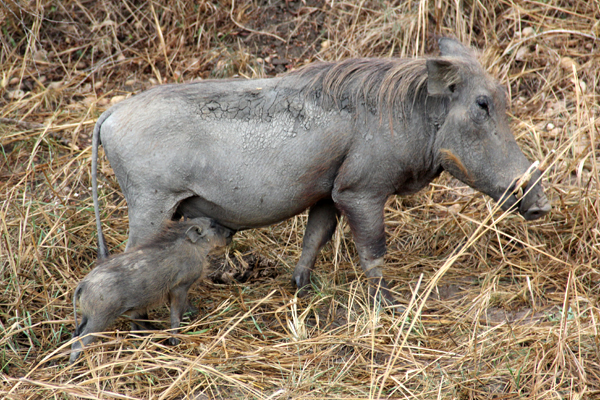 So that's a baby warthog nursing. It sure is. 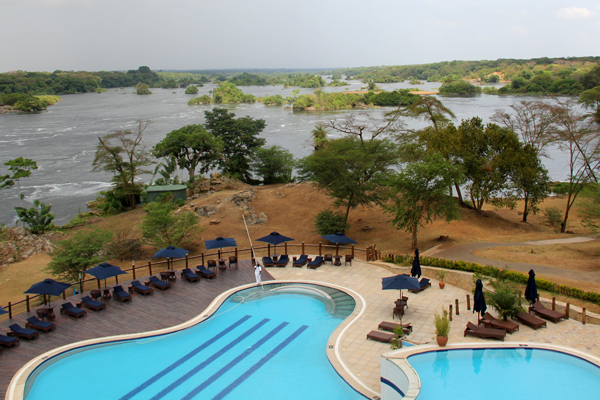 The pool at Chobe Safari Lodge.

Next stop: Paraa Safari Lodge, a stylish hotel perched on a bluff overlooking the White Nile set in Murchison Falls National Park. The Nile River has two main branches: The White Nile, which may start in Jinja on the northern shores of Lake Victory in southeastern Uganda (experts can't agree on the source), and the Blue Nile, which springs from Lake Tana in Ethiopia. The two tributaries merge in Sudan and form the waters of the main Nile, which flows north through Egypt. 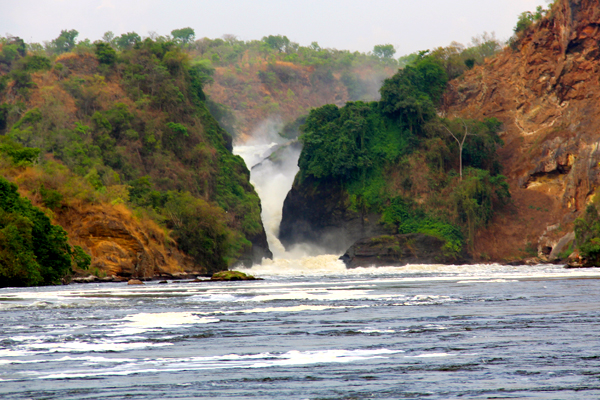 Exploring Murchison Falls from the river.

By day, explore the river on a pontoon boat and jet upstream to Murchison Falls, the narrowest point of the river, where water squeezes through a 30-foot gap in the rocks, creating a dramatic cascade. Once you've reached the falls, ask the boat to dock on shore. Hike to the park at the top of the falls, a lawn dotted with trees and benches, and bask in the waterfall's rainbow mist. Sure, you're in the middle of nowhere, but these falls are famous: Winston Churchill visited in 1907 and later declared Uganda "the pearl of Africa." They were featured in the film The African Queen, and Ernest Hemingway crashed his plane down river in 1954. Back home at Paraa, kick back with a gin and tonic at the Explorer's Bar. 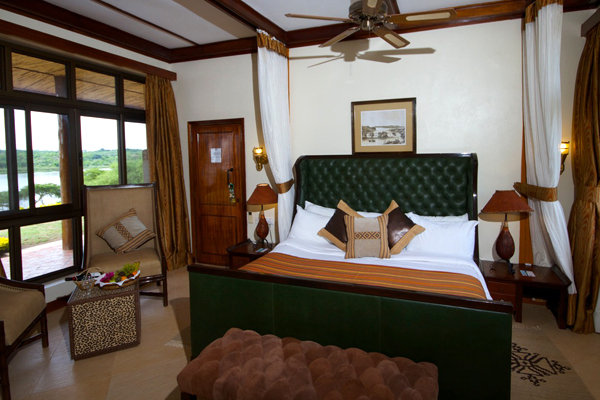 Push south to Queen Elizabeth National Park and Mweya Safari Lodge, a luxurious safari outpost overlooking the Nile where the royal family once stayed. If you're traveling with a group, reserve the Queen's Cottage, a decadent, beautiful, fit-for-royals three-bedroom house with a spacious living room and a breezy veranda with breathtaking views of the Kazinga Channel, which teems with thousands of hippos. 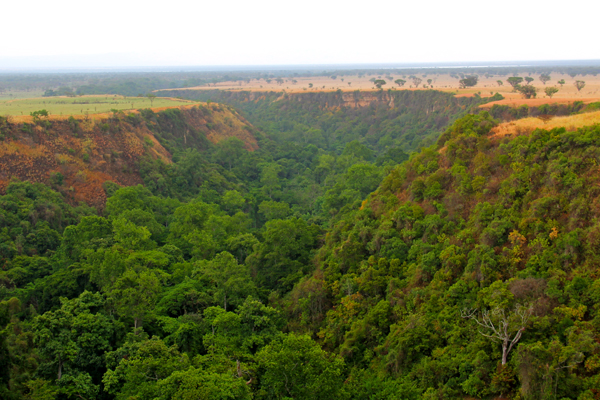 Mweya makes for a super-luxe basecamp to explore the Ugandan countryside. Spend a day tracking chimpanzees at the Kyambura Gorge, a secret jungle oasis tucked into a five-mile-long crack in the earth that slices through the Rift Valley. 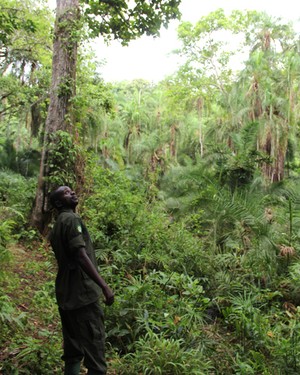 Looking out across the golden grasslands, you might miss this green ribbon that falls away, 700-feet down from the savannah into a verdant world all its own. The gorge is home to five different types of primates, including chimpanzees, as well as hippos and elephants who crash through the forest to drink from the river that runs through the gorge. This is proper African jungle: dark, lush, and humid, with human-sized palm fronds and vines hanging from every tree. Your guide will whack a trail through the forest with a machete, following the signs of the sometimes elusive chimps.

After a day slogging through dense jungle, dinner at Mweya is a treat. Try the makote (goat) stew or a delicious curry. The chef is Indian and knows his way around curries and chutnies, that's for sure. Grab a table on the veranda and take in the sounds of the animals frolicking in the Kazinga channel.

On your second day at Mweya, visit the equator, which is an hour's drive away in Kikorongo. Or spend the day chasing rare tree-climbing lions in Queen Elizabeth National Park. Mweya also offers day tours to Bwindi National Park, where the rare mountain gorilla roams. This should be on every traveler's bucket list. Come sunset, cruise, cocktail in hand, up the Kazinga Channel, home to some of the healthiest populations of crocs and hippos in the world. As the sun sets, local villagers will take to the waters to cast their fishing nets, and malachite kingfishers will lace figure eights in the skies above you. 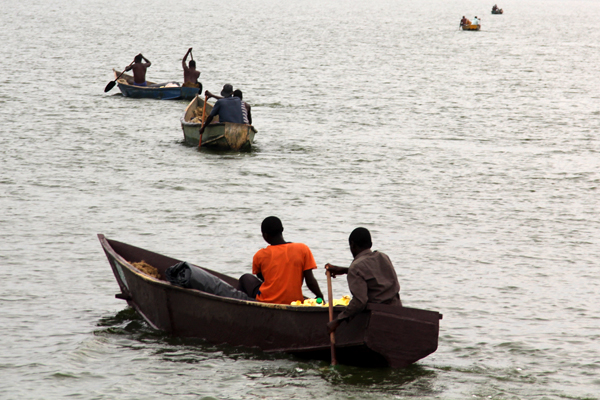 Fisherman on the Kazinga Channel. 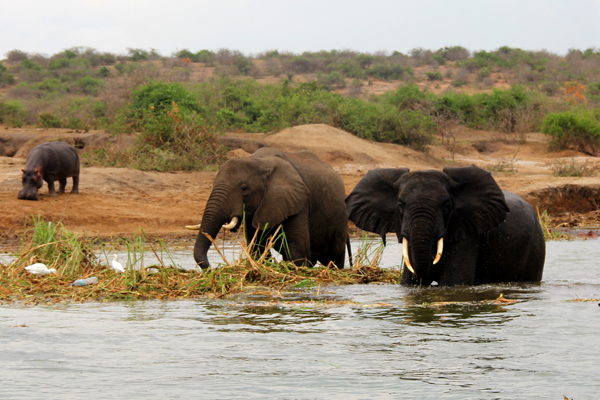 Elephants playing on the Kazinga Channel.

When it's time to head home, one night in Kampala will be enough. Though it's interesting to see a big, bustling, and very African city, it can also be overwhelming, and there aren't many attractions. Jinja, the debated source of the White Nile, is close by and offers awesome white water rafting. Take refuge at Kampala Serena Hotel before heading home. Or extend your trip next door to Kenya. Two weeks is ample time to make a thorough circuit through Uganda, Kenya, and even Rwanda. 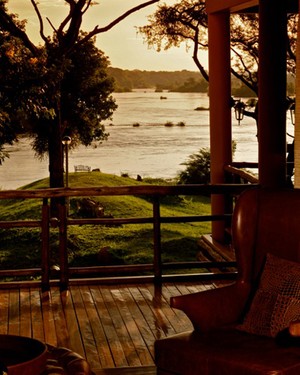 Premier Safaris can organize a multiday itinerary with visits to each of the lodges. They will also arrange transportation via plane or mini van between lodges. It's fairly easy to drive between Chobe and Paraa, but Mweya is a bit farther south and is best accessed by charter plane You could drive to Mweya from Paraa, staying overnight in Kampala. The more adventurous should add a two-day road trip down the shores of Lake Albert. The roads are rugged, but the route is quite scenic.

December to February, June to September are the dry seasons. It can also be hot.

March to May, October and November are the wet seasons, but I went in March and don't remember a day of rain. Evenings and early mornings are cool, so bring a sweater.

Ask Fathom: What Do I Bring on Safari?