The vast wildlife and natural beauty of the Kenyan bush could only be improved with a little bit of romance. Writer Ariane Marder regales Fathom with stories of her un-tamed adventures in Kenya.

KENYA – It's frigid when the sun comes up over Mount Kenya, where we've spent the night camped alongside Lake Ellis. I listen for the sound of the nearby leopard, but he seems to have moved on with the daybreak. Lucky me, my camping buddy has come prepared, hauling a yurt-style British army tent complete with wood burning stove — which doubles as a heat source for our morning coffee.

He takes a sip. "Like making love in a canoe."

"Fucking close to water," he says, completely deadpan. I laugh. I will have to remember that.

Jon, my host for two weeks, is a 32-year-old fourth-generation East African who grew up in both Kenya and Tanzania and speaks Swahili so beautifully the rhythmic sound could lull you into a trance. He and his friends are part of a group of macho, industrious, badass white Kenyans who are expert flirts and talented storytellers — and have a deep love for the land where they were born. We met once, six months before, "getting frisky on whiskey," he reminds me. And now, here I am, playing house with him in the bush on the edge of the 64,000-acre Lewa Wildlife Conservancy.

I had been to Kenya before. I knew I'd be back. The French call it mal d' Afrique. They say it speaks to some primal level — that you recognize the wilderness deep in your DNA. It has to do with the vast expanse of sky unlike anywhere else in the word, and the perfect, almost surreal light. It's an infection — a feeling that's difficult to put into words, like falling in love. This was my safari (the local's common word for journey) — a 30-something woman traveling on her own. I had booked a one-way ticket knowing only two people in the country and left the rest to chance. 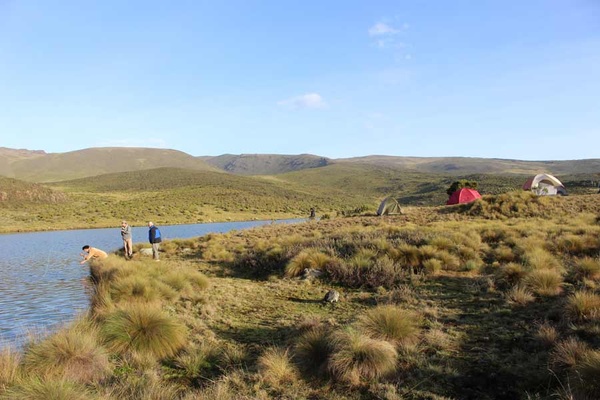 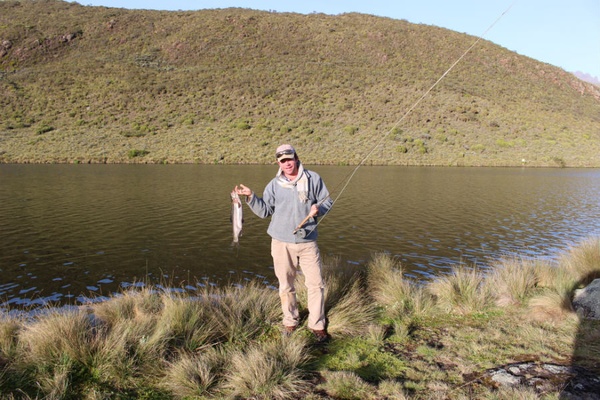 Hanging at the camp site on Lake Ellis; fish, it's what's for dinner.

Back on the mountain, I learn that Jon, a master fisherman, had loaded up two helicopters and stocked the very same lake with trout 18 months before our trip. In the morning, the guys pull out their fly rods and waders and, in view of the snowcapped peak, spread out on the bank to reel in one five-pound fish after another.

The road up to Lake Ellis had been challenging. The higher we got, the deeper the mud became. We decide on the more scenic Chogoria route to descend, taking in the jaw-dropping landscape that changes so quickly it's as if one minute you're in the rolling Scottish moorlands and the next you've been transported to the impenetrable forests of New Zealand. On the way down, we run into some bad luck, but I've fallen in with the right crowd. When Jon and I get stuck in a "whole lot of hole," one friend hitches our Land Cruiser to his lorry and eventually maneuvers us loose. While I help change the busted front tire, Jon and the guys pull out their chainsaws and clear a new pathway. I'm impressed. This group knows how to get shit done. 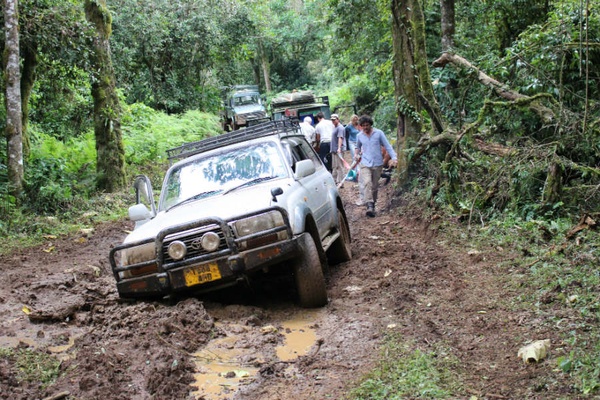 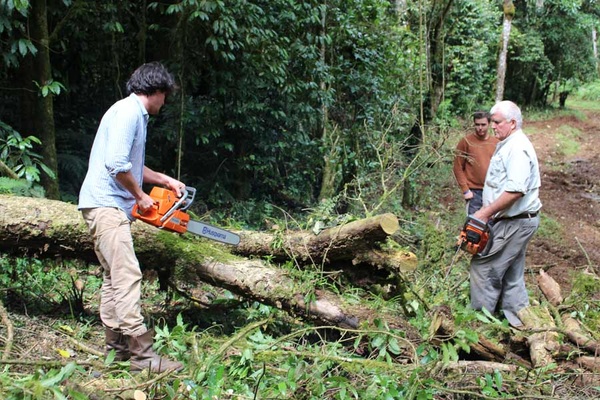 For two weeks I assume the role of happy observer as Jon sets up his new house in the bush. I learn the names of his house girl, the askari (night watchman), and gardener. Jon is concerned that my holiday is turning out to be a bore, but I assure him that it's quite the opposite. Enjoying daily breakfasts of homegrown bananas and paw paw (papaya), reading by the fire as he and his brother raid the beehive, listening to the stories of near-death elephant chargings, political friction, and sober discussions about the latest poaching, I am anything but bored. Jon is a constant stream of information, pointing out the best way to trim a tree, harvest tea leaves, deal with a disgruntled staff member, and reminding me to watch out for nettles, acacia thorns, and ticks.

Each morning, as we search for WiFi at the nearest lodge, we speed through the conservancy through towers of reticulated giraffes, basking in the dusty wake of lone rhinos and a dazzle of zebras. With the largest black rhino sanctuary and 20 percent of the world's population of Grevy's zebra, Lewa is one of the last safe havens for nature to play out undisturbed. 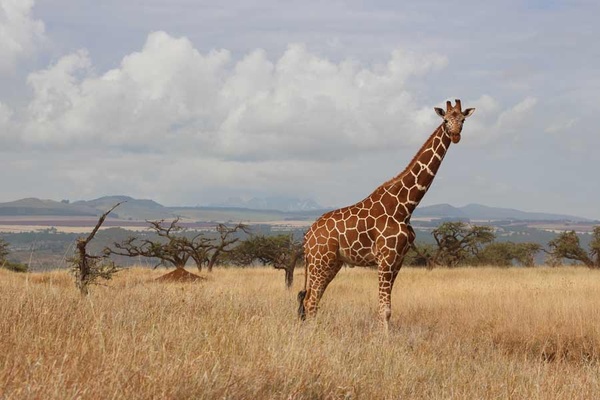 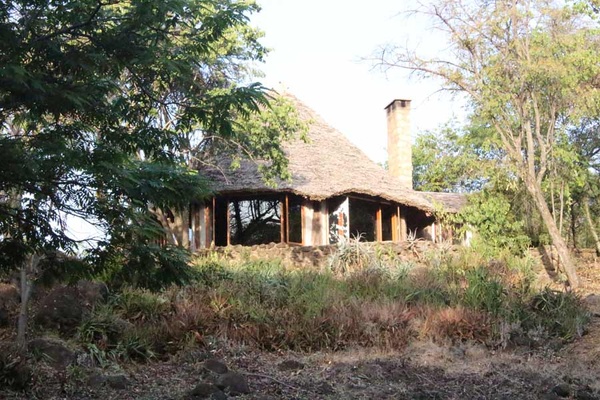 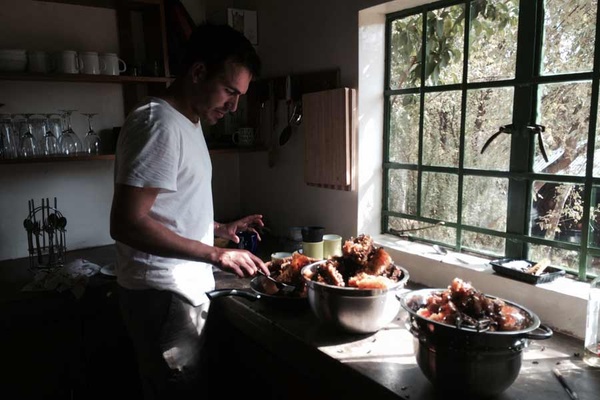 A local checks out visitors; where the author plays house; preparing honey in the kitchen.

When we gather at the home of Batian Craig (the unofficial prince of Lewa and a bigwig in the conservation world) for a party fueled by tequila and classic rock, I learn that only a day before he mourned the passing of his beloved grandmother, Mama Delia. She and her husband David were responsible for transforming their family's cattle ranch into the conservancy that is Lewa — the first of its kind in Kenya. They tell me she was cremated on her shamba on an open-air funeral pyre. At 90, she was a national legend.

Before I know it, my two weeks are up, and Jon has to report back to his job managing a camp for the Lokichar oil project. We drive the five hours south to Nairobi and check into the storied Muthaiga Country Club, the century-old stomping ground for Kenya's colonial set. The plan is to head to the island of Lamu to spend a few days on the beach, but the next morning Jon receives a call from his friend at Manda Bay. "Pole, I'm sorry," he says over and over, and I know something terrible has happened. Only days before, we spoke about Kenya's bad rap and how tourists were becoming more wary with each headline-making news story. Now there has been a terrorist attack in nearby Mbekoptoni — rumored to be by the Somali Islamist group Al Shabaab — and 48 people are dead. I want to go despite the warning, but don't. The next night, stories surface that 15 have been killed in a second raid. 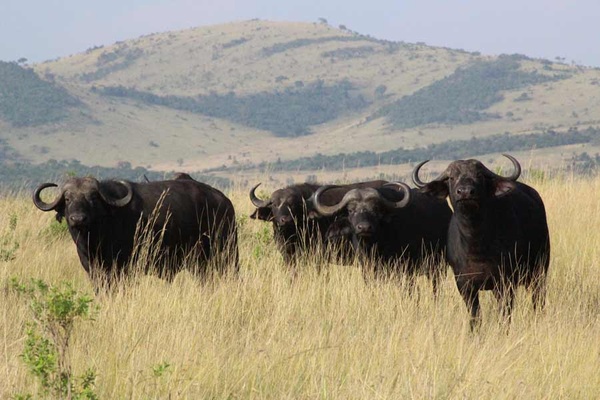 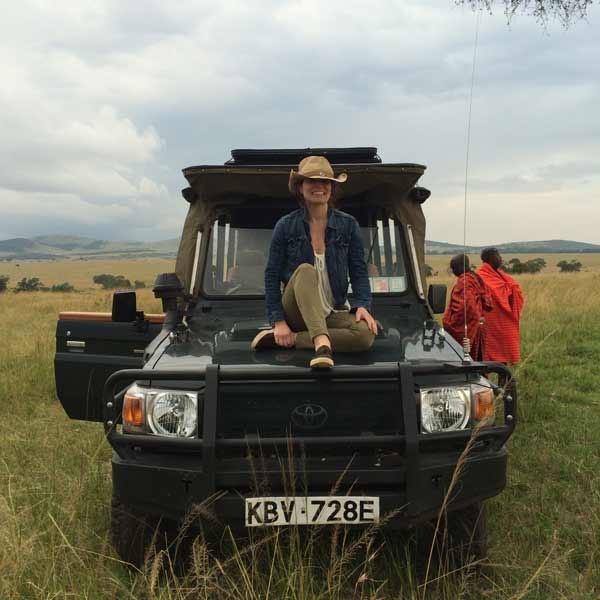 Picture-perfect on safari; the author, ready for adventure.

I say my goodbyes to Jon, thank him for letting me outstay my welcome, and catch an early flight to the Mara instead.

The Maasai Mara National Reserve is ostensibly a continuation of Tanzania's Serengeti. I land, much to my surprise, in the middle of the wildebeest migration. On the way to Sala's Camp, on the edge of the Sand River, the smell of rotting carcasses consumed by predators is overwhelming and visceral. Nature is in full force.

Unlike Lewa, the mark of tourism is pronounced. Lodges are slowly creeping up and vans crammed with people are hard to miss. But even the presence of others can't detract from the outrageous beauty at every turn. Since the animals here are more accustomed to the cars, we get closer than I ever thought possible. A pack of four male lions, nicknamed the Notch Brothers for the mark on the father's ear, yawn happily despite the flies and sound of my clicking shutter.

On my last sundowner, I take it all in — the oryx, the eland, the crested crane, the roaming herds of buffalo, and the elephant bull ripping the bark from the acacia tree — and forget it all: the heartbreaks, the bills waiting at home, the email I wish I had never sent. It's just the large open sky, the faint hint of moon, the setting sun across the savannah — and me.

Then a lion's territorial call breaks the silence, and it occurs to me that when you don't have a plan, there's little opportunity for disappointment. Every moment unfurls like a gift from the unknown. I think of the leopard I spotted earlier sleeping soundly in the twilight, his belly rising and falling to the beat of my expanding heart.

And in that instant, I know Kenya is calling me back. 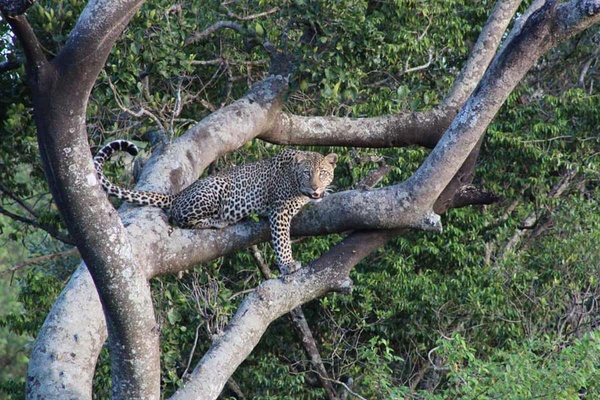 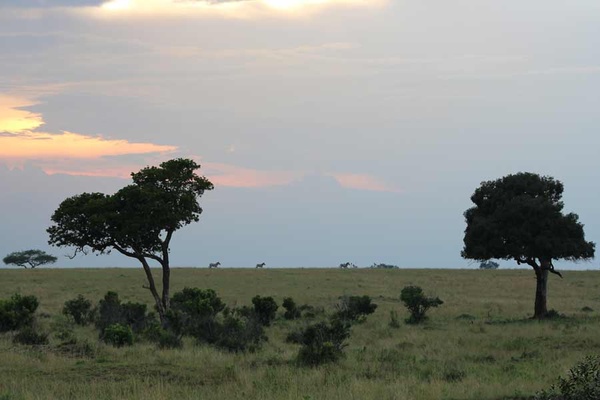 Sunset on the Mara.