How many weddings in a row can you take? A couple from London road-triped to the Cotswolds and West Sussex to attend two nuptials and learned that if the knots are tied in the English countryside, the number really doesn't matter.

ENGLAND – The sun is shining. The bunting is blowing in the wind. And everyone is praying that the rain holds off. Welcome to wedding season in the fair isle of Great Britain, a season of marquees full of fascinators, prosecco, and pervy uncles across the countryside — all the ingredients you need to make a truly British wedding, as perfectly stereotyped in the beloved Four Weddings and a Funeral.

Being a couple in our early 30s, my boyfriend and I are in peak wedding year: ten invitations and counting. But being two Jews raised in the suburbs of Manchester now living in London, most of the weddings we attend feature less of the rural idyll of the English countryside and more hotel ballrooms, hora, and a lot of people you just about recognize demanding to know when you are going to get married, have a baby, move back to Manchester, or, preferably, all of the above. As fun as these ceremonies are, when we were invited to two weddings on the same weekend outside of London, we jumped in the car and hit the road faster than we could shout "mazel tov."

The first wedding took place at beautiful Barnsley House in the Cotswolds, a part of the country where every village you drive through resembles more of a chocolate box than the last. Although I only saw the reception areas, Barnsley House is undeniably lovely, the perfect location to channel your inner Elizabeth Bennett, especially if your Elizabeth likes a good (apparently excellent) spa and likes to splurge (rooms run between £300 and £500 per weekend night).

We stayed a fifteen-minute drive away at Wheatsheaf Inn, a former coaching house converted into a fourteen-room boutique hotel, for a much more reasonable £120 a night, which apparently was very Kate Moss of us. This is where she put up her guests at her wedding.

Checking in at the bar — the pub restaurant is deservedly raved about, as we found out the night after the wedding — you instantly feel relaxed. The hotel hits the right note of high-end coziness. Our bedroom was small, but the bed was a dream, and the bathroom, with its free-standing bath, exposed brick walls, and 100 Acres products (all made in the English countryside) was an unexpected delight, given that the hotel started life as a pig stye. Such are the features of a converted coaching inn. 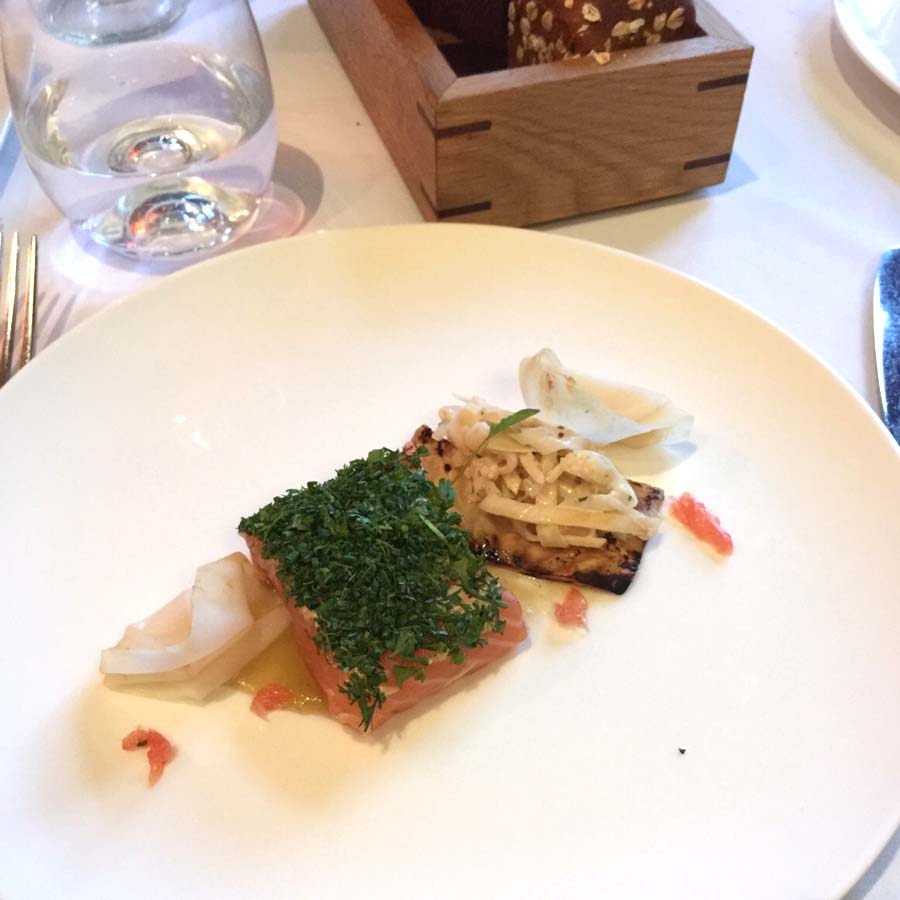 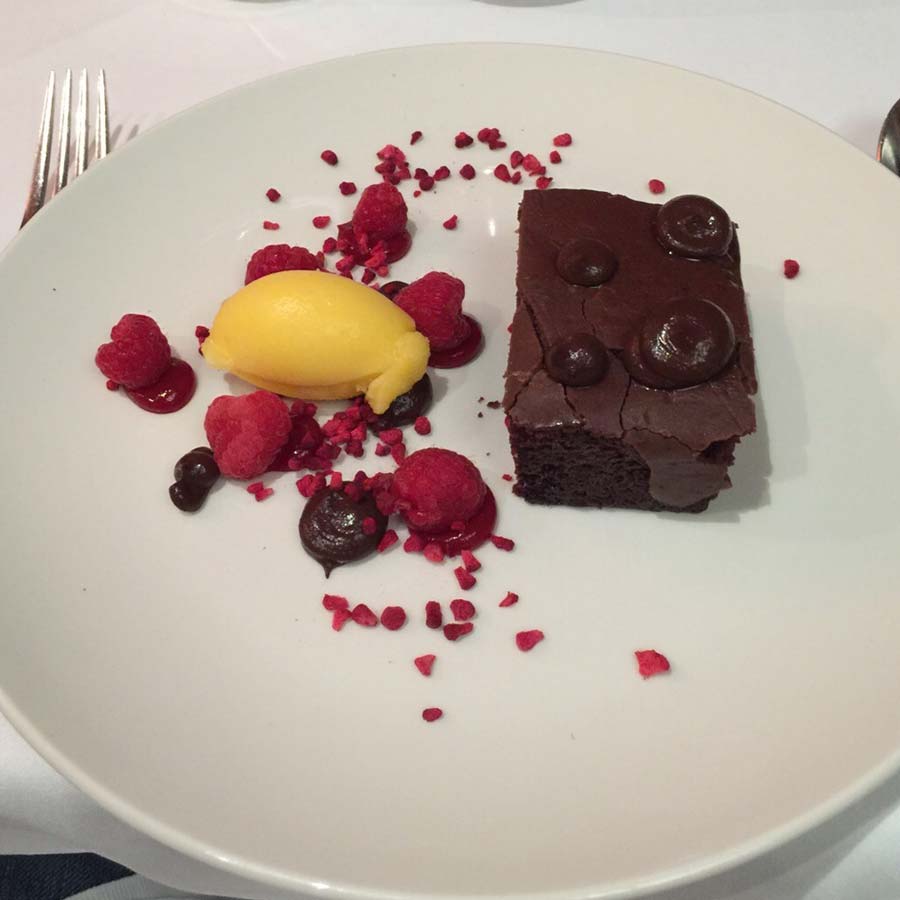 Dinner was delicious as predicted, and I am still dreaming about the twice-baked cheddar soufflé, which was light and never felt too rich. But my favorite part of the hotel was the breakfast bar. A small but perfectly formed breakfast buffet with fresh breads, fruit, hunks of cheese, and cereal, as well as a jar labeled "pharmacy" containing paracetamol and aspirin for those in need of a little help the morning after a night of way too much. (Hot food is also available to order and is not included in price of the room.) The inn is just under a two-hour drive away from our flat, and I fully expect to come back, wedding or no.

Fully restored and ready for the next stop on our nuptial roadshow, we hit West Sussex. More specifically, Lugurshall, West Sussex, a village that consists of a pub, a church, and a village green. It's 90 minutes from our London bubble, but feels like a completely different world. We stayed at High Hampstead, a three-room converted barn run by the very hospitable Annabel, who knew the wedding famly from the pub. This is that kind of place. As a point of contrast, I do not know the names of the people in my building.

Annabel will whip up a hearty bespoke breakfast (and appease even the fussiest dietary requirements) as you sit in her vast kitchen overlooking the fields of South Downs National Park. It made me long to ride a horse, which would have been easily arranged had I not needed to get to the church on time. Other activities on offer include hunting, shooting, and fishing, should you really want to get all country.

In case we hadn't tapped into our inner English enough, we rounded off our tour at South Lodge Hotel in Horsham, West Sussex. It's the kind of place where you can play out your Downton Abbey fantasies while requesting gluten-free bread and enjoying an Eno-round wine serving machine (imagine a giant wine vending machine) in the restored Victorian cellar. Such are the trappings of a country house hotel in 2015.

Because we arrived a little early for our room, the reception staff suggested that we take a walk on the grounds. We were as prepared as two hungover city-folk could be for a country walk. Which is to say, not at all, in jeans, leather jackets, and fancy trainers. The hotel reception came to our rescue with complimentary Wellington boots for our explorations. As they say, there is nothing like the country air to cure all prosecco-induced ills (or something like that). After an hour wandering around a fraction of the beautiful 93-acre grounds with blossoms in full bloom, stumbling across a lake full with a family of ducks, we felt like new people. 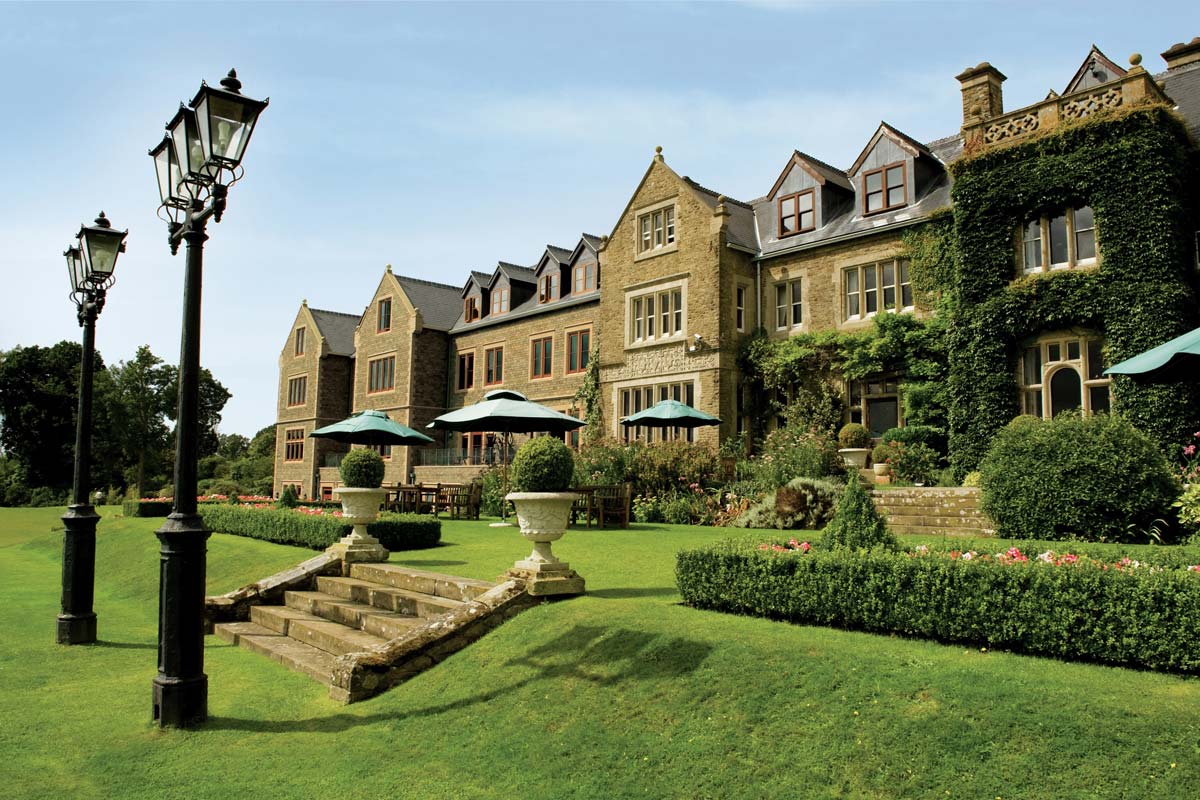 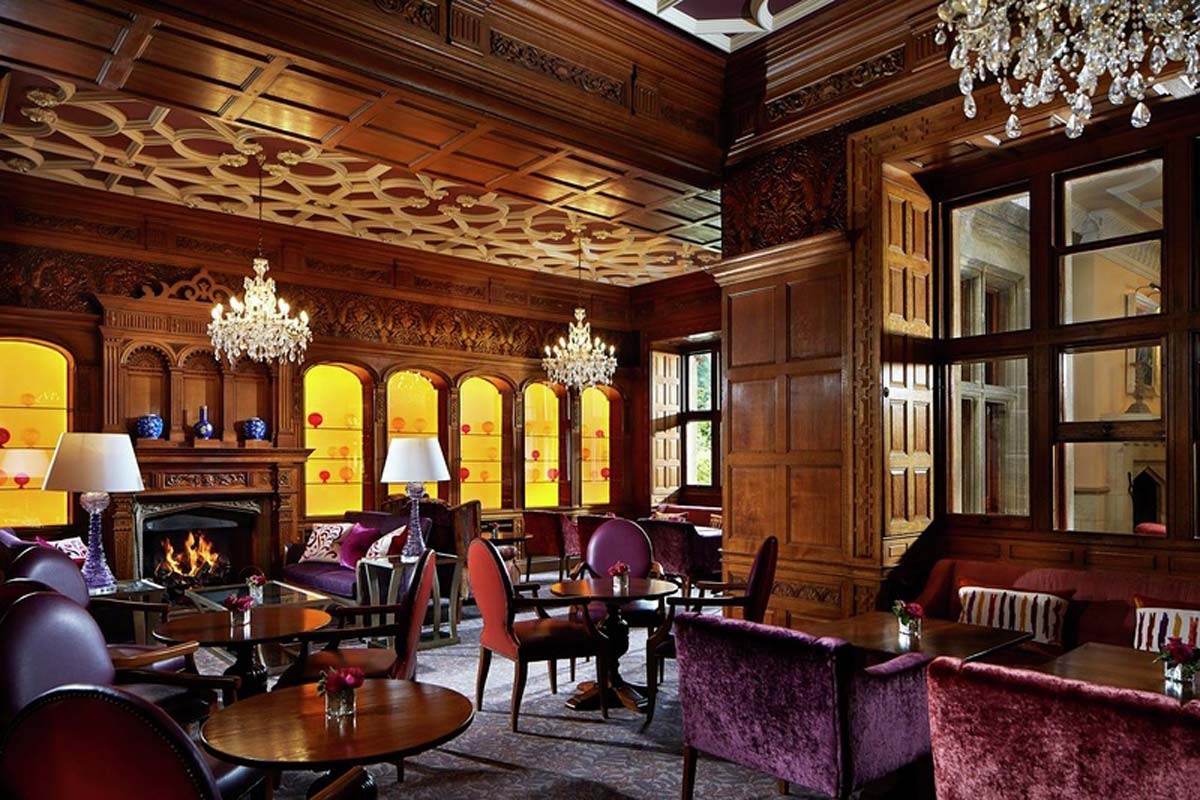 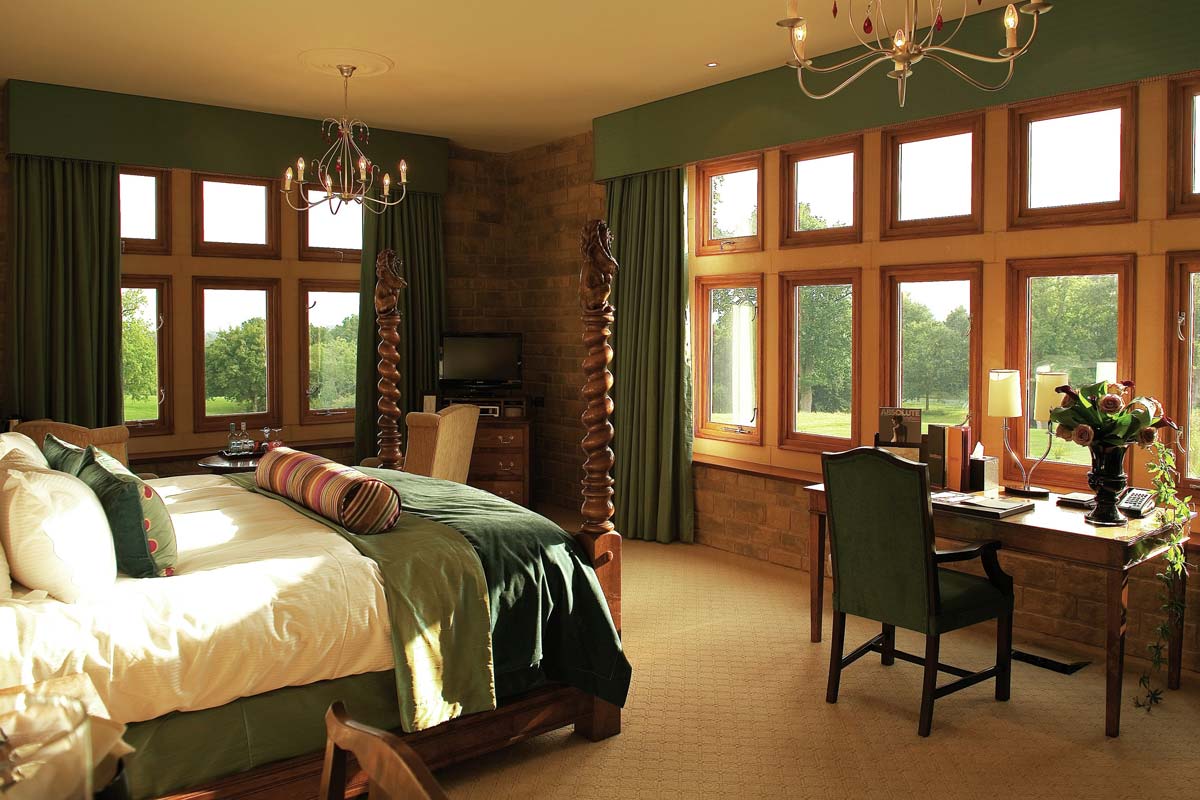 We felt even better after a nap in our master suite after choosing from the pillow menu, where options include a lavender and manuka pillow, a memory foam pillow, a romance pillow, and, less romantically, an anti-snoring pillow. Dial 0, and the impeccably (almost creepily) helpful staff will run your pillow right up. It is as though the staff have all been trained by the Dowager Countess herself: Nothing is too much. We felt very attended to during our three-course meal at Camellia restaurant with stunning views of the grounds, before heading upstairs to our suite and tumbling into our giant bed. It had been a long few days, after all. Being a wedding guest is hard work.

In the morning, I creeped to the window and peered out at the view of the hotel lawn and beyond to South Downs and made a vow of my own: to get the hell out of London more often. 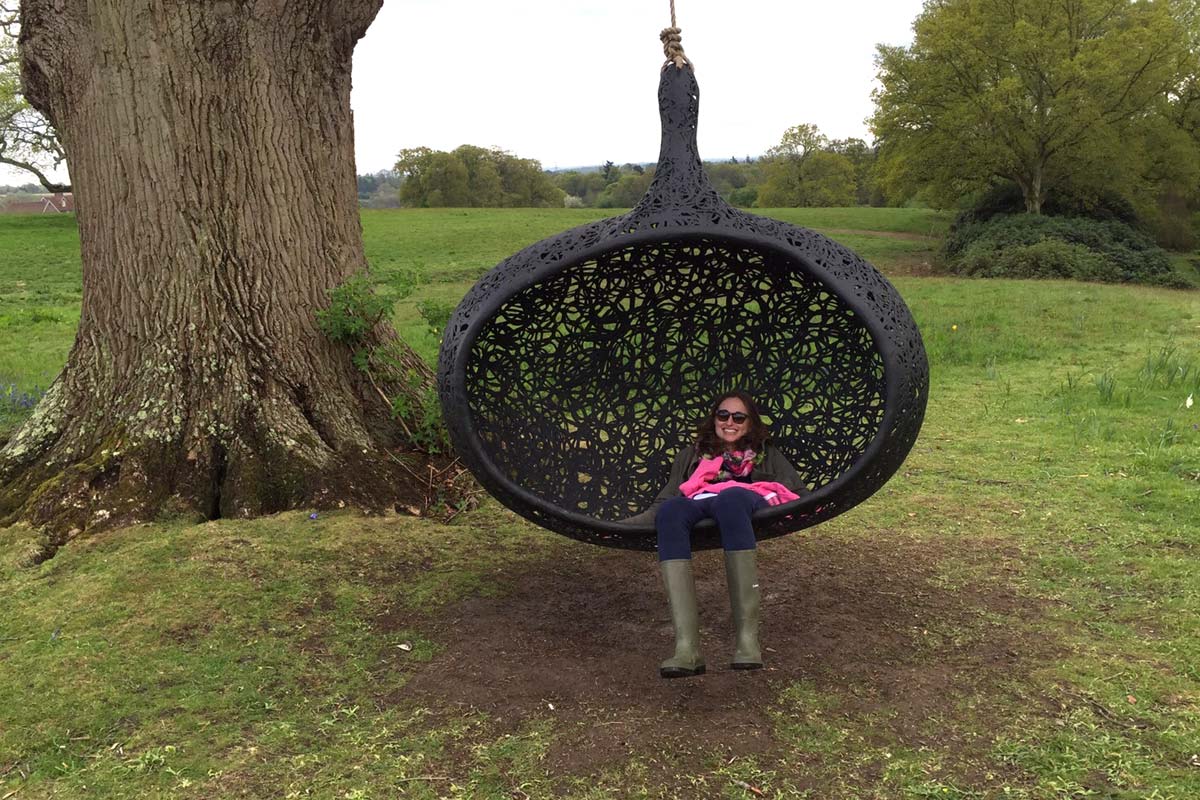 How it feels to get out of London into the brisk country air. Photo by Abigail Radnor.