The American Rockies have nothing on their northernmost siblings. Picture rugged mountain peaks, massive glaciers, and lakes the color of blue Kool-Aid. The Canadian Rockies, which splinter the western part of the country, are one of the few stretches of untouched natural beauty in North America. The area is home to a host of national parks, including Kootenay and Yoho. But the most magnificent views — and the best breweries — are tucked away within Banff and Jasper. The two parks can be wrapped into a picturesque week-long road trip.

Unless you have a private chopper, you'll fly into Calgary International Airport (YYC). The oil-rich city is about two hours east of the park. Car rentals are cheap, and the drive to Banff is gorgeous. Flat, lowland plains slowly morph into foothills and mountains. Opt for car insurance, particularly a package that includes windshield cracks. Roads in the area are not well maintained. 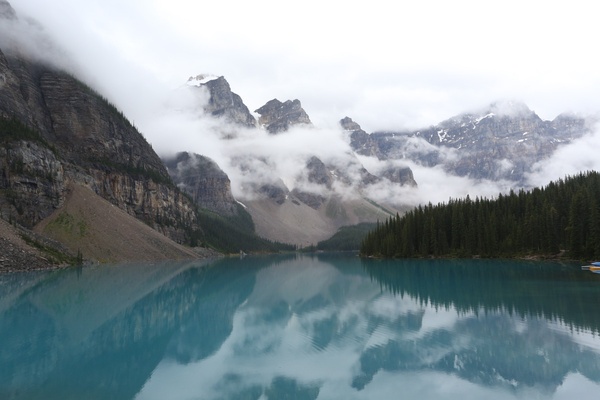 Visit early in the morning for the best views of Moraine Lake.

The crown jewel of Banff is Moraine Lake, a vivid stretch of turquoise water nestled in the Valley of the Ten Peaks. Snow-capped mountains, waterfalls, and jagged rocks surround the lake, creating an unreal scene sure to break Instagram. Canoe rental stands pepper its shores, and a one-hour paddle is well worth the exorbitant price tag.

The most beautiful sites in Banff and Jasper National Parks are also the most popular. Unfortunately even the largest tour buses can inch up the hills and valleys into the parking lot, particularly for Moraine Lake and Lake Louise. Beginning in January, the national parks will also have free admittance. Park rangers are estimating record highs for visitor levels next year. Visit sites early, around sunrise, or risk getting smacked in the face with a selfie stick.

Take A Drive...And Stop Along The Way
Columbia Icefields Parkway, a 144-mile stretch between Banff and Jasper, is the backbone of one of the world's most stunning drives. Tacking the two parks onto one itinerary creates an unforgettable road trip. Banff is the natural first stop. Spend at least two days in the park, and make sure to include stops in Lakes Louise, Moraine, and Peyto. The best views are far from the designated viewing platforms. Lace up your hiking boots and take a stroll around one of the glacier-fed lakes. If you're up for a day-long trip, bring a hammock and pencil in an afternoon nap, too.

Then, gas up the car and head north. The two-lane Icefields Parkway winds along the Continental Divide, rushing past jagged mountain peaks, sweeping valleys and ancient glaciers. Big horn sheep, grizzly bears, deer, and coyotes are often seen among the trees, which are fenced off with clear mesh to prevent accidents. While the trip can be done in just under three hours, the jaw-dropping scenery is worth making it into a day-long event. Include stops at Mistaya Canyon, Athabasca Glacier, and Tangle Falls.

The roadway runs right into Jasper, the stepsister to Banff. Quieter and more remote, the town is full of retirees and college students slinging burgers or guiding tourists. But that doesn't mean it's any less beautiful. Kayak on Maligne Lake at sunrise, or hike Morro Peak, a moderate climb up a series of easy switchbacks. For the best view, drive to Marmot Basin Ski Resort. Exit at 93A, for Marmot Road, and park just after the second guardrail. The local look-out point is nestled between a crashing waterfall and thick strands of pine with ethereal views of Jasper. For pure peace devoid of other tourists, this is the spot. 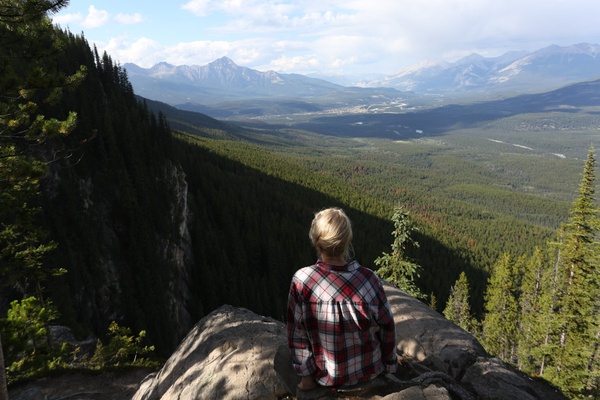 Stop at Marmot Basin Ski Resort to get a panoramic view of downtown Jasper.

Accommodations in both parks book quickly, so make reservations well in advance or be prepared to fork over $300-$400 per night. Airbnbs are plentiful in the Banff region but have yet to catch on in Jasper. For affordable accommodation, check Jasper Home Accomodation Association, a site where locals list their spare bedrooms, in-law units, or entire apartments for tourists to rent.

Grab a flakey croissant layered with butter and a latte at Wild Flour, an artisanal bakery and cafe in Banff. The tiny restaurant has bright lighting and plenty of tables to read the morning newspaper. Later in the day, order sandwiches from Nourish Bistro, one of the few meat-free dining options in the area. For the best beer, head north into Jasper. Jasper Brewing Company, located on the town's main stretch, has dozens of strains to choose from. The pub also has an extensive menu, including freshly ground kale pesto and bison burgers. For a pre-hike brunch, opt for Syrahs of Jasper, a fancy cafe with strong coffee, or pick up a pastry from Bear's Paw Bakery. 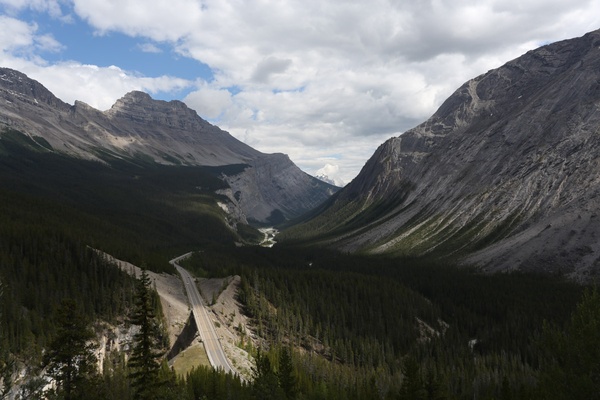 Getting Around: A car rental is the best way to get around Banff and Jasper National Parks. Plus, for the Columbia Icefields Parkway, you'll need a vehicle to classify the excursion as a "road trip." Rent a sturdy vehicle with four-wheel drive and a solid insurance plan — you never know when a grizzly bear will smash the window shield and go after that box of granola bars.

When to Go: Summer is the best season for outdoor recreation, with temperatures peaking in July and August. Pack layers and a winter jacket, as long hikes can lead you past snowbanks and glaciers.