Miami Beach has long been a playground for New Yorkers fleeing the cold and looking for some Vegas-style fun in the sun. Contributing editor Kate Donnelly checks into the legendary Fontainebleau Miami Beach and is the latest snowbird to feel the heat.

MIAMI – All that glitters is gold in Miami, especially when you're there to celebrate.

This past October, I ventured down south for a friend's 35th birthday and parked at the iconic Fontainebleau Miami Beach, the massive, sprawling oceanside resort with stellar views of the Atlantic. No complaints from the balcony of my 16th-floor suite, where I'm reminded of the pop cultural history of the place. Opened in 1954 and designed by the legendary MorrisLapidus, it's one of the grandest and most beautiful hotels in Miami Beach, a town full of great hotels. In the 1950s and '60s, the hotel was a favorite playground of Elvis Presley, Frank Sinatra, and the Rat Pack, and it starred in the sweeping, opening aerial shot of James Bond's Goldfinger in 1964. (Watch it here, high dives, ice skates, and all.) My favorite moment happened 40-some years ago, when my parents stayed at the hotel during the Democratic Convention of 1972. More recently, the Fontainebleau made a bold move into its future, undergoing a massive, $1 billion renovation that brought in some 1,500 rooms, celebrity chef restaurants, nightclubs, and a 40,000-square-foot spa. This is a the place to come to live large. 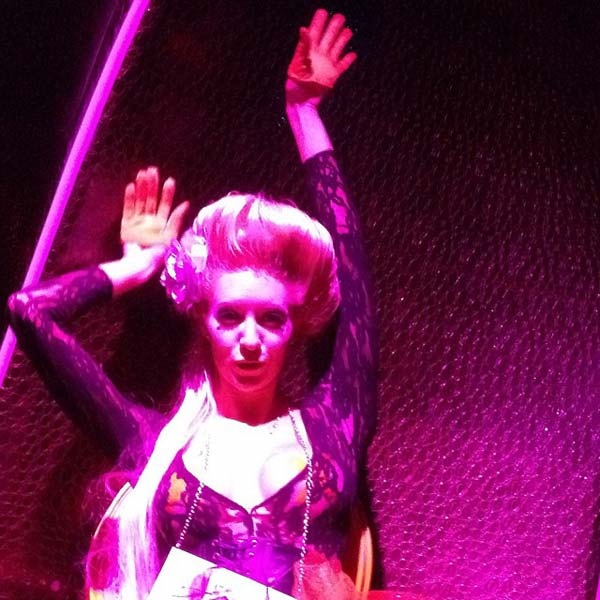 And in fact, fun and decadence were the theme of the weekend. In truth, I was a little concerned whether my friends and I, in our ripe mid-30s, could still party Miami-style.

I was dreading the obligatory club outing, worried I'd be the too old, too uncool dinosaur amid the gaggles of teens and twentysomethings drenched in Red Bull. The last time I was in hit clubland was when DJs Sasha and Digweed were playing New York City's Crowbar, circa 2000. I mentioned this to a club-goer who told me that those guys "were vintage" and that I must be "really old." Yeah, well, you might be right, kid. (And you will be vintage too, soon.)

I was with some serious Las Vegas club-goers, so it was only a matter of time before I found myself at Story, an epic, multi-storied club on a night headlined by DJ Chuckie. 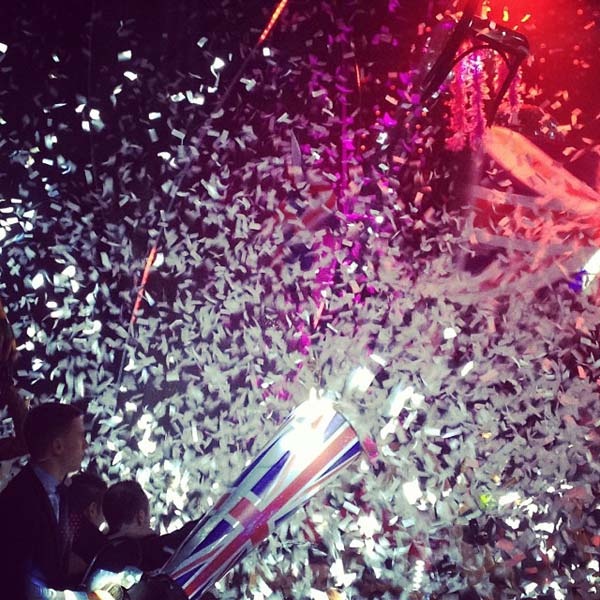 The place was alive and bursting with scantily clad, costumed girls on stilts at the entrance welcoming the crowd. Inside, the women are half-clothed. They're not quite burlesque in a striptease way, but they're frisky and risqué. They wear signs around their necks that read, "Don't feed the hookers." It's all part of the act, over-exaggerated, theatrical, and perverse. The entire scene felt like a mod spin on a Moulin Rouge variety show crossed with the costume-y flair of Marie Antionette.

On stage, Chuckie spins progressive house without filter, and it's a full-blown production of laser-sharp lights and disco balls. The music and room shake and pulsate, heads bop up and down, hands and arms wave in the air, the lights illuminating faces and dance moves while whistles and confetti explode in the air every time the cork pops off a magnum of Dom Perignon, which happens often.

Sometime around 4 a.m., we left the new and sauntered into the classic, Jerry's Famous Deli, for grilled cheeses and French fries. The sun was showing her face as I drew the curtains in my room. It was the theme of the weekend that never let up: No rest for the ageless wicked. 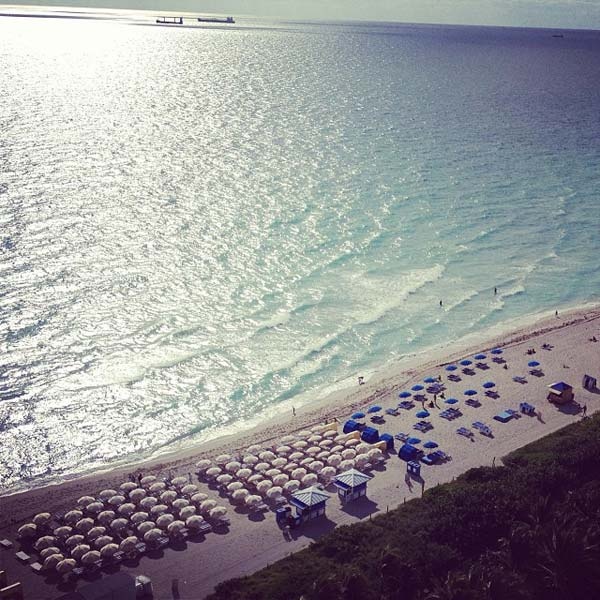 The view from Kate's room at the Fontainebleau.

Miami right now is all high glamour, rhythmic music, and Champagne dreams. It's Vegas at the beach. Here are my highlights:

A Downtown Miami dinner at the mod, warmly-lit sushi shrine Zuma, where the tasting menu, a diverse range of tastes and textures, is best accompanied by a stellar bottle of nigori(unfiltered sake).

Lunch at San Pocho in Little Havana, where I ate well-seasoned and massive portions Colombian comfort food: empanadas and sancocho (meat-and-vegetable soup). I stopped into the attached shop for Colombian gifts of straw hats and coffee. 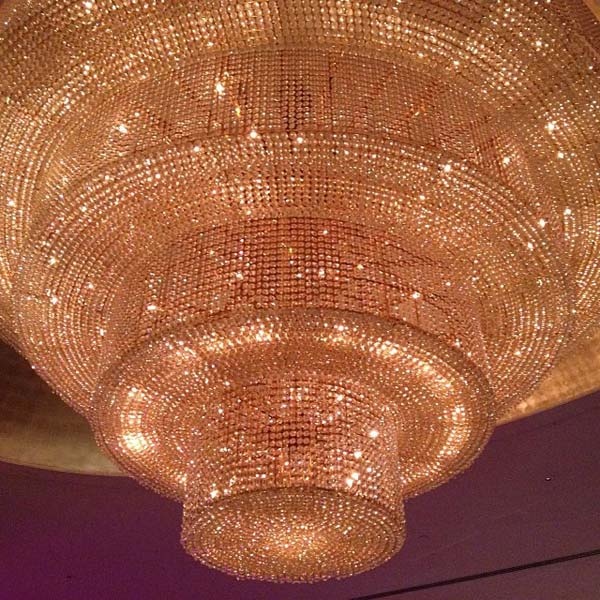 Ai WeiWei chandeliers at the Fontainebleau.

At a poolside cabana at the Fontainebleau with the birthday girl and assorted pals, I channeled the gin rummy game between Goldfinger and James Bond. Afterwards, we head to the blue-hued Bleau Bar for pre-dinner drinks, stopping to admire the stunning chandeliers created by Chinese artist Al WeiWei. A perfect start to the evening.

A 9 p.m. dinner at Baoli was an equally impressive birthday show. Constant sparklers in motion. We kicked off the evening with the seafood tower piled high with oysters, lobster, prawns, scallops, king crab legs, and stone crab claws and a few bottles of rose. Dinner was handmade pappardelle ai fungi with portobello, porcini, and hoshmeshi, and I'm officially stuffed. More fireworks and sparklers make their way through the attractive crowd. Another bottle of Dom arrives. The music is blaring. It's dark and the long wooden table is encased in candlelight and a good-looking crowd. So this is what it's like to live in a rap video. 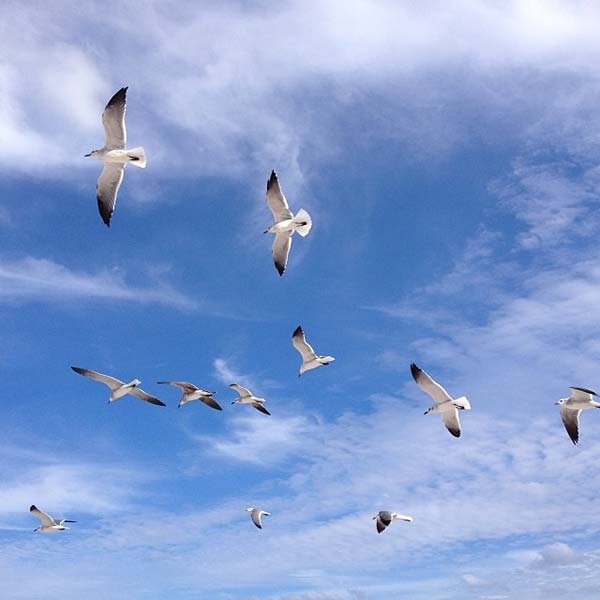 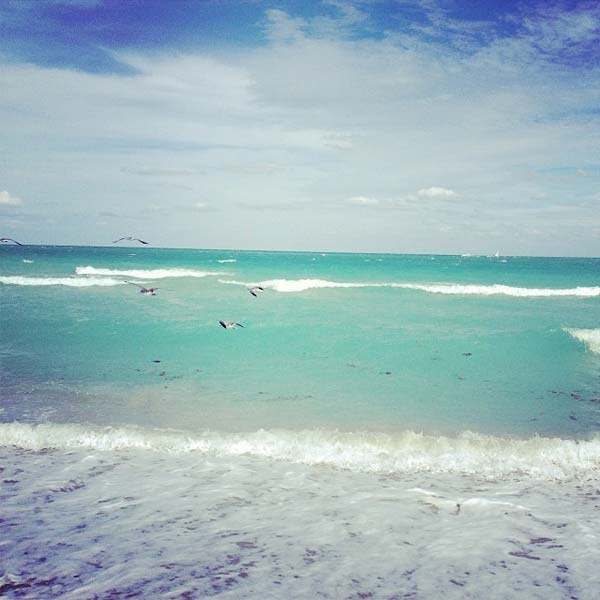 Recovery: a relaxing walk on the beach, getting my feet wet and exfoliated as the warm winter sun graces my face.

Before leaving town, I wound down with a delicious if expensive $18 mojito (apparently, they're printing money in Miami) at the venerable Delano Hotel. Perched behind a pair of dark shades watching the pool crowd spells out a new study in voyeurism. 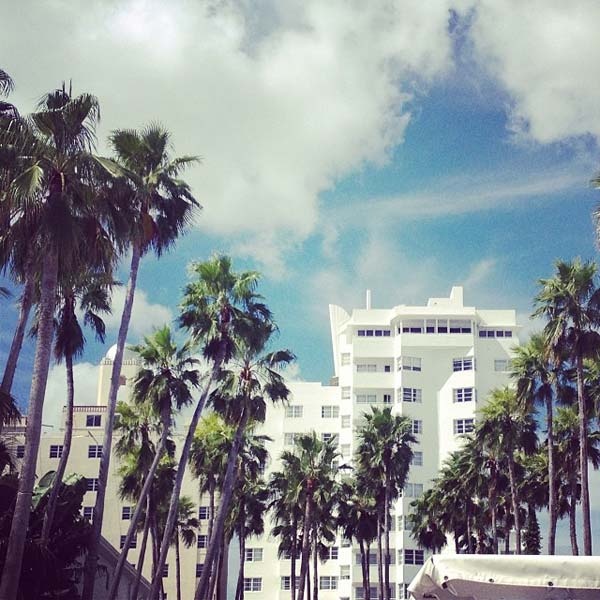 Fathom's Miami Guide
Detoxing in Miami. Of All Places