Equal parts serenity and history are found at Lisbon's Palácio Belmonte, a beautiful Portuguese guesthouse in a 600-year-old palace that is no longer taking guests. This one's for posterity!

LISBON, Portugal – Everyone seems to be going to Portugal these days. Lisbon and Porto are undergoing a major cultural renaissance, gracing every traveler's hot list. Both cities were recommended to me by followers while I was live-streaming on Periscope last fall. When my mother asked how I wanted to spend my birthday this year, Portugal was the first word out of my mouth. We headed to Porto and Lisbon and I already can't wait to go back. My first stop when I return? Palácio Belmonte. Once I checked in, it was pretty hard to leave. 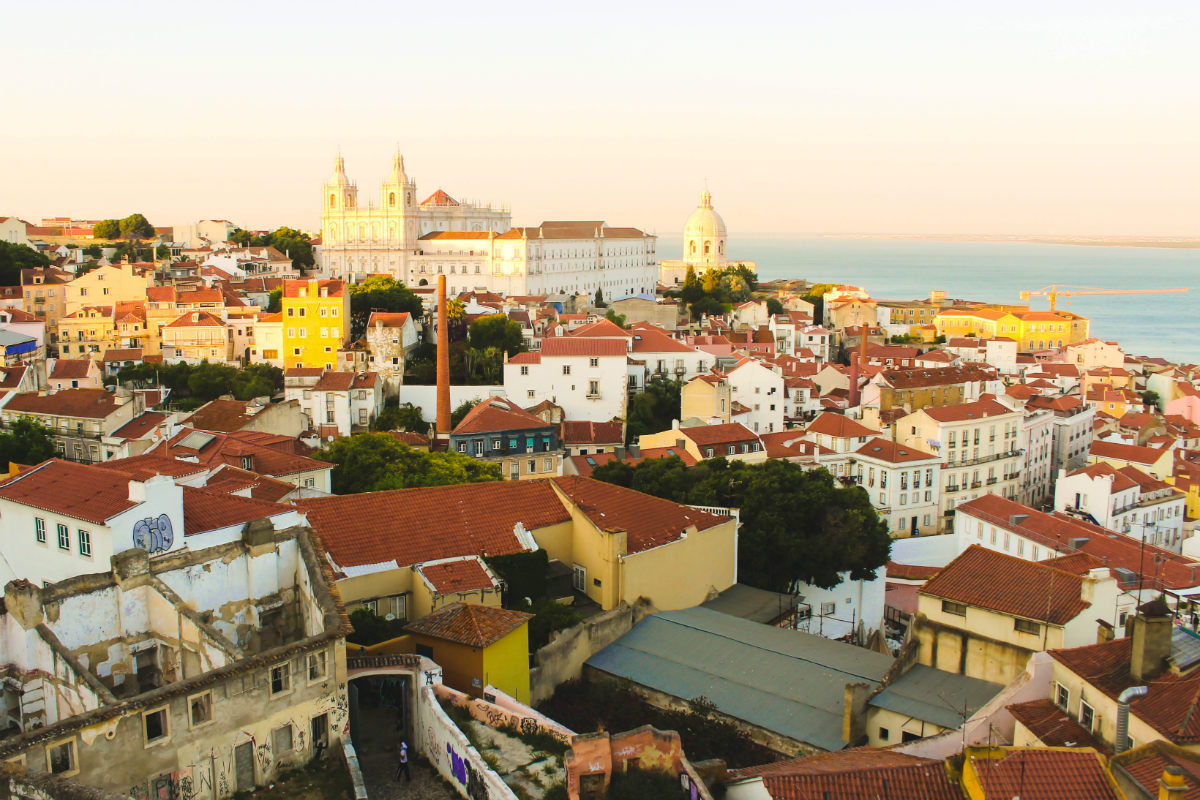 "Look at the white arch with a big red gate for a floating flower cube — that is Palácio Belmonte."

This is the text I received from the manager of Palácio Belmonte, which set the tone for the next few magical days. The guesthouse is located in the Alfama, the oldest district of Lisbon, and the neighborhood is laden with the city's and country's ancient history. The castle is where the Crusaders defeated the Moors in the 1100s. The property itself is built into Roman and Moorish walls dating back to 198 B.C. Palácio Belmonte is the former residence of a noble family from the mid-1400s, and with it's ten palatial suites and common areas, I too felt like medieval Portuguese nobility. 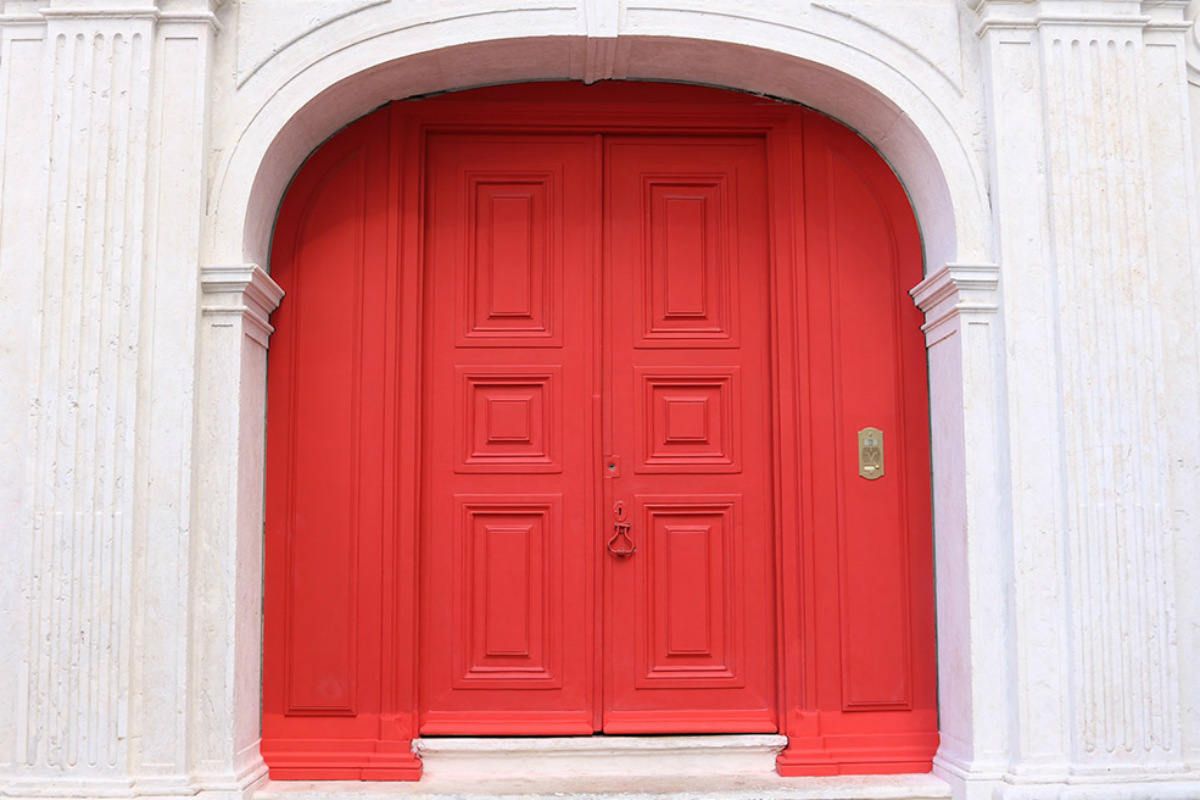 The bright red door that serves as the grand entrance to Palácio Belmonte. Photo by Samantha Wender.

Ecologist Frederic Coustouls and his wife, artist Maria Mendonça, purchased the property about fifteen years ago. It took them six years to restore the grounds and revitalize many of the original frescoes and azulejos that still compose the wonderful decor. There are antique rugs and an impressive art collection and seasonal exhibitions. The library has thousands of leather-bound books from Frederic's personal collection (he reads a few books a week). It is a palace, with several towers, so if you're anything like me, you will get lost a few times a day. But that's the beauty of Palácio Belmonte; Every time you get lost, whether it's in a courtyard with bougainvillea spilling over walls or through a side room leading into the kitchen, you always discover a hidden gem. (If you are intent on getting somewhere, Frederic, Maria, or another helpful staff member will be around to guide you.)

This guesthouse is the epitome of luxury, truly one of the best in the world. Not that cookie-cutter luxury, but unique and homey, inviting and caring. Palácio Belmonte seamlessly balances modernity with old-world opulence. Once you're here, you're in the heart of Lisbon's history, so don't feel too guilty about your overwhelming desire to stay in and not explore the city. 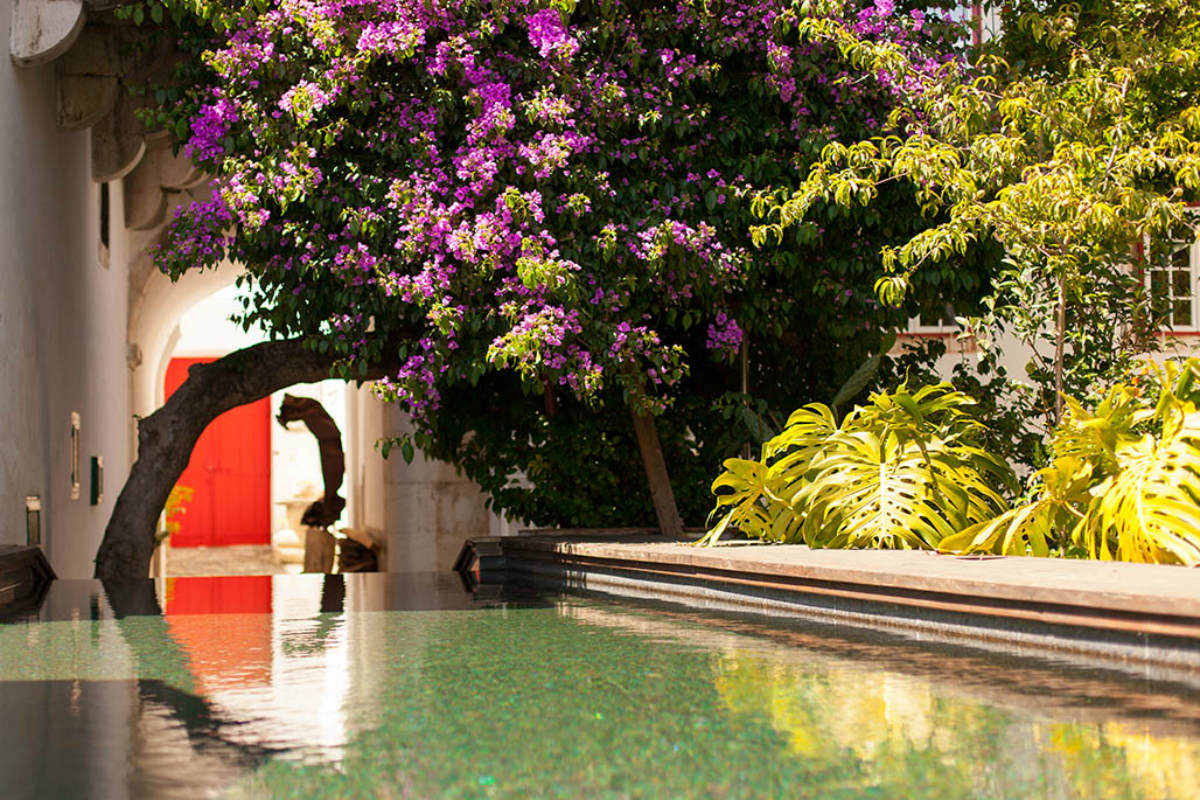 Bougainvillea abounds in the courtyard. Photo by Nneya Richards.

It's almost as if the world is divided into those who know about Palácio Belmonte, and those who don't. (Good thing I'm telling you.) Once you've stayed at this incredible property, the tone completely changes; It's as though you've attended an elite institution. Palácio Belmonte has been home to big names such as Jeremy Irons and Christian Louboutin, as well as countless international aristocrats. The emphasis on home is so palpable that once you've stayed at Palácio Belmonte, it's very likely you will return to the family.

When restoring the palace, Frederic simultaneously wanted to modernize the building and restore it to its former glory, and looked to time-honored techniques of the past. Natural ventilation replaced air-conditioning, the architecture strategically employing windows and natural shade to maintain the perfect temperature throughout the palace. There are no elevators but there are steps all over to encourage healthy movement. There is a first floor suite recommended for those with mobility issues. This is not your standard luxury hotel — no minibars and no televisions — guests are meant to engage with the space and each other. Listen to the birds in the garden, swim laps in the pool, or play the piano in the music room. (If you must be connected, know that the WiFi is excellent.) 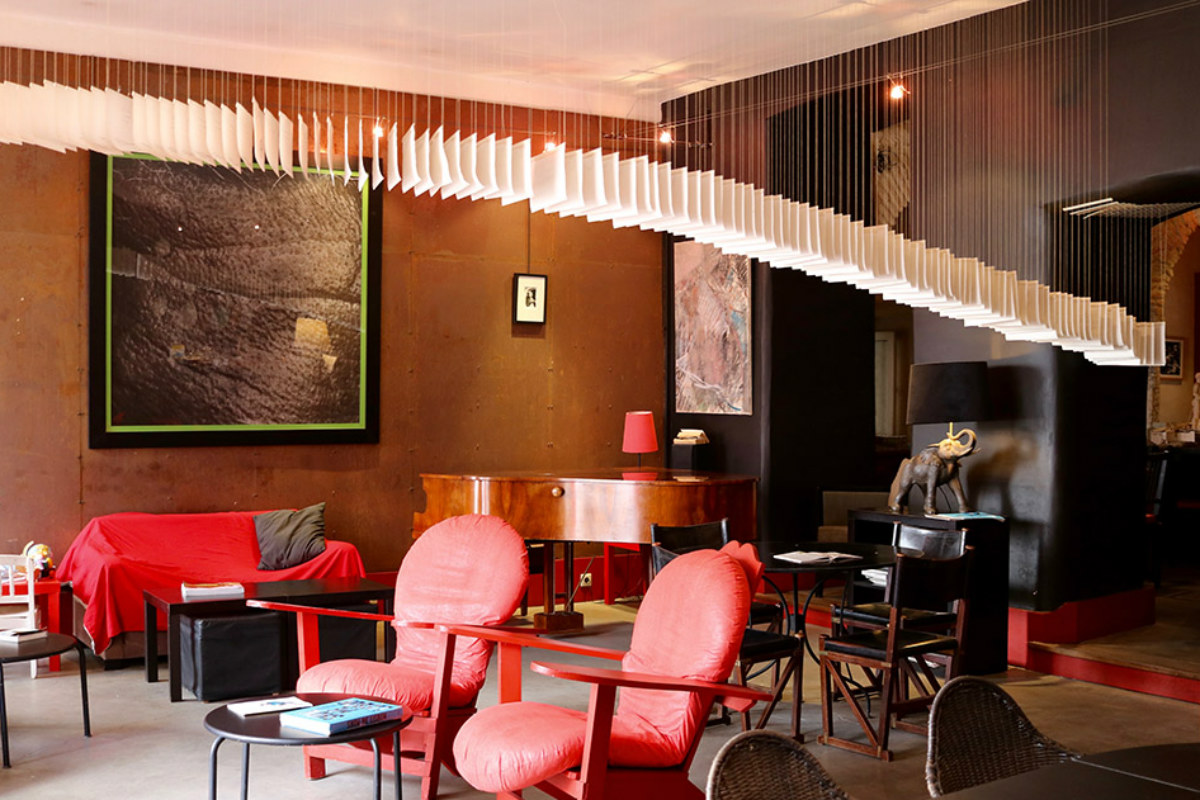 The grand piano in the music room. Photo by Samantha Wender. 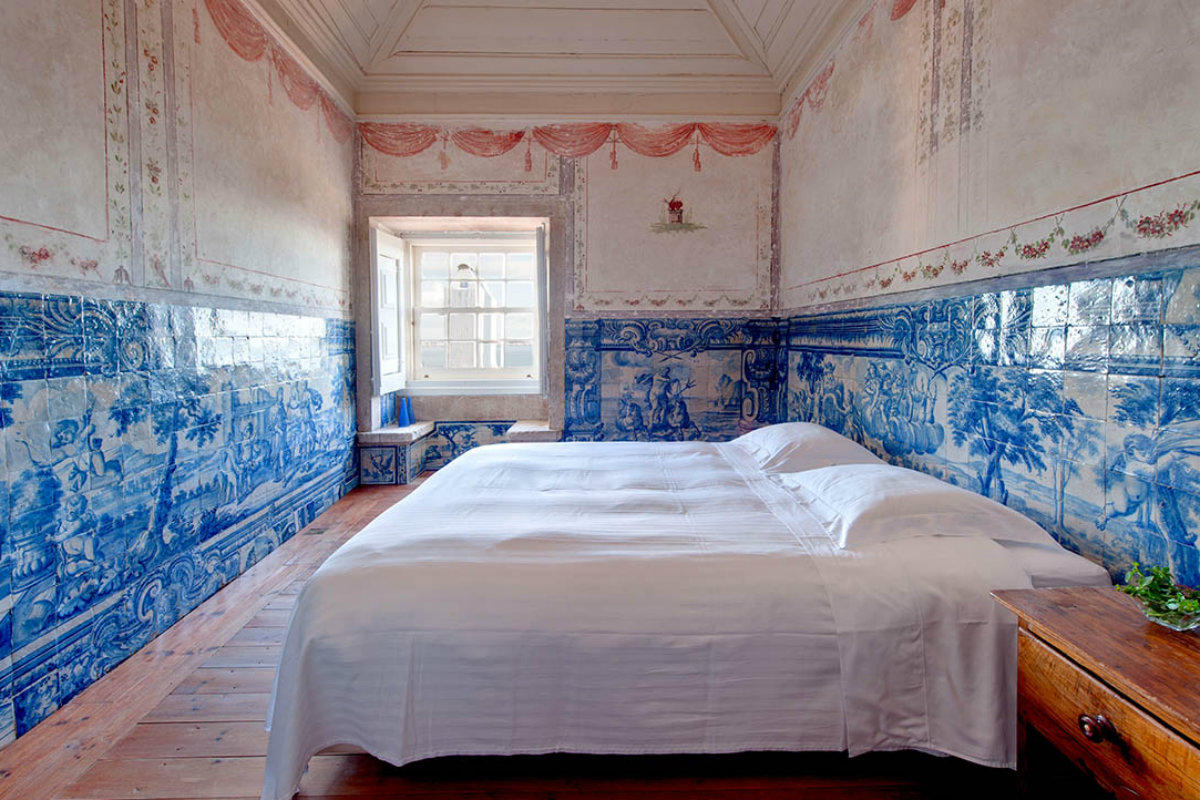 Azulejos — so old, so beautiful. Photo by Joe Condron.

One of the most outstanding features of the palace are the 59 panels (in the public spaces as well as one of the suites) of restored azulejos (tin-glazed ceramic tiles) that were commissioned in 1720 and 1730 by the Portuguese noble family.

You may feel like you have the nooks and crannies all to yourself, but the inviting atmosphere makes you want to get to know your fellow guests. Do as you please, while listening to fado music and making yourself gin-and-tonics at the self-serve bar in the lounge. 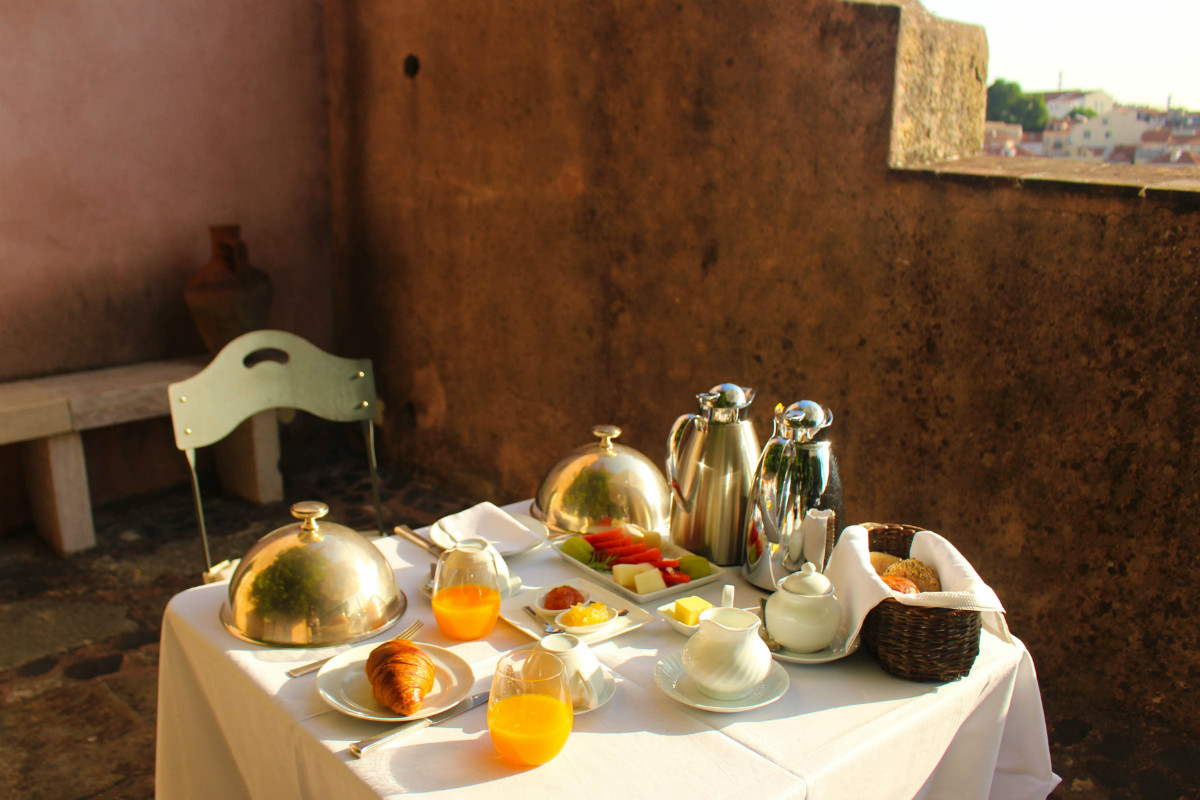 Breakfast on the honeymoon suite terrace. Photo by Nneya Richards.

Healthy, organic, and natural. That's what to expect while dining at Palácio Belmonte. Place your breakfast order before bed, and it can be delivered to you terrace (mine overlooked the river). While the property's restaurant is currently closed for a revamp, I was able to grab snacks from the delicious Cultural Club Café on site. (If you're not staying at the hotel, I suggest having lunch here so that you can soak up the place.) I wasn't aware there was room service, but when my mother sprained her ankle, a beautiful multi-course dinner of soup, salad, and fish appeared in our suite as if by magic.

The ten suites are equally as majestic as the common areas, each suite a feast of colors and interior design. Consistent throughout all the rooms is Palácio Belmonte's immaculate attention to detail, from the permanent decor to the in-room books. The Amadeo de Souza Cardosa suite, with its dark woods, chill library, and lofted sleeping area, feels like the most sophisticated bachelor pad. The Ricardo Reis terrace suite actually has original azulejo tile panels by Master Valentim de Almeida as well as original frescoes. There's also a small kitchen and superb natural light. As for me? I felt like a princess in a castle in my honeymoon suite. 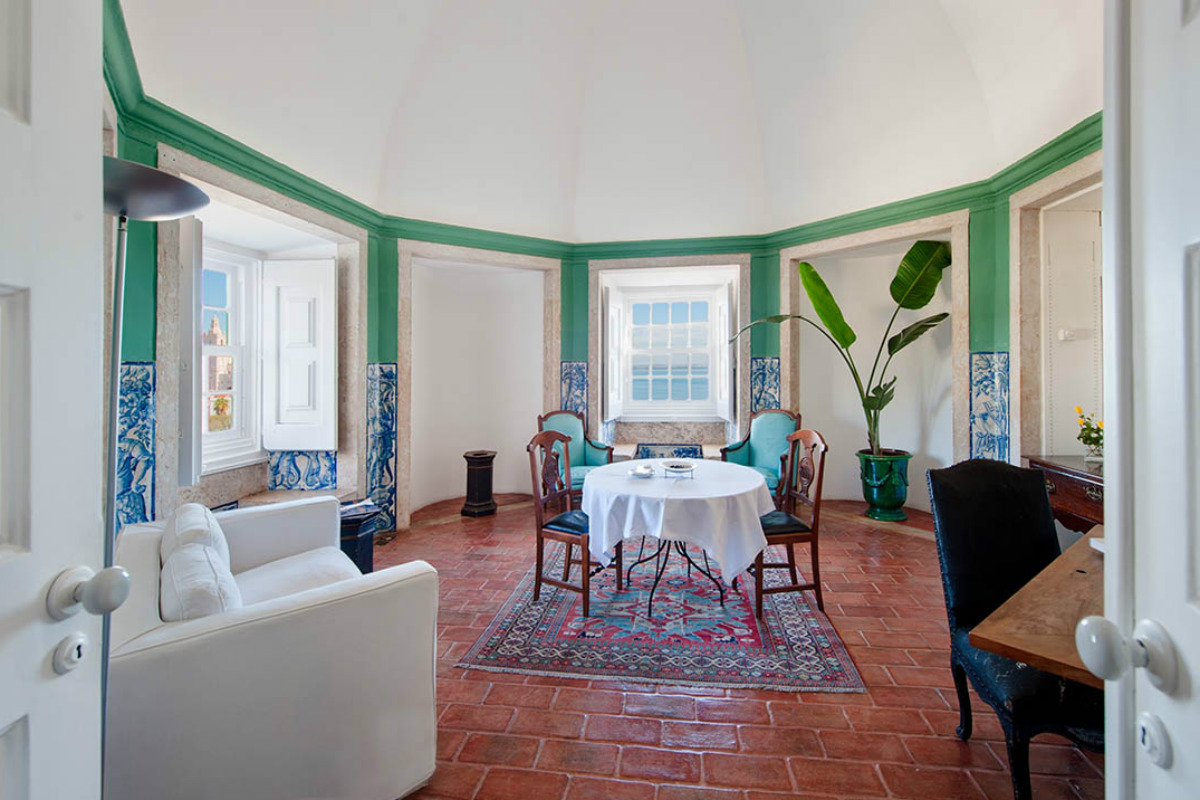 A sitting room in one of the palatial suites. Photo by Joe Condron. 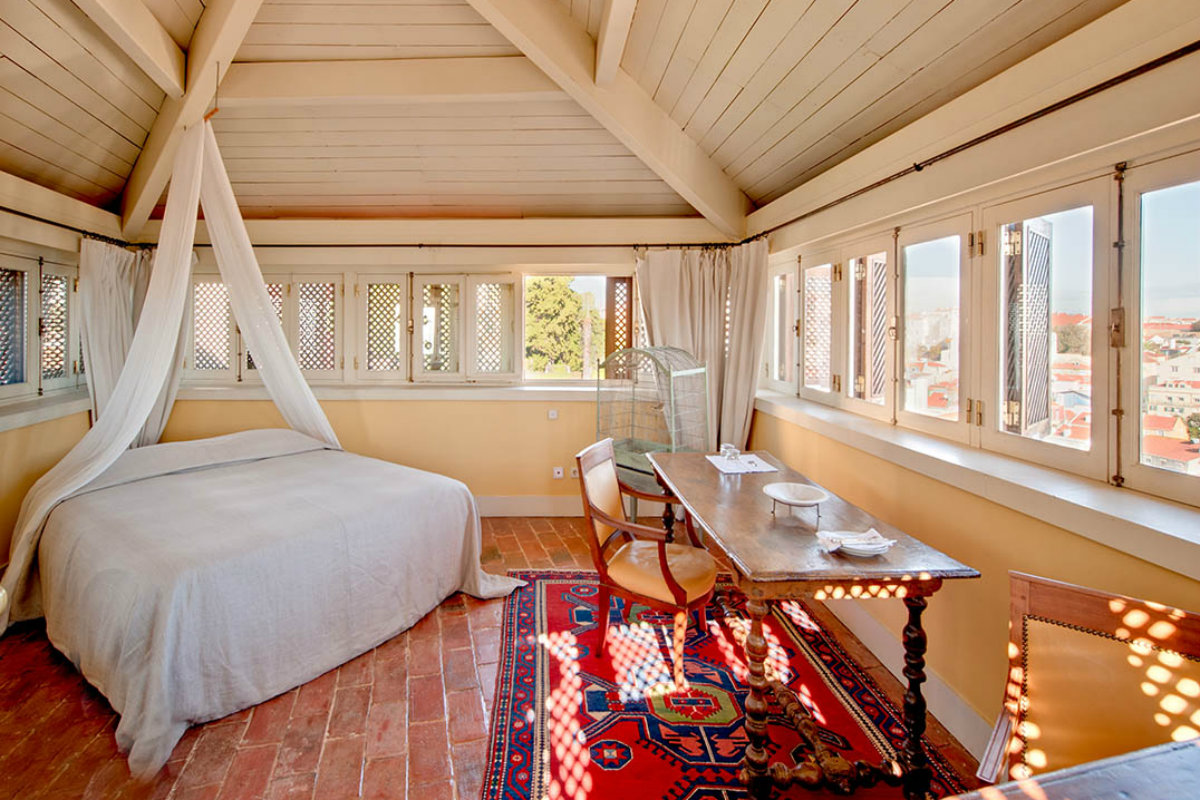 The honeymoon suite, cross-hatched windows and all. Photo by Joe Condron.

Room With a View

I stayed in the Padre Himalaya honeymoon suite, and let's just say the bar was set extremely high for all subsequent hotel room stays. With two floors built into the Roman tower, 360-degree views of the Alfama district and the River Tagus, and a full marble bathroom (as big as most hotel rooms) complete with sunken tub, this suite is the epitome of romance. There was nothing like waking up to the birds chirping and the sun streaming in through the wooden cross-hatched shutters. The beauty of Belmonte is that every suite is special, so even the lower-priced Fernão Magalhães room is luxurious and flooded with natural light, with a separate sitting room and full marble bathroom. There really is no way to go wrong here.

This Place Is Perfect for...

Checking out. That is, checking out of this century. Belmonte is perfect if your idea of a good time is exploring the history of Lisbon through the palace's art and architecture.

But Not So Perfect for... 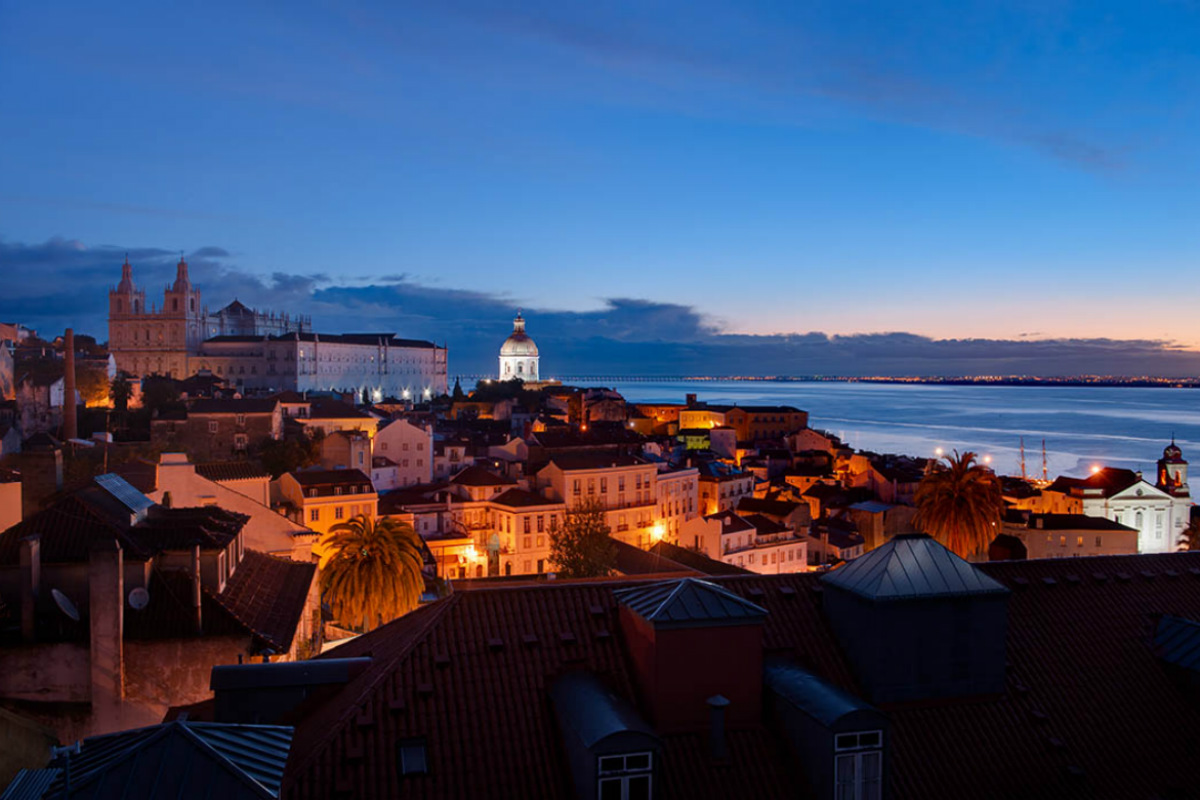 One of the first things you might see from your room is the palace's back patio, built into ruins of the ancient walls. Definitely make some time to explore this area; the graffiti on the walls will give you a taste of Lisbon's street art culture.

Palácio Belmonte is situated in the castelo hills of the Alfama district, a very old neighborhood undergoing a major revitalization. There are two sides to Alfama — the residential area and the more touristy heart of Lisbon. In the historic district, Palácio Belmonte is perfectly situated between the two.

As I mentioned, the palace is built on its surrounding walls of Lisbon's Castle São Jorge, and the entrance to the castle is just across the way. Lisbon's National Pantheon, visible from the palace, is also worth checking out. Wander down a side street and happen upon a family-owned hole-in-the-wall restaurant for homestyle cooking, like the cheap and hearty RC Restaurant near the train station. One of my favorite meals in Lisbon was pollo a la brasa from a restaurant that we found only by passing through an arched walkway, turning a corner, and stepping down into a courtyard. Wander wander wander — that's the best thing to do in the Alfama.

While you're wandering, you'll probably be lured by the sweet sounds of fado music drifting out of several bars and taverns. The soulful, emotive traditional folk music of Portugal, fado traces back to the early 19th-century. It trickled down to the streets and brothels of Lisbon from Brazilian slaves and homesick sailors at sea, giving the genre its melancholic yet nostalgic and hopeful nature. It's no wonder that it was marked as World Intangible Cultural Heritage by UNESCO. There are few better places to experience your first fado performance than in Lisbon's Alfama district. Make a night of it at Clube de Fado with its professional singers, ancient architecture, delicious food, and good wine. 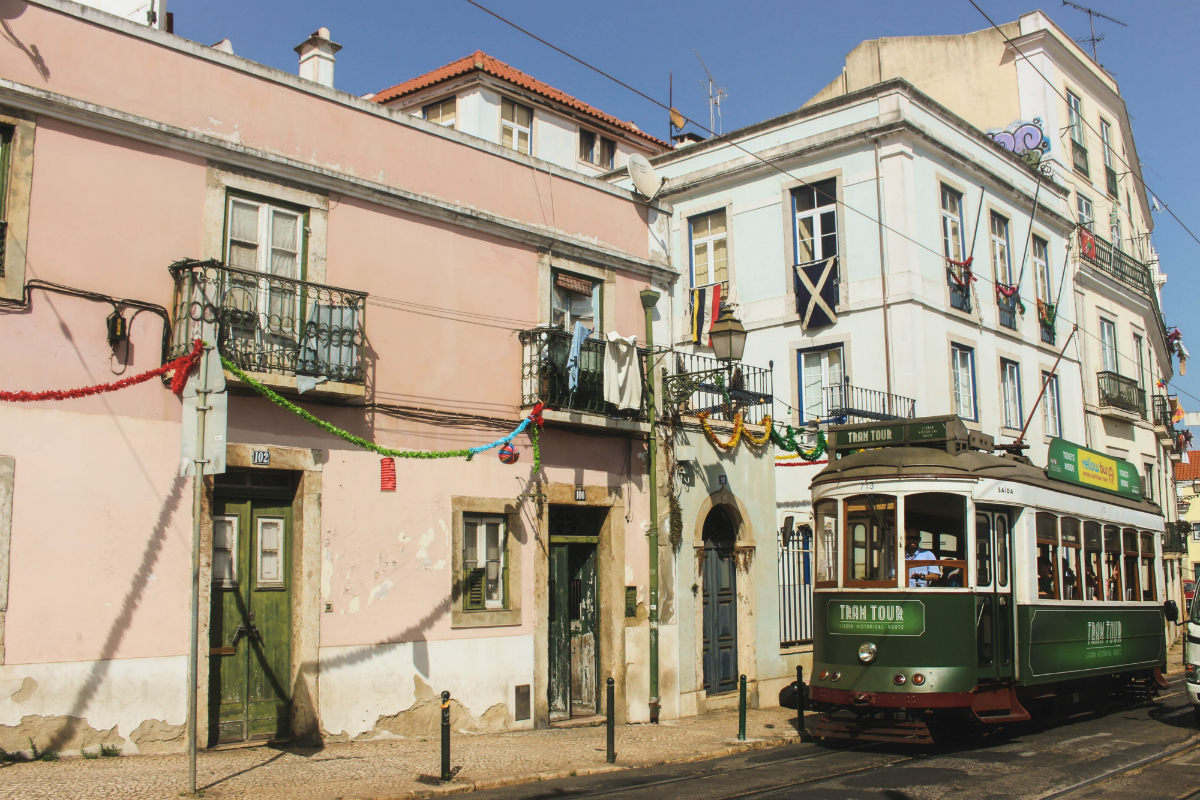 Take the trolley through the Alfama district. Photo by Nneya Richards. 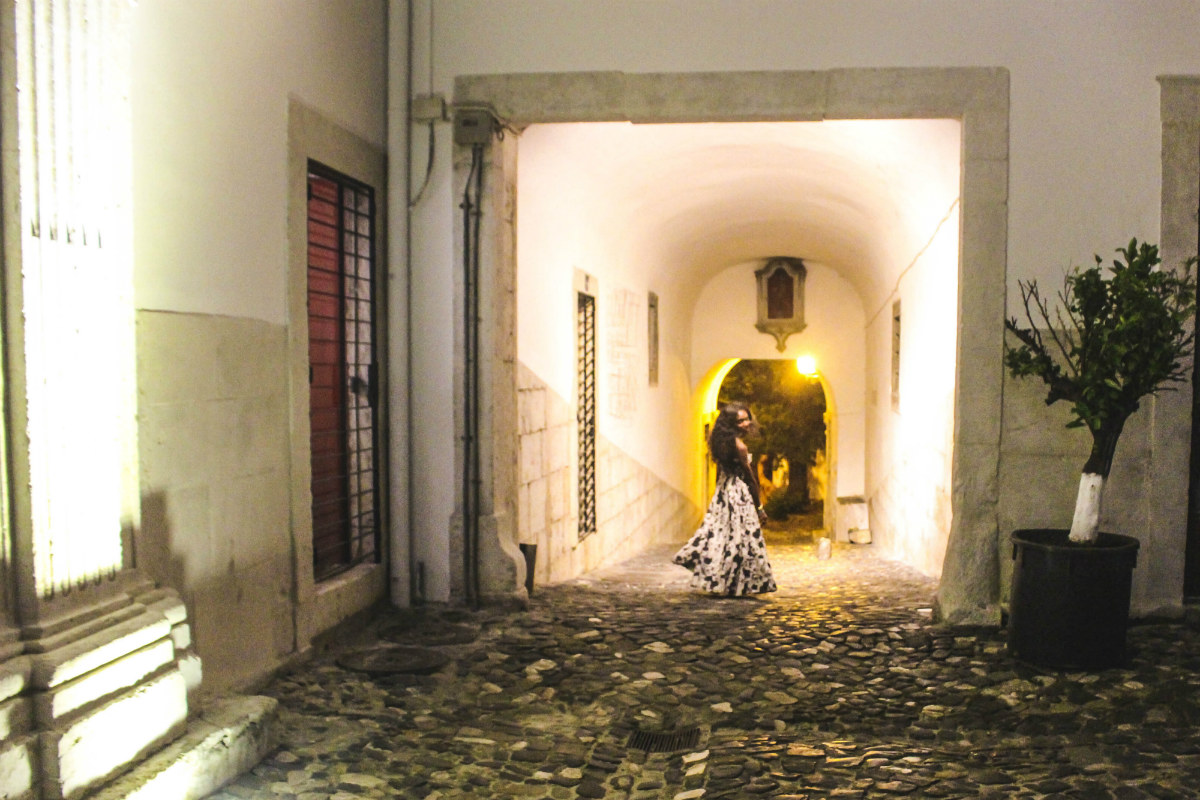 The picturesque yet tricky cobblestone streets of the Alfama. Photo by Nneya Richards.

Be careful walking around. The hills in Lisbon aren't for the faint of heart, and navigating the uneven cobblestone streets can be quite troublesome.

Lisbon Airport (LIS) is about 20 minutes away by taxi. If you're arriving by train, Santa Apolónia station is eleven minutes by car or twelve minutes on foot though the winding streets of the Alfama.

Navigating the streets of the historic district can be tricky as Palácio Belmonte is situated in a primarily pedestrian zone. If you take a taxi, tell your driver to enter Rua do Chão da Feira into the GPS instead of the plaza address (Páteo Dom Fradique, 14) that may come up on Google Maps.

Don't miss a chance to use one of Lisbon's classic yellow trams, which have been operating since the 1870s.

Rates start at €450 per night. Click here for reservations.