Team Fathom is in Italy for the month. Co-founder Pavia Rosati reports on their first meal.

SPOLETO, Italy – We I got to Italy a few days ago, and I promised we'd be writing often about our adventures. So much for best intentions. Jeralyn and I are on day four, and I'm only dispatching our first post now.

Our local host Tonello is a family friend I've known my whole life. He lives with his wife and three sons in Rome but has an apartment in Spoleto on the top floor of his family palazzo. We're living on the other floors. (Yes, "palazzo." We're pinching ourselves every five minutes that we're here.)

The ever-thoughtful Tonello proposed three options for our first dinner: a local spot with really Spoletino cuisine that his sons love for the desserts, another restaurant that also served local fare, and a newer place that "all my friends love right now." It wasn't clear where he was guiding me, so I went with option one. "Good," he said. "That's where I wanted to eat." 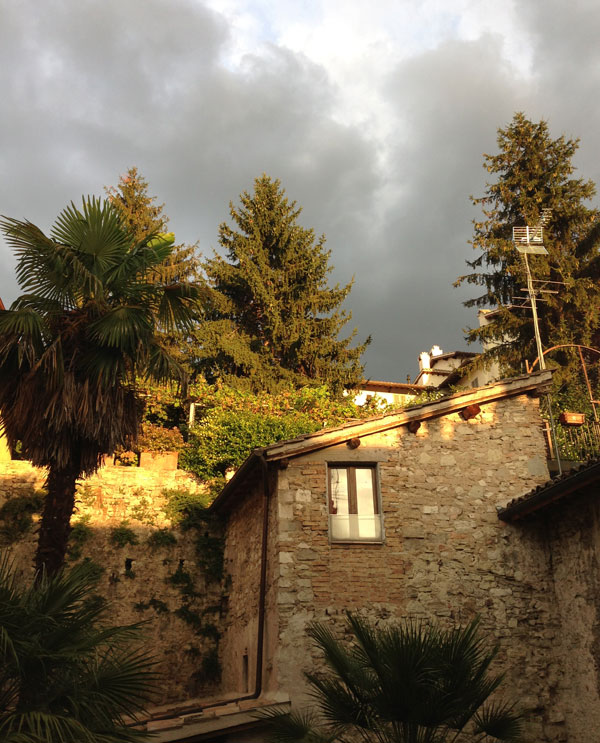 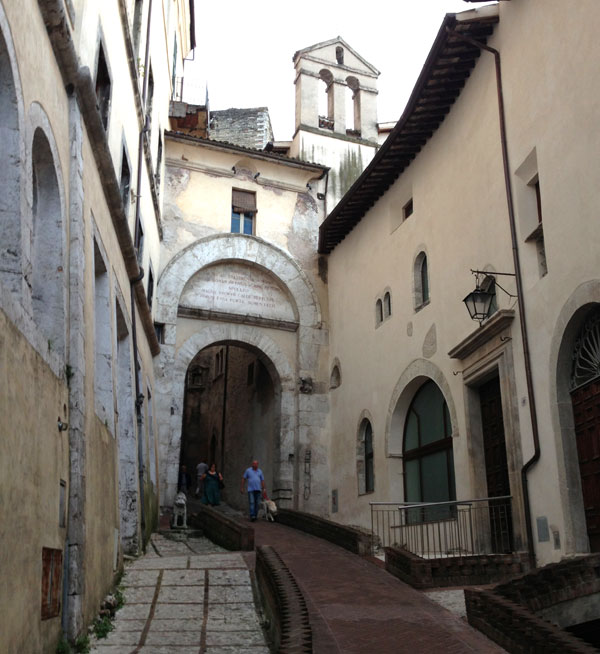 We walked through town, getting a sense of our surroundings. I've been coming here my whole life, but you look with different eyes when you know you'll be living somewhere for a stretch. Spoleto is a medieval hill town, so you can imagine what it looks like: narrow streets, cobblestones, steep ascents, wrought-iron doorways, passageways under porticos, and clotheslines between windows. You've seen the movie; we're living in it. Tonello explained some of the architectural underpinnings that have helped Spoleto stay intact through centuries of earthquakes, namely the arches that connect the buildings, which provide support when the ground shakes. If you can, you should always take an engineer with you when you walk through medieval hill towns.

The restaurant, Osteria del Trivio, is a cute, two-room space packed with tables and rustic food decor: braids of garlic and onions, a vintage scale, black-and-white photographs of locals, red-and-white checked tablecloths. The people in charge are Umberto and Mirella. He spent a lifetime on cruise ships as a waiter. She's a local girl, a self-taught cook who knows how to get you to find room for just one more course. (They may or may not be married. I couldn't get a clear answer. For all their Catholicism, Italians are very open-minded.) There was a table of raucous Englishmen and women across the room. They apologized for getting noisy when their friend walked into the restaurant. Like we cared. 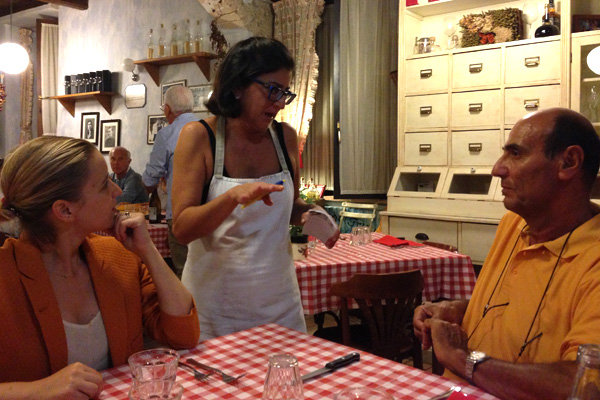 Dinner began with a few appetizers — "to get started" — a big plate of bruschette prepared four ways: with chopped tomatoes, with house-made pâté, with diced eggplant, and with olive oil meant to be treated with a clove of garlic on a toothpick by those who wanted to spread a little garlicky love on their bread. A few plates of focaccia and salumi from Norcia, the local town famous for its cured meats. (Watch this space: You'll be hearing a lot about Norcia over the next five weeks.) And a spread of cheesy goodness in the form of fresh local pecorino, melted mozzarella, a stuffed fried zucchini blossoms, and truffled egg toast. 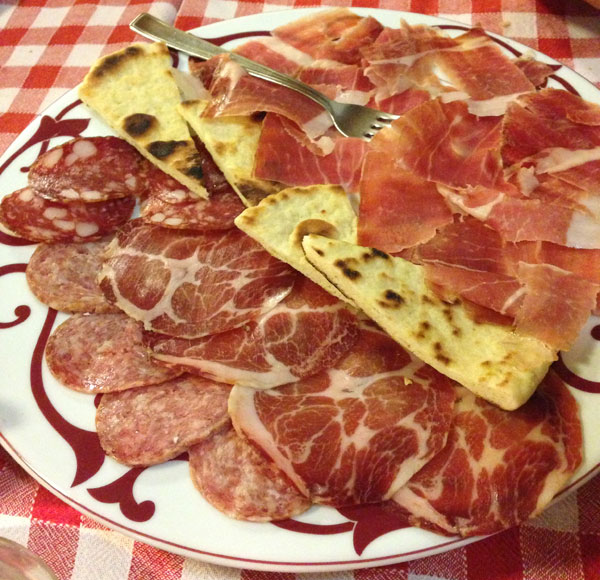 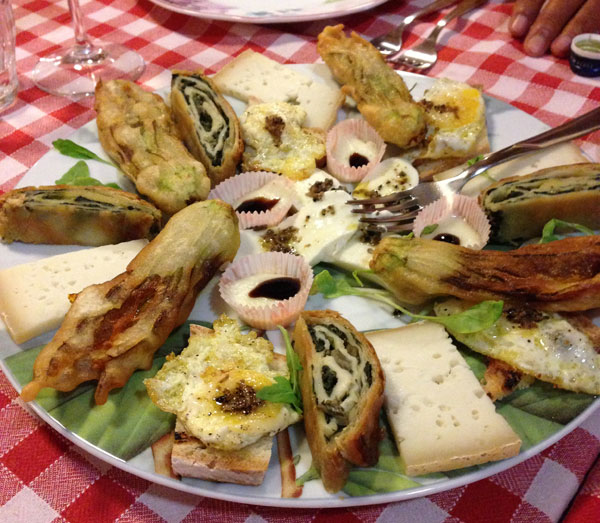 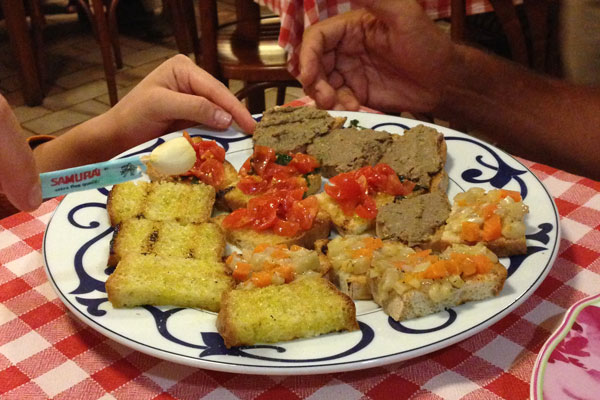 Are you stuffed yet? We weren't. Like I said, these were just the appetizers.

The primo, the pasta course, was just ridiculous: strangozzi (an Umbrian variation of fat linguini) with fava beans, pancetta, and pecorino. Now, remember that even though I've known Tonello since I was born, we're trying to make a good first impression and don't want to seem like crass Americans. Still, I dare you to eat this and not lick your plate clean. So good! My husband, Ben, has decided that while Jeralyn and I are working, he's going to learn to cook Italian food. For the past three days, I've been begging him to become Mirella's kitchen boy. 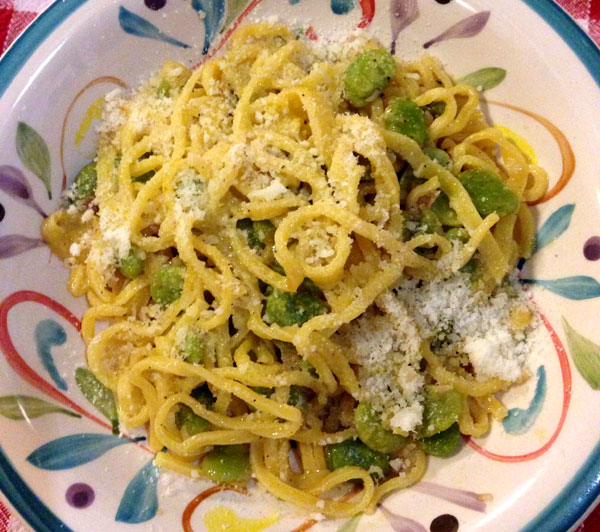 No one had room for a main course. So of course we ordered one anyway. (See: Making a good impression.) We settled on a vegatable parmigiana to share. Layers of zucchini, eggplant, tomato, and parmesan served at room temperature. Not too heavy and very delicious. Who could refuse?

Tonello's son Filippo ordered tiramisu and devoured it before I noticed that it was on the table. He texted a taunting photo of it to his younger brothers in Rome. I think they showed terrific restraint by only replying, "yeah, looks good." For the rest of us, Mirella suggested crostata and gelato, but I pointed to a plate of figs across the room and said, "maybe a few of those?" Five minutes later, Jeralyn and I were each served three peeled figs with balsamic glaze.

"Someone peeled figs for us?" Jeralyn asked across the table.

"We're never going to leave Italy, are we?" I answered. 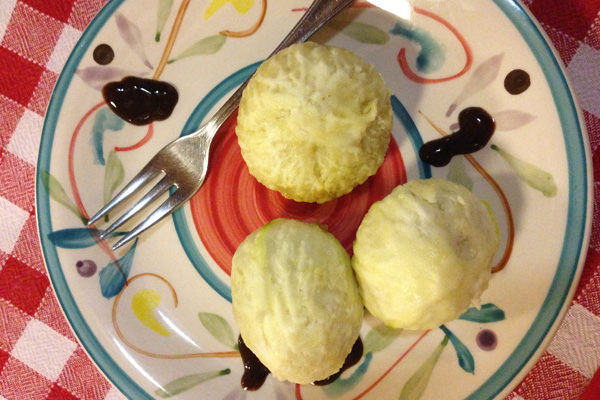 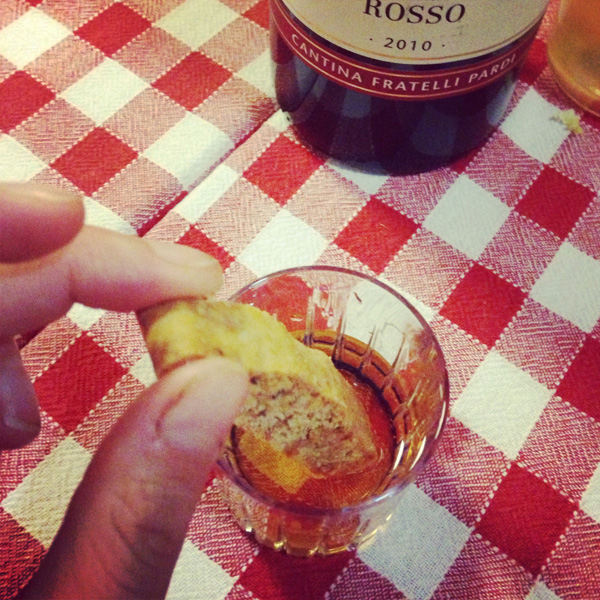 We were drinking local Umbrian wines with dinner, starting with white and moving on to red, but dessert called for Vin Santo, a winey spirit that was new to Jeralyn and Ben but is an old friend of mine. Mirella brought out a tray of biscotti and suggested that the proper way to do this course was to dunk a cookie into the wine. Mirella is a smart lady.

Read the next excerpt from Fathom's September in Spoleto.