British journalist Liza Foreman went back to the UK after a long stink in Los Angeles and found repatriation easier than expected in Guernsey, a Channel Island that mixes the best of California with the best of Britain.

GUERNSEY – And so it was that this British journalist — who relocated from Los Angeles to London this year but has never been comfortable in mainland Britain — found herself one spring day on Guernsey in the Channel Islands off the coast of Normandy — British Isles that are not part of the United Kingdom. After exploring, she declared that the Channel Islands were the new California and the perfect place to land back home.

Not French and not British, the islands are separate and unique, with their own culture and lots of sandy beaches. They feel like their own universe. Sort of like California.

I arrived in St. Peter Port, the pretty Guernsey capital, after a 22-minute propeller jet flight from Southampton Airport and set off for my hotel, The Old Government House Hotel and Spa, a splendidly repurposed property that had once been the home of the island's governor. 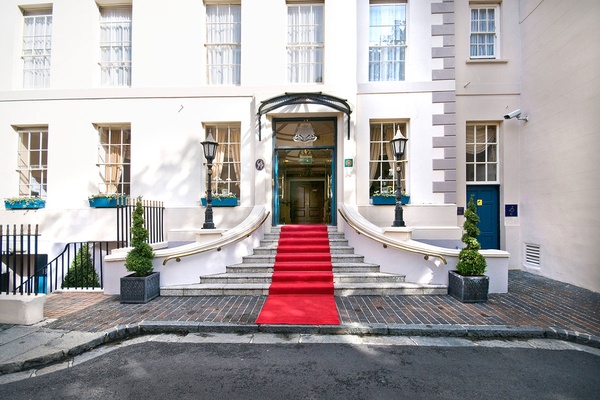 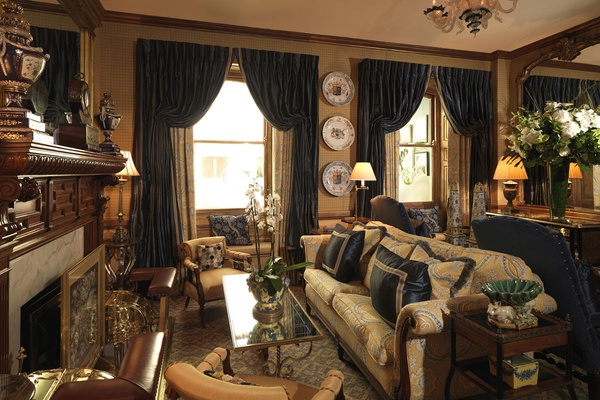 Oh, what a place. I entered the beautiful old Colonial home, perched high on a hill overlooking the colorful port, through steps leading to cream columns and an impressive front door. Beyond the old-world wood-paneled interiors, plush carpets lead past the dinky concierge desk to what quickly became my favorite work spot: a decorative sofa in front of the fireplace in the lounge where afternoon tea is served. The lounge opens onto the stylish, quietly splendid dining room and bar, and beyond that onto another tiny bar. Quaint nooks and crannies, hidden dining spots, and secluded spaces dot both sides of the hotel.

Breakfast — a scrumptious mix of scrambled eggs speckled with salmon, washed down with beetroot juice and tea, followed by an array of delicious berries and nuts — is served in the dining hall and on the lawn under the sun. Gluten-free club sandwiches are available for lunch, and dinners are delightful: steak and fries at a bar-side table with a wonderful jazz soundtrack playing in the background.

I arrived late spring, made the hot tub my second home and the relaxation space my yoga room, and went for trips to the high street down the hill. The only place I felt like I was in England was inside Marks & Spencer department store. Waiters at the hotel had accents that may be the secret ingredient for the disorientation the island provides, a disorientation enhanced by the French names that reveal part of Guernsey's history and the feeling of having reached a distant shore that not too many people get to.

I spent a delightful afternoon whizzing down country lanes with architect Andrew Dyke, who told tales of pirates and treasures looted from ships sailing in the surrounding seas. Back at the hotel, I spotted a small island on a map called Sark and decided to embark upon my own trip across the sea into the unknown the next day. 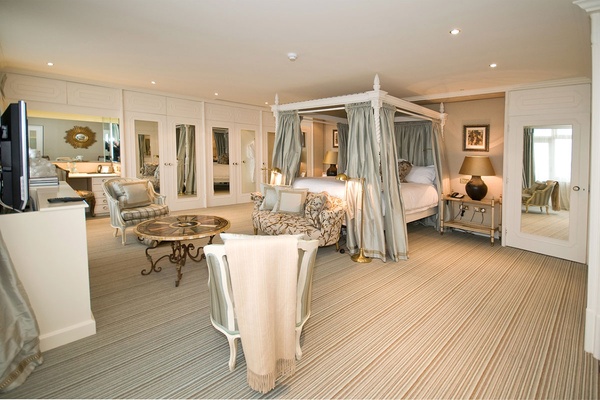 The Governor's Suite overlooking the island of Herm.

That night, I slept in one of the most romantic hotel rooms I've ever stayed in. It was truly fit for a princess, a gorgeous space painted a dreamy grey and adorned with an ultra-comfortable four-poster bed. The suite had a balcony overlooking the island of Herm and a deep tub decorated with French toiletries made with essential oils. I spent the next morning at the Old Government House pool, ordered a sandwich, and nibbled from a beautiful fruit tray left by the pool boys. The warm sunshine made me feel like I was nowhere near Britain.

I set off for Sark that afternoon and was greeted by one of Mr. Dyke's clients, David Synnott. My bags were collected by Jimmy's Carting Service, an carting company that collects luggage by tractor. Motorized vehicles are outlawed on Sark. Everyone travels by bike. 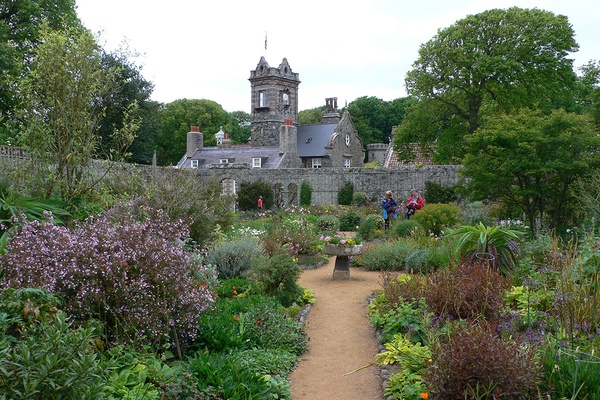 A peak of La Seigneurie from the often-toured gardens. Photo by heatheronhertravels / Flickr.

We made our way via tractor and by foot across the dusty island with beautiful beaches before ending up at La Seigneurie, the home of the island's ruler. Synnott has leased it from La Seigneur himself, Michael Beaumont OBE, who inherited the title and the property from his grandmother, Dame Sibyl Hathaway. The house is private, but I was invited to stay in the room that Prince Charles once slept in. Another four-poster bed awaited me; another beautiful old historic home in the Channel Islands. The garden grounds are open to the public and include a dove-cote, a tower, an apple crusher, and cannons.

The next morning, I returned to Guernsey for one more night in another splendid room at OGH. On a wander down plush hallways filled with art in search of more nooks and crannies, I found a cute computer room and more cozy sitting spaces. I spent the rest of my day lounging around the pool in bright sunlight, wondering if my homeland had always been this sunny, suddenly happy to be back. 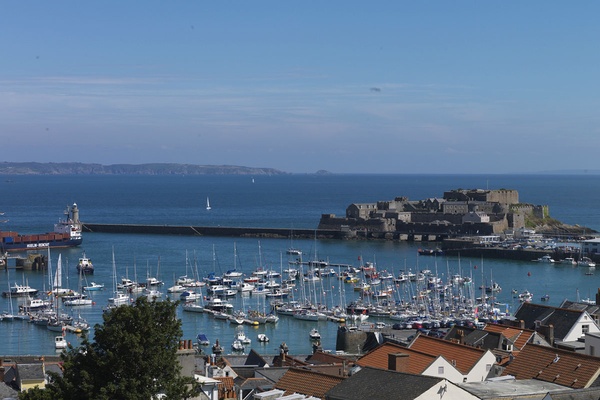 The view of St. Peter Port.