For Usha Bora, the founder of Jamini, a beautiful line of Indian-made textiles and pillows with a Parisian twist, a short visit to the French region of Normandy turned into a long-term love affair. The designer and mother of two tells us about her new home in the region and what makes it so great for families.

NORMANDY, France – My love affair with Normandy started six years ago, when I first visited Étretat, a spectacular village at the edge of stunning chalk cliffs, near Rouen. The colors and landscape of the region inspired painters Gustave Courbet and Claude Monet, amongst others. I remember my first walk along the beach, where I spotted the iconic arch — more commonly referred to as "the needle" — along the mysterious blue of the Atlantic.

Bitten by the Normandy bug, I have continued to explore the Seine-Maritime region, discovering many splendid villages, each more beautiful than the next. In the summer of 2016, I realized that my life as an entrepreneur and mother had become tiresome and hectic. In addition to my crazy Paris schedule, I make regular work trips to India and travel across the country to see family. We also frequent the United States. My heart and soul needed a refuge — a quiet, beautiful spot in the world, close to nature, not too far from Paris — in an environment full of great food made with local produce. I needed a place where time would stand still, somewhere private and warm, where family and friends could share great meals, fresh air, and a million laughs.

Normandy was the natural choice for a holiday home. We zeroed in on the area around a pretty village called Lyons-la-Forêt, named for the gorgeous beech forest surrounding it. Our friends, Karine and François, who own a beautiful and tastefully decorated bed and breakfast called L'Epicerie du Pape, played tour guide and showed us around the area for a couple of weekends in succession. Towards the end of the summer, we finally found our home in a tiny village called Le Héron. It was love at first sight. Typical of traditional Normandy-style homes, it has exposed beams, a beautiful slanting slate roof, and a garden full of the most delicious pear, apple, and cherry trees as well as a row of raspberry bushes. We knew at once that we had to have it. 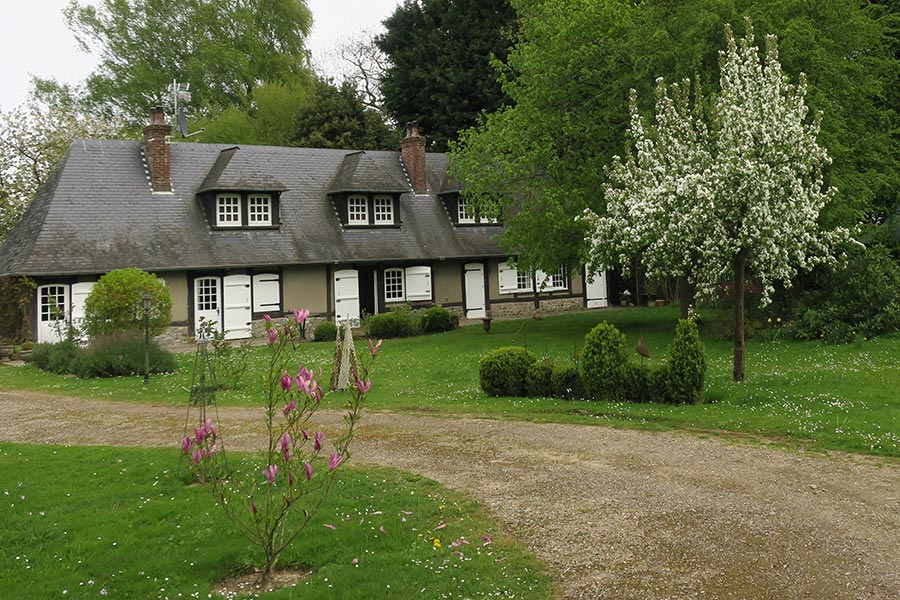 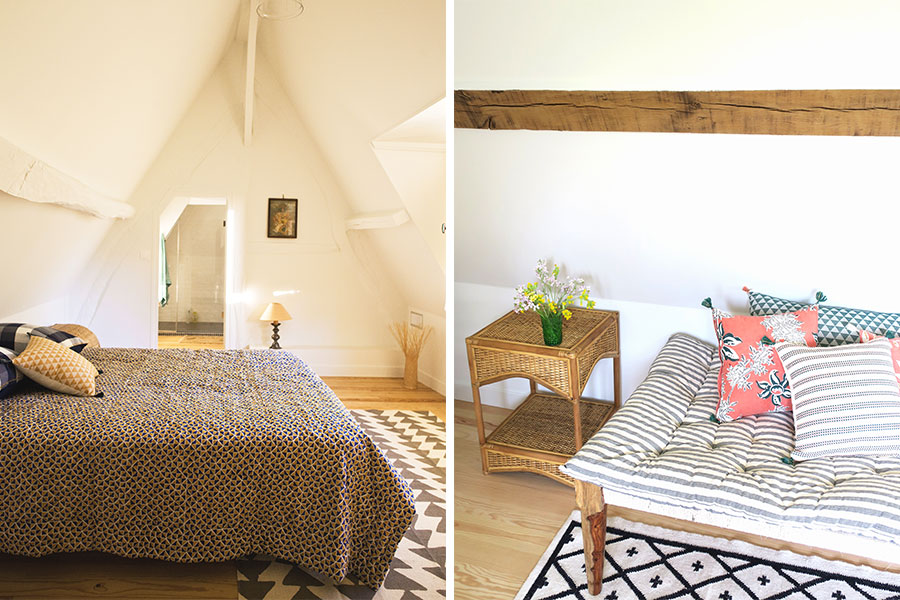 A Jamini-clad bedroom and sitting area. Photo by Claudio Cambon.

The minute we signed the papers, I named our new house #thehomewithgreatvibes. Today, we've renamed it "Les Marguerites," which means "the daisies." My daughters think it's a pretty name and half-Italian Claudio was pleased too. Margherita, the tiny village in India where I was born, was named after a 19th-century Italian queen to thank engineer Chevalier R. Paginini for supervising the construction of a bridge in the area.

We're looking forward to holidays to come. Claudio is searching out the best farmers for Neufchâtel cheese, homemade butter, and honey; my children are excited to spend hours horseback-riding and making jam; and I will spend my free time combing through the place Saint-Marc flea market in Rouen in search of furniture, Baccarat glasses, old textiles, and ceramics for our home. Here in Normandy, the circle of our family has completed itself. We have started building a nest where we speak five languages, enjoy pasta alla vongolé, chicken curry, and bisque de homard with equal relish. 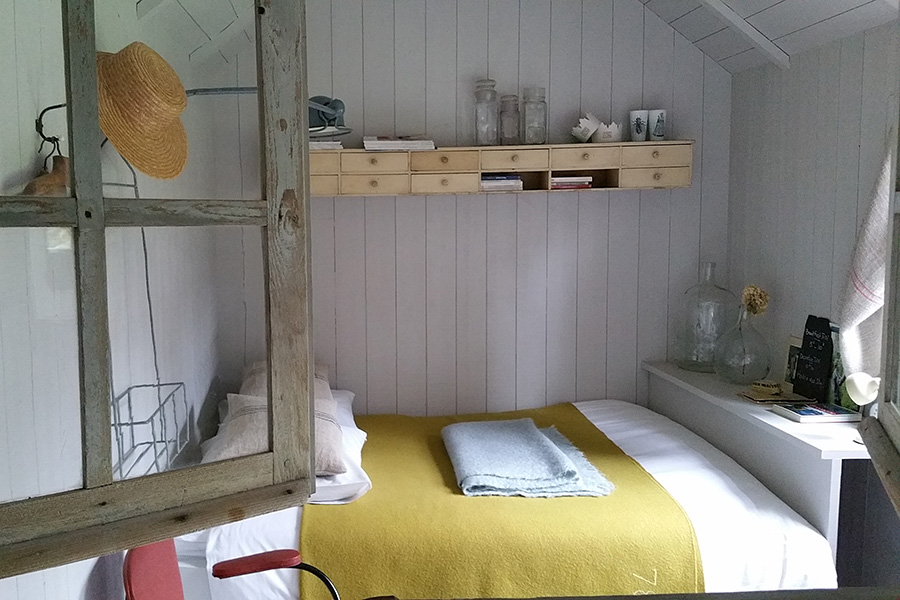 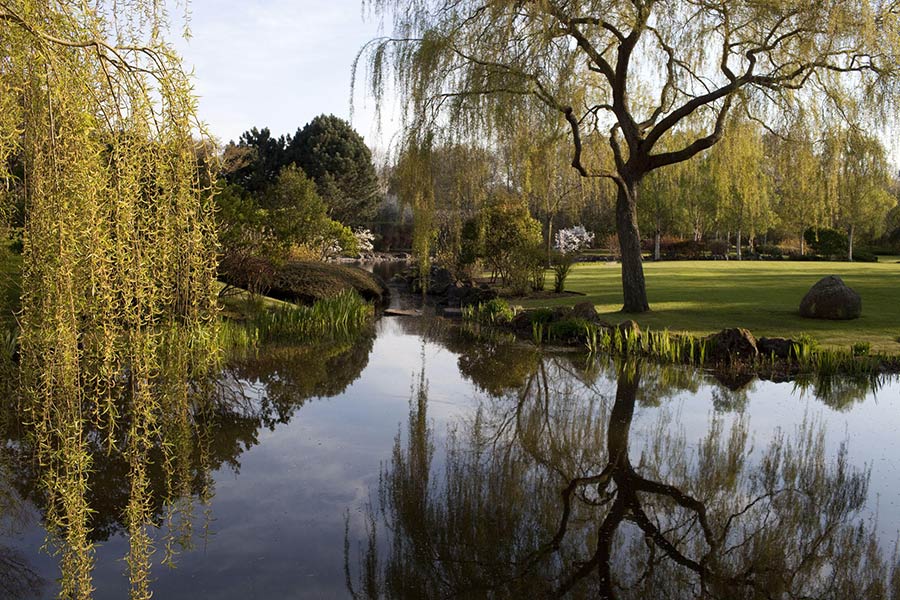 There is much to do and see in Normandy, but I find the most enjoyable activities for my family are the simplest. For a taste of more classical pleasures, we take quick trips to Rouen, where the imposing Gothic cathedral never ceases to amaze us, or Giverny, famous for Monet's garden and an Impressionist museum.

Marché de Buchy
Place du Général de Gaulle, Buchy
Open since the early 1200s, my daughters love visiting the famous market and the picturesque village surrounding it. Inside the quaint 17th-century hall you will find piglets, chickens, and rabbits for sale, along with produce fresh from the local farms. Together, we pick out ingredients for the big family dinners I dream of constantly.

Le Jardin Plume
790 Rue de la Plaine, Auzouville-sur-Ry; +33-2-35-23-00-01
Run by a local couple, the striking, seven-acre garden has razor-sharp geometric hedges and wild-style perennials. Take a relaxing stroll when there is the slightest breeze. It's heavenly.

Le Bois des Moutiers
Route de l'Eglise, Varengeville-sur-Mer; +33-2-35-85-10-02
A beautiful, 30-acre park conceived by banker Guillaume Mallet in 1898. Inside you will find a house designed by architect Sir Edwin Lutyens, gardens by horticulturist Gertrude Jekyll, and the biggest collection of hydrangea in the world (there are over 1,000 varieties). Eglise St. Valéry, a church dating back to the 13th century and perched atop the cliffs, holds the tomb of Cubist artist Georges Braque. The Manoir of Jean Ango is an Italian Renaissance home with a dovecote capable of housing 3,200 pigeons. It's one of my favorite stops in this part of France.

American Grill au Relais de la Pommeraie
101 rue des Maunys, Puchay; +33-2-32-27-96-35
We're still scoping out the local food scene, but the American-style diner is always a hit with the kids. They have the most delicious burgers and I can't get enough of the fabulous decor.

A Designer's Guide to the Tenth, the Coolest Neighborhood in Paris
The Discreet Charm of the Bourgeoisie: A Country Chateau in the Heart of Paris
Less than 24 Hours in Paris? No Problem.