NEW YORK CITY – For Eleven Madison Park, it wasn't enough to be considered one of the best restaurants not only in New York City but in the whole world. Nope. Chef Daniel Humm and general manager Will Guidara decided it was time to take the menu that won them seven perfect stars (four from The New York Times, three from Michelin) and toss it out the window. It was already ambitious and unusual, a grid-based menu wherein everything — four each of appetizers, first courses, mains, and desserts — was listed according the defining ingredient of the dish and changed constantly.

The new, four-hour, $195-a-head prix fixe, which debuted this weekend, is still grid-based - NYC is on a grid, after all. But they've turned up the whimsy and the drama as they aim to create a culinary experience that is as theatrical as it is gastronomic. New York City is the unifying theme, with classic and iconic foods and snacks reintepreted in unexpected ways no one would ever have imagined on Delancey Street in 1940. I got a preview a few weeks ago.

Sold at every deli on every corner, they're twice the size of a child's hand and look like this: 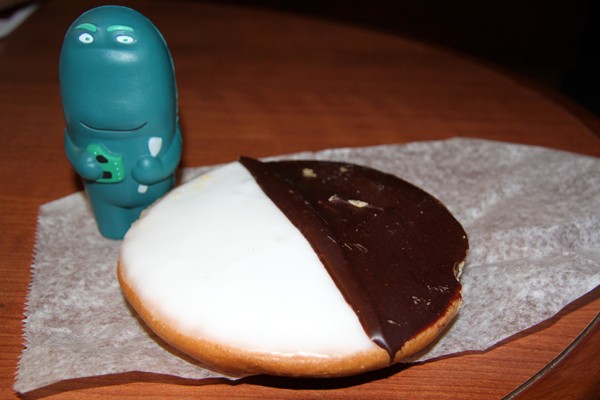 At EMP, they come in a lovely box and are not in fact sugar bombs but rather savory bite-sized Parmesan cookies with a Parmesan cream filling. The glaze is black truffle and goat butter. At the end of the meal, they serve a sweet version of the black and white: a sucree cookie with lemon and chocolate glaze and apricot filling. 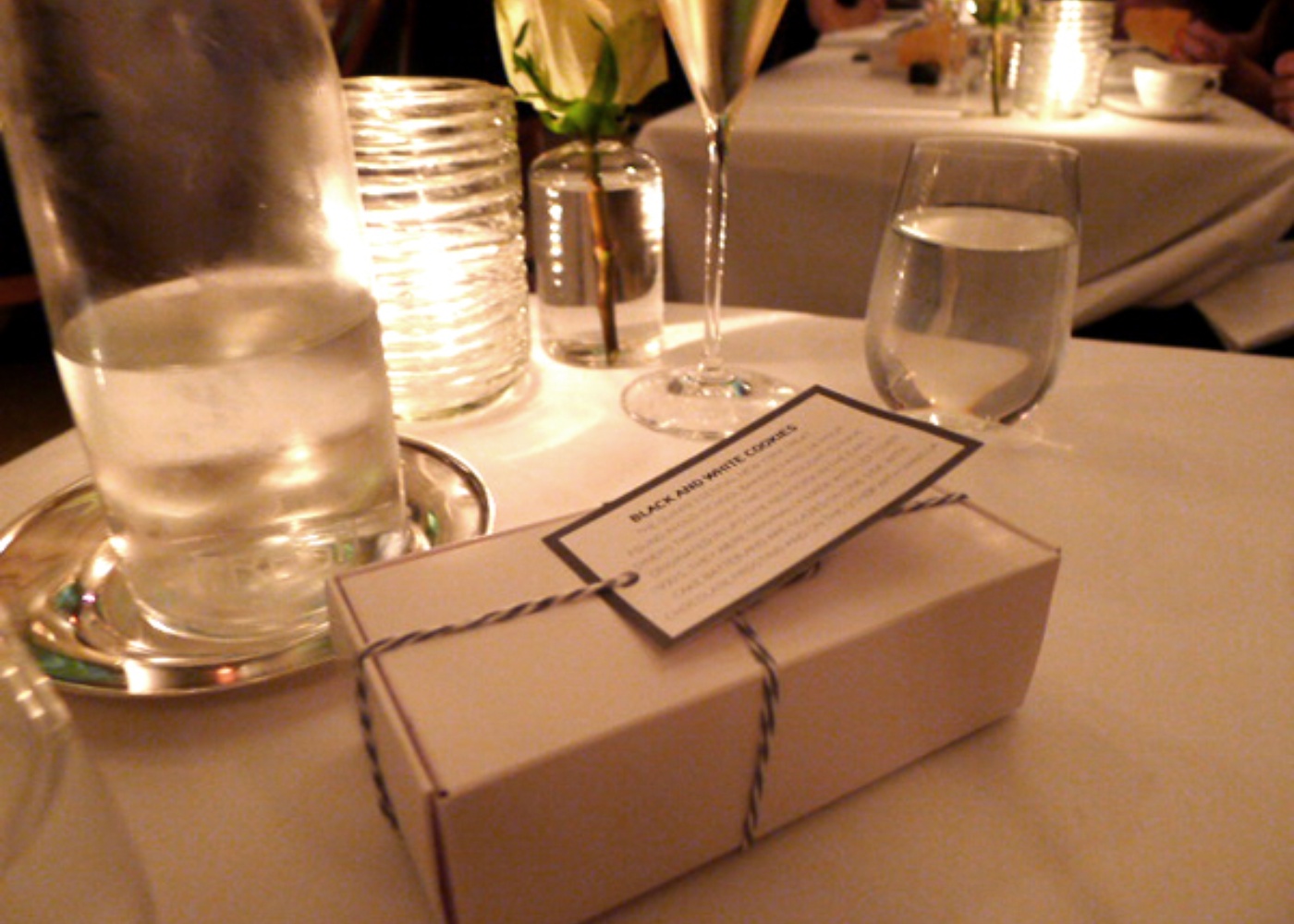 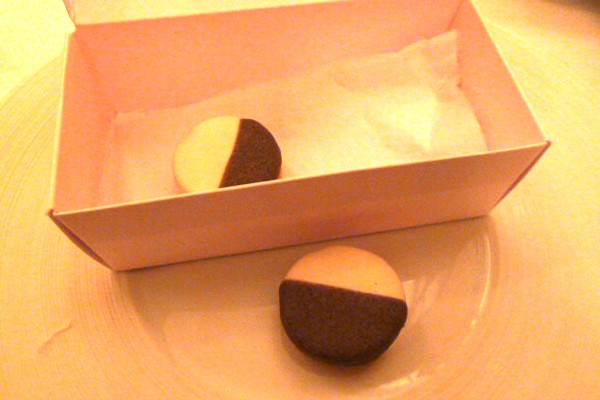 By the way, I've lived in New York for twenty years, and these were my first black and white cookies. 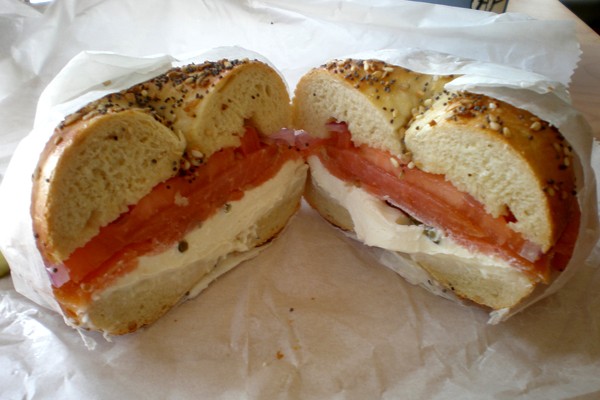 EMP serves a smoking platter — literally, it's smoking under the glass dome — of sturgeon smoked over moss, flowers, and applewood. 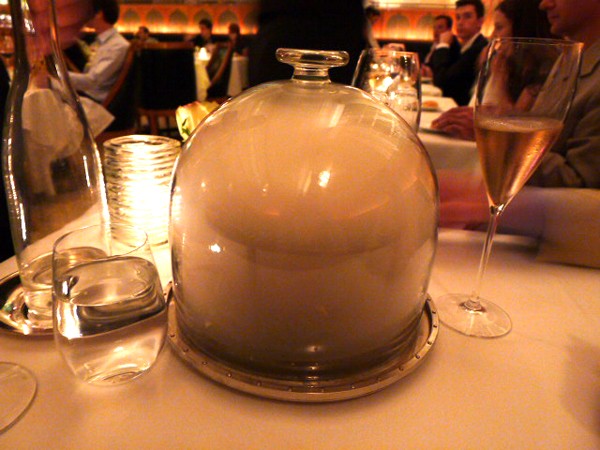 Chef de cuisine James Kent explains what we're eating as the entire restuarant looks on. Yes, the photos are grainy. I'm not one of those people who thinks flash is okay. 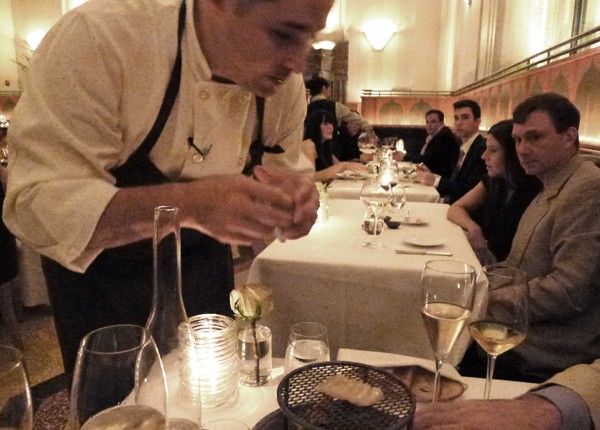 When you lift the dome, the applewood smoke infuses the air. Here's a close-up on the sturgeon above the mossy, floral goodness. 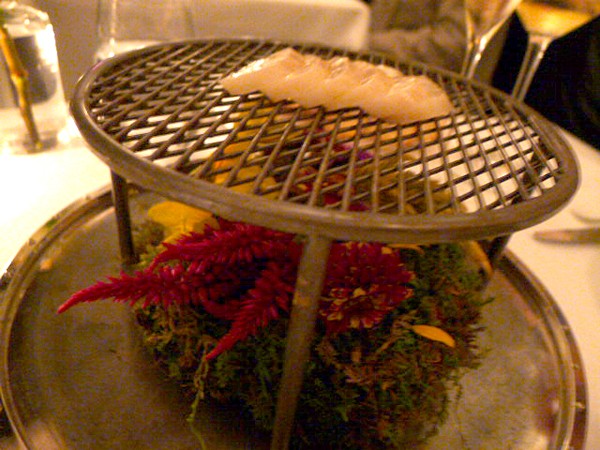 The table looks like this when they finish serving everything. At the place settings: romaine lettuce dressed with everything bagel topping (the best part!), quail eggs, and pickled shallots. On the lower right: creme fraiche topped with a layer of caviar in a caviar tin. Also on the table: homemade pickles and toasted rye bread crisps. Time to go to town. 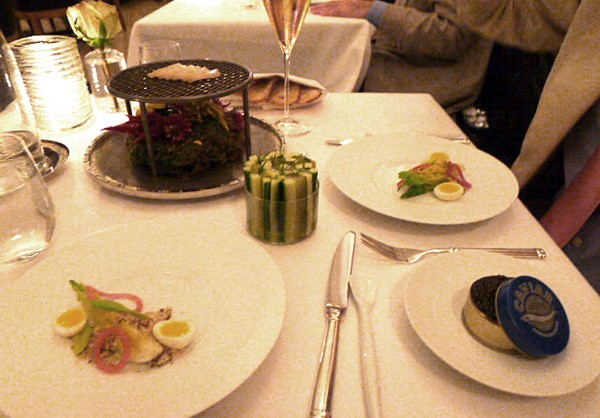 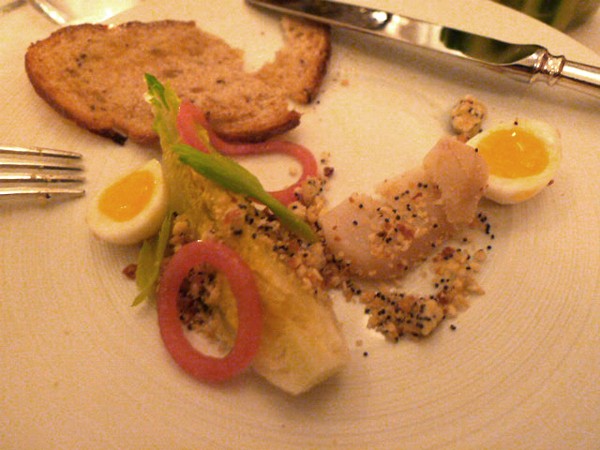 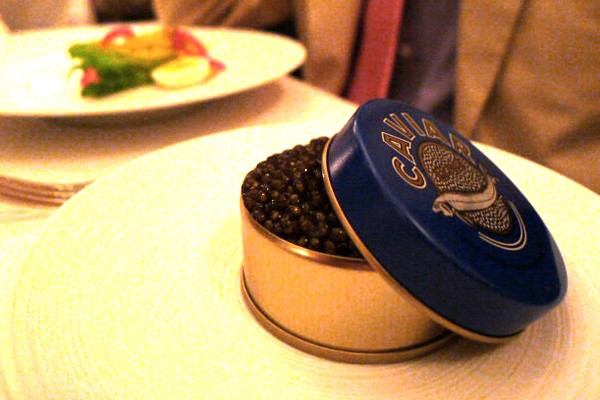 A summertime staple. Usually served on the beach. 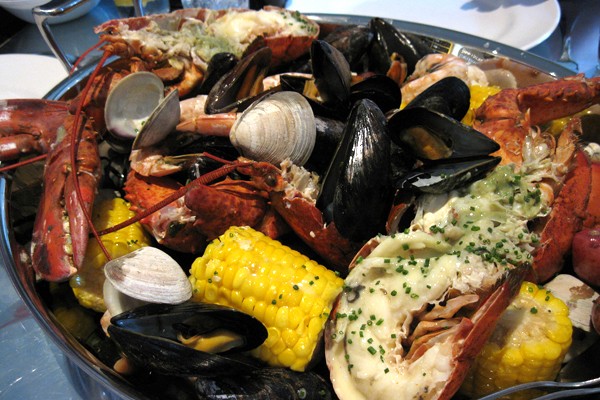 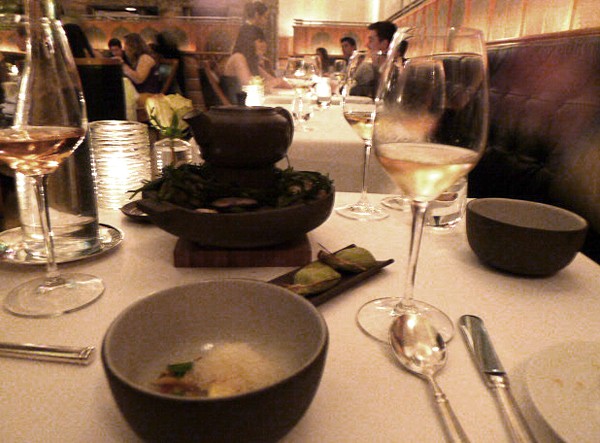 On the side: zucchini bread served in corn husks. 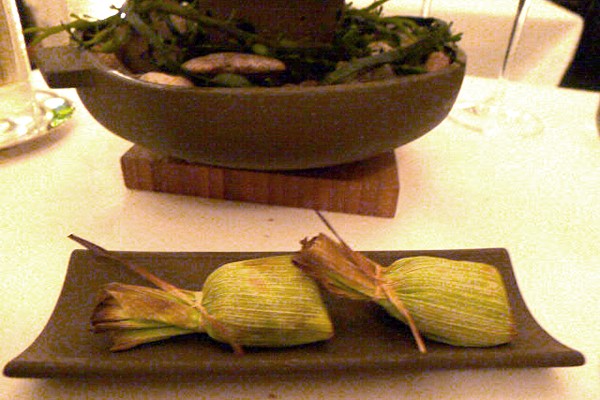 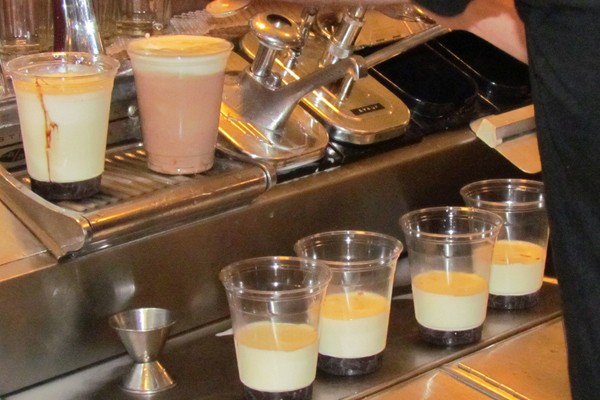 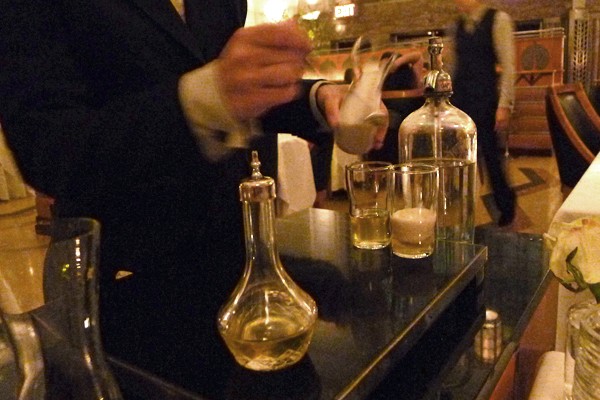 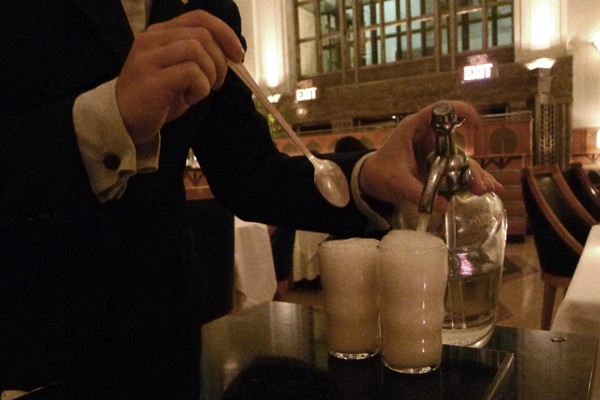 You can top it with blueberries, strawberries, whipped cream, or nothing at all. But it usually looks like a cake. 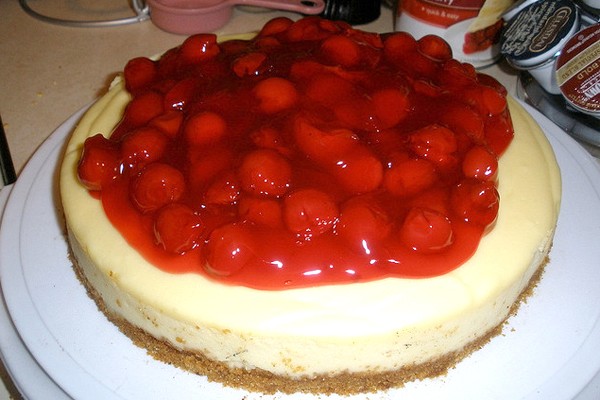 Eleven Madison Park deconstructs it into the essentials. Goat cheese, chamomile, and raspberry. 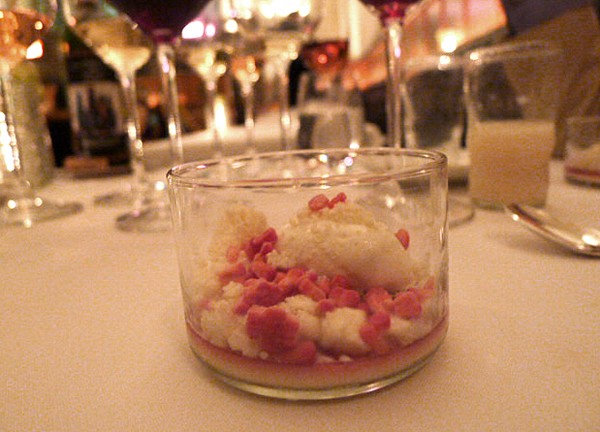 See how they do it at Eleven Madison Park and The NoMad, their other restaurant.

MORE INFO ON THE NEW MENU

A Restaurant of Many Stars Raises the Ante