You're a traveler with an incurable case of wanderlust. What do you do for the ultimate adventure? You move, and decide to live in the unknown.

DENVER – New York is the ultimate tourist destination — the center of the universe, a city constantly on the move. Millions of people flow in and out of the island daily, shops and bars come and go, and everyone is in a hurry to get somewhere and do something. It's an ever-changing pastiche where you can not only taste culinary wonders from all corners of the earth at any point of the day but also find a subway to take you to them. Everyone should experience New York, if not to live, then at least to visit.

But after ten years of calling myself a New Yorker, it was time to move from the city that never stops.

I had left the city many times — for weekend escapes and longer stints in Paris and Shanghai. After every trip, I returned wiser and changed — and relieved by the conveniences and distractions of New York.

What does it mean to move as opposed to travel? To travel suggests a round-trip ticket, a jaunt that removes you from your everyday surroundings and gives you new perspectives. Of course, in most cases, you only scratch the surface of places you visit. When you travel, the adventure is contained. There's an end date, an itinerary to check off. You eventually return home — hopefully with your horizons widened, though, for the most part, back to the comfort of familiarity.

To move implies that you aren't coming back and are unlocking a whole new side of yourself.

I decided to leave New York a year ago on a long night of walking the city from sunset to sunrise, from Union Square to Times Square to the southern edge of Central Park. What I saw that night was a seedy side of New York I always knew was there but had ignored. The dark underbelly of a beast emerged, burping trash at every step, cast in an endless light of flashing commercials. I walked the boundary between the uber wealthy and the uber poor, the contrast exaggerated by the height of the skyscrapers. As I worked my way up the avenues of the world's greatest urban jungle, I was reminded of what Zadie Smith wrote in her essay Find Your Beach: "The greatest thing about Manhattan is the worst thing about Manhattan: self-actualization." I felt the need to flee, for real this time, to discover myself outside the city that I had come to rely on as the one and only true reality.

I'm sure many people feel the stagnation of never leaving the place where they grew up in. At seventeen, I dreamt of moving to New York, of the certain success it would afford me. But the more I traveled, the more complacent I felt about calling myself a New Yorker, a citizen of the world. The more I traveled, the more I realized that New York is not the center of the universe. I wanted to discover more universes, even if I was too afraid to leave for good.

Moving is not easy. It's giving up what you know for something completely new. A one-way ticket seems like an impossible gamble. We're so bound by notions of having to do X job and are so familiar with X place that the idea of living elsewhere, where there is no set plan, is fraught with failure.

And yet. Is there any greater risk if we really want an adventure? To move is the ultimate form of travel. Because when we place ourselves in a new background, like chameleons, we have to change ourselves to adjust. 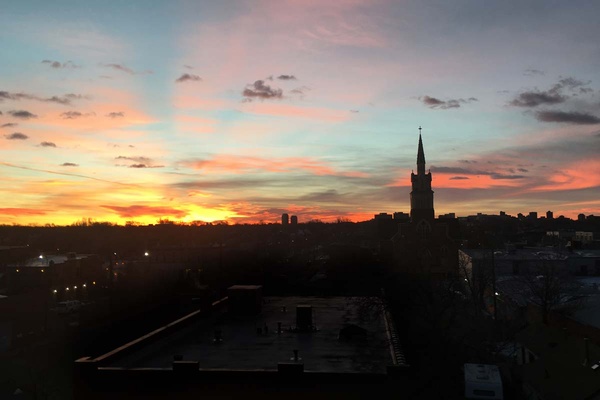 It's been over a week and a half since I arrived in Denver, one of the fastest growing cities in America. I'm completely on my own in a city where I don't know a soul. I arrived before the moving truck that holds everything amassed in the past twenty-seven years. Weirdly, I can't really remember which belongings I'm missing. I no longer feel defined by my things or where I'm from. I feel like a snake that has just shed its skin as the new one has yet to form.

The sunrises here are a different color than of those on the East Coast. I wake up early just to witness the daily miracle the locals must take for granted. For the first time in a decade, I feel like I'm on a real adventure because I don't know what will happen next or where I'll end up. Part of me already misses NYC and the life that I could have easily imagined continuing there.

But I am a traveler at heart, and the city that constantly moves couldn't keep me forever. When you leave with no plan to return, that's when the real adventure begins.

Forget Bucket Lists. This Is How to Have an Epic Road Trip
The Recipe for Gratitude in Burma
The Adventure Begins When You Hit the Dead End and Jump In