VOLCANOES NATIONAL PARK, Rwanda – The world was still in semi-darkness when we were awakened at 6 a.m. in the almost unknown African country of Rwanda and settled into vehicles to embark on one of the most magical encounters on our planet. To be honest, I do not think I slept the night before. My heart was beating wildly, wondering if years of walking the sidewalks of Chicago was enough to prepare me for climbing the mist-covered mountains that lay ahead.

In these mountains lay the Kingdom of the Gorillas, and on this day we were to be among the very privileged to have a face-to-face encounter with a gorilla troop living in the tropical forests high in the mountains. As we were handed walking sticks — did they think we were that old? — our guide gave a few instructions. We watched the tracker use a machete to cut a path ahead — just a little distracting to those of us who thought hiking meant following a groomed trail in a national park. As it turned out, we needed the walking sticks. There was thick mud, but having a boot sucked off now and then — well, it only added to the adventure. The climb itself was strenuous but doable.

When you are meeting a gorilla for the first time, you take in every word the guide tells you. There is a social etiquette that must be followed: Never look into a gorilla's eye, as it may be perceived as a threat. And keep a low profile, sitting on the ground, making little noise. Because there is a chance that a gorilla will come up and punch you, you are taught a few words in gorilla language. So you practice the guttural "gummmmmmm" that gorillas use to greet friends. The deeper "mmmmmmm" noise means, "I am a friendly gorilla, not a threat." We became quick experts at speaking gorilla. We had to: This could be a life and death experience.

I had to laugh. Another traveler told us about the time he accidentally propositioned his French teacher while innocently trying to say, "The cockerel went cock-a-doodle-doo" in French. "God forbid," he said, "if I ever made the same mistake when speaking gorilla." 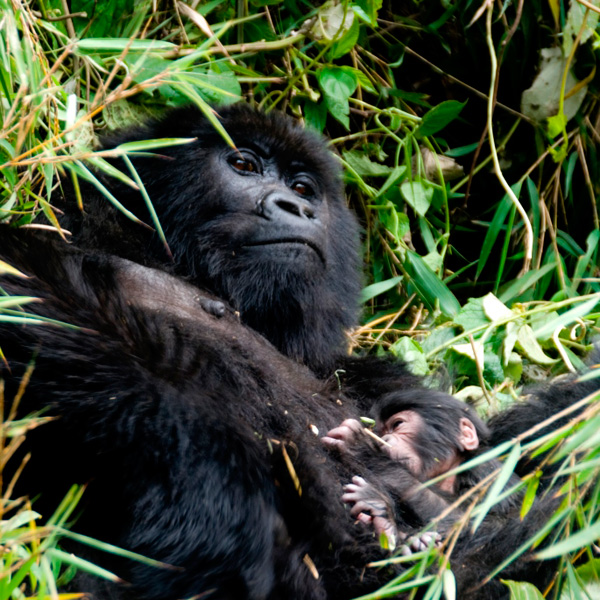 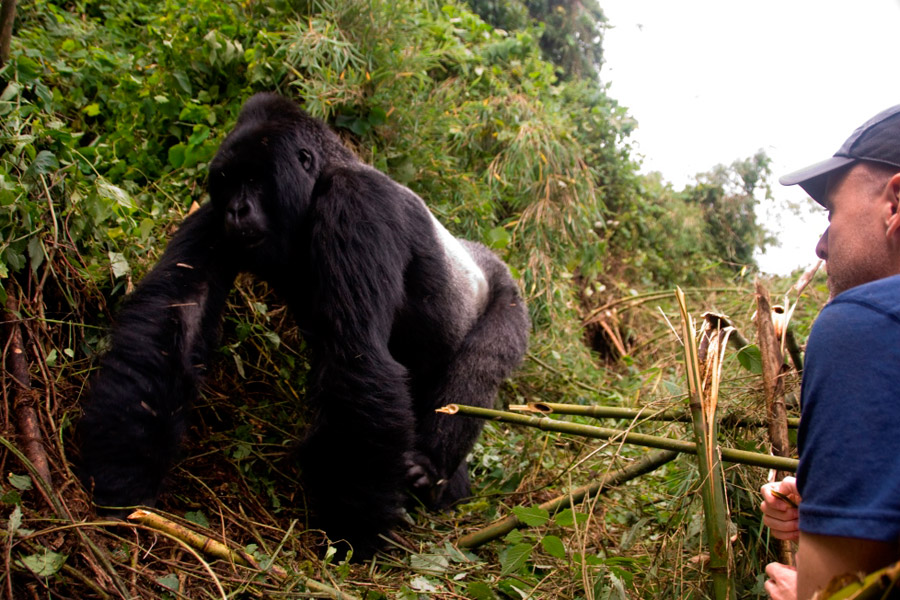 Five feet from a silverback.

We had arrived. And we were accepted into a community of gorillas of all ages without a sideways glance. We were introduced to their babies — a tear-jerking experience for all. We were only a few feet from them, clicking images that most only see in a David Attenborough special. The gorillas strolled past us as if we were part of the vegetation — which we tried to be.

The bond between the silverback and his females give the females protection — from predators and from males outside the group who might kill the babies. Males between the ages eight and twelve are called blackbacks and serve as backup protection. We were looking at a well-run society.

After what seemed like only ten minutes, our hour with the gorillas was up. We watched them on the move for their vegetarian feast, which followed its own ritual: climb bamboo tree, topple tree, start crunching, take nap.

We were silent on our trek down the mountain, caught in our own thoughts. Most of us have seen the wonderful Sigourney Weaver movie Gorillas in the Mist. Once seen, never forgotten. Years before, I had spent an incredible hour with Dian Fossey, whose lifework as a naturalist extraordinaire had been with gorillas. Just as Jane Goodall is known for her work with chimps, Fossey will be remembered for living with, and giving her life for, the gorillas. She once famously said, "The more you learn about the dignity of the gorilla, the more you want to avoid people." After that day with Dian, I knew that seeing gorillas face-to-face would be high on my life list.

At long last, my dream was satisfied. I worked, I schemed, I planned. I made it to those mountains in Rwanda, finding that it was in these mountains that magical encounters occur. Encounters of the forever kind, never to be forgotten.

Late June to mid-September is the ideal time, as the weather is drier.

Sabyinyo Silverback Lodge: Top rated of the few hotels for gorilla trekking. The lodge is situated at the foothills of the Virungas, the chain of volcanoes stretching in blue magnificence out your windows. There are guest cottages with fireplaces and a beautifully appointed main lodge. The food is great, the staff is extra accommodating, and the location is the closest to the trek's start point.

A Serengeti Sonnet
Uganda on Safari: The Pearl of Africa
Night Falls in Africa

Joan Larsen is a regular Fathom contributor. A version of this story originally appeared on Forming the Thread and is reprinted here with permission.

Special thanks to Chris Lin from The Everyday Magic for the fantastic photos.